The standard of punting in the NFL is at the highest level we’ve seen, with our data and grading stretching back to the start of the 2006 season. We’ve seen a rookie phenom emerge in Seattle’s Michael Dickson, while Baltimore’s Sam Koch continues to deliver at a high level. Pat McAfee went out on a high, retiring after finishing the 2016 season as our highest-graded player at the position. As good as they have all been, our 2018 PFF Special Teams Player of the Year has been the highest-graded punter in the NFL for the past two seasons, and he ranked second in 2016 too. The winner of the award this year is none other than New Orleans Saints punter Thomas Morstead. 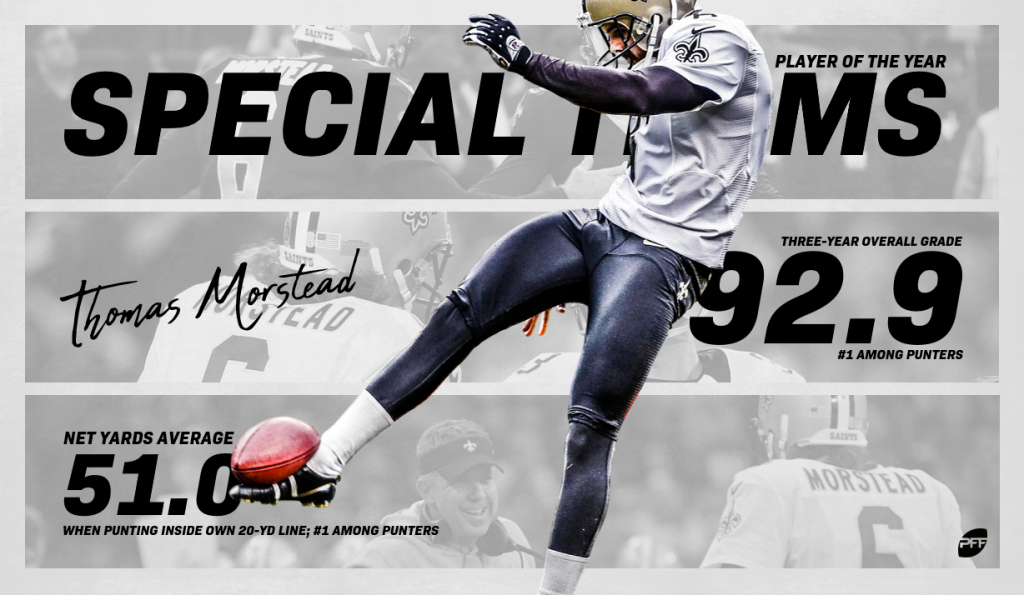 Morstead punted just 50 times in the regular season and playoffs this year, the second-fewest punts by a punter to play the full season next to Johnny Hekker of the Los Angeles Rams, but he was consistently impressive when he did punt. Morstead led the NFL in net yard average, PFF grade, and average hang time. In the offseason, we covered what goes into grading punting in the NFL, but to put it simply, we go beyond the box score with things like hang time, location, and the type of punt all going into each grade. Standard stats can lie, or at least skew the perspective of punters somewhat, but when you see a player like Morstead ranking as the best in the league in net yards and average hang time, it’s a safe bet that his PFF grade is going to be up there too. 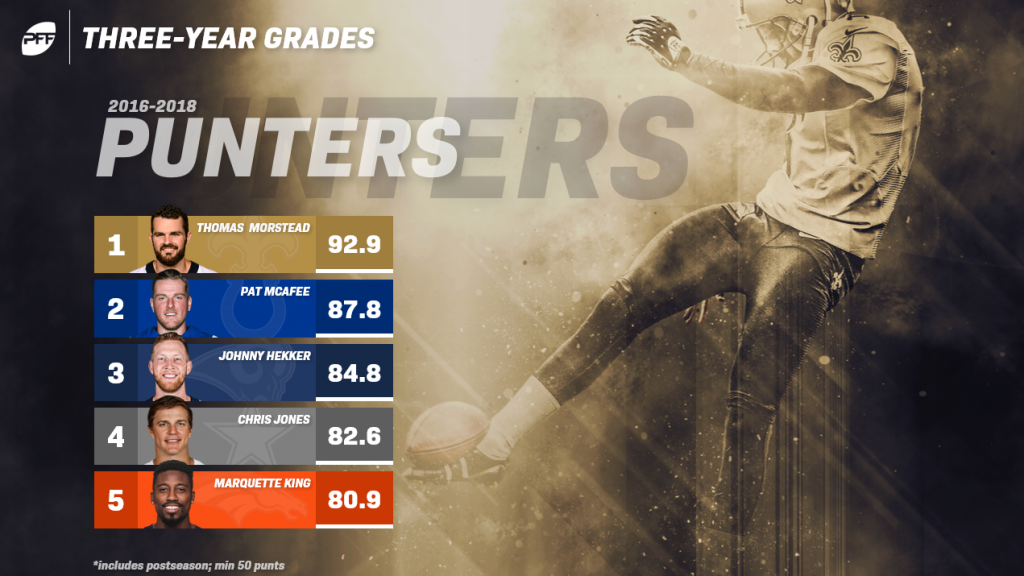 What makes Morstead so special is that you can look at the various situations he faces as a punter, and he continues to excel regardless of what he’s facing. The Saints needed to punt from inside their 20-yard line just four times in 2018, but when they did, Morstead’s 51.0 net yards average was a full 2.2 yards higher than the next closest punter. That might not seem like a huge deal, but when you consider that we often view a team punting from inside their own 20-yard line as a big opportunity for the opposing offense to start their next drive inside the punting team’s half, having someone like Morstead to take that away is a huge win for the Saints.

Morstead and the Saints' punt coverage unit allowed an average of just 4.3 yards per punt return in 2018, the second-best mark in the NFL. It’s important to note that yards per return isn’t just a stat for punters or the coverage unit, but rather a good indication of how they work together. Such a low number indicates that Morstead didn’t often outkick his coverage, and his coverage unit rarely allowed the returner to beat them for significant yardage.

Thomas Morstead does a great job when it comes to narrowing the field for punt returners (or taking it away entirely). pic.twitter.com/0IcvIG55IX

A look at some of Morstead’s punts from the 2018 season shows how his boot plays a role in that number. His ability to pin the returner between the numbers and the sideline drastically narrows the field for the returner, allowing the coverage unit to swarm to the ball if the returner hasn’t already opted to call a fair catch.

Punting might not be the topic that gets a lot of people excited (this writer excluded, obviously) but the level Morstead has performed at over the past three seasons has kept him ahead of his peers, and that is why he is the 2018 PFF Special Teams Player of the Year.