Punters Are People Too.

It was a clever phrase created by NFL Network’s Rich Eisen to celebrate one of the lesser-heralded positions around the NFL. Frequently, the phrase gets brought up to highlight a punter who makes a tackle or picks up a first down on a trick play, but at it’s heart, it is meant to highlight how important punters are to the field position battle, and how that impacts the outcome of games. Consider this stat from our PFF Forecast team of Eric Eager and George Chahrouri: The Expected Points Added (EPA) on a drive that starts at the five-yard line is -0.723, compare that with an EPA of 0.639 on drives that start at the 20-yard line and it’s clear just how important it can be to have a punter who can trap opponents close to their goal line.

So how do we grade, and why are PFF grades the best method of measuring a punter’s performance?

The easiest way to describe how we grade punts in the NFL and in college, is to explain that we apply the same core principle that we apply to the way we grade every position on the football field. We’re not grading the outcome of the play, we’re grading the individual player performance on the play. While a punter might see his box-score numbers impress on a play where the punt returner loses the ball in the lights, leading to it bouncing a further 25 yards downfield, that doesn’t factor into the PFF grade. We owe a lot of thanks to our punt grading system to former Minnesota Vikings punter Chris Kluwe who worked with us to convert his points-based score into our positive- and negative-grading system.

When we grade a punt, we look at a number of key factors on the play:

Type of punt: The two main punting types are open field and coffin corner punts. Generally, this is in relation to where on the field the punter is punting from. If the team is back at their own 20-yard line, the chances of the punter dropping the ball inside the opposing 10-yard line (coffin corner) are slim, so we don’t expect punters to make that happen on those plays. Similarly, on a play from their opponent's 48-yard line for example, we’re not looking for a booming 60-yard punt (this would be considered a negative due to the fact that it would have landed somewhere beyond the end zone) and rather would like them to drop it as close to the end zone as possible without resulting in a touchback.

Distance: On open field punts, ideally you want the punt to go as far downfield as possible without sacrificing hang-time or outkicking your coverage. On coffin corner punts, it’s less about the overall distance and more about the location in relation to the end zone, and involves a fine balance for the punter. Too far from the end zone and you’re giving up field position, too close to the end zone and you are limiting the chance for the ball to be downed inside the five-yard line.

Hang time: The higher the better. The longer the ball is in the air, the more time your coverage unit has to get in position to prevent any return or to down the ball close to the goal line. Obviously you don’t want to sacrifice too much distance for this, but it is one of the most effective ways to force fair catches and limit returns.

Impact point: Important on coffin corner punts, this is in relation to where the ball bounces. It’s a common misconception (mainly because it makes a nice highlight-reel play) that bouncing the ball at the one-yard line is the pinnacle of punting. While it looks impressive, you are much more likely to down the ball inside the 10-yard line with a ball that bounces at the five-yard line than one that bounces at the one-yard line. That’s because the closer the ball is to the endzone, the less chance you have to down it if it bounces or rolls forwards.

Location: A standard football field is 53 1/3 yards. That’s a lot of pace for a returner to look for a crease to create a big play and turn a game on it’s head. That’s why punters will often look to use the sidelines. By pinning a returner close to the sidelines, it becomes much easier to prevent a big play coming back the other way.

So that’s what we’re looking for when we grade punts, but why are our grades the best method for evaluating punters?

This should surprise absolute nobody, but basic statistics often do not capture the full picture on any given season, game or even play. Punting is no different as we will showcase in the play example below.

Writing up an article on how we grade punters in the NFL. Box score tells you this is a 36-yard net punt with a touchback. What it doesn't tell you is that Morstead drops the ball at the Vikings five-yard line, and between the numbers and the sideline. pic.twitter.com/VGaEs6q8Un

On paper this is a 56-yard punt, but just a 36-yard net for the New Orleans Saints because the ball goes into the end zone for a touchback. We’re taught that a touchback is the result of a bad punt, and while that’s true, it’s important that we differentiate between a play that doesn’t work out for the punting unit and the performance of the punter himself. The ball leaves Morstead’s foot at the Saints own 34-yard line and lands at the Minnesota Vikings five-yard line. The bounce is a little bit unlucky, but the key here is the Vikings punt returner slowing down the right gunner for the Saints and forcing him to take his eye off the ball. Were it not for that, there’s every chance that the Saints could have downed the ball inside the five-yard line, dramatically shifting field position on the next drive. 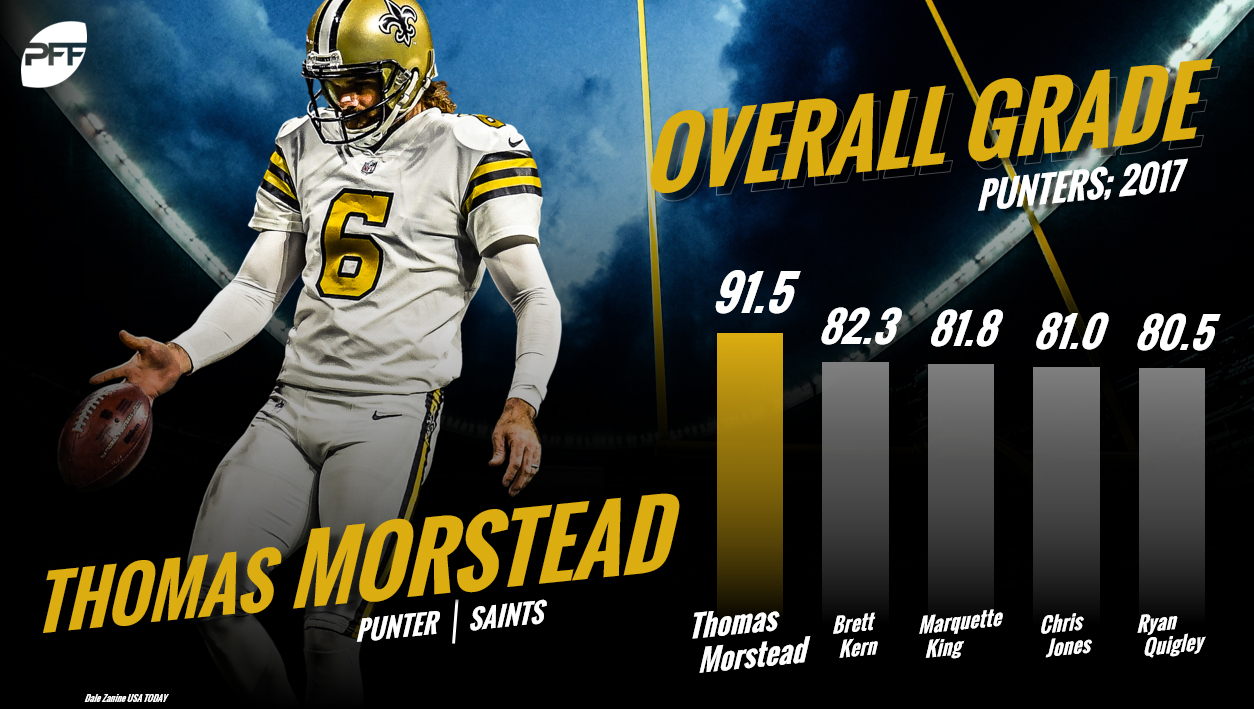 In our grading system, this is a +1.5 punt by Morstead. The distance (51 yards from the line of scrimmage to impact, and 61 yards from where he kicks it) is good, as is the fact that he’s able to drop that ball at the five-yard line. That means that when the ball bounces, even if it’s bouncing forwards, there is the opportunity to keep it out of the end zone. The other key here is the horizontal location. The ball lands between the numbers and the sideline, which is important because it limits any potential return from the Vikings. With the ball so close to the end zone it’s unlikely that they are going to attempt to return it, but if they do, putting the ball so close to the sideline leaves them less room to work with. In the box score, this punt doesn’t warrant much attention and could be viewed as a negative.

Using our grading system, Morstead gets credit for what was a very impressive punt.

The good news is that our grading system gives you the most accurate picture of a punter’s performance that you can find. The better news is that punter grades will be available with PFF Premium Stats 2.0, which is scheduled to be available in August.