The Pittsburgh Steelers continue to dominate in the trenches, selected as PFF's Offensive Line of the Year

It's no secret that the Steelers' offensive line has been one of the league's most dominant units over the last couple of years, and with the Pittsburgh line putting together another impressive season in 2018, they have earned PFF’s Offensive Line of the Year award. The unit, which mainly featured left tackle Alejandro Villanueva, left guard Ramon Foster, center Maurkice Pouncey, right guard David DeCastro and right tackle Matt Feiler, was especially outstanding in pass protection as the Steelers earned the second-highest pass-blocking grade in the NFL over the 2018 season. 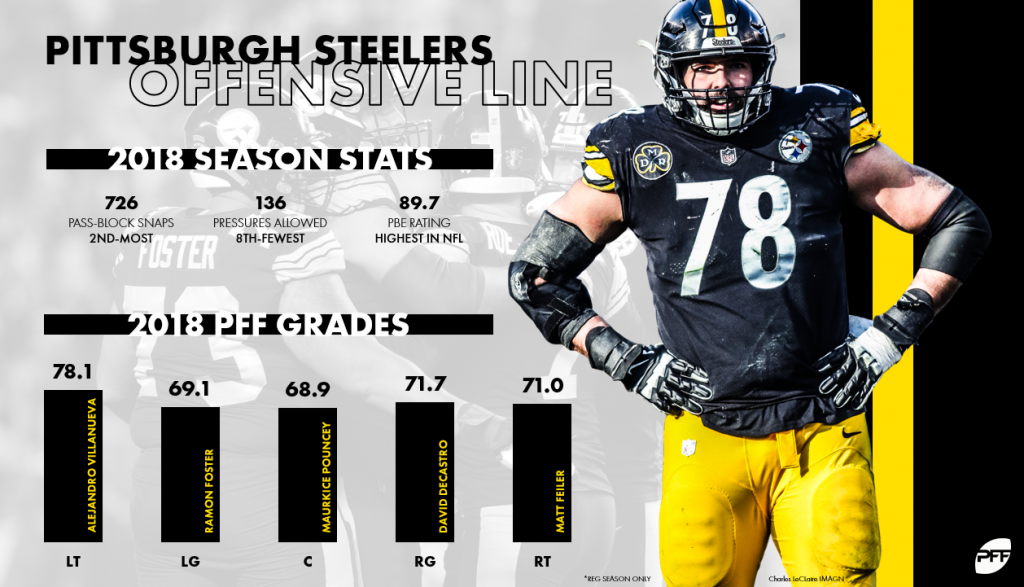 With such a strong lineup, it’s no surprise to anyone that the Steelers offensive line also produced the highest cumulative pass-blocking efficiency rating at 85.5 – which was the highest rating for a unit since the 2015 Dallas Cowboys – as the Steelers allowed the eighth-fewest total pressures despite notching the third-most passing plays this year (726, just three shy of the most). In addition, the unit tied for the fourth-fewest sacks allowed with 13, and all three offensive lines that allowed fewer sacks also had to pass block on far fewer plays. Furthermore, Pittsburgh's quarterback Ben Roethlisberger was under pressure on just 24.3% of his dropbacks this year, which was the lowest rate among all quarterbacks.

While they were more impressive in pass protection, the Steelers' offensive line also made plays in the running game, as the team finished in the top half of the league in run-blocking grade. The unit played a big role in the emergence of backup running back James Conner, who was able to gain yards on the ground easily in the absence of Le'Veon Bell. Although the Steelers did not run too often – they had the second-fewest run plays this year – they were still efficient, as 23.0% of their runs resulted in either a first down or a touchdown, which was tied for the 11th-best rate in the NFL. Conner can also be thankful for his offensive line, as he gained an average of 1.67 yards before contact which was the fifth-highest figure among the 14 running backs who tallied at least 200 carries in the 2018 regular season.

One significant strength of the unit was that even though they were marred by injuries and lost starting right tackle Marcus Gilbert and even had to play without right guard David DeCastro for a while, you still could not see a significant drop-off in the line’s performance. Backup right tackle Matt Feiler and backup right guard B.J. Finney both stepped up when their numbers were called, and they both showed enough potential for Steelers fans to be optimistic about the unit’s depth going forward. In fact, that depth may well be tested shortly, as Ramon Foster’s contract set to expire. However, the biggest influencing factor on the unit’s future might be the departure of offensive line coach Mike Munchak, who left for Denver in January. Regardless, we are still looking forward to seeing if the Steelers will have the best offensive line in the NFL once again in 2019.