Moved into a feature role with the departure of Jay Ajayi halfway through the season, Miami Dolphins running back Kenyan Drake put together a career year riddled with exceptional single-game performances, including his Week 13 duel with the Denver Broncos’ defense.

Lifting Miami to a 35-9 victory over the Broncos, Drake totaled 141 yards and a touchdown on 26 total touches (5.42 yards per touch) and forced a Week 13-high nine missed tackles along the way. He also earned 106 of his 120 rushing yards (88.3 percent) after contact and recorded a sky-high 159.5 elusive rating, all of which fed into his 95.9 overall grade – the highest single-game grade for a running back in all of 2017 (includes postseason). 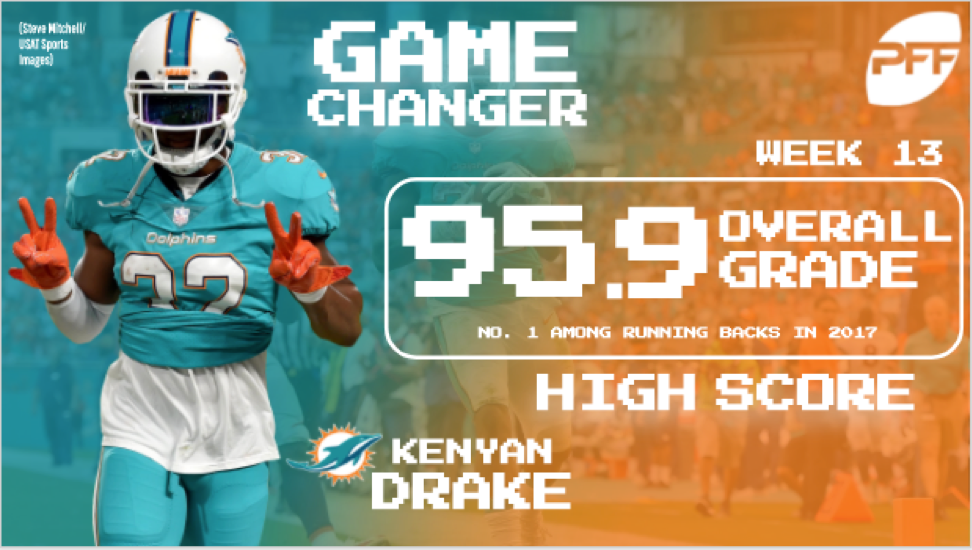 Fueling his high yards after contact numbers, Drake was contacted within two yards of the line of scrimmage on 18 of his 23 runs (78.3 percent). Also, he had 36 rushing yards ripped away from his box score production due to three holding penalties at the hands of the Dolphins’ offensive line, and on all three of the runs, he was contacted either at or behind the line of scrimmage.

This was easily his best run of the contest:

Drake’s stunning performance marked the start of a steady ascent, as he earned 75.0-plus overall game grades in three of his next four games, en route to a career-high 80.9 overall season grade (tied for 17th among qualifying running backs). Shockingly enough, his bludgeoning of the Broncos was also the first game in his NFL career that he earned 10 or more carries.

A product of Alabama’s factory line of NFL-caliber running backs, Drake has always been an afterthought amidst a committee of talented ball carriers. In Tuscaloosa, Drake never totaled more than 100 carries in any of his four seasons with the Crimson Tide, as he worked behind a combination of Derrick Henry, Eddie Lacy and T.J. Yeldon all throughout his career. Miami, of course, treated him similarly early in his career after taking him in the third-round of the 2016 NFL Draft, as he totaled just 37 carries across his first 22 games in the NFL.

As previously mentioned, the Dolphins finally broke the cycle and increased Drake’s workload significantly against Denver, handing him the ball a career-high 23 times. Of course, his strong play kept Miami from turning back to their old ways.