No stranger to significant praise and appreciation, New England Patriots tight end Rob Gronkowksi has often dominated his opposition on a season-to-season basis when healthy. And by no surprise, the 6-foot-6, 265-pound game-wrecker also had the best single-game performance by a tight end in 2017, earning a perfect 99.9 overall grade against the Pittsburgh Steelers in Week 15. 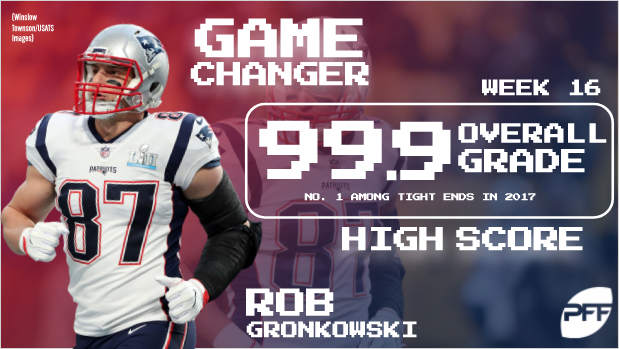 Gronkowski caught 9-of-10 catchable targets for 168 receiving yards in the contest, including two big receptions on the Patriots’ game-winning drive in the fourth quarter. In addition to making myriad tough catches in tight coverage, he forced two missed tackles on the day. Also, all nine of his receptions either moved the chains or put points on the board (including a two-point conversion), eight of which went for 10-plus yards.

New England’s coaching staff seemingly targeted a clear weakness in the Pittsburgh secondary, as Gronkowski did a majority of his damage against Steelers safety Sean Davis. Gronk caught 8-of-9 targets for 158 of his 168 receiving yards against Davis, who earned a paltry 22.3 game grade for his efforts, easily his worst game grade of the season and the 10th-lowest game grade among all NFL players in 2017.

Of course, a breakout game at the hands of Gronkowski is expected to coincide with significant receiving production, but pushing him ahead of the pack was actually his run-blocking performance. He earned an 88.9 run-blocking grade against Pittsburgh, easily his best single-game run-blocking grade of the season and the eighth-best for a tight end all season.

Gronk was fittingly only topped by himself on this list and followed up his big Week 15 with a nearly-as-big Week 16.

Watson had 3.96 yards per route run and backed that up with an 88.5 run-blocking grade.

Ertz had five first-down receptions in the game, four on third down, and he caught four passes on Harrison Smith, the highest-graded safety in the NFL in 2017.

Brate generated a 151.5 passer rating when targeted in this game, the best on the team that week.