NFL free agency doesn't officially open until March 16, but that didn't stop teams from getting a sizeable headstart on roster-building this past week, with the Green Bay Packers re-signing longtime quarterback Aaron Rodgers and the Denver Broncos trading for star quarterback Russell Wilson.

The “legal tampering period” of free agency will begin on Monday, March 14, bringing with it the most crucial part of the offseason. A franchise's decisions within the next few weeks will shape its direction for the next two years.

Naturally, the most important task for teams during the offseason is to build a team of talented players for the next season. While good drafts facilitate long- and mid-term success, some stellar personnel moves in free agency or via the trade market can spark a quick turnaround or make a good team even better.

Look no further than the Buffalo Bills as a recent example, as the aggressive offseason moves — like the trade for wide receiver Stefon Diggs — fuelled the postseason runs of 2020 and 2021 and made them arguably the best team of the 2021 season.

Meanwhile, the Cincinnati Bengals drafted Joe Burrow and Ja’marr Chase, core players for years to come, but their 2021 Super Bowl run wouldn’t have been possible without their free agency signings. Their six most valuable players, according to PFF WAR, include Chidobe Awuzie, Mike Hilton and Vonn Bell  — all of whom were signed in the 2020 or 2021 offseason. Other recent free agents who made a significant impact for Cincy last season include Eli Apple and D.J. Reader.

In this article, we want to highlight the teams that have successfully signed valuable contributors and those that have failed to get value out of their investments.

To get a complete picture, we'll look at free-agency signings, re-signings and trades at any point in the offseason — any time a team adds a non-rookie player to their roster. We will discount extensions for players who still have a year or more left on their contract.

We will measure the success of these personnel moves with the help of PFF WAR, which gives us an accurate indication of the value the signings and trades contributed on the field in terms of wins.

Since the goal of free-agency signings and player trades is an immediate improvement, we only look at the first two years and use the greater WAR in these two seasons to measure success. For one-year contracts, we will use the WAR for that season.

Whenever we attempt to identify the teams that got the most on-field value out of their personnel moves, we also have to talk about cost. The natural way to look at the cost of free agency moves is in cap dollars.

To get a reasonable comparison of free agency moves in the 2020 offseason compared to the 2014 offseason, we will translate the APY (average dollars per year) value of contracts to the percentage of the total cap space a team was granted at the year of the signing.

The total cost of a trade is the contract cost of the player in the first two years for his new team — or only the first year if the player remained on the new team for only one year — plus the trade cost in salary cap dollars. Again, we will work with percentages of the total cap space to compare trades in different years.

With the cost and value of each personnel move established, here is a chart for all moves including non-quarterbacks since 2013: 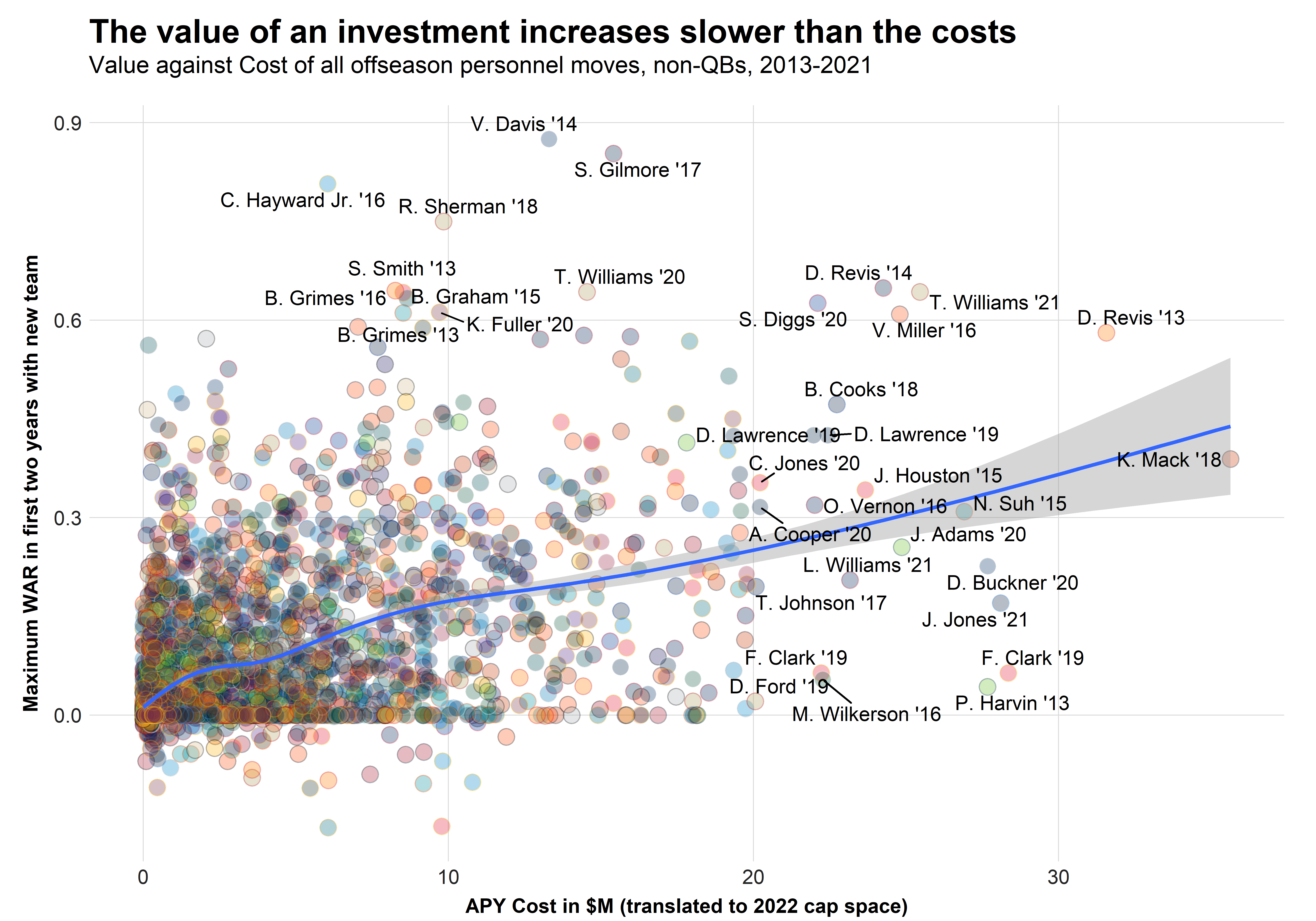 While a greater investment also leads to a greater return on average, it’s apparent that there are diminishing returns for investments with an APY greater than $10M.

We can also look at quarterbacks, and it’s not surprising that the Buccaneers signing Tom Brady was the best quarterback signing in recent history. 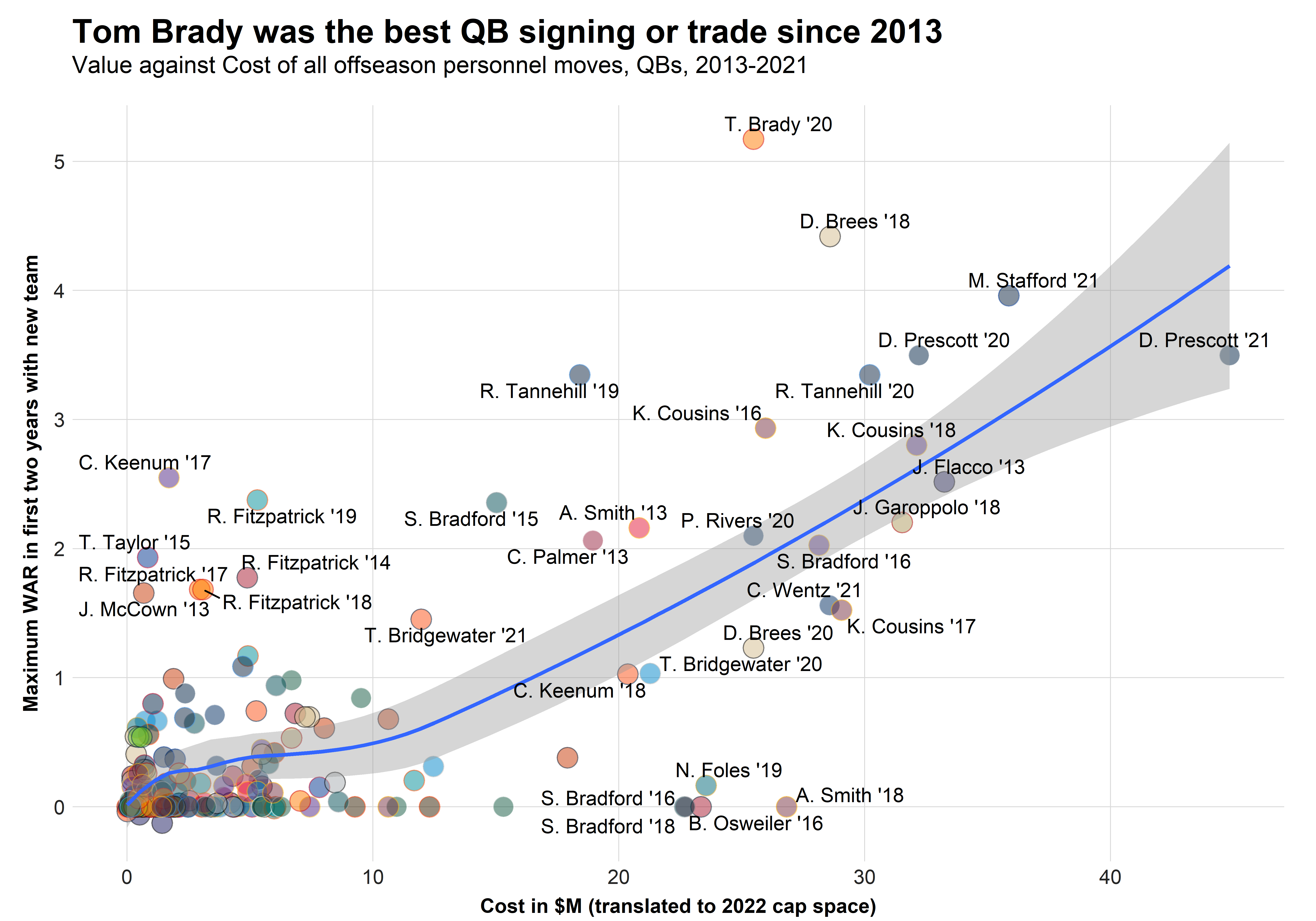 The best teams in free agency

Since the WAR values of quarterbacks are so much larger, we will perform the remaining analysis without quarterbacks.

We start with looking at the best teams since 2013: 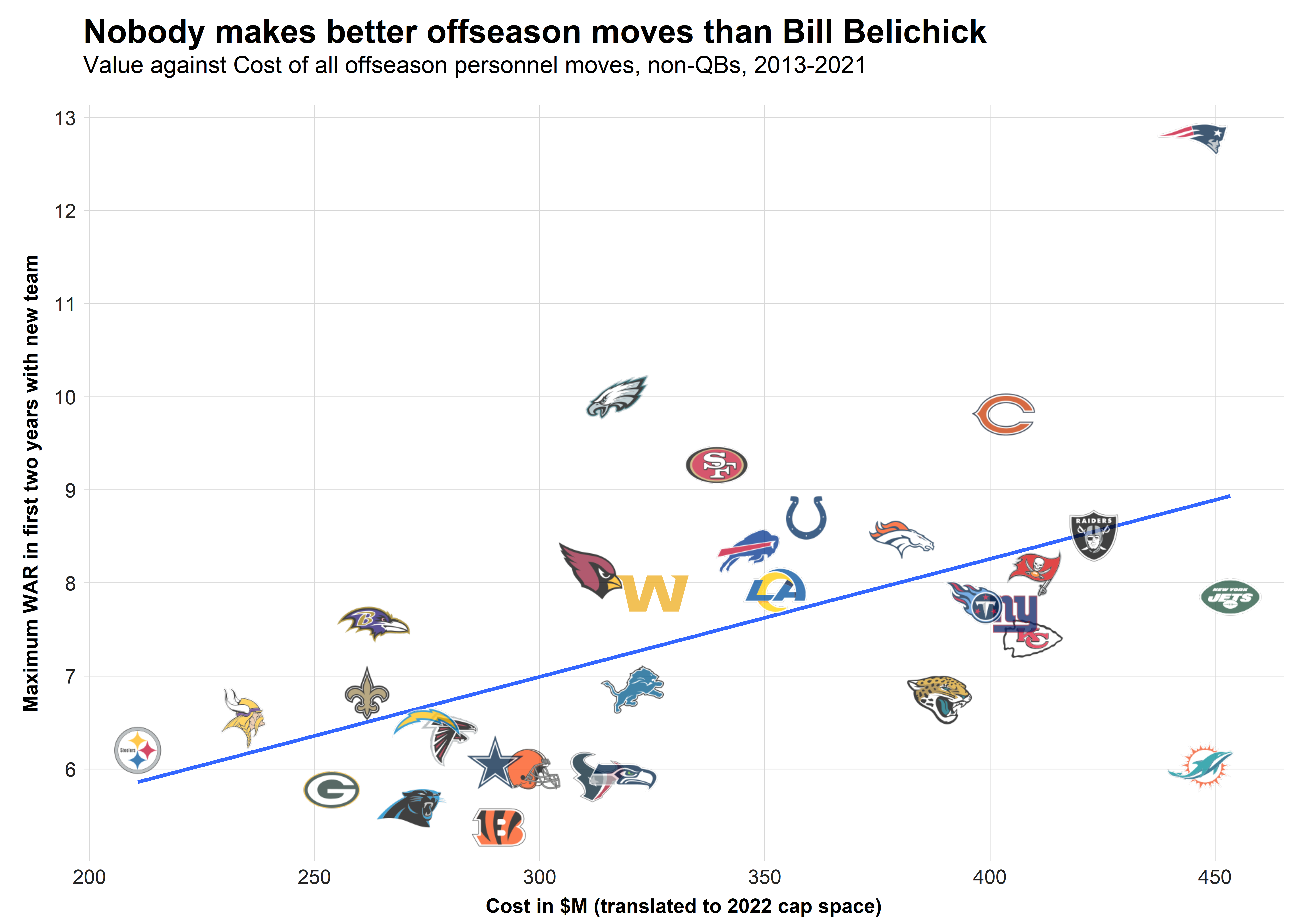 Nobody got more value out of their investments than Belichick since 2013, with excellent value signings and trades for players such as Darrelle Revis, Julian Edelman, Jason McCourty, Devin McCourty, Patrick Chung, Martellus Bennett, Jabaal Sheard and Adrian Phillips.

Philadelphia Eagles general manager Howie Roseman has also been very successful with his offseason moves. His reputation has stagnated due to Carson Wentz’s demise, but he is still one of the best GMs in the league and probably underrated right now.

From now on, we will focus on the last five offseasons to look at more recent success. The following chart shows the best offseason classes from all teams: 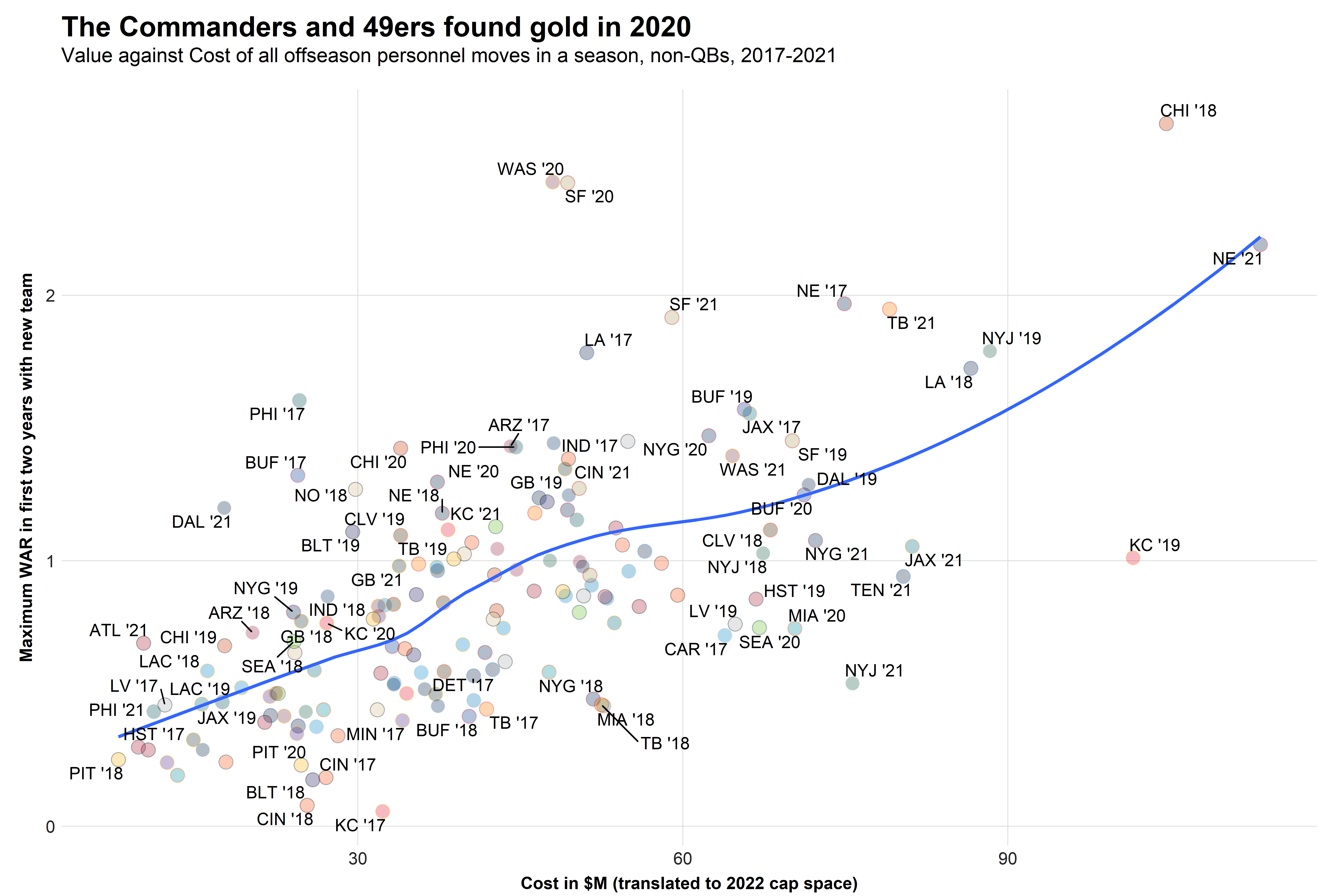 We can see the 2021 Cincinnati Bengals are among the teams that got more value out of their investments than one would expect. It’s also noteworthy that the San Francisco 49ers had two very good offseasons in a row, a large reason why they almost made the Super Bowl despite starting a mediocre quarterback on an expensive veteran contract.

Meanwhile, the Washington Commanders also had an excellent offseason in 2020, adding or re-signing Kendall Fuller, Ronald Darby, Logan Thomas, Brandon Scherff, Wes Schweitzer and others as valuable pieces to their roster. While the defense had a down year in 2021, the Commanders are probably still only a good QB away from contention.

Looking at the best teams since 2017, it sticks out that the 49ers had the best offseasons, illustrating that Kyle Shanahan and John Lynch have done a very good job identifying players that fit into Shanahan’s system. 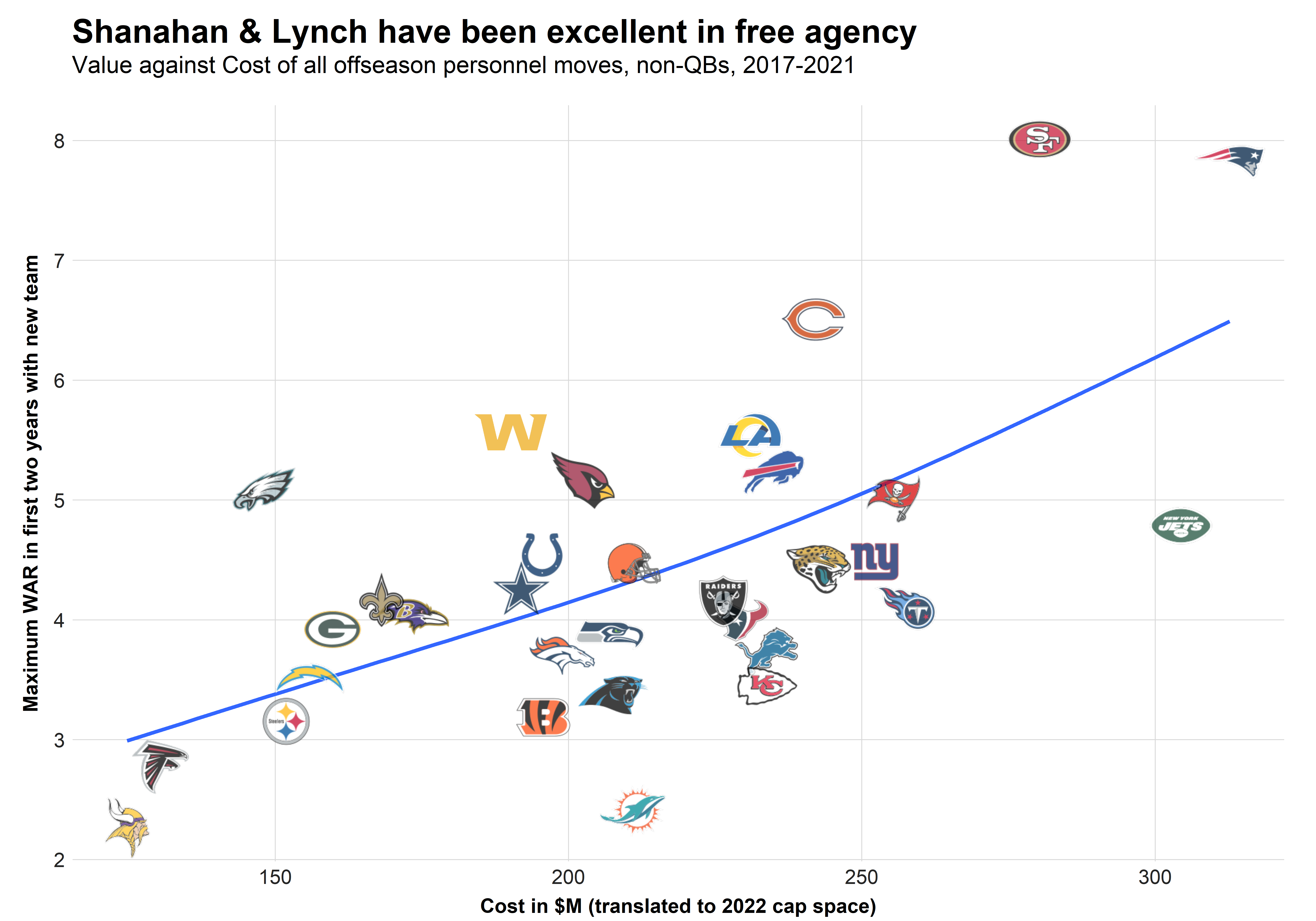 An alternative way of measuring costs

After assessing costs in salary cap dollars, another way of looking at personnel moves is whether a player generated more value after the signing than before.

To do that, we compute the WAR of each player in the year before he signed or got traded and compare that number to the value the team got out of him after the move (measured the same way as above).

The following chart show all offseason classes from that angle: 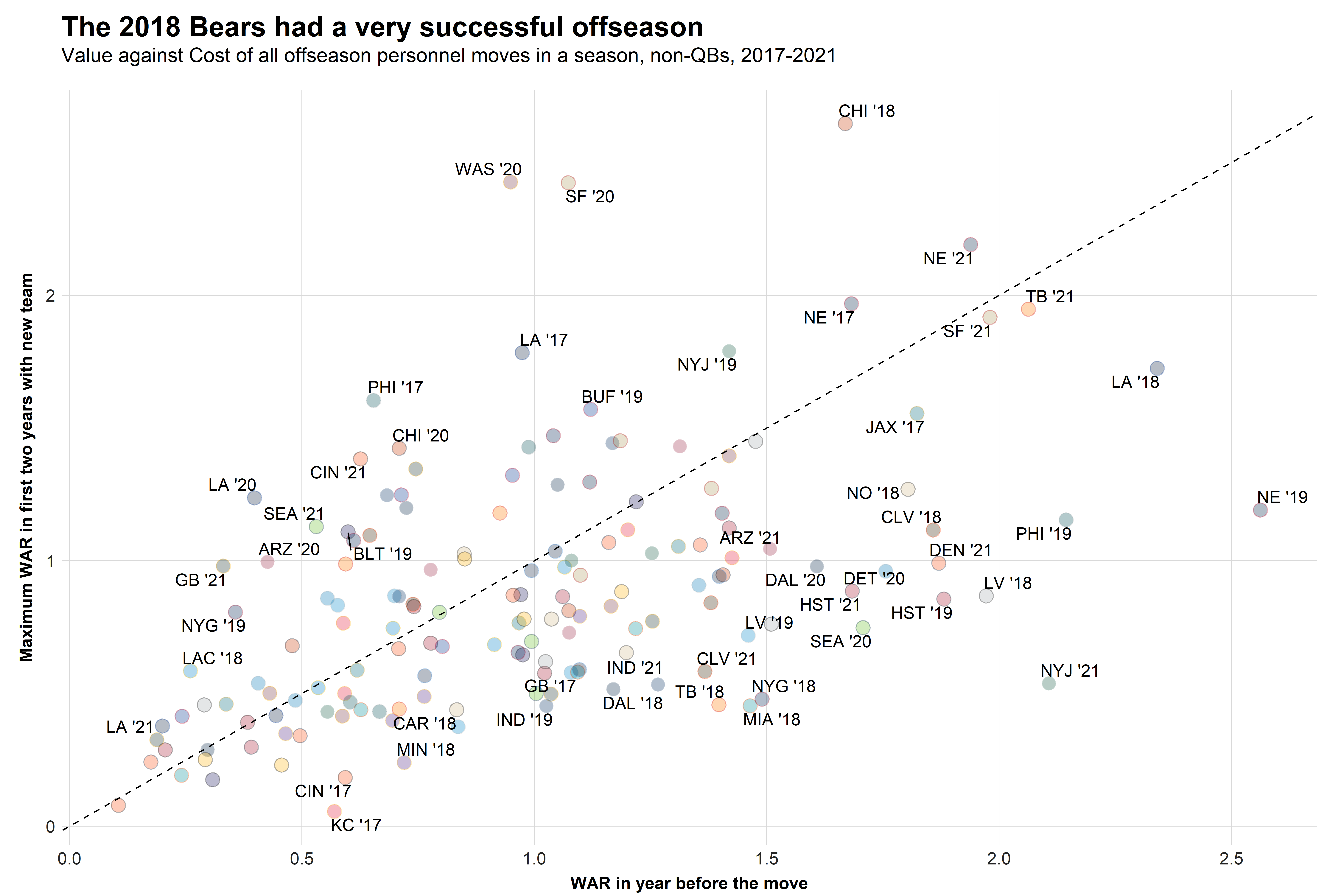 The 2020 Commanders and 49ers still stand out, but this chart also shows how good the Bears‘ 2018 offseason was. All things considered, Khalil Mack was probably too expensive, but Kyle Fuller, Prince Amukamara and Allen Robinson II were valuable investments, and all three of them generated more WAR than in 2017. 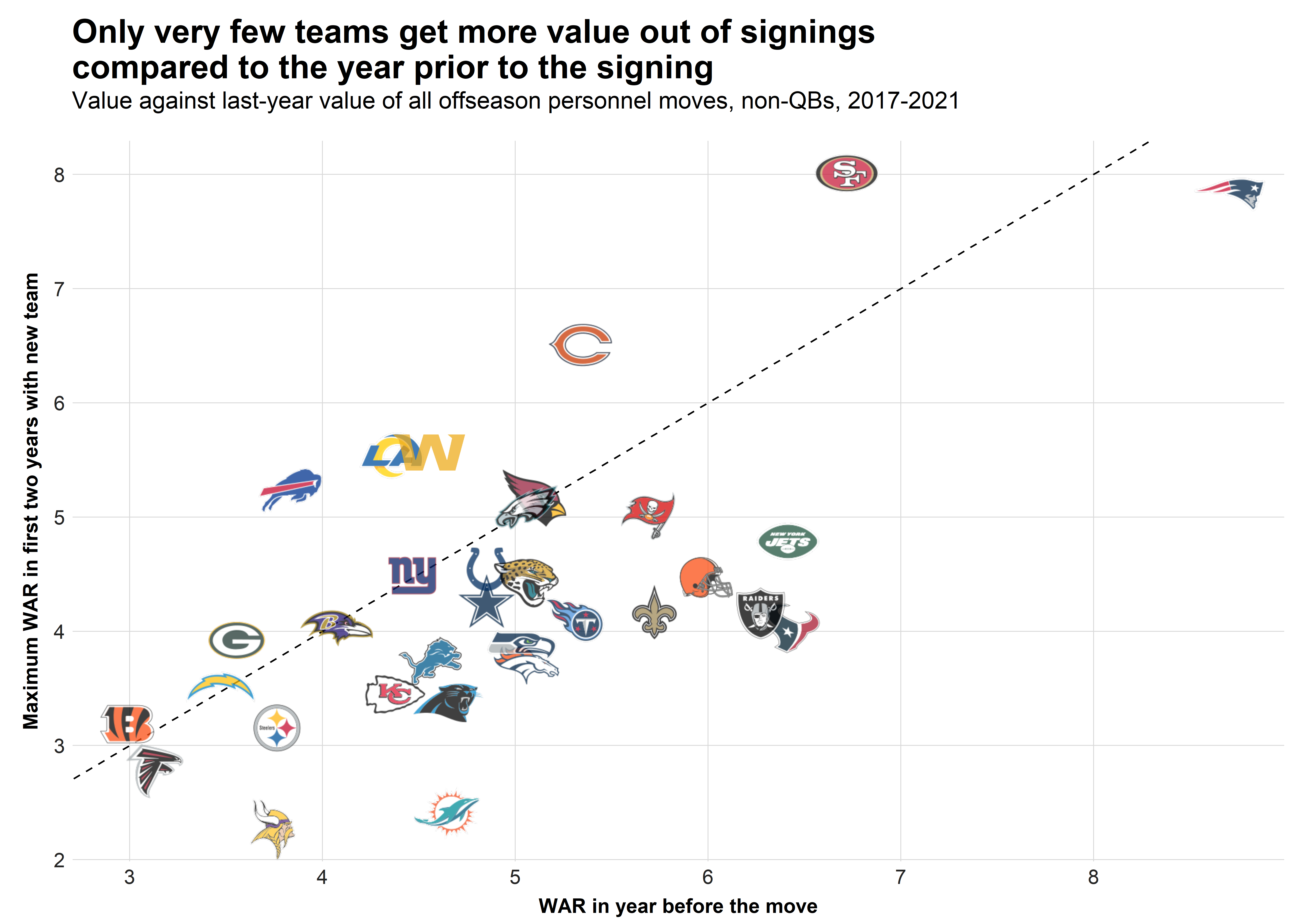 It’s noteworthy that most teams get less value from their signings when we compare it to the value the same players generated a year prior, a phenomenon we investigated last year.

It’s noteworthy that this is even the case when measuring the value with the maximum WAR of the first two years with the new team, i.e., the player has two chances to surpass the value he had with his old team.

This goes to show that the winners of next week’s free agency frenzy will probably not be the teams that made the splash signings but rather those who find valuable contributors for little or medium money.