The top DFS plays for Week 1 of the preseason

It’s Week 1 of the NFL preseason. For all of you daily fantasy football junkies out there, now is your time to make some serious cash. Preseason DFS is tough, but also really easy — if that makes any sense.

You don’t want to play any name-brand guys. Players like David Johnson and Le’Veon Bell aren’t going to see any work, but for whatever reason, you’re going to be seeing a lot of lineups with those sorts of players (scoring zero points). So, it’s easy for that reason.

Here’s why it’s hard. Preseason DFS is nothing like regular-season DFS. Stats matter less. Matchups don’t really matter at all. Projecting playing time matters more than anything else. You have to do a lot of research, scouring depth charts, tracking injuries, and catching up on news from beat writers out of camp. If you put in the time, the money should follow. Luckily, I’m here to help. 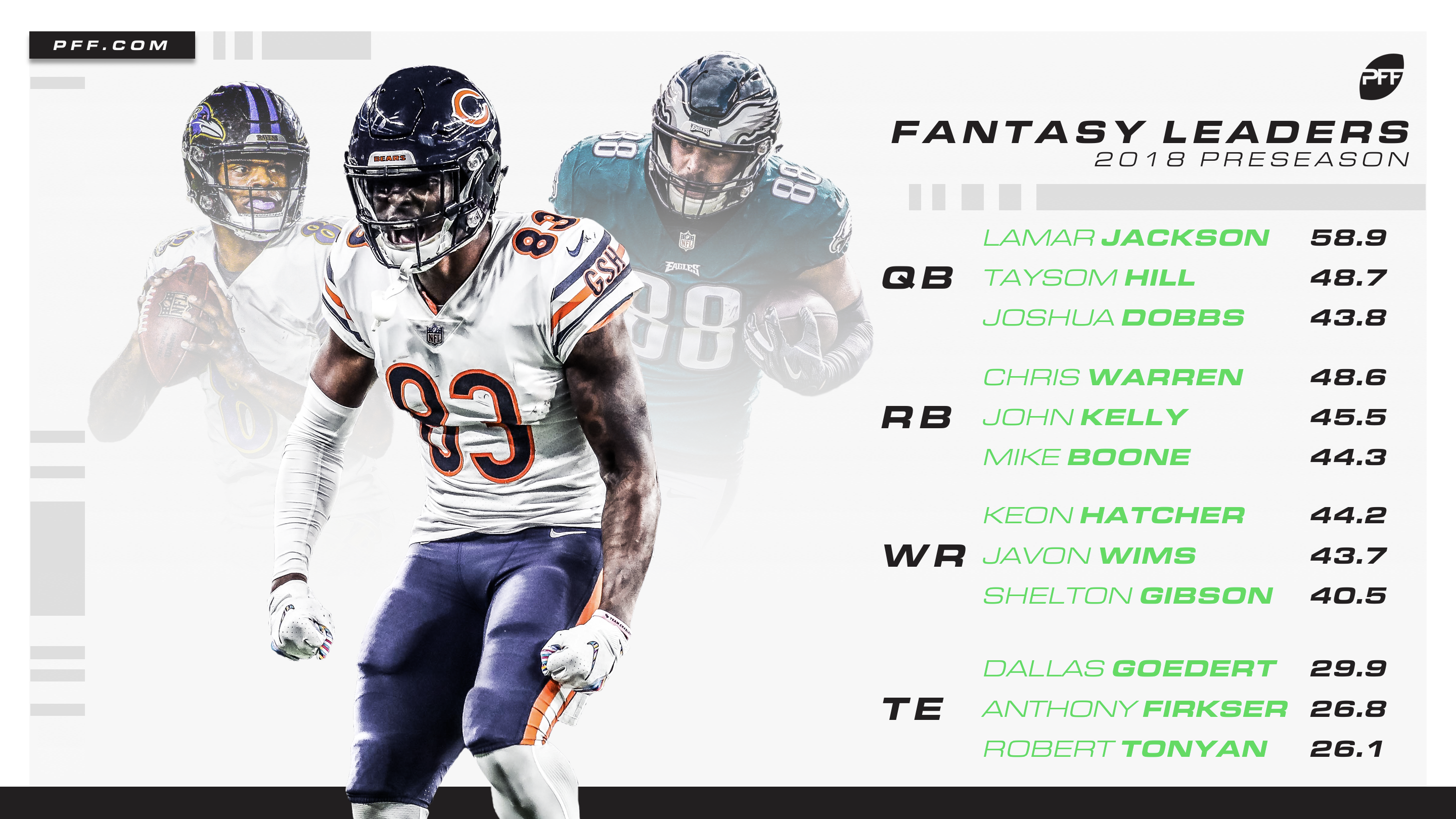 Here are some of the players who stand out to me.

In Week 1 DFS, we rarely see any of the starters play more than one or two series, if at all. Deshaun Watson is no exception. With AJ McCarron highly unlikely to play, Joe Webb becomes the top play on the slate. Jordan Ta'amu (signed Wednesday) will see some work but probably not as much as Webb. So, Webb has the most projected playing time of any quarterback and, as a nine-year veteran, is a lot better than many of the other quarterbacks who will be playing this week.

Will Grier is projected to play about 1.5 quarters, and that might be enough to make him one of the top quarterbacks on the slate. He’s been tearing up camp, and was my No. 2 quarterback in the pre-draft process.

Dwayne Haskins is listed as the team’s third-string quarterback. Colt McCoy is out and Case Keenum probably limited to a few series at most. Haskins (with a first-round pedigree) will be better than most quarterbacks seeing the amount of snaps he does Thursday. He also has added value when stacking with Terry McLaurin.

Chad Kelly is intriguing. Andrew Luck shouldn’t play at all, and I think the team knows what they have in Jacoby Brissett. That leaves Kelly and Phillip Walker. Kelly was one of my favorite under-the-radar quarterbacks in the 2017 draft and has exceeded expectations in camp.

C.J. Prosise and Travis Homer are out for Thursday’s game, and J.D. McKissic is a game-time decision. We probably won’t see much of Chris Carson or Rashaad Penny. That leaves us with just Bo Scarbrough and Xavier Turner. Turner was just signed Wednesday, making Scarbrough the easy call there.

Sony Michel and Rex Burkhead won't play and it's unlikely we see much of James White at all. This leaves us with just Damien Harris, Nick Brossette, and Brandon Bolden among the halfbacks on the team. Bolden never played more than eight snaps in any preseason game last year. This means Harris is one of the best plays on the slate, while Brossette too is also intriguing.

Jordan Scarlett is out, and Christian McCaffrey is unlikely to play. I think Carolina knows what they have in Cameron Artis-Payne, so I’d look at Reggie Bonnafon and Elijah Holyfield, with Bonnafon being the more exciting of the two (he’s seen a lot of work as a pass-catcher in practices).

Aaron Jones, Jamaal Williams, and Tra Carson are all unlikely to play for the Packers. That leaves us with just Keith Ford, Corey Grant, Darrin Hall, and Dexter Williams. Ford was claimed off waivers Tuesday, Hall was claimed just days before, and Grant was signed one day before that. Dexter Williams is listed as the No. 3 running back on the depth chart, so I’d bet he doesn’t play too much due to the injuries at the top. If forced to choose, I like Grant who averaged 5.6 yards per carry on 81 career NFL rushing attempts.

Per John McClain of the Houston Chronicle, following the release of D’Onta Foreman, we should see a lot of Josh Ferguson, Karan Higdon, and Damarea Crockett this preseason.

It's unlikely we see any snaps from LeSean McCoy (age 36) or Frank Gore (31), and T.J. Yeldon shouldn’t play much. Devin Singletary, a camp standout who I liked in college, becomes intriguing.

If Nick Chubb, Kareem Hunt, and Duke Johnson sit, this would leave us with only Dontrell Hilliard, D'Ernest Johnson, and A.J. Ouellette. All three are in play today.

Wide receiver is tough this week. It’s always tough in preseason DFS, and especially in Week 1. This is the position where you’re going to have to do a bit more of the research on your own.

Terry McClaurin has shown out in camp, with especially strong rapport from Haskins (his quarterback in college). If we get word he’s going to play a quarter or more (he’s currently listed as a starter on the depth chart, so maybe that’s unlikely) he might be the best play at the position.

Keep an eye on N’Keal Harry. He’s banged up but if he plays, he becomes one of the most intriguing names on the slate. He’s underwhelmed in camp, so I’d bet the Patriots give him as much playing time as he can handle this preseason.

Antonio Callaway has been running with the Browns’ second-team offense in camp and has struggled all offseason in practice. I’d bet he gets an extended look today.

Aldrick Robinson has exceeded 30 receiving yards in eight of his last 12 preseason games. If only for that reason, he’s a name to consider.

Tyler Kroft, Dawson Knox, and Jason Croom are all hurt and unlikely to play for the Bills. Rookie tight end Tommy Sweeney has been drawing rave reviews in camp. He’ll compete for playing time with Lee Smith and Keith Towbridge, both of whom are primarily blocking tight ends. Sweeney is probably my favorite player at the position this week.

Delanie Walker is unlikely to play this week, which pushes Jonnu Smith to the first team. Anthony Firkser will fight for majority playing time with Parker Hesse, Ryan Hewitt, and MyCole Pruitt. Firkser has been a camp standout, showing impressive rapport with Ryan Tannehill. If going a different option than Sweeney, I’d consider Firkser.