Who should be the No. 2 fantasy quarterback in this draft class?

At this time last year, there was a long, drawn-out and unnecessary debate in the fantasy football community as to which rookie quarterback was the top one to own in dynasty leagues. For PFF, the answer was easy: Baker Mayfield.

A better question is, “Who should be the first quarterback drafted after Murray in dynasty leagues?” So, let’s spend some time looking at who stands out directly behind him. Our data suggest it’s one of either West Virginia’s Will Grier, Missouri’s Drew Lock, or Ohio State’s Dwayne Haskins. 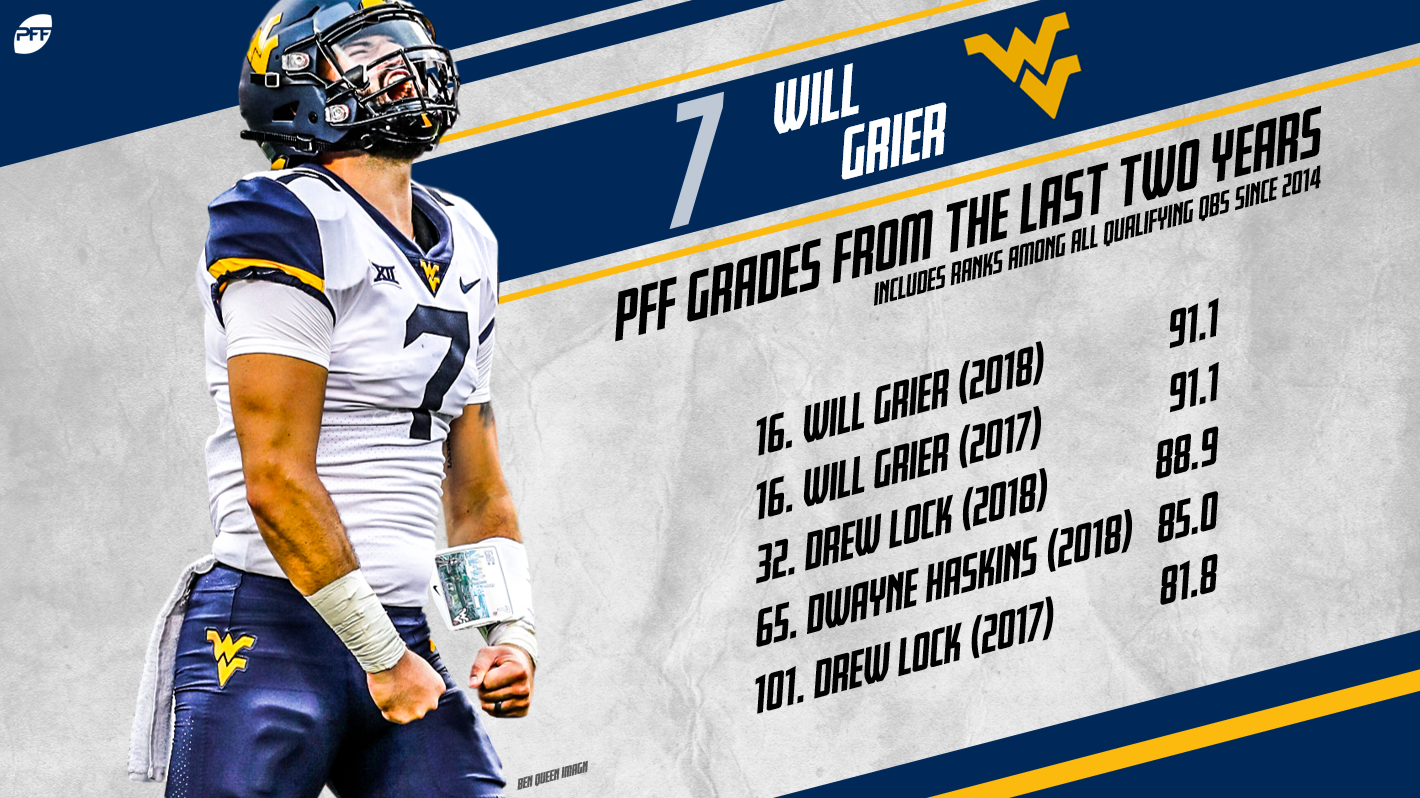 My favorite metric for measuring quarterback accuracy is depth-adjusted completion percentage, which I explained in-depth last week, and Josh Hermseyer proved is a highly effective metric for predicting success at the next level.

Among all Power-5 quarterbacks last year, Grier ranked third-best in depth-adjusted completion percentage, behind only Murray and Tua Tagovailoa. Haskins ranked 12th and Lock 21st. In 2017, Grier ranked second-best, behind only Mayfield. Haskins failed to qualify in 2017, while Lock ranked fifth-best.

Although Haskins was elite in touchdown rate (fifth-best), he was actually well below average in big time throw percentage (128th). Similarly, he ranked fifth in interception percentage but 21st in turnover worthy throw percentage. This implies Haskins got a little lucky in the interception department (perhaps a number of these throws were dropped by defenders), while continually getting bailed out by playmakers scoring touchdowns due to skills after the catch (thank you Parris Campbell) rather than from quarterback play. The reverse was true for both Grier and Lock.

Though Lock struggled by this metric early in his career, he ranked behind Grier and ahead of Haskins in each of the past two seasons.

Haskins has started in four games against defenses ranking top-25 in passer rating allowed throughout his career. Although all of these teams held their collective opponents to a passer rating below 80.0, Haskins averaged a 118.1 passer rating against them, with 350.0 passing yards per game and a 13:2 touchdown:interception ratio.

Based on everything we’ve looked at here, I feel confident ranking Grier as the No. 2 rookie quarterback in 2019 dynasty drafts. After him, it’s a much closer call between Lock and Haskins for who is more deserving of QB3 status. And then, after them, there’s a steep dropoff — both in my rankings and in the metrics we’ve already discussed.

As always, when analyzing rookies, landing spot and draft capital tend to be the true deciding factors. This could easily move Lock or Haskins above Grier after the draft, or maybe even Daniel Jones above anyone but Murray.

On Tuesday, Adam Schefter reported that both Jones and Lock will be attending the NFL Draft while Grier and Haskins will be watching at home, perhaps implying the consensus is neither quarterback is likely of being a Day 1 pick. This alone broke the tie for me between Lock and Haskins. Lock was our highest-graded draft-eligible quarterback on deep passes last year, which is certainly something NFL teams tend to covet (read: overrate), so it wouldn’t surprise me if he’s the second quarterback drafted later this month.

By every metric we’ve looked at so far, Jones looked significantly worse compared to Grier, Lock, or Haskins, but, as I tried to outline, he also had a number of extenuating factors working against him negatively impacting his numbers.