As we flip ahead to Week 11 of the NFL season, fantasy football playoffs are suddenly right around the corner. However, we’re not quite out of the woods yet when it comes to lineup decisions. Another six teams are set for a bye this weekend, although Tom Brady and perhaps Baker Mayfield are the only viable fantasy QBs among those teams.

Of Week 10’s top 12 fantasy quarterbacks, only five were started in at least half of ESPN leagues. And of the six streaming options featured in this space, half of them finished as fantasy QB1s – the fourth straight week I get to toss out that #HumbleBrag. With bye weeks in full swing over the past few weeks, 19 QBs are owned in at least half of ESPN leagues, so the waiver wire pickings aren’t overly plentiful.

That’s where peeking at the upcoming schedule comes more into focus this time of year. For example, a high-owned player like Matthew Stafford has more tough matchups than is probably worth holding on to at this point, but someone like Ben Roethlisberger could be worthwhile to pursue as an insurance policy streaming option down the stretch. During fantasy playoffs Weeks 14-16, he’ll face three bottom-10 defenses in fantasy points allowed to opposing QBs.

(*Monday’s grades not yet finalized)

Notes: It’s often not the case in fantasy football, but Mayfield and Bortles both produced scoring outputs that were right on par with our analyst grades. Mayfield impressively had as many touchdowns (3) as incompletions and did not take any sacks. No wonder he felt dangerous. … I detailed Bortles’ overwhelming success against Indianapolis in recent seasons, and that continued with yet another strong showing on Sunday. … Fitzpatrick had a rough day despite a serviceable fantasy showing, although I did caution last week that it wouldn’t be smooth sailing against Washington’s improved secondary. … Smith was more of a deep league option, but he still underwhelmed despite being pressured at only the 19th-most-frequent rate on Sunday behind Washington’s injury-ravaged O-line. … As for Dalton, it’s tough to rack up fantasy points when attempting only 20 passes, two of which were intercepted.

Below are the most attractive options for QB streaming for Week 11 who are either widely available, on your bench, or priced cheap in daily formats.

Player A just posted his second straight two-interception game, didn’t throw any touchdowns, and at times displayed either wild inaccuracy or spotty decision making. Player B threw for 400-plus yards for the fourth time in six starts and completed 13-of-16 passes at the intermediate level (10-19 yards). As you probably figured out, both players are Fitzpatrick, who still happens to be the same guy who owns PFF’s No. 7 passing grade this season and also posted top-six fantasy finishes in all but one of his previous six starts. In fact, only Patrick Mahomes and Drew Brees have averaged more fantasy points per dropback than Fitzpatrick (0.64) this season.

Maybe a mulligan is owed, after all. There are certainly plenty of reasons to like this week’s matchup against a Giants defense playing on a short week. While the Giants pass defense has mostly been able to limit damage, they entered Monday night’s game owners of PFF’s third-worst pass-rush grade and sixth-worst coverage grade. Better yet, Tampa Bay has an implied total of 26 points from Las Vegas oddsmakers. 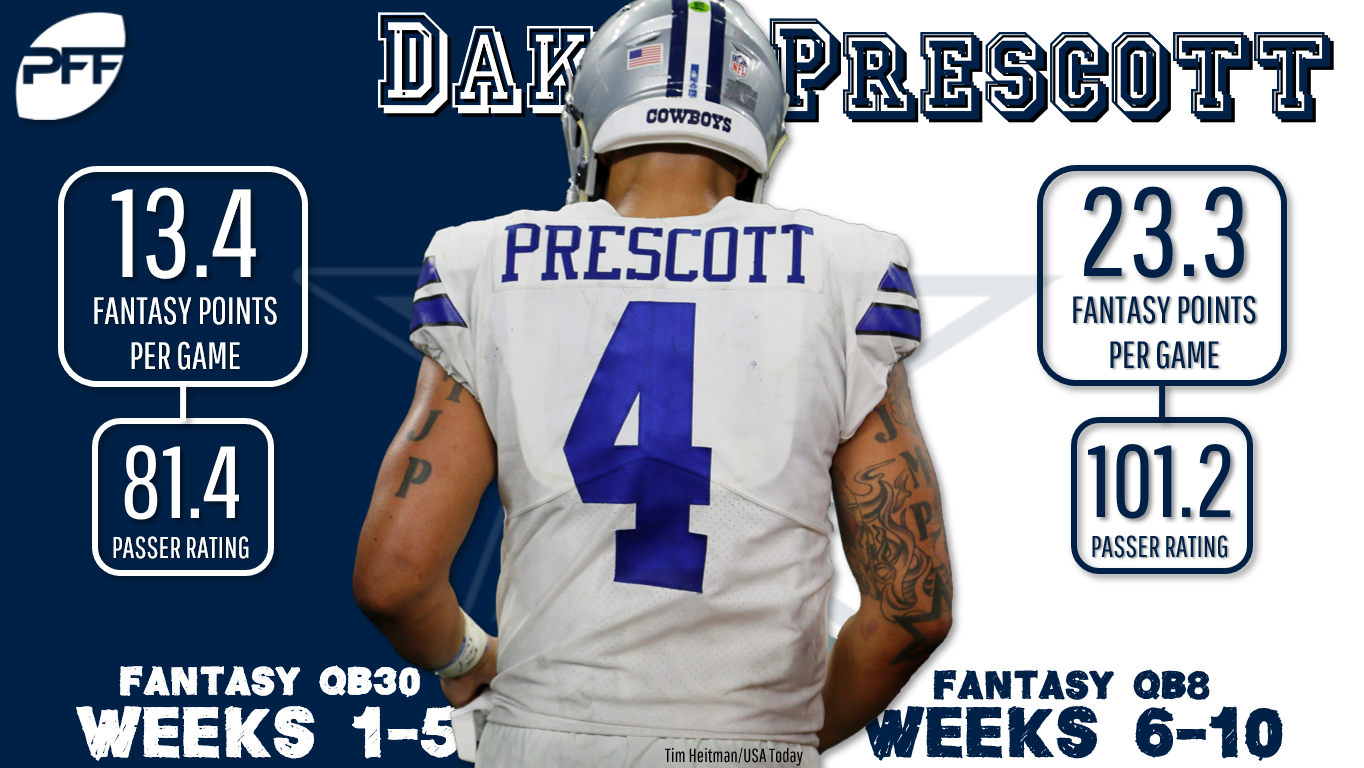 His bottom-line fantasy stats won’t wow anyone, but over his last four games, Prescott owns a 101.2 passer rating and is averaging 32 pass attempts, up about four attempts from his average over the first five games. Somewhat quietly, Prescott has also recorded a rushing touchdown in three of the last four games to help fantasy owners. He was pressured on 36% of his dropbacks against the Eagles Monday night and managed to rack up 270 yards through the air in a game that saw Ezekiel Elliott gash Philly’s defense for 151 rushing yards on 19 carries.

Most notably, Prescott has himself a new favorite target in recently acquired Amari Cooper, who has turned 17 targets into 11 catches for 133 yards and a score in two games with Dallas. Playing on the road this week against one of the league’s top scoring teams in Atlanta (27.1 PPG), Prescott and the Cowboys will need to keep their foot on the gas pedal. In addition to having allowed the fourth-most fantasy points to opposing QBs, the Falcons are graded 29th in pass rush and 25th in coverage.

Sunday against Indianapolis was more Jekyll than Hyde for Bortles, who turned in his best outing since Week 4 with 320 passing yards, two touchdowns, and zero turnover-worthy plays. With Leonard Fournette returning to the lineup, Bortles still aired it out 38 times in a tightly contested game as the Jaguars’ banged up offensive line struggled to open up running lanes. In fact, Fournette got in on the passing action, catching 5-of-5 targets for 56 yards and a score. If there’s a concern, it’s that Bortles’ average depth of target was just 4.0 yards downfield, or half his aDOT (7.9) over the first eight games.

Up next is a Steelers defense that is yielding the sixth-most fantasy points to quarterbacks, although they have been much improved over the last three games since coming out of their bye. One silver lining for a potentially more back-and-forth matchup than initially expected, particularly if A.J. Bouye is again sidelined due to his calf injury, is that Jacksonville owns PFF’s ninth-worst coverage grade on the season. Ben Roethlisberger will look to take his shots downfield after moving the ball at will against Carolina this past Thursday.

Don’t look now, but Mariota is a top-seven fantasy QB over the past couple of weeks (he was featured here as a streaming option prior to Week 9). Perhaps having numbness in one’s throwing hand for several weeks is a bigger obstacle than most realize. In any case, he was accurate on 5-of-6 deep throws (including one drop) for 93 yards and a score in that big win over New England. On the season, Mariota is the fourth-most accurate QB (out of 49 qualifiers) on deep passes with a 56.0-percent completion rate adjusting for drops.

On tap this week is a Colts defense that owns PFF’s sixth-worst pass-rush grade. Mariota, of course, is at his best when using his legs to extend plays, and he sports a 140.5 passer rating when kept clean over the past two weeks, compared to a 71.1 rating when pressured. Over its last two games, Indianapolis has allowed a combined 564 passing yards with five TDs and no interceptions against Blake Bortles and Derek Carr. Corey Davis is looking like a true No. 1 after roasting Stephon Gilmore time and again on Sunday (6-98-1), and Jonnu Smith is looking for his third straight game with a touchdown.

It was always going to be a tall task for Rosen to go into Arrowhead Stadium for the first time and put on a show, but this week is a different story. We first endorsed Rosen in this space back in Week 8, which turned out to be his best performance to date thanks in part to a favorable matchup. He’ll get another inviting matchup this week against an Oakland defense that ranks in the bottom-three in both PFF pass-rush grade (31st) and coverage (30th). The Raiders have allowed multiple touchdown passes in seven straight outings, including four games with three passing TDs. The only opposing QB in that stretch who failed to eclipse 20 fantasy points was Baker Mayfield back in his first career start.

It’s been a mixed bag for Arizona’s offense in two games with Byron Leftwich at the helm, but Rosen has remained aggressive. The rookie boasts a 107.7 passer rating on deep throws, which account for a healthy 13.1% of his dropbacks. Out of 49 qualifiers this season, Rosen ranks third-best in adjusted completion percentage (58.1) on downfield targets. The other side of that coin is that he took advantage of a criminally underutilized option this past week against Kansas City, completing 7-of-8 targets to David Johnson for 85 yards and a touchdown.

Along with multiple reports over the weekend about Joe Flacco’s Week 11 status being in question, Jay Glazer offered up that it’s a matter of when, not if, Ravens’ first-rounder Jackson is starting games this season. Coach John Harbaugh was coy on the team’s Week 11 starter during Monday’s press conference, but with Flacco sporting crutches during Baltimore’s bye, it would be surprising at this point if Jackson wasn’t under center in a key divisional matchup. Of course, with Harbaugh’s seat growing hotter, nothing can be taken for granted.

The point is this: If you’ve got a roster spot to spare, Jackson’s potential QB1 fantasy ceiling presents an awfully intriguing insurance stash for the stretch run. Interestingly, his price tag on daily fantasy sites reflects that of a fantasy QB2 expected to get some run. The matchup is certainly a favorable one against a Bengals defense giving up the third-most fantasy points to opposing QBs. In fact, Cincinnati has allowed three or more touchdown passes in each of its last three games. Jackson showed off his dual-threat ability in the preseason, completing 34-of-68 passes for 408 yards, three TDs and an interception to go with 136 rushing yards and three TDs on 23 carries (5.9).