The bad news for fantasy owners is that six teams have a bye in Week 9. The good news is that there is hardly a shortage of fantasy streaming options at quarterback, even with 19 QBs owned in at least half of ESPN leagues.

Case in point: 13 QBs hit the 20-point mark on Sunday, seven of whom were left on benches in more leagues than not. Week 7 also marked the third straight week that at least half of our streaming suggestions delivered a QB1 fantasy day.

In terms of roster management, we’re about to kick off a stretch of 16 byes over the next three weeks. With so much demand for viable quarterbacks, those with a roster spot to spare will want to plan ahead. Tuesday also happens to be the NFL’s trade deadline, and trade rumors abound for several big-name receivers.

Notes: Winston’s atrocious outing resulted in a benching and brings Ryan Fitzpatrick back into the picture. … On the other end of the spectrum, Dalton was one of the top recommended streaming plays, and he delivered one of our Sunday Standout performances as the Bengals offense landed right on the Las Vegas implied total of 30 points. … Over his last four games, Trubisky is fantasy’s overall QB1, with a 16-game pace that extrapolates to almost 4,900 yards with 52 touchdowns and 12 interceptions. While he’s still available in way too many leagues and was even benched in about half of Week 8 lineups, Trubisky is a weekly must-start and no longer eligible for streaming consideration. … Owned in only 15% of leagues in the wake of #CryGate, Carr delivered the second-best fantasy performance on Sunday. … Rosen turned in his best outing to date, as the Cardinals were more effective moving the ball under new offensive coordinator Byron Leftwich.

Below are the most attractive options for QB streaming for Week 9 who are either widely available, on your bench, or priced cheap in daily formats

Mayfield may not miss Hue Jackson, but whichever coach is anchoring the ship, the Browns’ rookie signal-caller could use a little more help from his friends. No quarterback has been victimized by more drops than Mayfield (18) since making his debut in Week 3. The Browns also had a tough time handling Pittsburgh’s pressure on Sunday, and that had been a theme of late with Mayfield taking five sacks in each of his previous three starts to go with a 60.1 QB rating under pressure this season.

Fortunately, this week’s opponent, the Chiefs, rank 25th in both PFF pass-coverage grade and fantasy points allowed to opposing quarterbacks. Cleveland will need to air it out in order to keep pace with Kansas City in a game that Las Vegas oddsmakers opened with a 52-point total.

Tennessee’s defense hasn’t exactly been the friendliest unit to attack through the air, and a projected low-scoring affair between two of the league’s bottom-dwellers in terms of plays per game is typically not a matchup to attack for fantasy purposes. However, there are several factors working in Prescott’s favor. 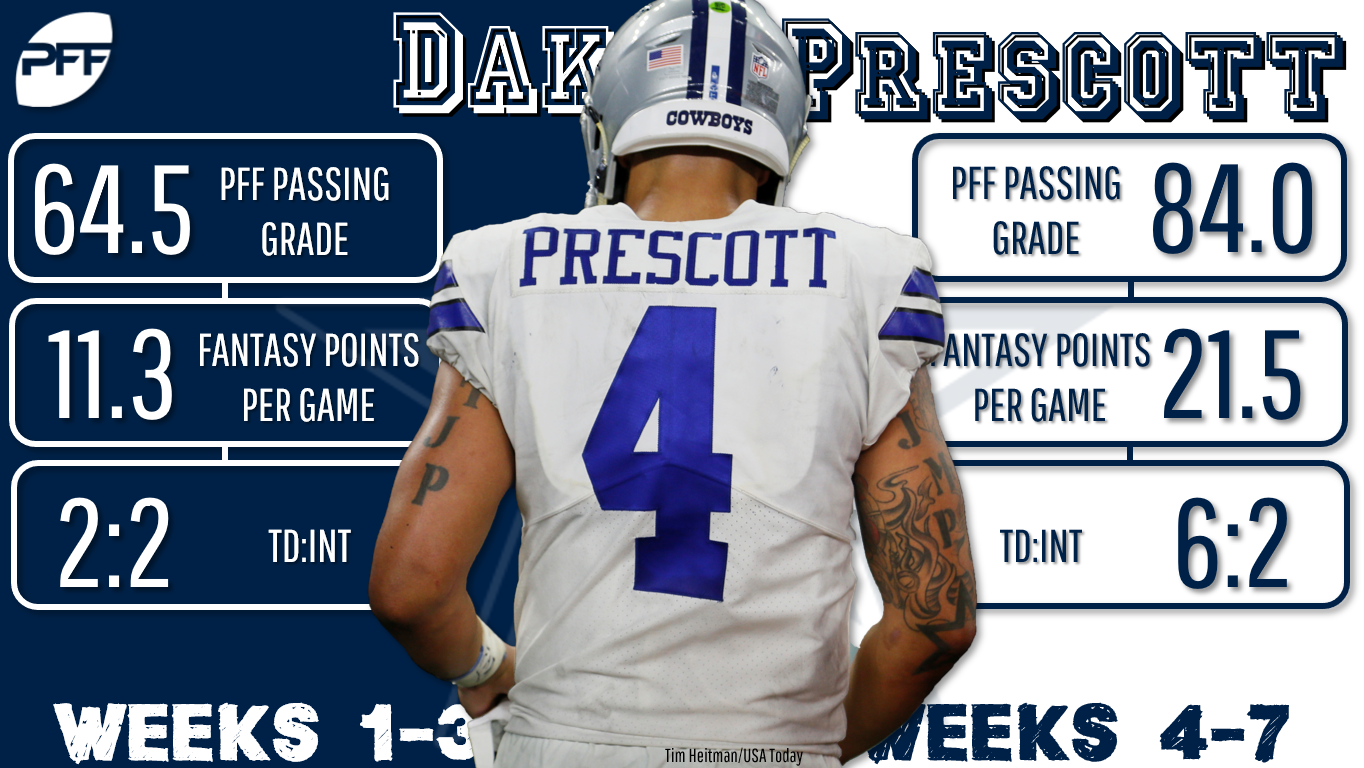 Somewhat quietly, Prescott owns PFF’s seventh-best passing grade over his last four games. Over that span, he also ranks 11th in percentage of deep targets (20-plus yards downfield), with a 108.1 passer rating on those throws. While the film still reveals Prescott’s tendency to abandon his downfield reads a split-second too early, he did manage a 112.5 passer rating when pressured in Week 7 despite feeling heat on more than half of his dropbacks. The Cowboys used the bye week to replace their O-line coach as well as trade for Amari Cooper, and Prescott is coming off back-to-back solid outings with a pair of rushing scores to boot.

Of Carr’s seven starts this season, he has thrown for three-plus touchdowns and/or 300-plus yards four times. Yes, his average depth of target (6.4 yards) ranks 38th out of 38 qualified QBs this season, but then again, the majority of the top-10 fantasy QBs this season also rank outside the top-25 in that category. Throwing deep is one thing, but throwing with purpose is another, and Carr didn’t record a single turnover-worthy play against Indianapolis on Sunday.

He did also complete 2-of-4 downfield throws, including one for a touchdown. And although Carr was pressured on a league-low 10.7% of his dropbacks in Week 8, he posted a 118.1 passer rating on those plays. On tap this week is a 49ers defense that is graded dead-last in pass coverage and 26th in pass rush, having allowed the seventh-most fantasy points to quarterbacks this season.

By and large, fantasy gamers have moved on from Mariota, which is certainly understandable given his spotty play. Whether it’s been nerve damage affecting his throwing hand, or adjusting to a new coaching staff and scheme, Mariota has been a colossal disappointment any way you slice it. Tennessee’s ground game came to life against the Chargers, but Mariota attempted only one pass beyond 20 yards downfield.

Still, this is a guy one year removed from being the top fantasy scorer over an eight-game stretch (i.e. half a season), now playing under his third different offensive coordinator and third head coach in four years. Given Matt LaFleur’s body of work with the likes of Jared Goff, Matt Ryan, and Robert Griffin III, those looking for a bye-week replacement should not gloss over a rested Mariota.

This will undoubtedly be the most popular streaming option this week, and for good reason. In Fitzpatrick, we’re talking about a guy who was the top fantasy QB during the season’s first three weeks. Despite a bit of musical chairs at quarterback, Tampa Bay’s passing game is off to a historic start, thanks in part to one of the league’s most potent WR corps. FitzMagic is also a big part of that after leading another fourth-quarter comeback with scores on three of his four drives.

Not only has he vastly outperformed Winston in TD-INT ratio, he’s also pushed it downfield on 14% of his targets, with a 139.6 passer rating on those throws. Against Cincinnati, Fitzpatrick often maneuvered in the pocket to buy time and deliver accurate passes to his playmakers. Now at the helm of an offense that ranks top-four in plays and pass attempts per game, he is very much back in the QB1 mix moving forward. This week’s matchup against Carolina opened with one of the highest over/unders (54)

Darnold’s numbers have taken a dip over the past couple of weeks, although there have been some encouraging signs for the Jets rookie. Since Week 5, Darnold has taken shots downfield at the fifth-most-frequent rate (14.6%). However, he also owns only a 25.6 passer rating under pressure during that span, compared to a 93.9 rating when kept clean. The good news for this week is that Miami is graded 28th in coverage and 25th in pressuring the quarterback.

Dealing with constant pressure from Chicago’s front-seven on Sunday, Darnold hung in the pocket and delivered a handful of big plays, particularly to Deontay Burnett. Still, it was a largely conservative game plan that likely won’t be repeated against a more exploitable defense. The Jets also need to clean up the pre-snap penalties after five different players were whistled for false start penalties, leading to less manageable down and distances.