It’s Week 8 of the fantasy football season, and demand is on the rise for viable streaming quarterback options. Off the fantasy radar this week due to byes are Matt Ryan, Phillip Rivers, Dak Prescott, and Marcus Mariota, with six more byes on tap for Week 9. Subsequently, 19 quarterbacks are now owned in more than half of ESPN leagues, and that number figures to rise again next week.

While the supply may be dwindling, we also have more data points to better identify QBs to target and ones to avoid. Half of my six streaming picks delivered QB1 fantasy outputs for the second straight week, and once again, half of Sunday’s top-12 fantasy QBs were widely available streamers. With so much volatility from week to week, it’s tempting to want to just set it and forget it when it comes to the quarterback position in weekly lineups.

The Sultan of Stream himself, Blake Bortles, finally had the plug pulled on him after another up-and-down performance. On the other end of the spectrum, even all-time passing leader Drew Brees finds himself benched near the goal line for a guy with one career completion. Both ranked among the top-12 fantasy quarterbacks on the season entering Week 7. And while many kept Brees in their lineups despite a tough road tilt at Baltimore, those who pivoted to a high-ceiling, low-floor option like Joe Flacco were ultimately rewarded.

Notes: I’ve endorsed Mayfield a few times in this space, and he continues to be a solid streaming option despite not listed below for this week’s streaming picks. No quarterback has been victimized by drops as often as Mayfield (16 in five games), but those missed opportunities has also kept his ownership at bay. … Speaking of drops, Flacco leads the league in that department (19), but he came through in a plus matchup last week and also got back on the same page as John Brown. … Darnold had a brutal day at the office but savaged a QB2 fantasy day with a rushing score. … Trubisky was better for fantasy owners than he was in real life.

Below are the most attractive options for QB streaming for Week 8 who are either widely available, on your bench, or priced cheap in daily formats

Benched in roughly half of ESPN leagues in each of the last two weeks, Winston is worth elevating into starting lineups not just for Week 8’s matchup with Cincinnati, but for the foreseeable future. Winston was the top fantasy QB over the final five games of 2017, and over the past two games since the Bucs came out of their bye, he has racked up 760 passing yards with five total TDs, trailing only Patrick Mahomes and Mitchell Trubisky in fantasy scoring during that span. This week, Tampa Bay has an implied Las Vegas game total of 24 points against a Bengals defense that has surrendered the fifth-most fantasy points to opposing quarterbacks.

Winston had a rough go of it against Cleveland, facing pressure on 32% of his dropbacks and taking four sacks as the Bucs had no real ground game on which to rely. One of his interceptions was under duress, and Winston missed several open receivers throughout the day. Still, he stayed aggressive and completed 9-of-16 attempts at the intermediate level (10-19 yards). He also salvaged his fantasy day by rushing for a career-high 55 yards and a score. It was far from his best day, and he didn’t even throw a touchdown, yet Winston still posted a top-three fantasy performance on Sunday.

There’s no sense burying the lede. Hardly anything went right for Dalton and the Bengals offense in what was supposed to be an exploitable matchup against Kansas City. For his part, Dalton tossed a pick-six and was off target on quite a few open looks. Of course, the ground game didn’t offer much support with the Bengals falling behind early. Still, Dalton mostly just locked in on A.J. Green (14 targets), as no other pass-catcher topped four targets or 30 yards.

That said, this week would be a good time to have a short memory. Cincinnati opened the week with an implied total of 30 points, a number that is typically unheard of for a streaming candidate. Owners of PFF’s worst-graded pass rush on the season, the Buccaneers have allowed the most fantasy points to opposing quarterbacks as they rank seventh-worst in coverage grade. This will be one of the top matchups to attack for fantasy purposes in Week 8.

It feels like cheating to list Trubisky here again, but he’s still unowned in roughly half of ESPN leagues and was parked on far too many benches this past Sunday despite coming off consecutive dominant performances. Since Week 4, nobody is scoring more fantasy points per game (35) or per dropback (0.86) than Trubisky. In fact, he’s averaging 23.2% more points per dropback than the next-closest quarterback in that span.

This week, Trubisky and the Bears carry an implied total of 27 points against a Jets defense that has allowed an average of 327 yards and 2.5 TDs through the air over their last four outings. Only Patrick Mahomes boasts more deep completions (22) than Trubisky’s 16, although Mahomes has played one more game. A league-best 19% of Trubisky’s attempts have been targeted beyond 20 yards downfield, and the Jets have allowed some big plays of late.

Anyone who watched the Raiders/Seahawks debacle in London a couple weeks ago is forgiven for wanting to stay far away from Carr. Particularly with Amari Cooper now shipped out of town and Marshawn Lynch hurt, the Raiders sure do look like a sinking ship. However, with a healthy implied total (24 points) and two weeks to prepare, Carr is someone I can get behind this week in 2QB leagues. For what it’s worth, he also got a big vote of confidence from coach Jon Gruden this week.

Carr is completing 73% of his attempts with only one interception over the last two games, although he hasn’t pushed the ball downfield all that much. Still, it’s worth remembering that he did top 300 yards in three of the first four games to open the season, including a 437-yard, four-touchdown outing against Cleveland in Week 4. And while he’s developed a reputation as a checkdown artist, Carr is actually the league’s most accurate QB on deep throws (63.2%). Unfortunately, those throws account for a league-low 8.2% of his total targets.

The Broncos are double-digit underdogs in a game with one of the week’s highest projected totals (55.5 points). Those looking for a bye week replacement could do worse than Keenum in catchup mode against a Kansas City defense that has yielded the sixth-most fantasy points to quarterbacks and owns PFF’s second-worst coverage grade. 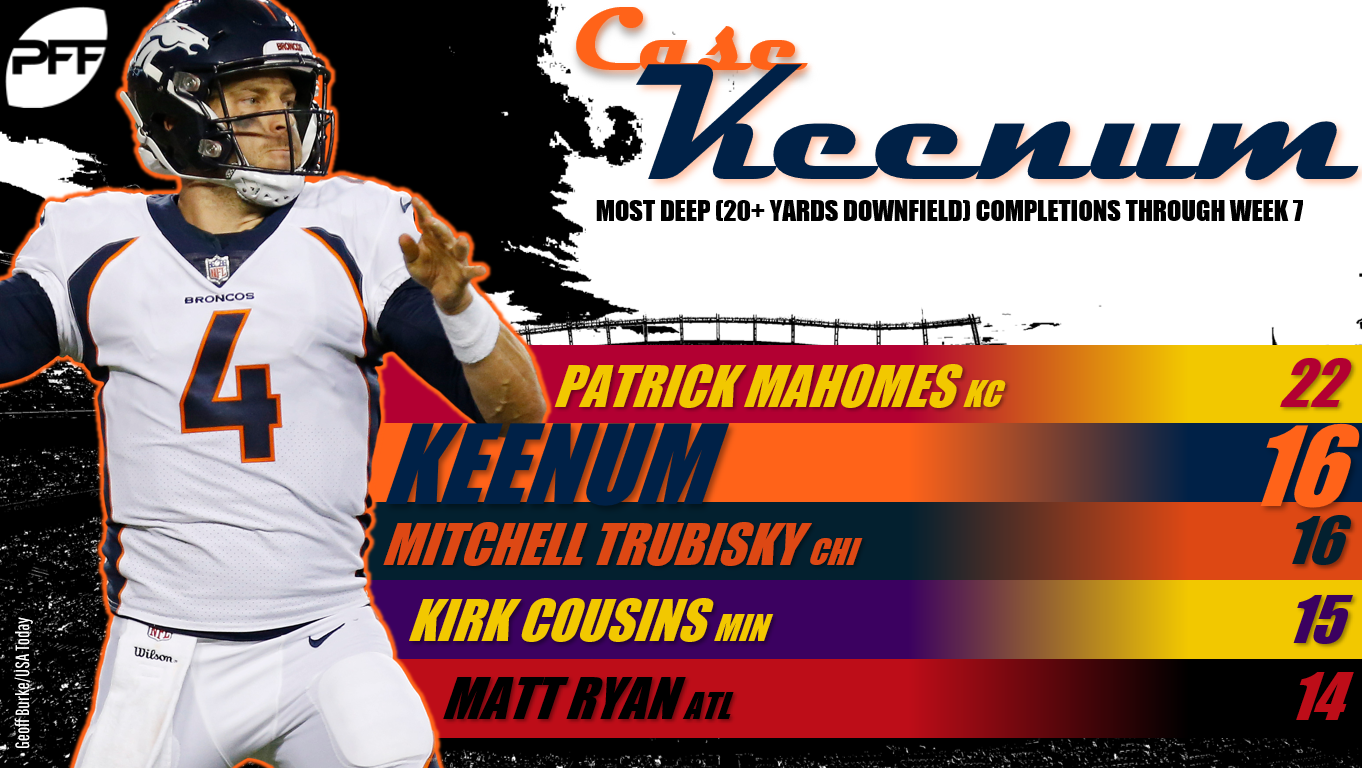 He wasn’t asked to do much besides protect a big lead against Arizona in Week 7, but somewhat quietly, Keenum ranks fifth in deep target percentage (15.7%). His 64.6 passer rating on those throws leaves much to be desired, although Keenum did connect with Emmanuel Sanders for a 64-yard scoring strike. His 95.2 passer rating against pressure over the last three games also ranks eighth-best in that span. Armed with dominant run-blocking, an emerging Courtland Sutton, and 10 days to prepare, Keenum is a high-floor play in 2QB formats.

If a breakout is coming for the rookie Rosen, it’d be this week against a 49ers defense that is graded dead-last in pass coverage (37.6) by a substantial margin. In fact, of the 416 total team grades our analysts have assigned across 13 different categories, San Francisco’s coverage grade ranks 414th, ahead of only the Bills’ passing game and the Browns’ tackling. The 49ers are also 26th of 32 in pass rush and 25th in fantasy points given up to QBs.

One of the only positives to come out of Thursday’s ugly loss to Denver was that Rosen got a few extra days off for his toe to heal up (he was held out of Monday’s practice). Another is that Mike McCoy was removed as offensive coordinator and replaced by Byron Leftwich, who has nowhere to go but up. Rosen has struggled with the things that many rookies have struggled with: namely, handling pressure (31.9 passer rating) and locking in on primary reads. But there are some encouraging signs in Rosen’s body of work. He’s throwing deep at the eighth-most frequent rate in the league, and his 55.6% adjusted completion rate on those throws is also the fourth-most-accurate mark in the league. Despite a few drops, he still owns a rather solid 100.5 passer rating on downfield throws.