Save for one Nick Mullens, Week 9 was one of the chalkiest weeks we’ve seen this season, not just in terms of quarterback streaming but for the NFL as a whole. Four of the week’s top 13 fantasy QBs came from the streaming ranks, and three of those four were featured in this space.

Looking ahead to Week 10, four more teams are on bye as fantasy owners of Deshaun Watson and Kirk Cousins are forced to make other arrangements. Another six teams are idle next week. If you own Tom Brady, for example, now would be a good time to peek at the upcoming schedule for the available waiver options.

(*Monday’s grades not yet finalized)

Notes: Mayfield spent some time in the medical tent but was quickly cleared to return. … Mariota had three total touchdowns on Monday night but should have had a fourth. In what has been an all-too-familiar occurrence, he was off target on a wide-open Corey Davis. … Prescott delivered an early touchdown to new teammate Amari Cooper, who led the Cowboys in catches (5) and receiving yards (58). … Fitzpatrick was an easy free square despite being priced 19th on FanDuel and owned in only 6.0% of ESPN leagues this time last week. … Carr (and anyone on the Raiders) is officially off the fantasy radar and just a regrettable call by me. … Darnold remains an intriguing prospect, albeit one who is going to be tough to trust in fantasy lineups most weeks.

Below are the most attractive options for QB streaming for Week 10 who are either widely available, on your bench, or priced cheap in daily formats.

Dalton and company will have had an extra week to rest up and prepare for this weekend’s intra-conference tilt. When we last saw Dalton in Week 8, he was one of our Sunday Standouts against Tampa Bay. Dalton was just 9-of-17 when taking longer than 2.5 seconds to throw the ball, and he was 12-of-16 including both of his touchdown passes when releasing it quicker. Making quick decisions has been a key all season long for Dalton, who owns the league’s fastest release time (2.38 seconds), min. 100 dropbacks. 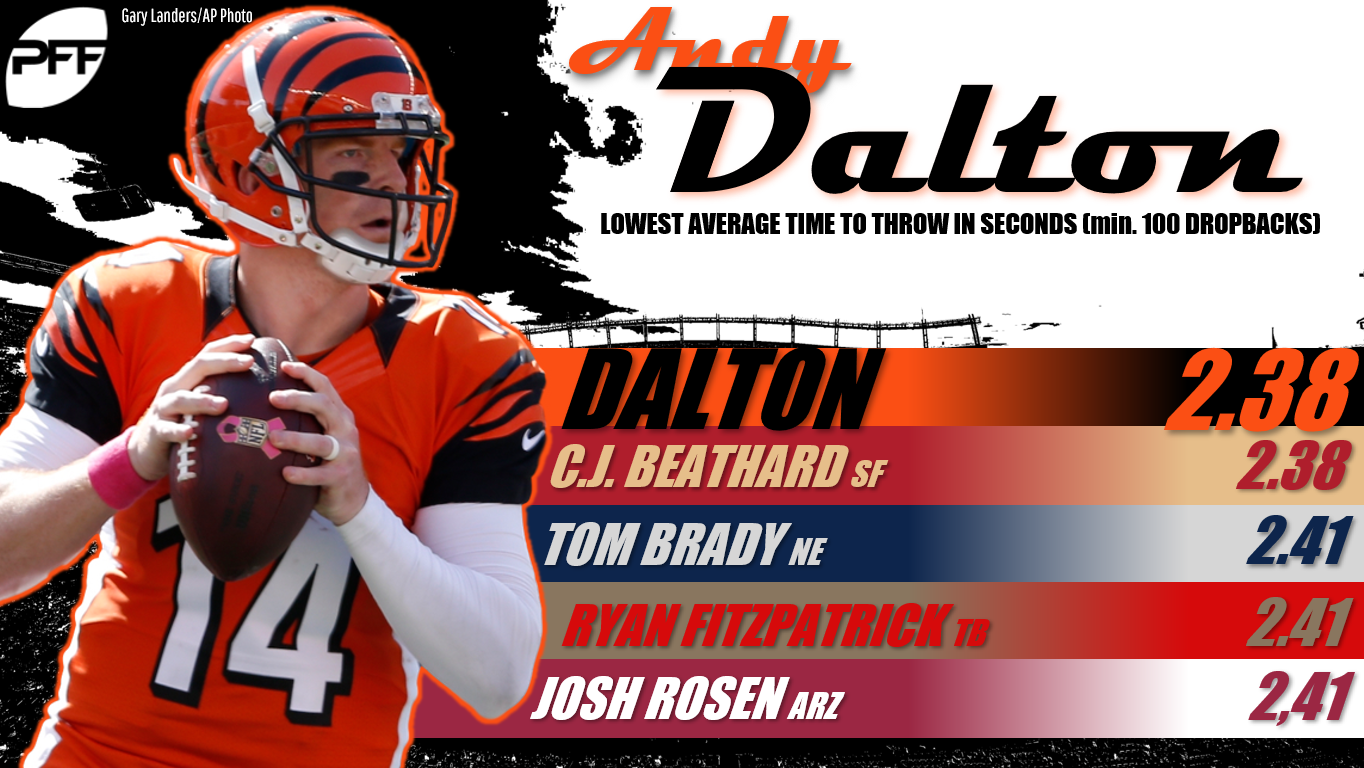 On tap Sunday is a Saints defense that owns PFF’s fourth-worst coverage grade and has allowed the second-most fantasy points to opposing passers. Each of the last three QBs New Orleans has faced since coming out of its bye has gone over 20 fantasy points. Not having A.J. Green no doubt caps some of Dalton’s upside, but not enough to fade him outright. The matchup opened with the highest over/under on the Week 10 slate, with the Bengals four-point underdogs.

It may not be smooth sailing for Fitzpatrick and the Buccaneers this week against a Washington defense that’s been one of our better-graded coverage units (No. 7 PFF grade). Still, Tampa Bay continues to lead the league in passing yardage. In fact, Fitzpatrick has finished top-six in fantasy scoring in all but one of his five starts this season, and he owns PFF’s sixth-best QB grade.

Overall, he had a pretty good showing in Week 9 despite a couple of turnovers against the Panthers. The Bucs’ O-line had its struggles, allowing pressure on nearly half of Fitzpatrick’s dropbacks (46.8%). Entering last week, Fitzpatrick owned the league’s second-best passer rating under pressure (103.0). Perhaps most notably, Mike Evans was shadowed by Panthers’ CB James Bradberry and managed only one catch for 16 yards on 10 targets. However, the Redskins corners have stayed at home.

Fitzpatrick isn’t the only viable streaming option in a Bucs-Redskins game with a 52-point total. Although we’re a long way away from the 2017 version of Smith that was the league’s deep passing king and No. 4 fantasy QB. In his first year with Washington, Smith sports his lowest PFF grade since 2012 and has posted wholly pedestrian passing numbers. With the Redskins’ entire O-line banged up, admittedly he’s a curious streaming pick outside of 2-QB and deep leagues.

The reason he’s mentioned here is simple: Tampa Bay has given up a league-high 22 passing scores with only one interception. The Bucs rank dead-last in both fantasy points allowed to quarterbacks and PFF pass rush grade, and they are 28th in coverage grade. Of the eight QBs that Tampa Bay has faced this season, Eagles’ backup Nick Foles was the only one who failed to crack 20 fantasy points. Put simply, the timing could not be better for Washington to face a team that struggles putting pressure on, and slowing down, opposing quarterbacks.

Eyeing up a fourth straight multi-touchdown game, Mayfield gets a pretty tasty matchup against a Falcons defense that ranks third-worst in both fantasy points allowed to quarterbacks and PFF pass-rush grade. While Atlanta became the latest defense to hold Eli Manning and Alex Smith in check in recent weeks, it’s still a unit that yielded 16 passing scores over its previous five outings, hence Cleveland’s 24-point implied total.

The Browns are in the midst of a transition at head coach and offensive coordinator, while mounting injuries and miscues on the defensive side of the ball have forced Cleveland into weekly negative gamescripts. According to interim coach Gregg Williams, former No. 2 overall pick Greg Robinson may have earned himself the starting left tackle gig moving forward, which presents a massive upgrade over UDFA turnstile Desmond Harrison as far as Mayfield’s blindside is concerned. Through it all, Mayfield continues to stay in the streaming picture despite the typical rookie ups and downs.

Bortles tends to fare well head-to-head against Indianapolis. He has gone six straight meetings without being intercepted, and he’s put up multiple TDs and/or 300-plus yards in each of those meetings. This time around, he’ll face a Colts defense that most recently was carved up for 28 fantasy points by Derek Carr. Bortles owns only a 67.2 passer rating when pressured this season, but Indianapolis has struggled to generate a consistent pass rush.

Leonard Fournette’s expected return from a lingering hamstring injury could tilt the Jaguars back to a run-first approach, which makes Bortles a risky streaming option this week. Then again, when isn’t he a risky option? Through the season’s first five weeks, Bortles was 10th in fantasy scoring among QBs. In three games since then, he ranks 29th in fantasy points per dropback (0.36). Of course, his receivers haven’t been super helpful with a league-high 29 drops. The last time we saw Bortles, he was his typical up-and-down self against Philadelphia. He made a few big plays with his legs in that game, and somewhat quietly, he sits third among QBs in rushing yards per game. 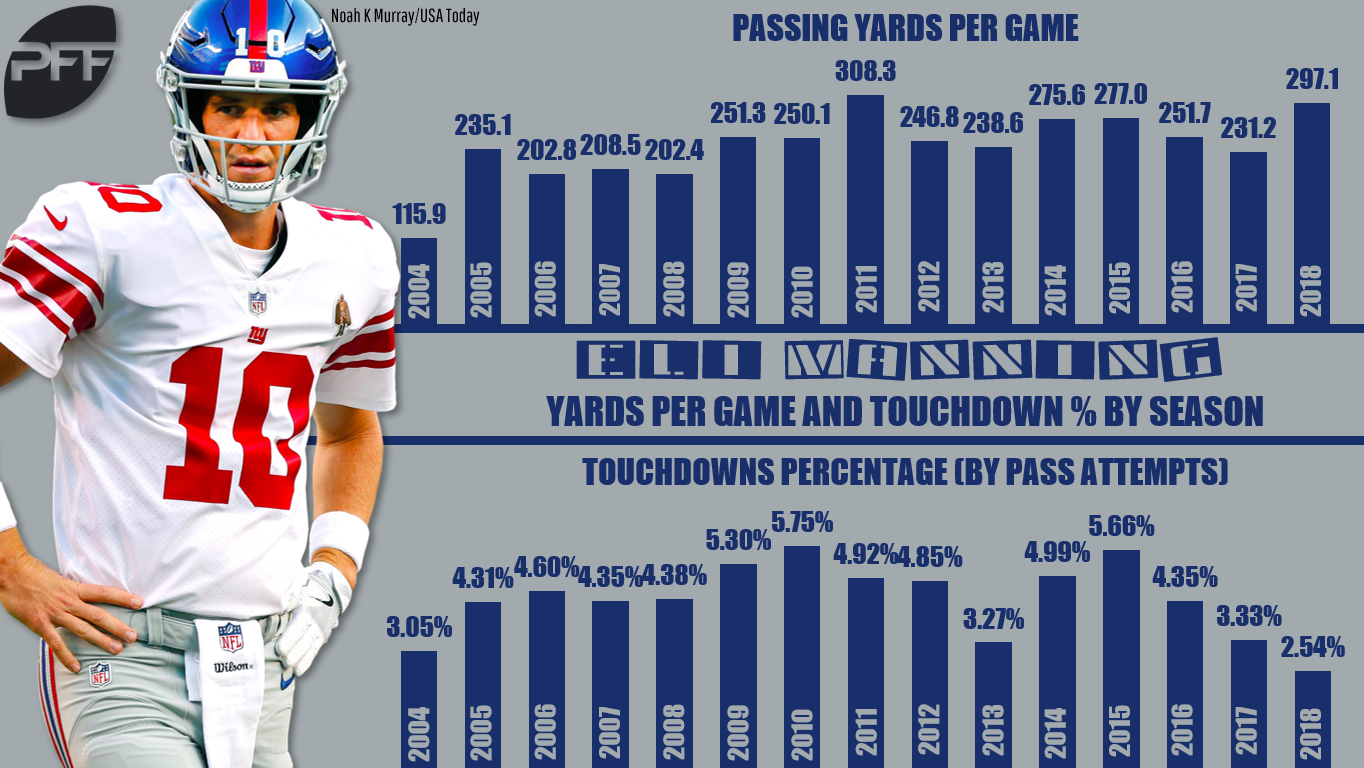 It’s laughable now, but a primetime matchup between the Giants and 49ers has typically been must-see television over the years. This year, not so much. Pinning one’s hopes to Manning in fantasy football is always risky these days, particularly coming off yet another underwhelming performance, but it’s not all that scary of a proposition this week.

San Francisco owns our very worst pass-coverage grade on the season. The 49ers have allowed multiple passing scores in every game except Week 5 against rookie Josh Rosen and this past Thursday against Derek Carr. As for Manning, he is actually averaging his most passing yards per game (291.1) since 2011 despite taking a league-high 31 sacks (some of those are undoubtedly on Manning for holding the ball too long). However, his touchdown rate (2.5%) also marks the lowest of his 15-year career and about half his career average (4.6%). Some positive regression is on the way, perhaps this week.