With another week of action behind us, and some more fresh stats to analyze, I’m here to help you with your toughest fantasy football start/sit decisions for Week 7 of the NFL season.

Notes: If you don’t see one of your players mentioned below, please refer to our rankings. Once we get to the “deep leagues” section, we’ll only look at starts, because there’s not much benefit in telling you to sit guys like Phillip Dorsett at this point.

Starting last week with Stefon Diggs, Patrick Peterson (the NFL’s best shadow cornerback) is back to shadowing opposing teams’ top outside wide receivers (in this case Demaryius Thomas). This should mean more volume funneled toward Sanders in the slot. Sanders totals 23 targets over the last two weeks (next-closest Broncos receiver only has 11) and runs 63% of his routes from the slot. Arizona is giving up the sixth-most fantasy points per game to opposing slot wide receivers.

Hopkins projects to be shadowed by Jalen Ramsey this week, which, on the surface, looks like a terrible matchup – Ramsey was our second-highest-graded cornerback last year. But Ramsey is banged up with a knee injury and Hopkins averages 17.7 fantasy points per game in his last three games against Ramsey and the Jaguars.

Njoku leads the team with 19 targets over the past two weeks, one more than Jarvis Landry and eight more than Antonio Callaway. Despite seeing 10 fewer targets than the combination of both wide receivers, Njoku totals 13 more yards (124 total) and the same number of touchdowns (two). Njoku has the matchup in his favor as well, up against a Tampa Bay defense currently surrendering the most fantasy points per game to opposing tight ends.

Last week, Gordon’s snap share jumped from 26% to 80% and he saw a team-high nine targets. On Tuesday, head coach Bill Belichick said of Gordon, “I would just say his role is expanding weekly and we’ll just see how it all plays out.” This week he gets ready to face a Chicago defense giving up the third-most fantasy points per game to opposing outside wide receivers. 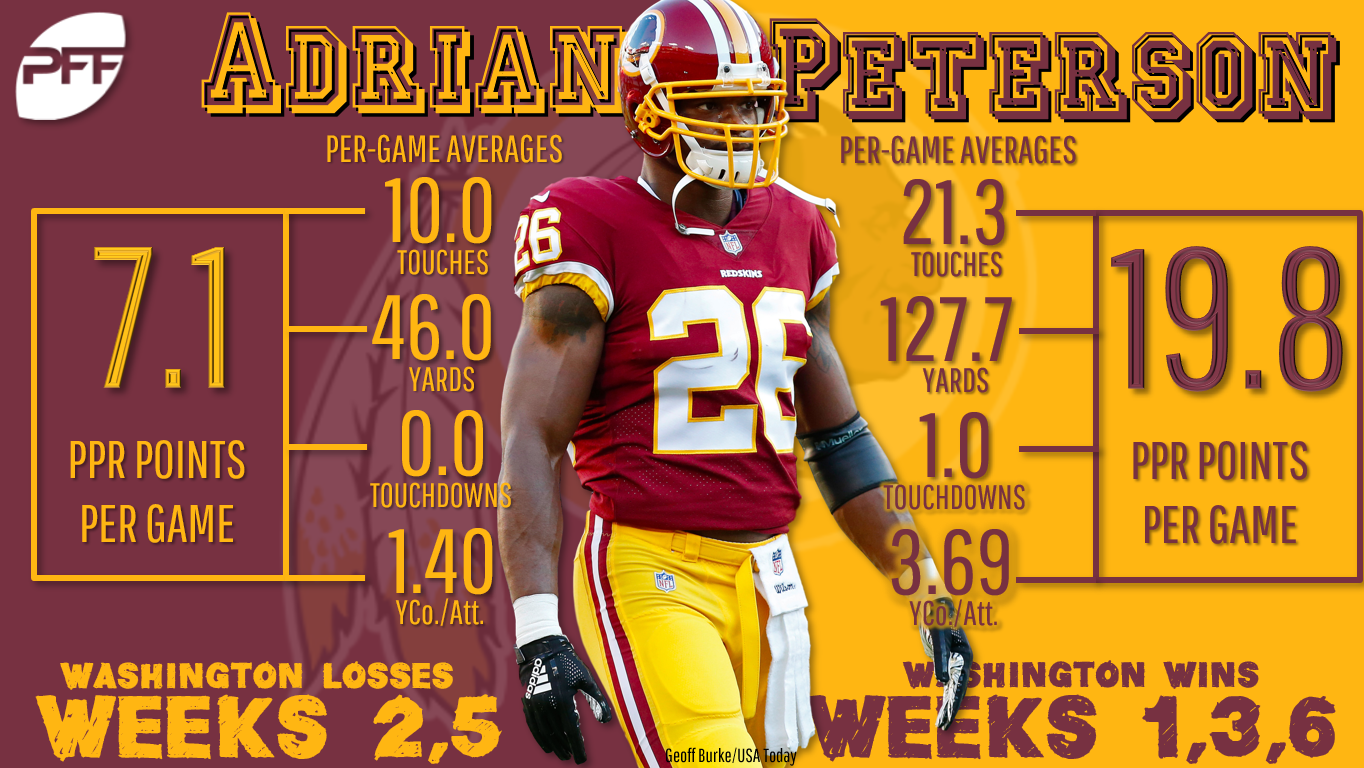 In his first game back, Olsen played on 59 of the team's 60 snaps and saw seven targets. That’s a good sign, but he’s still just a fringe TE1 this week in a brutal matchup against the Eagles. After holding Eric Ebron and Austin Hooper to a combined 13.7 fantasy points, Philadelphia ranks second-best in schedule-adjusted fantasy points per game to opposing tight ends.

Collins has struggled in terms of volume (ranking 30th in expected fantasy points per game) and efficiency (averaging 3.6 yards per carry), but finally had a big game, totaling 54 yards and two touchdowns on 19 touches in a 21-0 rout against Tennessee. I’m less bullish this week as underdogs against a Saints defense that’s leading the league in yards per carry allowed (2.78).

Although Mayfield’s dealing with an ankle injury and has somewhat underwhelmed (at least by my lofty expectations), his matchup is ideal, against Tampa Bay’s borderline historically bad pass defense. They’d rank worst among all pass defenses this past decade in opposing passer rating (129.5), passing yards allowed per game (366.8), passing touchdowns allowed per game (3.2), and interceptions percentage (0.5%). While their pass defense is embarrassing, their run defense has been much better, ranking fourth-best in yards per carry allowed (3.47). This should lead to a more pass-heavy approach and good fantasy production from Mayfield.

As outlined here, Cohen’s usage has been phenomenal over his last two games. Cohen was productive as well, totaling 295 yards and two touchdowns, while helping Mitchell Trubisky to post his two best career games in terms of yardage and fantasy points. Volume and efficiency should be good again this week against a New England defense that has given up the second-most receiving fantasy points per game to opposing running backs since Week 1 of last year.

Coutee has had a target market share of 36%, 16%, and 20% over the past three weeks. With Jalen Ramsey on DeAndre Hopkins and Will Fuller still banged up, Coutee is a good play (low-end WR4), but if slot cornerback D.J. Hayden is out again this week for the Jaguars, he becomes a great play. Last week against the Jaguars, Cole Beasley caught all eight of his slot targets for 95 yards and two scores.

Barber finally saw his best usage of the season, totaling 16.9 expected fantasy points, or 5.7 more than his next-best game. He was finally productive as well, racking up 106 yards and a score. More usage (as well as good productivity) makes sense this week given the matchup. Cleveland ranks second-best in opposing passer rating (76.8) and best in schedule adjusted fantasy points per game to opposing quarterbacks. Meanwhile, to running backs, they rank 10th-worst in yards per carry allowed (4.67) and third-worst in rushing fantasy points per game allowed.

In Week 6, Mack drew the start and saw good usage despite it being his first game back following a five-week injury-related absence. In total, he saw 12 of the team’s 19 carries and two of the team’s six running back targets. As 7.5-point favorites against the Bills, Mack is a high-end RB3.

Being one of the most efficient running backs in the league doesn’t mean much when you’re averaging 6.8 carries and 2.8 targets per game. 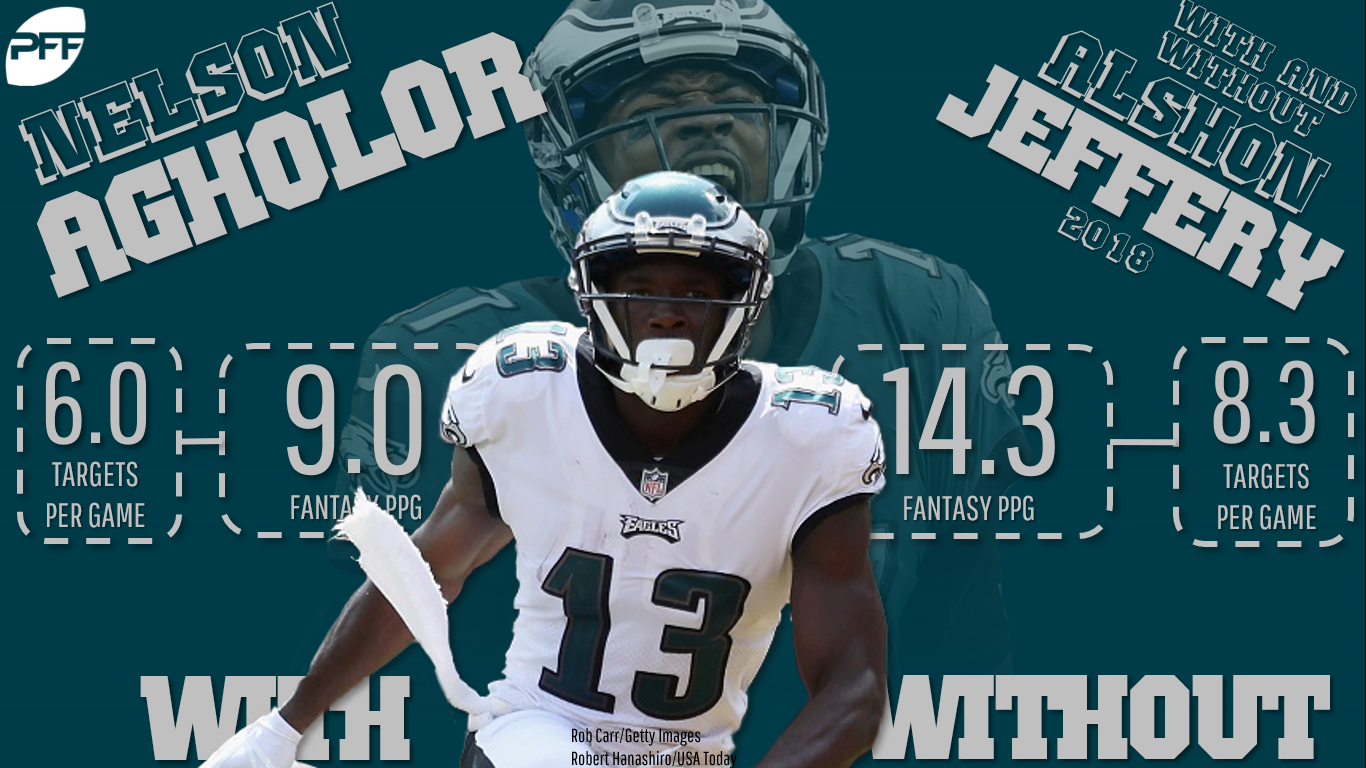 Williams totaled 20.1 fantasy points but on only four targets last week, which screams “regression to the mean.” He hasn’t caught more than three passes in a single game all year. Even his cornerback matchup this week is tough, running 83% of his routes from the slot and lined up to Philip Rivers’ right, meaning only 17% of his routes against Malcolm Butler.

With Marlon Mack back, Hines saw his snap share fall to 43% after averaging 69% over his previous three games. Despite another game with ideal gamescript (for Hines), in Week 7 he saw only three carries and three targets, after averaging 8.0 and 8.3, respectively, the prior three weeks. He’s an easy fade this week as 7.5-point favorites against the Bills.

Fitzgerald is finally off the injury report, but I’m not going to trust that he’s back to normal and ready to be started until I first see it in the stat sheets. He hasn’t topped 40 yards since Week 1 and averages just 5.8 fantasy points per game over this stretch.

With Derek Anderson starting for the Bills, Benjamin may now finally be worth a start. He has an established rapport with Anderson, from their time together in Carolina. Anderson has played in four games since 2014 where he attempted at least 20 passes. Benjamin averaged 16.1 fantasy points per game in those games, with a low of 12.0. The matchup is above-average, and I suspect efficiency and volume might be better without Josh Allen. The rookie is our worst-graded quarterback of 32 qualifying and ranks first in sacks plus runs per dropback.

Quincy Enunwa is out for Week 7 and both Terrelle Pryor and Robby Anderson missed practice Wednesday. Kearse caught nine of 10 targets for 94 yards last week, and now gets an even softer draw against the Vikings. Minnesota has given up the fifth-most fantasy points per game to opposing slot wide receivers, which is where Kearse runs 80% of his routes.

Wilson played on just 44% of the team’s snaps through the first three weeks of the season but has seen that number jump to 76% over the last three weeks. He’s led the receivers in expected fantasy points in each of those latter three games, with a 30% target market share over that stretch. He was finally productive last week, totaling 33.0 fantasy points. While the 138 yards after catch isn’t repeatable (though he is one of the league’s best receivers after the catch), I do think his volume will continue to be better with QB Ryan Tannehill out of the picture. He also has our third-best wide receiver matchup of the week. 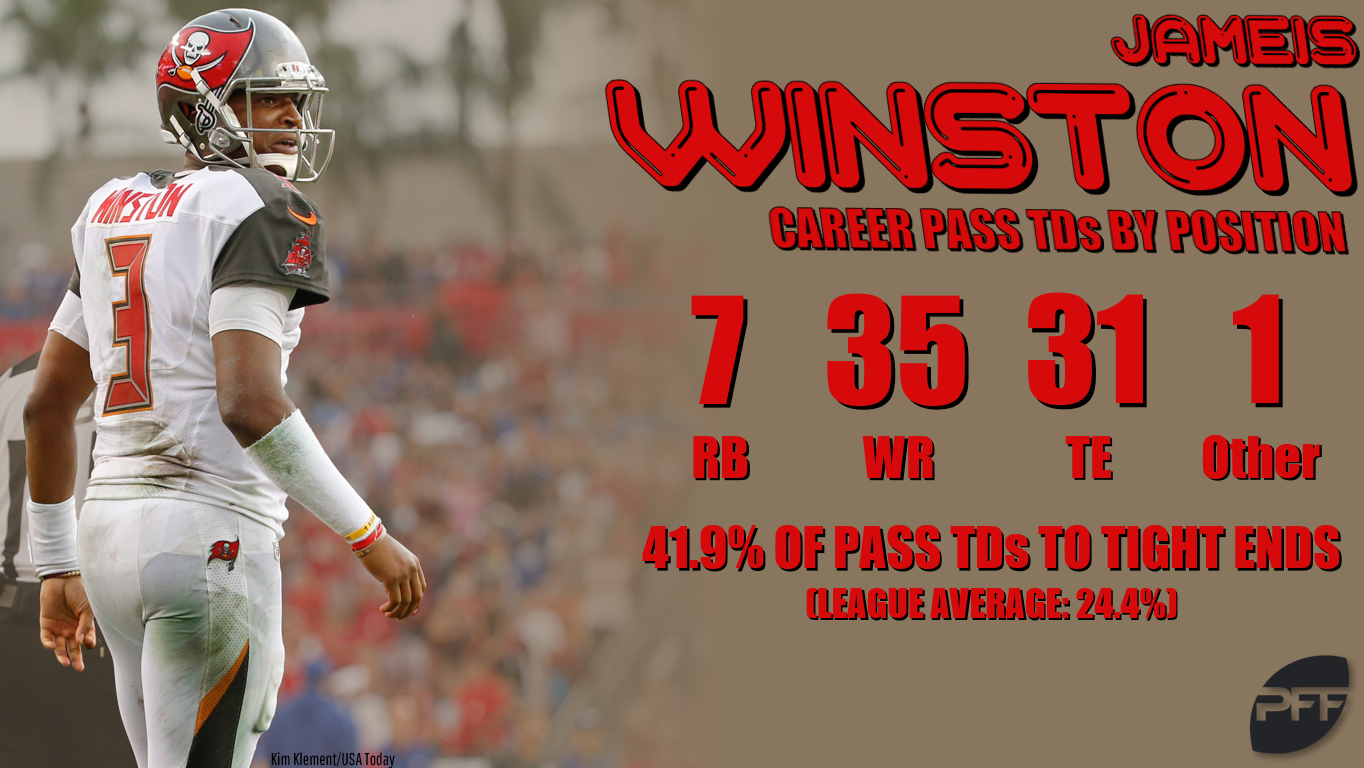 As outlined here, Jameis Winston is one of the most efficient quarterbacks when targeting tight ends, but struggles nearly everywhere else. 41.9% of Winston’s career pass touchdowns have gone to tight ends, which ranks most among 50 qualifying quarterbacks this past decade. Howard is off the injury report and should slide back into his typical usage (70.0% of the team’s snaps). I like his matchup this week, after Cleveland lost their top tight end defender and our highest-graded coverage linebacker in Joe Schobert.

Beathard averages 20.1 fantasy points per game across the seven games he's started and finished throughout his career, which is more than Tom Brady and Drew Brees over the same span. In a neutral (at worst) matchup, where San Francisco will need to go pass-heavy, I like Beathard’s chances of putting up mid-range QB2 numbers.