Metrics that Matter: Which corners shadow most effectively?

In a recent article, we explored a new method of measuring cornerback play. I hope it was interesting but will admit it might not have been especially useful for fantasy football. Today’s article, however, is different.

Using our Shadow Matrix, the most frequently shadowed wide receiver last year was Mike Evans (nine shadow games) and the cornerback most frequently in shadow coverage was Patrick Peterson (11 shadow games). Right behind Peterson was the Jets’ Morris Claiborne with 10 shadow games (tied with three other cornerbacks). For a player like Evans, whether you’re being shadowed by Peterson or Claiborne will mark a dramatic difference in how many points we’re projecting in a given week. For instance, out of 91 qualifying cornerbacks last season, Peterson ranked fourth-best in yards allowed per route in coverage, while Claiborne ranked 44th.

Today, I want to take a deeper look into our shadow numbers to determine which cornerbacks were most effective in shadow coverage, and which ones we should be most fearful of next season. In this exercise I’m contrasting a cornerback’s average yards allowed per route in coverage (in shadow games) with his expected yards allowed per route in coverage (based on the yards per route run average of all wide receivers they’ve faced in shadow coverage). By contrasting these two numbers to create a differential, we can see which cornerbacks we should be most cautious of playing a wide receiver against. (Notes: I chose yards per route run rather than any other metric for its superior stability year-over-year.)

Among all cornerbacks to shadow in at least five games last season, from best to worst, here’s who stands out by yards allowed per route in coverage over expectation: 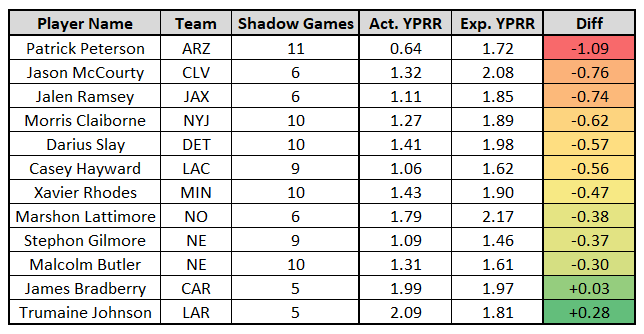 Patrick Peterson – Peterson wasn’t only our best shadow cornerback last season, but he might be the best cornerback in the league. Over the past three seasons, and among 106 qualifying cornerbacks, Peterson ranks first in yards allowed per route in coverage, first in fantasy points allowed per route in coverage, and 11th in opposing passer rating. This becomes all the more impressive when we realize just how frequently he’s asked to shadow, and so frequently against the best wide receivers in the league. Last season, Peterson held all of Alshon Jeffery, Pierre Garcon, T.Y. Hilton, Sammy Watkins (twice), Marvin Jones, Marqise Lee, Mike Evans, and Dez Bryant under 30 total yards in shadow games, with the final four totaling a combined zero yards on 85 total routes. Only DeAndre Hopkins (65 yards) and Marquise Goodwin (55 yards on one reception) topped 30 yards against his coverage in shadow games. As evidenced by the chart, not only did he rank best, but best by a landslide.

Jason McCourty – You’ll notice both of New England’s primary outside cornerbacks made this list, but so too did the newly acquired McCourty, who fared much better than both Stephon Gilmore and Malcolm Butler. New England ran man coverage at the highest rate in the league, frequently asking all of their cornerbacks to shadow, rather than just playing sides. It appears McCourty will be a good fit for this defense, potentially an upgrade over Butler, and a massive steal for Bill Belichick, who gave up just a sixth-round pick to acquire McCourty and a seventh two weeks ago. Butler, who left for Tennessee, struggled in shadow coverage by comparison. McCourty also graded out much higher than Butler last season as well – 27th-best vs. 51st of 121 qualifying.

Jalen Ramsey – In just his second season in the league, and at only 23 years old, Ramsey managed to far exceed our lofty expectations for him, ranking third-best here and grading out third-best among 121 qualifying cornerbacks. He didn’t seem to have a problem facing off against some of the best wide receivers in the league either, shadowing T.Y. Hilton (twice), Larry Fitzgerald, DeAndre Hopkins, A.J. Green, and Jermaine Kearse. Ramsey held Fitzgerald and Green to a combined two yards on 35 routes, while only Hopkins (80) topped 50 yards against him in shadow coverage.

Next season, I’d be cautious of starting wide receivers we have projected to be shadowed by any of these cornerbacks, as well as Darius Slay, Casey Hayward, and Xavier Rhodes, who also have histories of success against some of the league’s best wide receivers. However, on the other end of the spectrum, we have two cornerbacks who actually yielded a positive impact on fantasy production from the wide receivers they’ve faced:

Trumaine Johnson and James Bradberry – Johnson graded out 69th in PFF coverage grade last season, but ranked top-30 in each of the two seasons previous. Johnson averaged 1.33 yards allowed per route in coverage last season, but just 0.97 across the two seasons prior. Perhaps he struggled adjusting to Wade Phillips’ new defensive scheme in 2017, or perhaps his play fell off for other reasons. Either, way it will be interesting to see who the Jets treat as their CB1 following Morris Claiborne’s impressive year as the team’s primary shadow cornerback. Whereas Johnson’s play fell off last season, Claiborne saw a marked improvement in 2017. He averaged 1.05 yards allowed per route in coverage last year with the Jets, but 1.21 over the two seasons prior with Dallas. Similarly, Bradberry’s play dropped off significantly from an impressive rookie year. Bradberry was our 25th-highest-graded cornerback in 2016, but ranked 12th-worst last season. I’m not convinced these are cornerbacks to pick on next season, but it is something to keep in mind moving forward.