With another week behind us, and some more fresh stats to analyze, I’m here to help you with your toughest fantasy football start/sit decisions of the week for Week 5.

Through four weeks, Edelman is averaging 8.0 targets per game – an incredible figure once more context is added. Three of Edelman’s four games have come in massive blowout victories where the Patriots were never forced to pass. In one of those games (Week 3), Edelman saw 10 targets despite playing in just two quarters. On top of all this, Edelman has had a near-league-high six targets negated due to penalty (second-most). Though we should see another blowout in New England’s favor this week, expect similarly good volume and even better production for Edelman, against a Redskins defense that is giving up the most fantasy points to wide receivers on short passes and the fifth-most fantasy points to opposing slot wide receivers.

Williams practiced in full Wednesday and should be started with confidence if he’s active Sunday. Williams was seeing terrific usage before his injury, averaging 17.2 expected fantasy points per game through the first two weeks of the season, which ranked fifth-most among running backs. He’ll get a favorable matchup this week, against a Colts defense that ranks fourth-worst in yards allowed per carry and 10th-worst in schedule-adjusted fantasy points per game allowed. 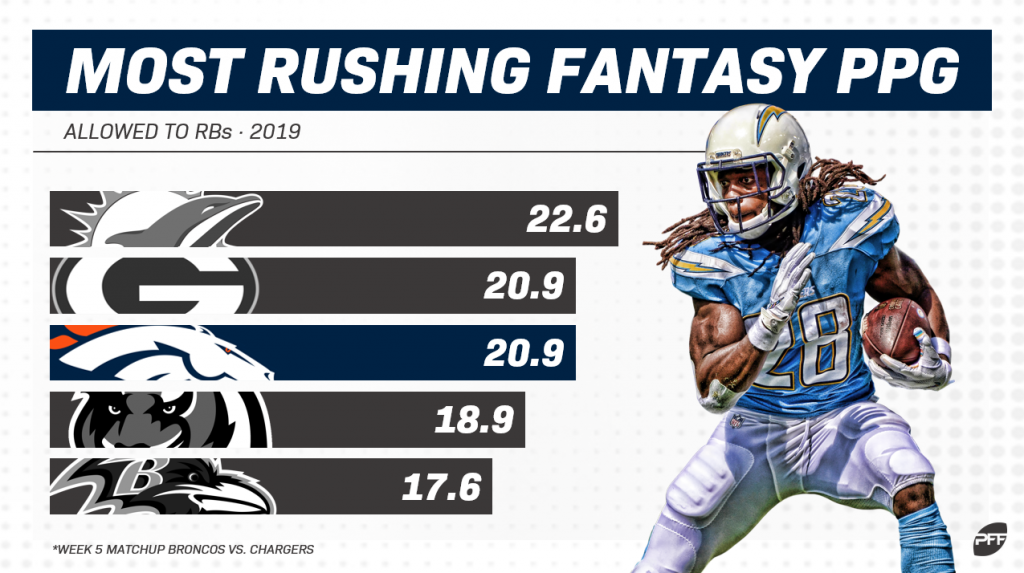 Congratulations Gordon drafters, your day has finally arrived, and sooner that most of us expected. Per head coach Antony Lynn, Gordon is still the “starter” and the team’s “No. 1 running back.” That means, at a bare minimum, Gordon will be the team’s primary early-down workhorse. That will be enough for Gordon to come away with a fantasy RB1 performance this week. The Chargers are playing at home, favored by 6.5 points, against a Denver defense that is giving up the third-most rushing fantasy points per game to enemy running backs.

Jacobs ranks 11th in carries per game (15.5), but just 34th among running backs in XFP per game (9.6). Though Jon Gruden promised more passing-down work for Jacobs heading into Week 4, he saw just two targets on the day, bringing his season-long total to five. With Jacobs so overlooked in the passing game, he’s too risky to start this week, as 5.0-point underdogs against a ferocious Chicago run defense.

Cooper might not be an outright “sit,” but he is worth bumping down to the mid-WR2 range this week. The Packers are giving up the fewest fantasy points per game to opposing wide receivers, due in a large part to top-10-graded cornerback Jaire Alexander. Through four weeks, Alexander has been thrown at 27 times in coverage but has surrendered just 125 yards. With Alexander expected to shadow Cooper in Week 5, we could be in line for another one of Cooper’s infamous milk carton games (where he goes missing).

McLaurin has been phenomenal to start the season, but he’s banged up and expected to draw a worst-possible matchup against Stephon Gilmore in shadow coverage. In nine of Gilmore’s last 10 shadow games, he’s held the receiver he’s covered to under 50 yards receiving. McLaurin is just a low-end WR3 this week.

Jones stole the show Sunday, finally seeing a starter's workload, drawing 20 touches and turning that into 82 yards and a score. He now, perhaps somewhat shockingly, ranks as our single-highest-graded running back. That’s all fine and good, but he’s seen just three targets all year. That means he’s too risky to start this week, up against a New Orleans Saints defense that ranks best in rushing fantasy points per game allowed over the past two seasons.

In Week 1, Sam Darnold targeted Crowder on a whopping 15 of 41 throws (37%). Over Darnold’s last five games, Anderson averages 9.2 targets and 16.0 fantasy points per game. With Darnold expected to make his return this week, both wide receivers are flex-worthy if he plays. Although Crowder started off the season in the slot, an injury to Quincy Enunwa has since forced Braxton Berrios into the lineup and Crowder to the outside. This is where Anderson has run 84% of his routes this season, while Crowder ran 70% of his routes from the outside in Week 3. Philadelphia, meanwhile, for the third consecutive season, is giving up the most fantasy points per game to opposing outside wide receivers.

Quietly, Sanders is averaging 8.5 targets and 16.2 fantasy points per game to the start the season. With Courtland Sutton expected to draw shadow coverage from top cornerback Casey Hayward (as he did in both games last year), expect this difficult matchup to funnel more targets to Sanders. Against UDFA rookie and bottom-25-graded Brandon Facyson, it should be a productive day.

Oakland is giving up the eighth-most fantasy points to opposing wide receivers and the most fantasy points to receivers on deep passes. Robinson leads the team and ranks ninth among receivers in deep targets per game (2.25). Last week, Robinson was Chase Daniel’s most targeted receiver, drawing seven of 30 attempts (23%). With Daniel starting in place of Mitchell Trubisky this week, I think it’d be foolish not to treat this is an upgrade for Robinson.

After a 21-carry, five-target Week 4 that netted just 9.7 fantasy points, Montgomery is an ideal regression candidate heading into Week 5. Over the last three weeks he ranks 10th among running backs in XFP per game (16.5), and while seeing his snap share climb in every game thus far. He’s been the league’s most inefficient fantasy running back, ranking worst in fantasy point differential (-3.6),  but he’s far too talented not to see that number regress. Expect good volume and efficiency this week, with Chicago favored by 5.0 points against a Raiders defense that ranks third-worst in run defense grade.

As I argued just a few weeks ago, if James Conner is out, Samuels isn’t just a fantasy start, he’s a borderline fantasy RB1. After a 10-carry, eight-target Week 3, even if Conner plays, Samuels should still be considered as a borderline RB2. Baltimore ranks third-worst in yards allowed per carry and seventh-worst in fantasy points per game allowed to opposing running backs. 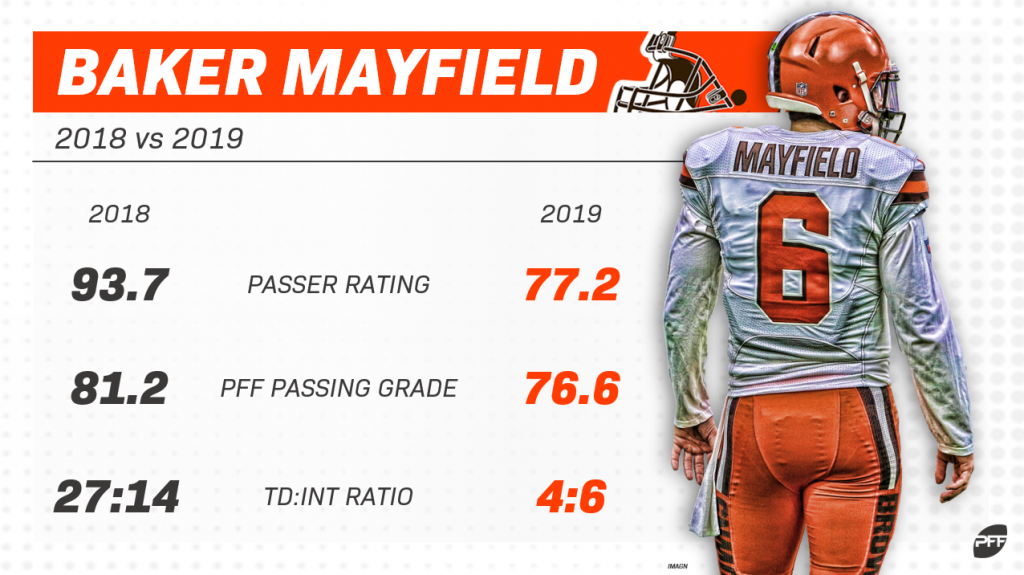 Through four games, Mayfield ranks just 28th in fantasy points per game and 31st in passer rating. He’s a risky start this week, against a quietly great San Francisco defense. Their defense ranks fourth-best in PFF grade and third-best in opposing passer rating.

Murray has been an afterthought in this offense, averaging just 4.3 carries and 1.3 targets per game. You may have drafted him as though he was going to be the Mark Ingram of this offense, but Sean Payton had other plans. He’s an easy fade against a Tampa Bay defense that ranks best in yards allowed per carry, PFF run defense grade, and schedule-adjusted fantasy points per game allowed.

Though Walker has been much better than Howard, he has the only tight end matchup that’s as comparatively difficult. Buffalo is giving up a league-best 4.9 fantasy points per game to opposing tight ends, which includes just 48 yards to Evan Engram in Week 2.

Murray has no doubt underwhelmed given lofty expectations for his rookie year, but he's been a consistent high-floor play, reaching at least 16.0 fantasy points in every game thus far. Now, he gets his best matchup of the season, against a Bengals defense that ranks third-worst in opposing passer rating (115.3) and fantasy points allowed per dropback (0.58). He’s a fine streamer this week, as is Andy Dalton on the other side of the field (Arizona ranks second-worst in both stats just referenced).

Through four games, Thompson is averaging 4.0 carries, 7.0 targets, and 74.3 yards per game. Like in each of Washington’s first four games, he’ll benefit from negative gamescript this week, and massively so, as 15.5-point underdogs against the Patriots. Thompson is just a desperation play, ranked as a low-end RB3, but he should out-score Adrian Peterson, given the spread and the fact that New England ranks top-five in yards allowed per carry.

Valdes-Scantling totaled 17.3 and 18.9 XFP over his last two games, or the seventh-most among wide receivers over this span. If Davante Adams plays, he’ll get a top matchup against a Dallas defense giving up the seventh-most fantasy points to opposing right wide receivers. If Adams is out, he’s the safest bet to lead the team in targets, in a game Aaron Rodgers will likely be forced to pass.

If streaming tight ends or looking for a spot-start at the position, I’d consider Doyle this week. With T.Y. Hilton unlikely to play, more targets will be funneled to the tight ends, and while both Doyle and Eric Ebron should benefit, I prefer Doyle. Last week, Doyle out-targeted Ebron (six to five) while also running 11 more routes (31 to 20). For the second straight season, the Chiefs rank bottom-four in fantasy points per game allowed to opposing tight ends.