Hello, and welcome to Week 5 of XFP – the Expected Fantasy Points Report. If you’re unfamiliar with expected fantasy points, I offered up an in-depth explanation earlier this offseason.

Through four weeks of action, here are the top-25 players in expected fantasy points (XFP) per game:

[Note: Full-season XFP is now available for download in spreadsheet form. We’ll be releasing it each week in our PFF Elite Facebook Group. If you’re not already an Elite subscriber I highly recommend joining.] 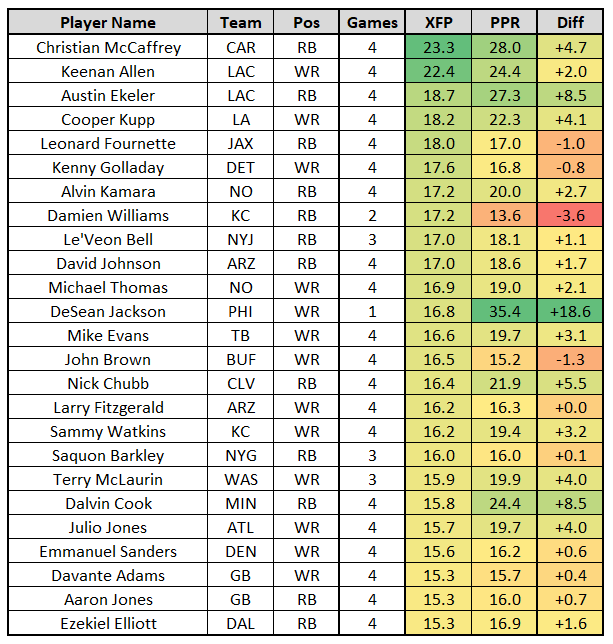 Through four weeks, Ekeler ranks second in XFP per game (18.7), second in fantasy points per game (27.3), first in fantasy point differential (+8.5), and second in PFF grade. Well, I suppose it was fun while it lasted. With Melvin Gordon returning to the team, and as the “starter,” Ekeler’s value plummets, but by how much? Ekeler currently holds a 73% XFP market share over Los Angeles’ backfield. If Los Angeles opts for a 60/40 split in Gordon’s favor, we can expect 15.3 XFP per game for Gordon and 10.2 XFP per game for Ekeler. For perspective, those numbers would rank 12th-best and 30th-best respectively.