Fantasy Football: The Guide to Selecting 1.07 in 2021 Best Ball Drafts

Let's dive into the routes available from the 1.07 draft slot — we've already gone over the best plans for the first six selections as part of PFF’s inaugural Best Ball DraftKit. Drafting at the 1.07 creates an easy path to stack the Arizona Cardinals, Denver Broncos, Las Vegas Raiders, Seattle Seahawks and Indianapolis Colts. 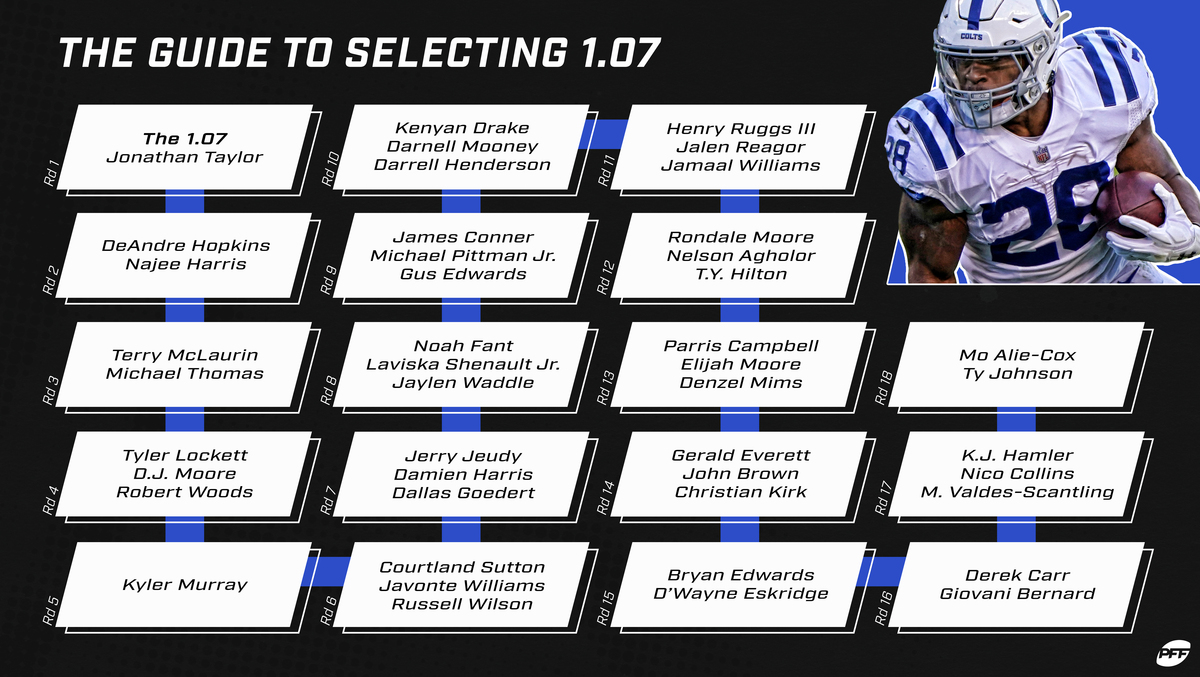 Drafting from the 1.01-1.06 draft slots has yielded stud running backs so far, and the 1.07 is no different. Jonathan Taylor is the selection here — he has all the tools and talent to be fantasy’s next superstar running back.

Taylor has the privilege of running behind PFF’s second-highest-ranked offensive line, making him a solid bet to finish as a top-eight fantasy running back. His only concern is Nyheim Hines, who figures to siphon away touches in the passing game.

Still, from an overall volume perspective, don’t overthink Taylor’s role in the this backfield because of Hines or Marlon Mack. Even with the slow start in 2020, Taylor still finished eighth in total touches (268) and 11th in touches per game (17.7). Those numbers can only go up in 2021.

The days of drafting Najee Harris in Round 3 of summer best ball drafts are long gone. The Pittsburgh Steelers rookie running back has skyrocketed up draft boards into the middle of the second round because of his projected bell-cow role. PFF’s fantasy projections have Harris slated to see nearly 17 touches per game (eighth).

Volume is more important to a running back’s success than efficiency, which is why Harris will rise above any problems created by the Steelers' 29th-ranked offensive line unit.

Starting a draft with back-to-back workhorse running backs is a tried and true approach to building a championship roster, but target-magnet DeAndre Hopkins makes a strong case in this range as the last wide receiver from Tier 1.