The best and worst fantasy football matchups of Week 13 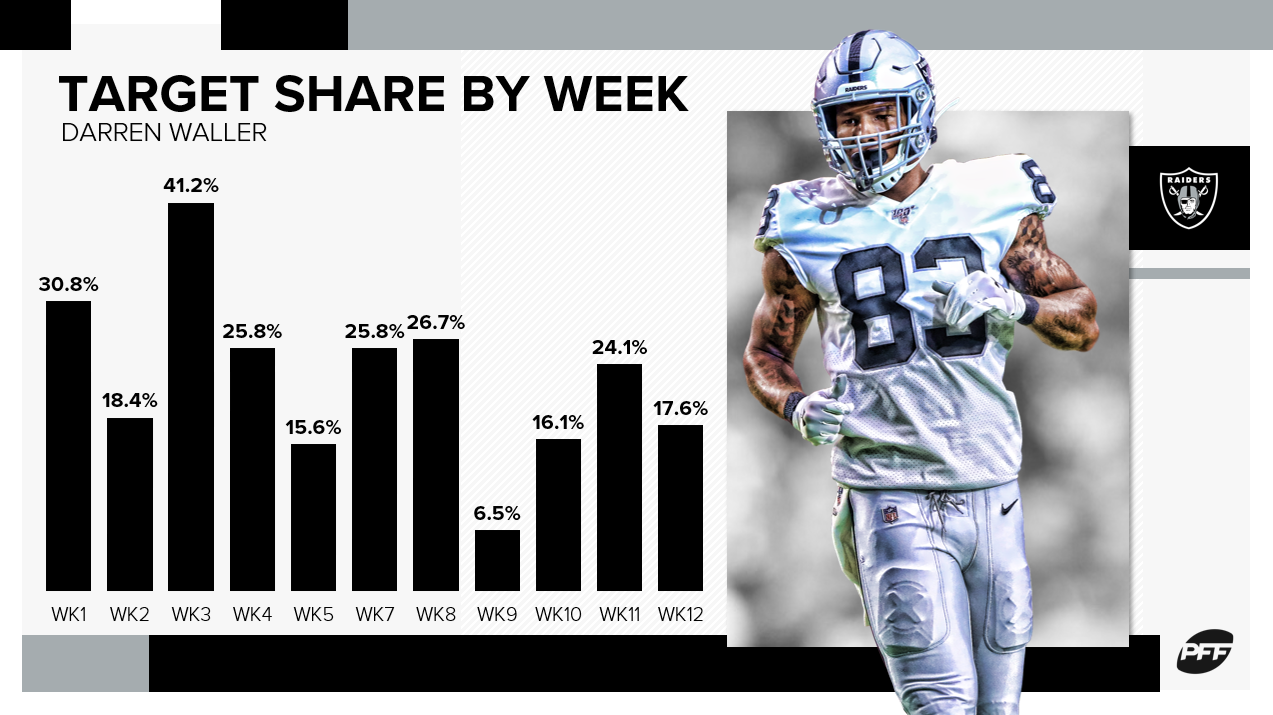 Darren Waller, TE, Oakland Raiders (@ KC): Hunter Renfrow took a little bit to become fully integrated into the Raiders offense — he only topped 4 targets in a game once through Week 8, but has had 5 or more in four games since. Meanwhile, Waller only had fewer than 7 targets once in that early stretch, but has had 7 or fewer four times since Renfrow has come on. Well, Renfrow is out for at least the next few weeks with a broken rib and punctured lung. On top of that, the Chiefs have allowed the sixth-most points per game to opposing tight ends, per our points allowed matchup chart, including big recent games to Hunter Henry, Kyle Rudolph, and Anthony Firkser.

Sam Darnold, QB, New York Jets (@ CIN): The list of quarterbacks with more fantasy points than Darnold over the last two weeks is: Lamar Jackson. Extend it to three weeks and you add Josh Allen to that list. But Darnold has topped 20 fantasy points in three straight games. That’s obviously come as the Jets schedule has lightened up considerably (he’s faced the Giants, Washington, and Oakland over those three weeks), but then this week it gets even better, facing a Cincinnati team that had allowed five straight quarterbacks to top 20 fantasy points before facing the Steelers last week.

David Montgomery, RB, Chicago Bears (@ DET): This is the most “fool me twice, shame on me” scenario possible, as Montgomery was the mismatch of the week in this space only three weeks ago against the same opponent, only to rush for 70 scoreless yards and get no receptions. And things have gotten even worse for Montgomery since, with 27 carries for 53 yards in the two games since then. But I’m going back to the well here, because … well, everything that applied before still applies now. The Lions have allowed the second-most PPR points per game to opposing running backs this year, and the only starting backs they’ve held in check are Montgomery in Week 10 and whichever of Derrius Guice and Adrian Peterson you considered the Washington starter last week. If it’s going to turn around for Montgomery, this is the game.

Gerald Everett, TE, Los Angeles Rams (@ ARZ): Don’t let the Cardinals’ week off make you forget the way they perform against tight ends; they’ve allowed 4.0 more points per game to the position than any other team. And while the Rams offense has cratered in recent weeks, it’s also come against a tough slate of defenses (Pittsburgh, Chicago, and Baltimore the last three weeks). The Cardinals don’t pose nearly the same threat.

Dak Prescott, QB, Dallas Cowboys (vs. BUF): Rushing has been a big part of Prescott’s career so far, with 6 rushing touchdowns and at least 280 rushing yards in each of his first three years. He’s only very slightly off those respective paces this year, but this week he faces a Buffalo team that hasn’t allowed a quarterback to rush for more than 35 yards all year (and only Carson Wentz has topped 14). And for the full picture, Ryan Fitzpatrick (no really) is the only quarterback all season to put up more than 18.1 fantasy points against the stout Bills defense. 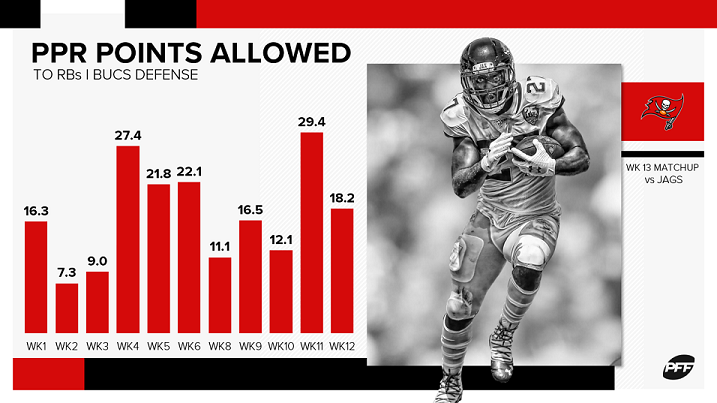 Leonard Fournette, RB, Jacksonville Jaguars (vs. TB): By now, you know that if you want to attack the Buccaneers, you throw the ball. They’ve allowed the most fantasy points per game to wide receivers and the second-most to quarterbacks and tight ends, but the third-fewest to running backs despite facing arguably the league’s toughest slate of opposing backs on the year (Christian McCaffrey and Alvin Kamara twice each, plus Tevin Coleman, Saquon Barkley, Todd Gurley, Chris Carson, and Derrick Henry). As good as Fournette’s been (and especially last week, scoring his second and third touchdowns of the year), this is a week to fade him.

Courtland Sutton, WR, Denver Broncos (vs. LAC): By raw fantasy points, Sutton had a good performance last time he faced the Chargers, catching 4 balls for 92 yards and a score for 19.2 PPR points. But 70 of those yards and his touchdown came in coverage from S Roderic Teamer, who between injury and playing time has been basically phased out of the Chargers defense — he’s played all of 5 defensive snaps since Week 8. Per our WR/CB matchup chart, Sutton will likely see a mix of Desmond King and Casey Hayward in coverage, and if he does see a safety, it’s as likely as anything to be the returning Derwin James. And all of that assumes Brandon Allen can get him the ball in the first place — based on last week's 82 passing yards, that might not be the case.

George Kittle, TE, San Francisco 49ers (@ BAL): The Ravens struggled against tight ends early in the year, allowing 15.9 and 17.2 points to Travis Kelce and Ricky Seals-Jones in Weeks 3 and 4, respectively. Since then, the best game against them from a tight end was Tyler Eifert’s 2-catch, 20-yard, 1-touchdown game in Week 10. Nobody has topped 34 yards since Seals-Jones. And the team as a whole has allowed only 12.4 points per game since Marcus Peters came to town before Week 7. Obviously, you’re still starting Kittle in season-long, but you should lower expectations for him and maybe fade him in DFS.