As we head into the Week 6 weekend action, it’s time to look at injuries around the NFL and how they impact fantasy football decisions.

Injuries are an unfortunate reality in football, which means they are also something we have to deal with in fantasy football. Not even the most expertly drafted fantasy roster is immune to injuries. Every owner is going to have to surf the waiver wire for replacement production at some point this season – if your time hasn’t come yet, it will.

This fantasy football injury report will serve as your one-stop shop for injury updates, waiver wire ideas, and start-sit recommendations. Before I get into specific player analysis, let’s take a look at the Week 6 slate. Knowing when the games are being played is vital to making start-sit decisions for injured players. One of the most important rules in fantasy football: always put your non-early slate question-mark players in the flex. Doing this provides you the most options to replace that player in your lineup if he ends up being a late add to the inactive list before game time.

Devonta Freeman (questionable, foot) hasn’t participated in practice this week. Per head coach Dan Quinn, the team is taking a “wait and see” approach. Freeman would be part of a frustrating (for fantasy) committee even if he gets cleared to play. I would sit him this week.

(Sunday update: Freeman is OUT. Tevin Coleman will start and Ito Smith will also likely see enough touches to be flex-worthy if you are strapped for lineup options.)

Mohamed Sanu (questionable, hip) has been a limited participant in practice but signs point to him playing Sunday. He has a great matchup against a porous Tampa secondary. Plan on him being available as a flex option.

O.J. Howard (questionable, knee) has been limited in practice this week, but is “trending toward playing,” per ESPN reports.

Isaiah Crowell (ankle) has been added to the injury report as a game-time decision after being limited in practice by an ankle injury Friday. Bilal Powell is a fantastic fill-in option, fresh off a 20/99 line against Denver in Week 5. Somewhat surprisingly, Powell is only owned in 59% of Yahoo leagues so be sure to check your waiver wires and don’t assume he’s unavailable.

T.Y. Hilton (week-to-week, multiple injuries) hasn’t participated in practice this week and is expected to miss this weekend’s game. Chester Rogers has seen 11 targets in consecutive games and is the player to chase if you need a substitute.

(Sunday update: Hilton is officially OUT.) 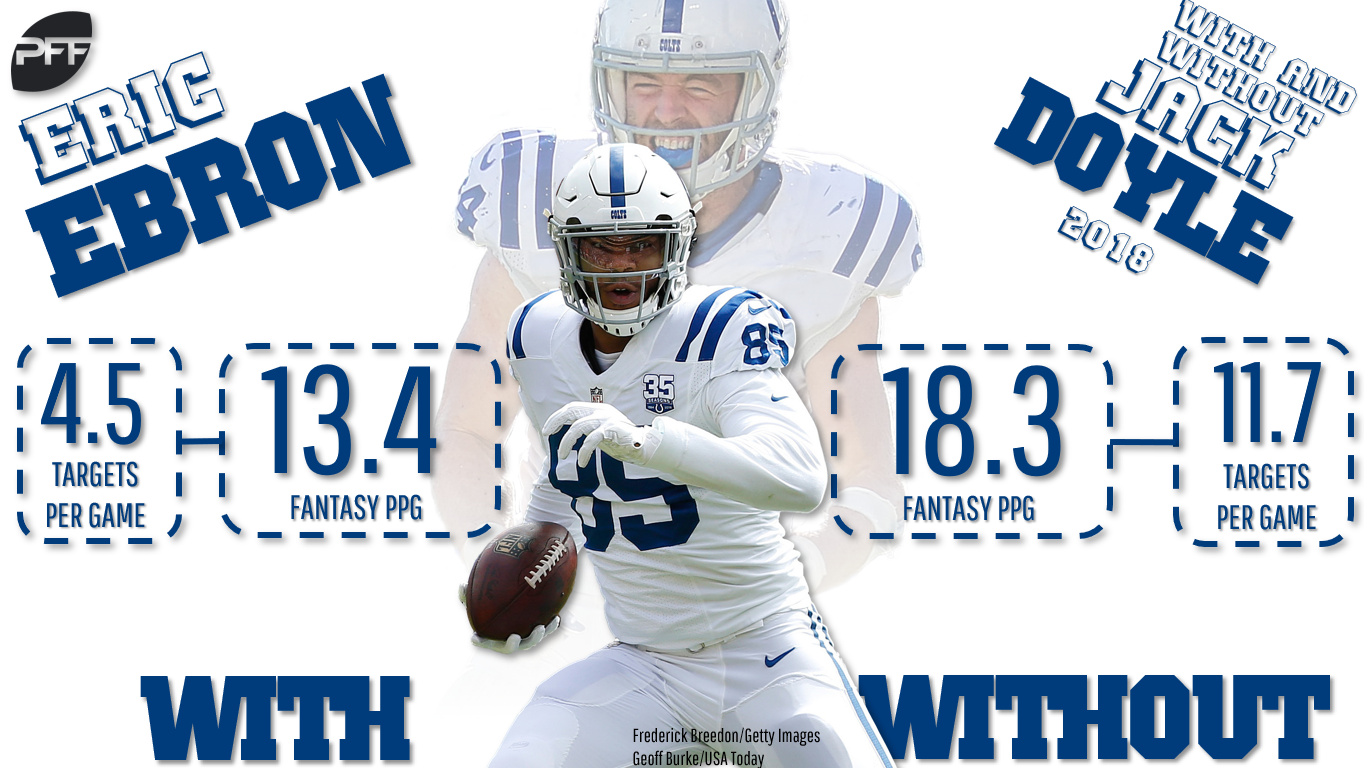 Eric Ebron, Jack Doyle (out, hip) — Ebron was thought to be at-risk for missing Week 6, But was reportedly on the field for practice Friday. Start him with confidence — he’s PPR TE3 on the season and should see continued heavy usage with Doyle still out.

Marshawn Lynch (questionable, hip) has been limited in practice all week but is expected to play. I don’t think there’s any way he misses a chance to play against Seattle. It’s possible Jalen Richard could see additional work if the team opts to limit Lynch’s touches.

Washington running backs Adrian Peterson and Chris Thompson were both injured in Week 5 against New Orleans but are both on track to play this weekend. The team also has a number of injuries at the wide receiver position, but Jamison Crowder (the only fantasy relevant party at the moment) is also on track to play.

(Sunday update: Thompson is not expected to play. Kapri Bibbs is your waiver wire bailout if you don’t have an option on your bench. Jamison Crowder is OUT. Maurice Harris — 3/47 against the Saints on Monday — is an interesting replacement option. Paul Richardson is questionable.)

Greg Olsen is expected to return in Week 6. If possible, I’d take a “prove it” approach here and sit him, but with the scarcity of fantasy tight ends available I understand your hand may feel forced. Olsen had just one game with more than 40 receiving yards last season.

The Bills don’t have any major fantasy injuries to track this week.

The Texans’ injury report is a bit scary, with every major fantasy contributor listed. However, Deshaun Watson, Lamar Miller, DeAndre Hopkins, Will Fuller, and Keke Coutee are all expected to suit up on Sunday.

There are no major fantasy players headed for game-time decision this week. Larry Fitzgerald has been limited in practice, however he’s also been a limited fantasy producer this season and you likely aren’t starting him anyway. Dalvin Cook is reportedly back to full strength — we may see his first true bell-cow usage of the season this week.

The Steelers have no significant injuries to monitor for fantasy this week. The Bengals will be without Giovani Bernard once more, meaning Joe Mixon should get the full workload. Tyler Kroft has not practiced this week, making C.J. Uzomah a very interesting streamer play. He caught two balls for 43 yards against Miami in week 5 and could do more damage with additional snap share. If Kroft is officially ruled out, Uzomah gets my green light.

(Sunday update: Kroft is officially OUT.)

The Bears have no significant injuries to monitor for fantasy this week. The Dolphins are banged up at wide receiver, with Danny Amendola, DeVante Parker, and Jakeem Grant all limited this week. Parker is “not really sure” of his availability for the game and has been a rumored trade candidate of late. Wilson should have a usable floor based on the condition of the rest of the group — he turned in a 5/43 in Week 5 in similar circumstances.

(Sunday update: Ryan Tannehill (shoulder) is OUT and Brock Osweiler will start in his place. The Bears defense should have their way with Miami. Need a silver lining? Maybe, just maybe, this is the set of circumstances that finally leads to increased usage for Kenyan Drake.)

Brandin Cooks and Cooper Kupp are both expected to play this week after suffering concussion in week five. This is great news for Rams fans and fantasy players — Kupp is PPR WR4 (!) this season while Cooks is WR21. Jared Goff will have his entire arsenal available. Greg Zuerlein is expected to miss another game, so fire up Cairo Santos if needed. The fill-in kicker made three of four extra point attempts and both field goal attempts in Week 5.

The Broncos have no significant injuries to monitor for fantasy this week. Courtland Sutton had been limited earlier but was listed as a full participant by Thursday.

It looks like both teams will be at full strength for this contest, fantasy-wise.

Leonard Fournette will be out again, and in case you missed it, Corey Grant’s season ended last week. T.J. Yeldon is now in a bell-cow spot — start him with confidence and view him as a RB2 until Fournette returns. Jamaal Charles was signed to address depth but shouldn’t be viewed as a fantasy option his week.

Josh Gordon remains limited in practice (hamstring) but should play, as he’s done since joining the Patriots. Sony Michel has also been limited, but was spotted riding the stationary bike, a good sign considering he’s dealing with a knee injury. Expect him to play and have him in your lineup. He’s scored in consecutive weeks and has established himself as a major contributor in the offense. Rob Gronkowski was also limited this week but is expected back on the field — you’re playing him. In case you haven’t heard, Chris Hogan’s role has all but been erased, but now he’s tending toward missing the game this week as he went from limited to DNP over the course of the week.

This week’s Monday contest is a fantasy player’s worst nightmare. There are a number of fantasy-viable  49ers who we may not have status updates on until after the Sunday slate is complete. This is your reminder to use Sunday players over Monday players when possible. It’s worth waiting for updates on your studs, but for flex-level players, don’t assume the risk.

The 49ers list of players who did not practice includes Matt Breida, Pierre Garcon, and Dante Pettis. If you had planned on using one of them, be sure to start them in your flex spot. Your safety valve for all of these players is Kyle Juszczyk, who had six receptions last week.

The Packers rested Aaron Rodgers due to his reaggravated knee injury, but he’s expected to play. Jimmy Graham was reportedly just getting a scheduled day of rest, so you can also count on him Monday night.