CHICAGO, IL - SEPTEMBER 10: Tarik Cohen #29 of the Chicago Bears eludes Brooks Reed #50 of the Atlanta Falcons during the season opening game at Soldier Field on September 10, 2017 in Chicago, Illinois. The Falcons defeated the Bears 23-17. (Photo by Jonathan Daniel/Getty Images)

Fantasy football waivers can often make or break your season. Making the right decision on which players to add is crucial, so we have you set up with a deep list of potential waiver wire adds for Week 4.

Jared Goff, LAR (25-50%) — The Rams offense is absolutely on fire right now, and yet Goff is still available in 31 percent of leagues entering this waiver run.

Kerryon Johnson, DET (25-50%) — The rookie continues to play well, finding the end zone in Week 4. Scoop Johnson up if you’re in one of the 22 percent of leagues where he's still a free agent.

Marcus Mariota, TEN (10-20%) — We can't fully place our trust in Mariota just yet, but he impressed in Week 4 with a 300-plus-yard performance and a big-time touchdown throw in overtime.

Baker Mayfield, CLV (5-8%) — It wasn't the biggest fantasy day for Mayfield in Week 4, but he put up solid numbers and his receivers dropped six passes.

Jameis Winston, TB (5-8%) — The Fitzmagic era appears to have ended just as suddenly as it started, and Winston will be the starter when the Bucs return from bye in Week 6.

Mitchell Trubisky, CHI (3-5%) — Last week's biggest breakout heads into his bye but should be stashed in regular-sized leagues. 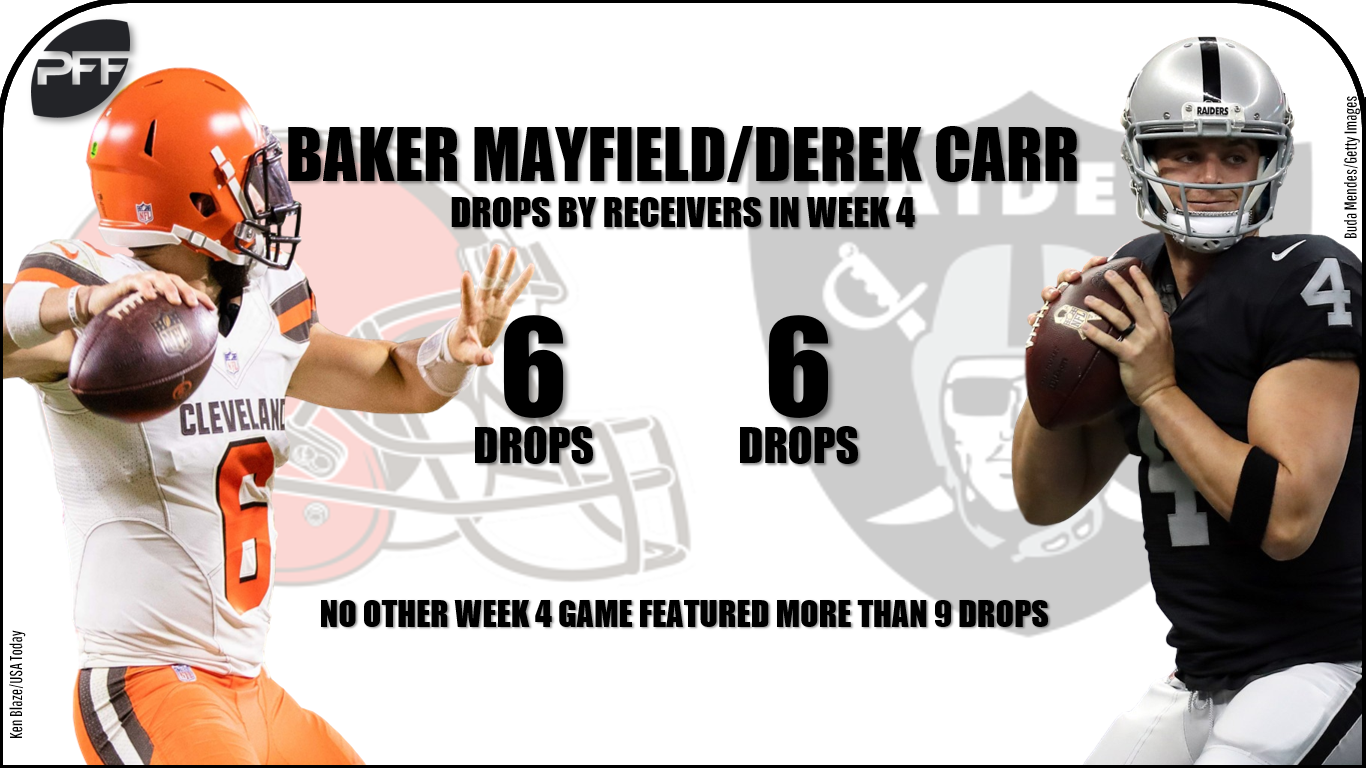 Nick Chubb, CLV (15-30%) — Chubb accomplished the remarkable feat of topping 100 yards on just three carries last week, and his runs were a thing of beauty. His role might not expand immediately, but it's inevitable that he Browns are going to give him more work.

Tarik Cohen, CHI (15-30%) — He's coming off a massive Week 4 stat line, but don't forget that it's a roller coaster ride with Cohen from week to week.

Nyheim Hines, IND (10-20%) — The Colts leaned heavily on Hines as a receiver out of the backfield last week and that should continue against the Pats Thursday night.

Aaron Jones, GB (10-20%) — Jones was much more impressive than Jamaal Williams in Week 4. While a committee will likely continue, Jones is the back to own in the Packers backfield.

Frank Gore, MIA (5-10%) — Miami seems to like Gore more than Kenyan Drake right now, and that puts Gore on the radar in regular-sized leagues.

Taylor Gabriel, CHI (7-15%) — Don't expect Gabriel to score twice every week, but he's locked in as the Bears' No. 2 receiver and should be on fantasy rosters.

Antonio Callaway, CLV (7-15%) — Callaway didn't have the biggest fantasy week, but he did lead the Browns in targets with nine.

Dede Westbrook, JAX (7-15%) — We finally good a big game from Westbrook. He's worth strong consideration after going up over 100 yards and seeing double-digit targets.

Taywan Taylor, TEN (5-10%) — With Rishard Matthews out of the mix, Taylor emerged as the clear No. 2 in Tennessee and caught seven balls in Week 4.

Mohamed Sanu, ATL (5-10%) — Sanu topped 100 yards for the first time since 2014. While he doesn't have major upside, Sanu's high weekly floor will help fantasy teams through the bye weeks.

Cameron Brate, TB (7-15%) — The Bucs head into bye this week, but Brate is worth a stash with O.J. Howard slated to miss time with a sprained MCL.

Joe Flacco, BAL (1-3%) — If you're looking for help in deeper leagues, Flacco is worth consideration. He's shown good chemistry with John Brown through the first four weeks of the season.

C.J. Beathard, SF (1%) — Beathard was actually pretty decent in his first start this season. He's worth rostering in 2QB formats.

Mike Davis, SEA (3-5%) — With Chris Carson banged up, Davis went out and had a big day in Week 4. He's still behind a healthy Carson, but Davis' upside is worth a bench stash.

Ito Smith, ATL (1%) — With Devonta Freeman sidelined, the Falcons have gotten Smith involved. The rookie is worth stashing even with Freeman likely to return this week.

Ryan Grant, IND (3-5%) — Grant didn't see heavy volume last week, but his upside is appealing with Hilton likely to be sidelined in Week 5.

Donte Moncrief, JAX (3-5%) — Though he's volatile from week to week, Moncrief showed that he still has fantasy upside with over 100 yards and a score in Week 4.

Marquez Valdes-Scantling, GB (1%) — With Randall Cobb banded up and Geronimo Allison in the concussion protocol, Valdez-Scantling could have a big role in Week 5.

C.J. Uzomah, CIN (3-5%) — With Tyler Eifert likely headed to injured reserve, Uzomah is the next man up at tight end for the Bengals.

Ricky Seals-Jones, ARZ (3-5%) — Tight end is brutal this season, but Seals-Jones could help out desperate fantasy players. He should continue to benefit from Josh Rosen under center.

Geoff Swaim, DAL (1%) — Swaim saw two end-zone targets and converted one for a score in Week 4. He's worth a look in deep leagues given the lack of quality fantasy tight ends this season.

Tennessee Titans, TEN (1%) — Tennessee is this week's top streamer option after the Bills allowed a massive seven sacks and three takeaways to the Packers in Week 4.

Denver Broncos, DEN (1%) — Denver likely put up negative fantasy points in your league last week, but they're worth strong consideration against at Jets offense that has allowed double-digit fantasy points to each of the last three defenses they've faced.

Carolina Panthers, CAR (1%) — Only three teams have surrendered more fantasy points to opposing defenses than the Giants this year. Better yet, the Panthers are available in 71 percent of leagues.