Below, we’ll be taking an in-depth look at the tight end position through the lens of this metric and analyzing what this means for the 2019 fantasy season.

2018 was an interesting year for tight ends. Among all tight ends this past decade, Zach Ertz ranked second and Travis Kelce third in total expected fantasy points. However, on the whole, this was a down year for tight ends. In 2018, tight ends combined for just 5,697.5 expected fantasy points, which was their lowest total output over the past eight seasons. We discussed what the lack of parity at the position means for your 2019 fantasy drafts earlier this offseason.

See below for a list of the wide receivers who ranked top-22 in expected fantasy points per game followed by an in-depth look at some of the highlights. 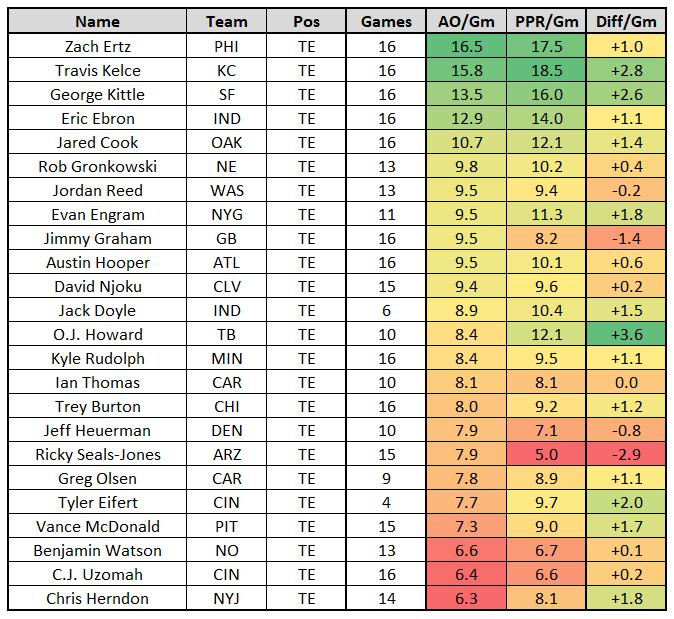 More: How should we value Ertz with Dallas Goedert around?

Ertz averaged 16.5 expected fantasy points per game in 2018, which led the position and ranks second-best this past decade – behind only Jimmy Graham‘s 2011 season and not by much (16.7). In terms of expected fantasy point market share (22%), his 2018 season ranks best over the past 10 seasons. He’s ranked first, fourth, and third in expected fantasy points per game over the last three seasons, leading the position. Although Ertz saw better volume than Kelce last season and was almost just as good in terms of production (recording the sixth-most fantasy points by any tight end all-time), he’s being drafted 10 spots after Kelce by current ADP. This is likely due to the team’s decision to acquire DeSean Jackson as well as buzz regarding sophomore tight end Dallas Goedert. Ertz will likely see a decrease in volume next year, but maybe not by much. Jackson has only eclipsed 100 targets once over his past seven seasons and Goedert’s ascension likely hurts Nelson Agholor (more 2TE sets, fewer 3WR sets) than anyone else.

In 2018, Kelce totaled the fourth-most fantasy points by any tight end all-time. In terms of expected fantasy points per game, he ranked fourth-best this past decade, while also ranking top-seven this past decade in air yards, deep targets, and expected touchdowns. As I argued elsewhere, with Tyreek Hill facing a potential suspension, Kelce is well worth a borderline first-round pick in 2018 drafts.

Kittle ranked third in expected fantasy points per game in 2018, while also recording the 14th-most fantasy points of any tight end all-time. In terms of expected fantasy point market share, he also ranked third, but also seventh-best of the past decade (21%). On top of good volume, Kittle was one of our most-efficient tight ends last season (+2.6), while also setting new PFF records in a number of other (non-fantasy) metrics I find particularly meaningful. San Francisco drafted two wide receivers on Day 2 of the 2019 NFL Draft, and Kittle hasn’t been quite as productive with Jimmy Garoppolo under center. Based on these two factors, it’s possible Kittle sees a dropoff in volume and production in 2019 but it’s also just as likely he sees an increase in volume because of how efficient and productive he was last year.

Though Ebron was decently efficient in 2018 (+1.1), Doyle has been the far more efficient tight end over the past two seasons, ranking ninth to Ebron’s 24th in total differential (between actual and expected fantasy points). While Ebron did see tremendous usage near the end zone, he was so efficient (scoring 4.9 touchdowns over his expectation, one of the 10 highest numbers by any tight end this past decade) that we should be expecting a significant regression in that department next season, not even including the likely decline in volume.

Last season, Cook ranked fifth at the position in expected fantasy points per game. Now, in New Orleans, it’s possible he may see even better volume next season. Over the past 11 seasons, the Saints have ranked top-five in tight end expected fantasy points seven times, along with nine seasons ranking in the top-half of the league. That said, their two worst seasons came in 2017 (ranking 32nd) and 2018 (ranking 19th). Still, we know Sean Payton likes to have his tight ends running routes (rather than pass-blocking) as often as possible, so this landing spot seems ripe with fantasy potential. Though I think volume will be good, I’m still not entirely sold on Cook as a talent. While this may be related to poor quarterback play, Cook’s expected fantasy numbers paint the picture of a below-average talent, as he sports a league-worst -57.5 fantasy point differential over his previous four seasons.

Cook’s volume last season might also be good news for Darren Waller. Waller is reportedly, one of the NFL’s “best-kept secrets,” and will be given “the chance of the lifetime” as Oakland’s TE1 this year. 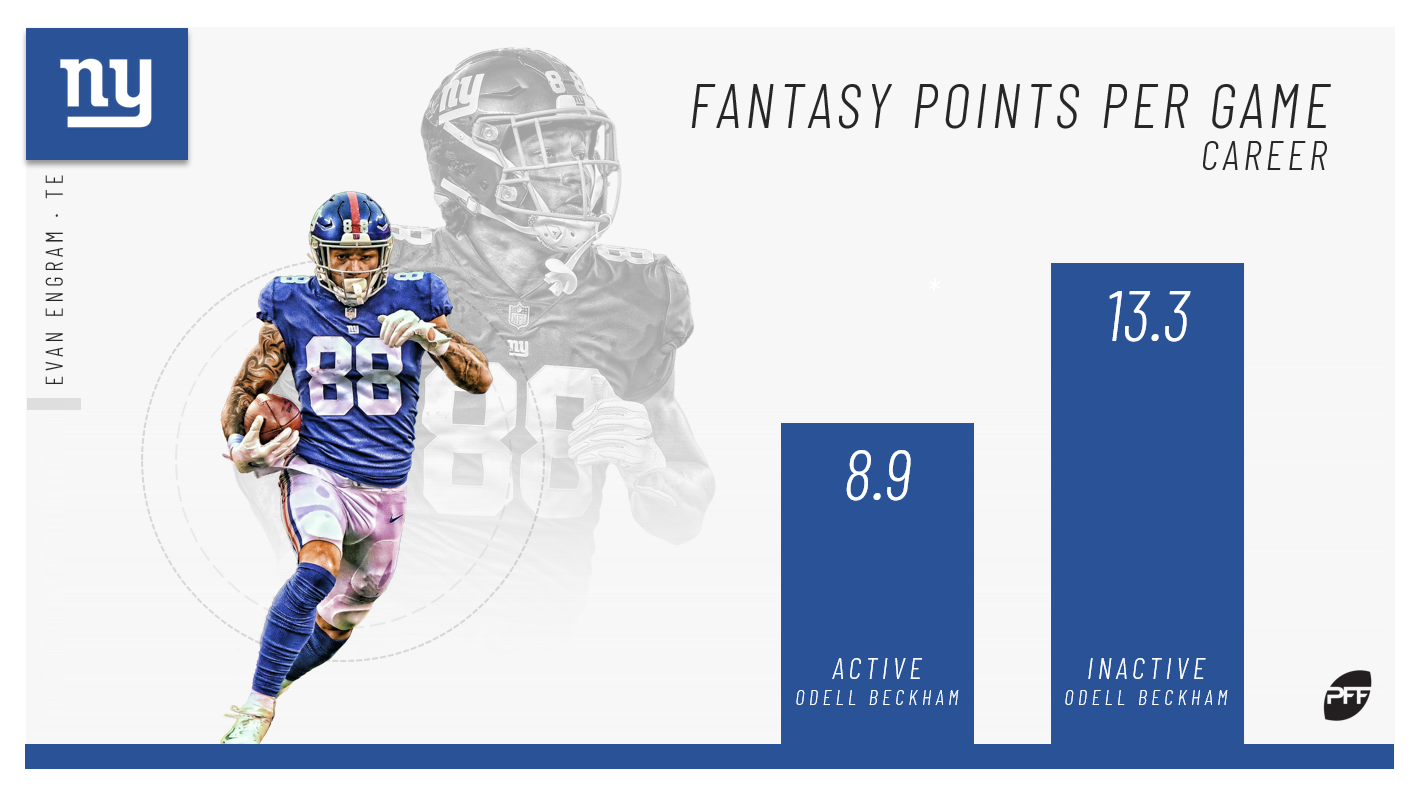 Last season, Howard would have ranked fifth-best in fantasy points per game, if not for injuries. While his production was strong, his volume wasn’t as good, but he made up for that with hyper-efficiency. Over the past decade, among all tight ends with at least 35 targets in a single season, Howard’s 2018 season ranks ninth (+3.6) and his 2017 season ranks 17th (+3.2) in differential per game. Over the past two seasons, he ranks first (+3.4), leading the next closest tight end (Kelce) by +1.0. Howard’s hyper-efficiency in this stat (as well as a few others we have discussed), paint the picture of a breakout waiting to happen. For this to happen, he’ll need new head coach and offensive play-caller Bruce Arians to adopt a different approach with the position. Over Arians’ last seven seasons, he’s never had a tight end reach even 7.5 expected fantasy points per game in a single season.

Henry sat out all of 2018 with an ACL injury, but like Howard, seems to be a breakout waiting to happen. In 2016-2017, Henry trailed only Rob Gronkowski in per game efficiency (+2.7). Henry was also our second-highest-graded tight end (as a receiver) over this span, while also ranking third in yards per target and yards per route run. With Antonio Gates now 39 years old, it’s unlikely he’ll eat into Henry’s volume as much as he did in 2017 (46% positional market share).

Like Henry, Walker appears to be another injury-related value. Prior to last season, Walker ranked fifth, seventh, first, and sixth in expected fantasy points per game. He also led Tennessee’s receivers in expected fantasy points per game in each of those seasons — and that sort of volume seems likely to return in 2019, with Walker’s former tight end coach (Arthur Smith) now calling the plays.

Greg Olsen is another potential injury-related value, though less attractive than Walker. Prior to his last two injury-plagued seasons, he ranked first, fifth, and third in expected fantasy points per game.

Last season, Seals-Jones scored 43.8 fantasy points below his expectation, which was the third-largest negative differential this past decade. He has history with new head coach Kliff Kingsbury, who coached him at Texas A&M, but the team also signed TE Charles Clay earlier this offseason. He’s someone I’m avoiding this year.

Like Seals-Jones, Graham was woefully efficient last season (-1.4) and has been our least efficient tight end over the past two seasons. Last season, Graham totaled 3.6 touchdowns below his expectation, which ranks sixth-worst this past decade. Typically, that should mean Graham is due for a positive regression in 2019, and he did see good volume last year (ninth-best), but it’s hard to gauge whether Graham is a legitimate injury discount or if he’s already fallen off of the age cliff.