SAN DIEGO, CA - JANUARY 01: Travis Kelce #87 of the Kansas City Chiefs runs through the defense of Kyle Emanuel #51 of the San Diego Chargers during the first half of a game at Qualcomm Stadium on January 1, 2017 in San Diego, California. (Photo by Sean M. Haffey/Getty Images)

Our projections have been updated to account for Tyreek Hill’s likely suspension, but that hasn’t yet impacted Kelce’s ADP. In early March, before the news on Hill broke, Kelce had an ADP of 2.05 (17th overall), and I had him 13th in my rankings. Today, he has an ADP of 2.04 (16th overall), and he’s been bumped up to No. 10-overall in my rankings, ahead of all wide receivers. 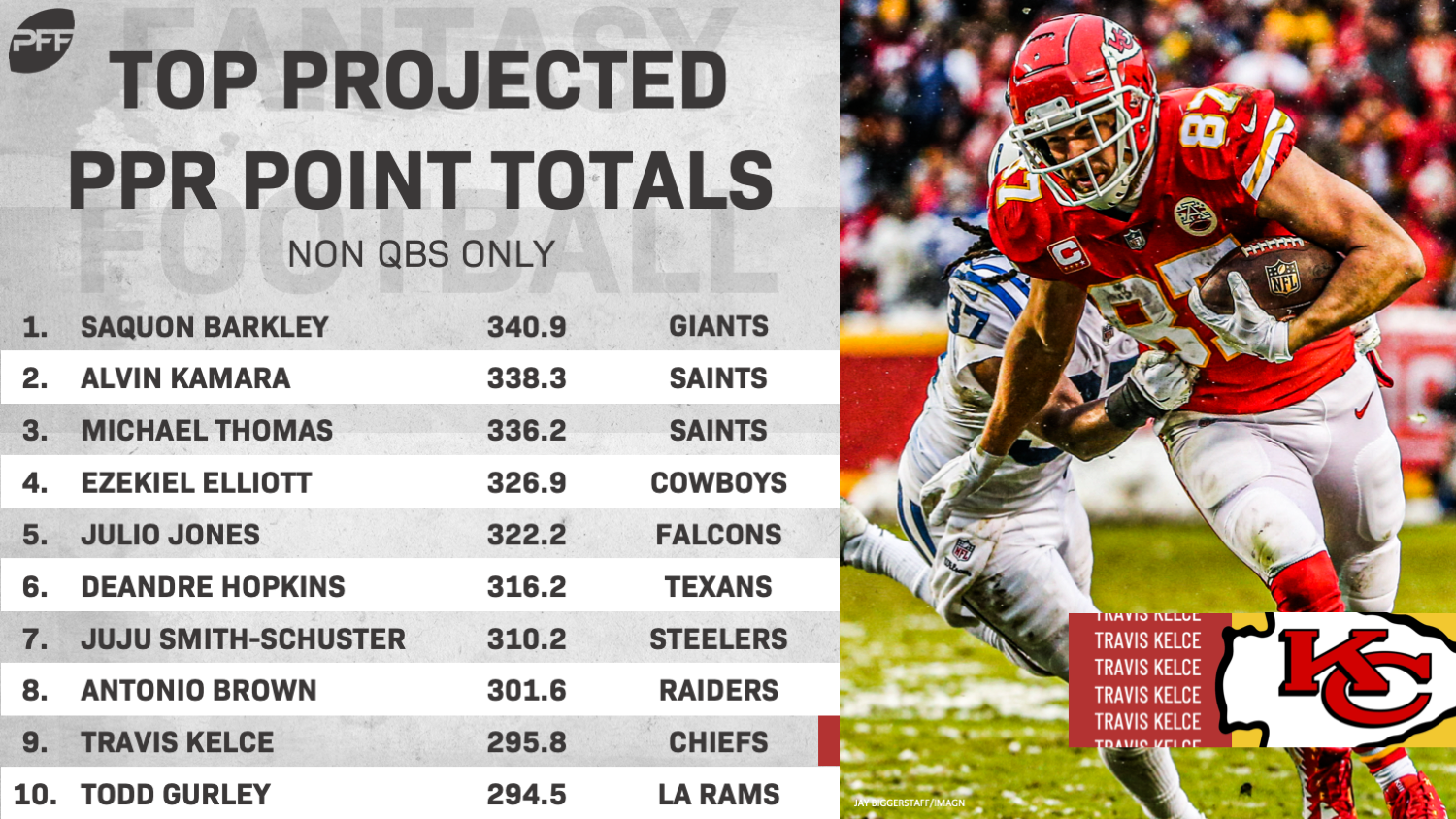 Kelce is now deserving of a first-round fantasy pick for two specific reasons:

Let’s start with the first premise:

Kelce has led all tight ends in fantasy points in three consecutive seasons. In 2018, he totaled 294.6 fantasy points, the fourth-most by any tight end in any season all-time. It’s no coincidence the best season of his career came last year, catching passes from Patrick Mahomes rather than Alex Smith.

Last year, in his first full season as a starter, Mahomes totaled 5,097 passing yards (the eighth-most by any quarterback in any season all-time) and 50 passing touchdowns (second-most). Over the previous four seasons, Smith averaged just 3,574 passing yards and 19.8 passing touchdowns per year. Mahomes also ranked second among all quarterbacks in PFF grade last year at 92.9, well above Smith’s best season (82.1 in 2017).

Now, along with good efficiency, Kelce should also see the best volume of his career, with Hill likely vacating 137 targets to some combination of Demarcus Robinson and Mecole Hardman.

Kelce hasn’t only been terrific for fantasy, but he’s also been one of the league’s most efficient tight ends by our grades (ranking top-three in each of the past three seasons) and a number of other important metrics. Over the past decade, Kelce holds three of our top-12 seasons by missed tackles forced and four of our top-eight seasons by yards after the catch. No other tight end made either top-12 list more than twice.

Kelce’s 294.6 fantasy points scored in 2018 ranked first among all tight ends and would have ranked ninth among all wide receivers. When compared to all other tight ends, his value was even more noteworthy.

Value-based drafting is not without its flaws, but it’s also really the only way to measure the value of a fantasy asset across positions. This is typically done by comparing the value gained by a specific player in comparison to your league’s average starter or worst possible starter. In this case, with the tight end position, we should be looking at Kelce in comparison to the No. 6 (Austin Hooper) or No. 12 (Jimmy Graham) highest-scoring tight ends from a season ago.

In our projections, this year, he outscores the tight end ranking fifth (Evan Engram) by 120.6 fantasy points, which is greater than the differential between the No. 1 wide receiver (Michael Thomas) and the No. 20 (Tyler Lockett).

That’s a massive edge to have on your opponents who waited until the later rounds to draft their tight ends. In fact, it’s enough of an edge to take Kelce in the late first round of 2019 fantasy drafts.