Despite being selected as the third tight end in the 2017 draft, our data suggests he might have been the best tight end prospect to come out over the past five years. Here’s the argument:

Since 2014, there are 127 instances of a tight end drawing at least 50 targets within a single season. Of these, Goedert’s 2017 season ranks:

His yards-per-target average becomes all the more impressive when factoring in a lowly 9.9-yard average depth of target, and his passer rating when targeted seems absurd within the context of South Dakota State averaging a passer rating of only 86.1 when targeting anyone else. He also ranked top-10 in run-blocking grade that year.

Goedert stood out again in his rookie year, ranking:

While I’m confident Goedert’s breakout is coming — that he’ll one day become a fantasy superstar — I don’t think it will be coming this year (barring an injury to Ertz). He has legitimate upside as a handcuff to Ertz, and might be worth a late-round pick in best ball leagues, particularly deep leagues, or leagues that boost scoring for tight ends, but he’s someone I’m avoiding in more traditional formats at ADP (Round 14). It’s just hard to imagine he’ll be able to post starter-worthy numbers (top-12 at the position). 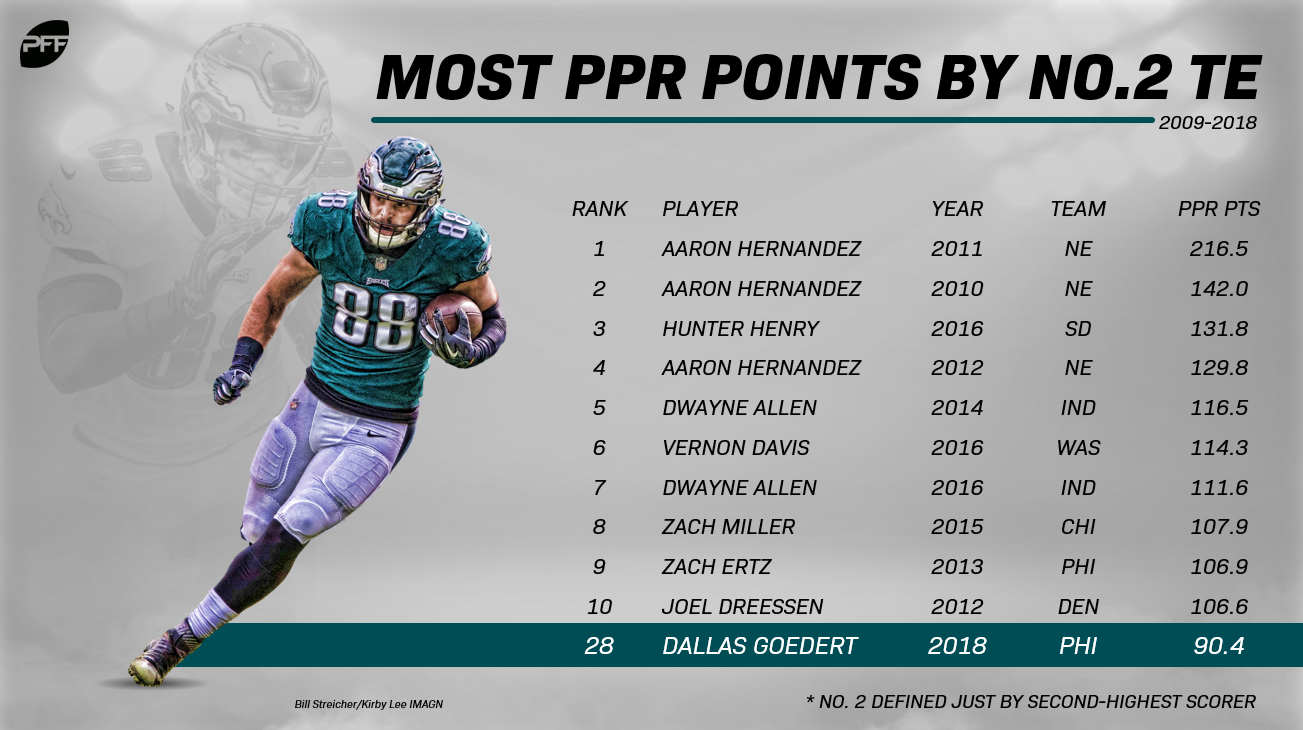 Goedert has been one of the most buzzed-about players this offseason. In May, Eagles beat writer Zach Rosenblatt called Goedert “the star” of Philadelphia's OTAs. Several weeks later, Eagles TE coach Justin Peele said Goedert's development was “phenomenal.” Several days after that, Jeff McLane reported Goedert looked “capable of making a second-year leap into stardom.” All of this comes following Philadelphia’s OC Mike Groh referring to both Ertz and Goedert as starters, likely implying the team will run 2TE sets (12 personnel) on the majority of their offensive plays.

Even so, I have a hard time imagining there’s much room for both tight ends to be fantasy-relevant. Last season Goedert totaled 523 snaps (48% of his team’s snaps), the second-most by any TE2 (behind Jesse James by 39 snaps). Even if Philadelphia uses its tight ends similarly to New England in 2011 (a historical outlier), when Hernandez posted a 75% snap share behind Gronkowski, that would only bump Goedert by about 45.2 fantasy points (using his 2018 totals), and would have pushed him up to 135.6 fantasy points – or what would amount to TE15 numbers (historically, over the past 10 seasons).

Goedert is a phenomenal pass-catcher and is likely to see an increase in snaps next season, but those snaps might not be especially valuable. Many of these snaps might come as a run-blocker, where Goedert excels and Ertz has struggled. Or they might come as a pass-blocker, which would only help Ertz's fantasy upside – he was asked to block on 8.4% of his passing snaps last season.

This brings me to my next point: Contrary to public sentiment, I don’t see Goedert’s ascension as being detrimental to Ertz’s fantasy stock. More 2TE sets means fewer 3WR sets, taking snaps away from Philadelphia’s WR3 rather than from Ertz. (I’m assuming that player will be Nelson Agholor, who ranks worst in yards per route run over the past three seasons.) It should also allow the team to create more favorable matchups for Ertz.

Indeed, last season Ertz averaged 1.85 fantasy points per target when the team ran 12 personnel, but only 1.67 fantasy points per target the rest of the time. The more time Goedert saw on the field, the better Ertz’s volume was too. Including the postseason, Goedert played on over 50% of the team's snaps nine times. Across that span, Ertz averaged 9.3 targets per game. In Ertz’s nine other games, he again averaged exactly 9.3 targets per game. And, his target share was even better when Goedert was on the field for the majority of the game (26% vs. 24%).

Yes, Ertz is probably due for a regression. His 2018 season was ridiculously good, and it would be hard for any player to have a repeat performance. The Eagles have significantly upgraded their starting receiving corps — swapping out Nelson Agholor and Jordan Matthews/Golden Tate for DeSean Jackson and Goedert. With better talent surrounding him, it’s less likely he’ll be targeted as often as he was in 2018. Still, I don’t see the drop-off as being as bad as current ADP has implied (mid-third round). Agholor, Matthews, and Tate totaled 169 targets last year, which is about the same as Jackson’s typical volume combined with a near-doubling of Goedert’s target total from last year. Given Ertz’s massive positional advantage, he’s still a player you should be going out of your way to target.