Heading into Week 6, as we do each week in this space, we’ll be looking at some of my top DFS tournament plays of the week. We’ll be naming one player at each position and on each site for the main slate.

(Looking for a more contrarian approach to your DFS lineups this week? Check out Scott Barrett's Fades & Contrarian Plays.)

Winston was a lot better last year than you may remember. Across the 11 games he played on at least 50% of Tampa Bay’s snaps, he averaged 19.9 fantasy points per game and 306.9 passing yards per game. Those numbers ranked fourth and first, respectively, among all quarterbacks to play in as many games. This preseason, Winston ranked as our highest-graded quarterback. During the first three games Winston was suspended, his backup — career journeyman Ryan Fitzpatrick — totaled 101.4 fantasy points, or the fourth-most by any quarterback in any three-week stretch ever. This week, Winston returns off the bye to face an Atlanta Falcons team missing five key players on defense and ranking seventh-worst in opposing passer rating, fourth-worst in pressures forced per dropback, fourth-worst in fantasy points surrendered per dropback, and last in points allowed per drive.

Yeldon is a tremendous play this week, for all of the reasons we outlined in our Actual Opportunity column:

Based almost entirely on volume and a lack of competition for backfield snaps, he’s a top value on the slate, despite what’s at-best a neutral matchup even with Sean Lee out.

Despite (as we all know) poor volume and efficiency near the end zone, Jones’ volume has still been pretty good overall. Among wide receivers he ranks seventh in expected fantasy points per game, fifth in targets per game, second in air yards per game, and second in deep targets per game. He’s coming off a disappointing outing last week, in shadow coverage against Joe Haden, to face the best possible matchup. Tampa Bay ranks dead-last in schedule-adjusted fantasy points per game to opposing WR1s. As Graham Barfield noted here, Tampa Bay’s perimeter cornerbacks have been atrocious on a per-target basis, and that’s where Jones runs 79% of his routes. That matchup might get even softer this week with Carlton Davis questionable.

Since 2014, Jones averages 26.2 fantasy points per game across eight games against Tampa Bay, or 34.7 fantasy points per game when home and against Tampa Bay. Since 2014, 30% of his receiving touchdowns have come against Tampa Bay. After “only” seeing nine targets last week, head coach Dan Quinn apologized after the game, saying, “(We) just have to make sure (Jones) gets as many touches as we can in the game. He’s one of our best and most explosive players so every game, we want him involved.” I suspect he’ll rectify that error big-time in Week 6, and luckily for us, it’s perfect timing. For whatever reason, DraftKings priced him at about $1,200 cheaper than where I would have had him.

In Week 5, Hooper set a new career-high in targets with 12, catching nine for 77 yards. This was well out of line from his typical usage, but it is encouraging. With the second-highest implied total of the week (30.5) and Tampa Bay ranking third-worst in schedule adjusted fantasy points per game to opposing tight ends, he’s a strong value.

Ryan struggled in Weeks 1 and 5 when he was on the road but played much better at home in Weeks 2 through 4. How much better? Well, he totaled 100.1 fantasy points, or the fifth-most by any quarterback through any three-week stretch ever. He’s at home this week in the dome, and will be facing off against a banged up Tampa Bay secondary on pace to set all-decade highs in opposing passer rating, passing yards per game, and passing touchdowns per game.

Gurley has scored at least 20 fantasy points in each of his last nine games and averages a whopping 31.4 fantasy points per game over this stretch. Since Week 1 of 2017, he leads all players in percentage of his team’s total yards (32.7 percent) and in percentage of his team’s total offensive touchdowns (43.8 percent). These numbers are all backed up by the usage stats as well – carries, targets, snaps, expected fantasy points, opportunities inside the 5-, 10-, and 20-yard lines, and then all of those numbers on a market share basis as well.

It’s hard to describe just how valuable Gurley is. No other player is a bigger part of their team’s offense than Gurley, and Gurley just so happens to be playing on the best offense in football. He gets a fairly soft matchup this week against a Denver defense ranking second-worst in yards per carry allowed (5.55) and rushing fantasy points per game allowed (19.4). I won’t be making a FanDuel lineup without him this week. 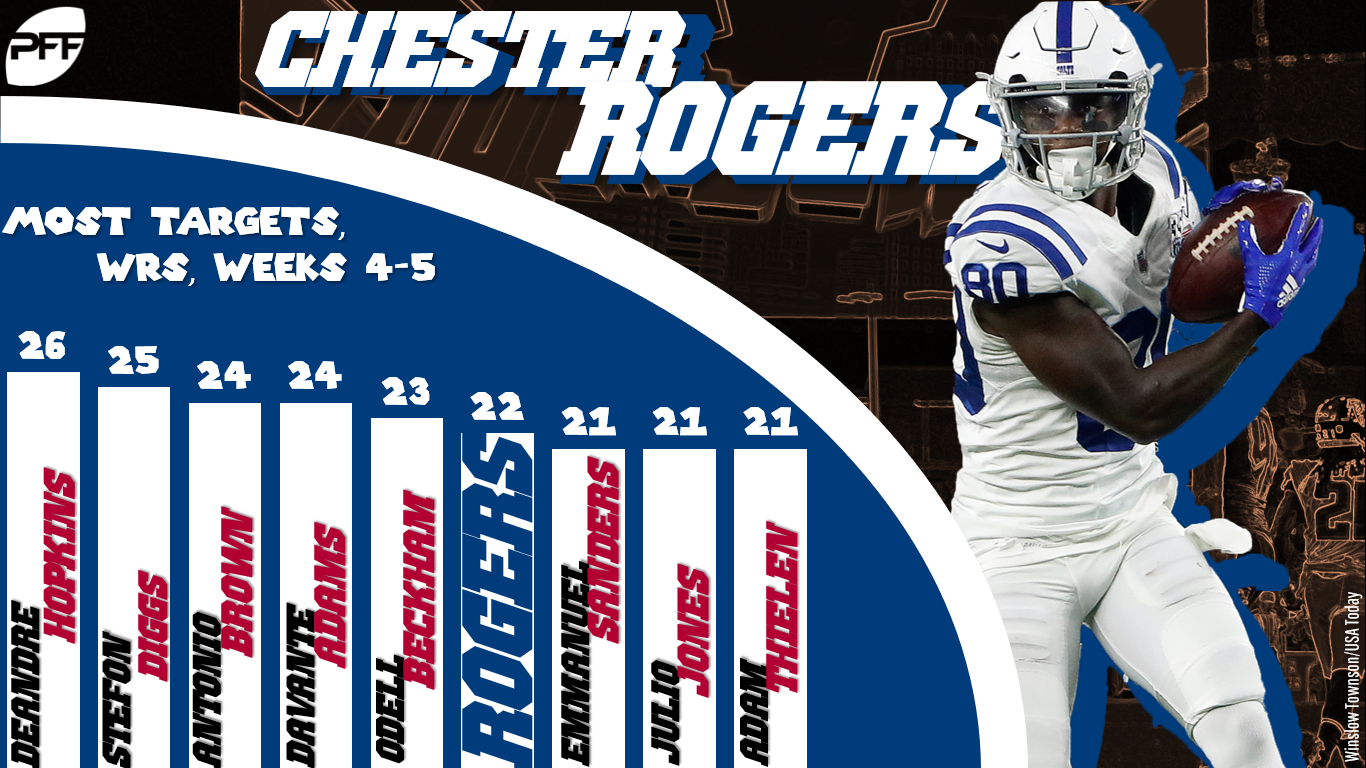 Over the past two weeks, with T.Y. Hilton and Jack Doyle out of the lineup, Rogers has averaged 18.0 expected fantasy points per game. That ranks 10th-most among all wide receivers over this span. He’s run 94% of his routes from the slot and draws a Jets defense giving up the second-most fantasy points per game to opposing slot wide receivers, but the eighth-fewest to outside wide receivers. He’s my top value play at the position on FanDuel this week, though there are quite a few names to like.

For all of the reasons outlined in my start/sit column, Brate is also a terrific tournament option this week. Throughout his career, Jameis Winston averages a 120.7 passer rating when targeting tight ends. That ranks second-best (behind only Tom Brady) among all active quarterbacks. When targeting slot or outside wide receivers, he ranks bottom-five. Ryan Fitzpatrick, meanwhile, has almost the reverse splits. 41% of Winston’s career touchdowns have gone to tight ends (most by any quarterback this past decade), while the average rate around the league is about 26%. Since Week 1 of last season, Brate averages 10.7 fantasy points per game in games Winston played. That would rank eighth-best this season. Now, with O.J. Howard likely out of the picture, Brate is a must-play pairing with Winston. (Though, if Howard is active, I might be pivoting elsewhere.)