Now that the NFL Draft is finally over, we’ve had the chance to assess the landing spots for rookies and gauge the success they’re likely to have. Everyone has their opinion on how the draft affects the value of the rookies chosen and the veterans currently on those teams, but the ultimate signal is that of the market. Luckily, we have thousands of best-ball draft selections to dig through from the offseason, and we can specifically compare players’ average draft position (ADP) before and after the NFL draft.

In this analysis, I’m going to look at the biggest veteran and rookie ADP movements for running backs from the period of one week before the draft to the week after. When we look closely at how the ADPs have progressed over the offseason, we can get a better idea of where they may head in the future — and whether certain players are fundamentally overvalued or undervalued.

All the data in the plots and tables below are from FFPC best-ball drafts, which are 12-team, PPR format leagues. The data points represent the daily averages for the selection of players among a 330-pick draft.

Most of the focus of draft season is on the rookies and their landing spots. While that is supremely important, it’s equally important to gauge the effects of the picks on the veterans in the league. Experienced running backs can be hurt from the addition of a highly drafted rookie or helped by the lack of talent added in the early rounds. 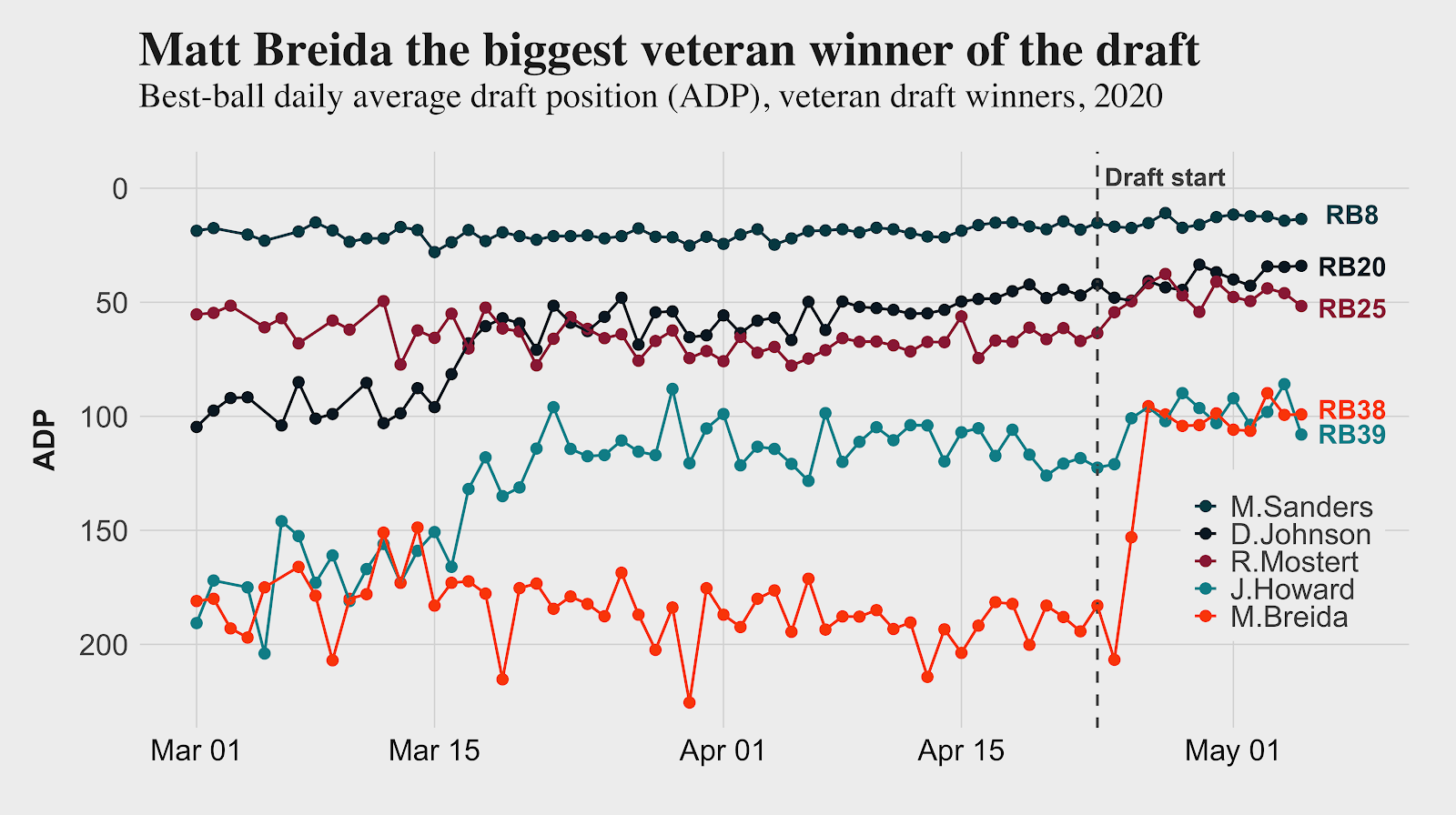 A lot of the changes at the top of the plot don’t look significant, but as you’ll see in the table below, small ADP movement at the top of drafts are very significant. Miles Sanders moved only from an ADP of 17.0 to 13.4, but that’s a 23.7% change. Sanders and David Johnson both benefited from no real competition being added to their rosters during the draft, solidifying their roles.

The biggest veteran winner of the draft, by far, was Matt Breida. His winning status from a trade to the Miami Dolphins coincided with the draft, and his new teammate Jordan Howard still benefits as the Dolphins only used one seventh-round pick on a running back. 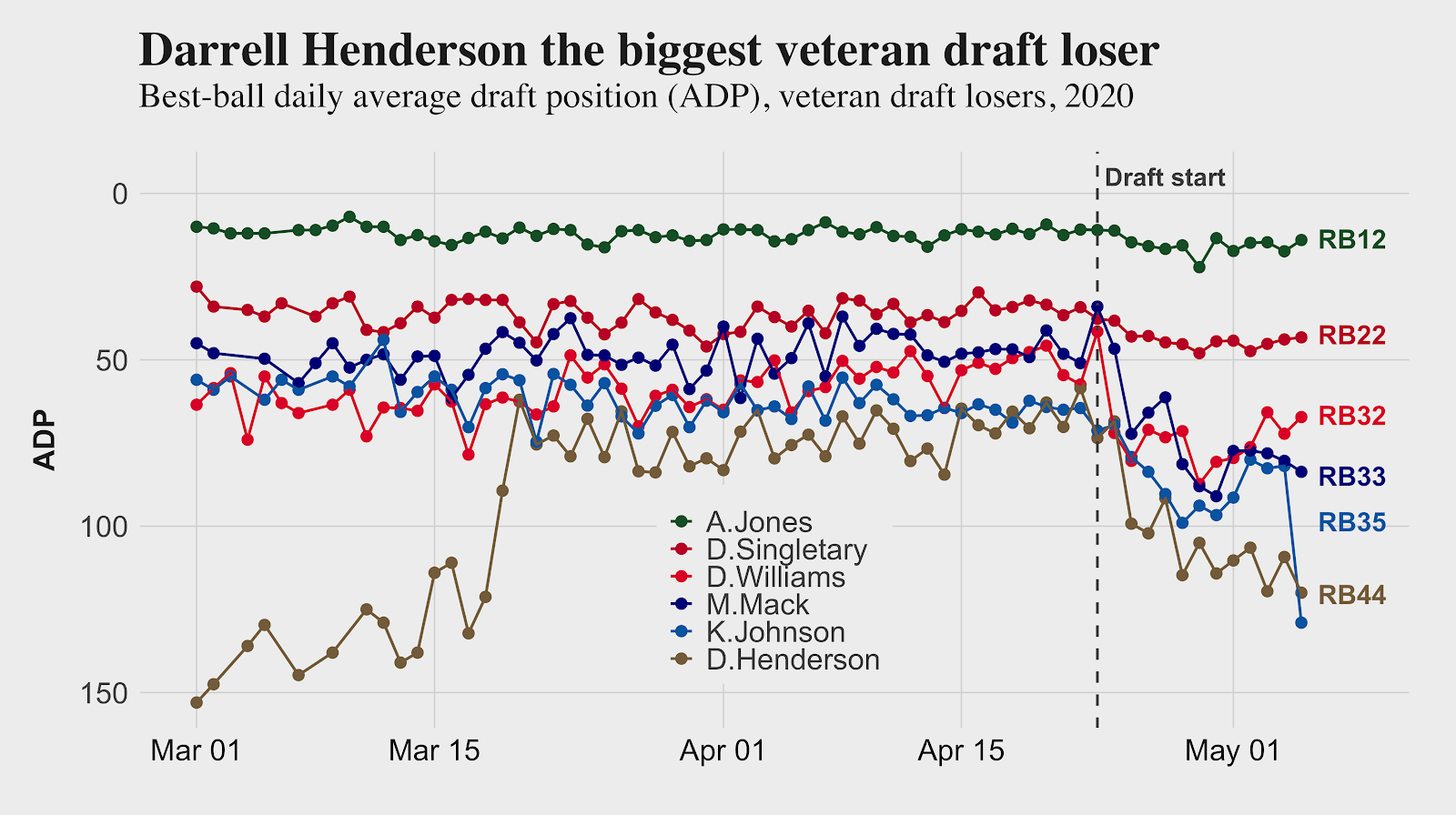 Again, the ADP movements at the top of the draft don’t look significant for Aaron Jones or Devin Singletary, but percentage falls of 30.9% and 27.1%, respectively, are significant. Darrell Henderson was the biggest loser of the NFL draft after the Los Angeles Rams selected Cam Akers in the second round, adding to uncertainty about Henderson’s usage this season. It’s been a turbulent offseason for Henderson, who took a round-trip from the beginning of March to now, initially rising on the release of Todd Gurley. 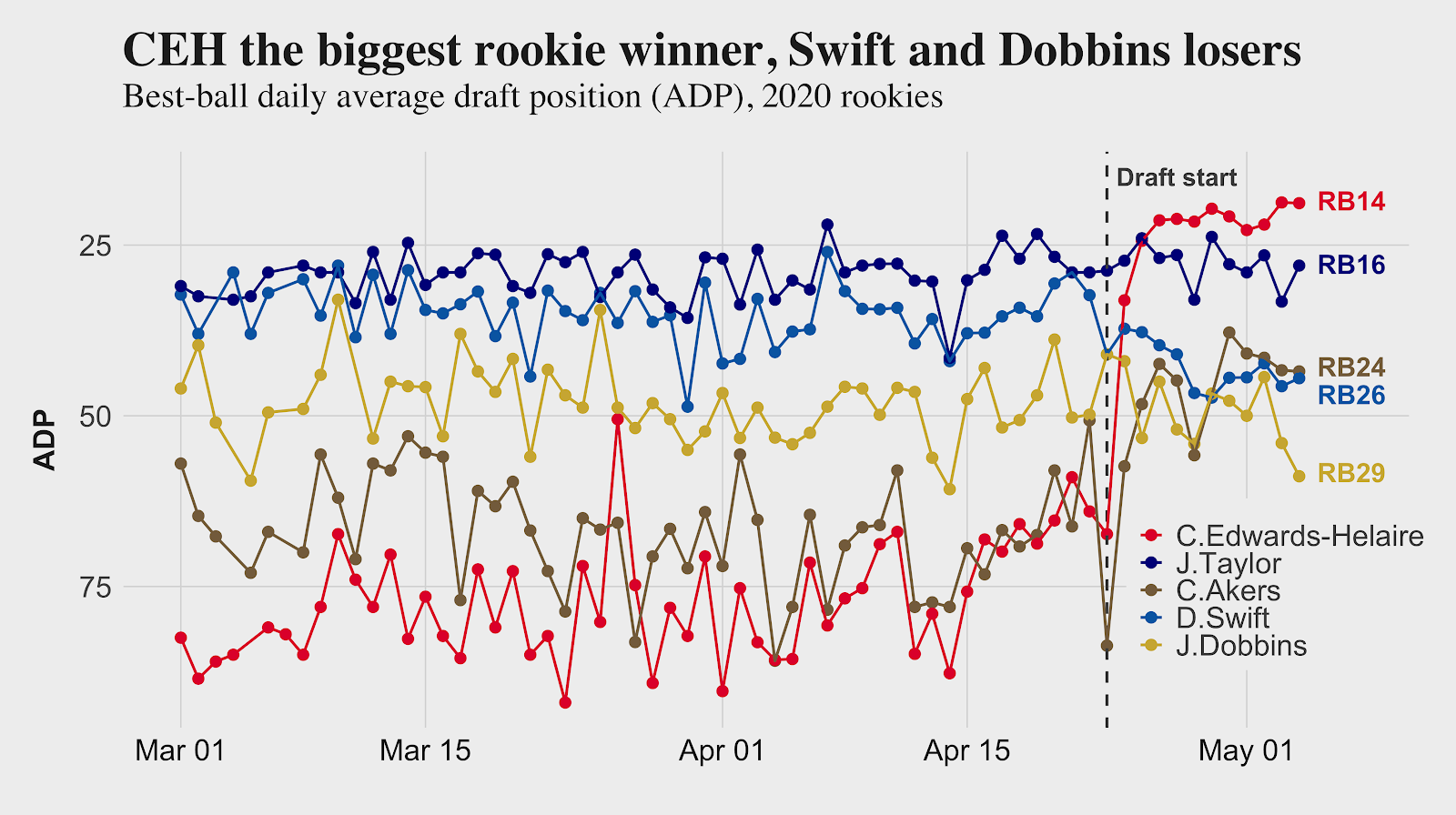 Clyde Edwards-Helaire was the first running back selected and landed on one of the most favorable teams in football. Running back will probably be one of the positions least affected by a shortened offseason, but it adds uncertainty to whether Edwards-Helaire will step into a strong role implied by his RB14 ADP. Cam Akers was also a winner going in the second round to an uncertain Rams’ backfield.

D’Andre Swift was the biggest faller for rookie running backs, even though his NFL draft position was solid at the 35th overall pick. The Detroit Lions’ backfield could prove more fruitful than current drafters suspect.