The preseason has officially come to an end and Week 1 is near. Before we get started on the opening week of 2018 fantasy football action, we’re taking one quick run through all of the divisions with some last-minute fantasy quick hits.

We’ll offer up a fantasy value, bust, and sleeper along with some rookies to know and dynasty quick takes for each team. In this edition, we examine the NFC West. 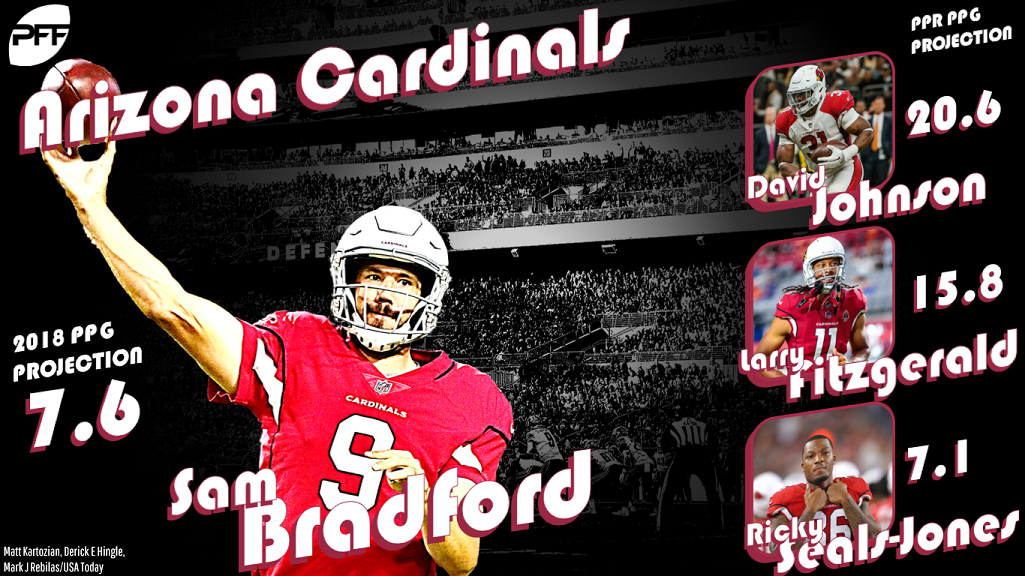 A team in transition, the Cardinals have a new head coach, a new starting quarterback, and a remade wide receiver group that makes this team somewhat of a question mark for fantasy purposes beyond familiar studs David Johnson and Larry Fitzgerald.

Best fantasy value: Larry Fitzgerald, WR — Fitzgerald had an ADP in the fourth round this season, which is earlier than we’d seen in recent years. However, it’s still a discount relative to a handful of wide receivers being drafted earlier who don’t project for as much work. The future Hall-of-Famer has ranked in the top-12 in targets and top-five in receptions in each of the past three seasons.

Fantasy bust: Sam Bradford, QB — It’s hard to call the journeyman a bust when he’s being drafted so late, but this looks like a team destined hand the keys over to first-round rookie Josh Rosen at some point this season. He’s a streamer at best this season.

Sleeper to watch: Ricky Seals-Jones, TE — The converted wide receiver has been getting plenty of attention from dynasty owners this offseason as the team has a bunch of vacated targets to redistribute. New playcaller Mike McCoy has a well-documented history of featuring tight ends in his offenses and the 2017 rookie ranked first among tight ends in fantasy points per opportunity last season.

Rookie(s) to know: Christian Kirk, WR — Kirk is listed behind fellow youngster Chad Williams on the week one depth chart, but look for the rookie to get his fair share of action in three wide receiver sets and as a return specialist. He’s an intriguing end-of-bench stash and at minimum should be on your waiver wire watch list.

Best current player for their 2020 roster: David Johnson, RB — Entering the 2020 season, Johnson will be 28 and on the back nine of his prime, but thanks to his broad skillset he will remain fantasy relevant for several more seasons. He also has just 551 career touches so far in his career, so he may age better than a typical running back. 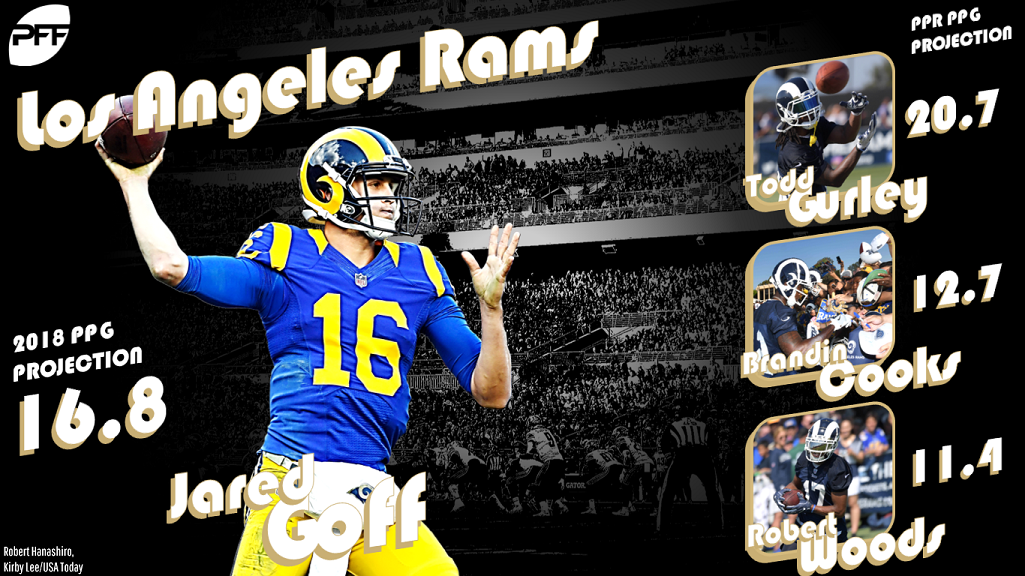 Led by rookie head coach Sean McVay, the Rams offense took the NFL by storm in 2017. An offense capable of supporting a large handful of fantasy producers thanks to so many plays run out of three wide receiver sets, there will be plenty of blue and gold on winning fantasy teams in 2018.

Best fantasy value: Jared Goff, QB — Goff ranked sixth in points per dropback in his sophomore season but just 18th in passing attempts. The team leaned heavily on the rushing attack last year, and while that doesn’t look to change this season, there is certainly room for increased passing volume if the team doesn’t blow as many teams out in 2018. The fantasy QB12 in 2017, Goff was drafted as QB15 this year.

Fantasy bust: Robert Woods, WR — Woods was PPR WR14 last year if you only look at the weeks in which he played. However, he’s missed at least two games in each of the past three seasons. The team also traded for Brandin Cooks (who’s been the subject of rave reviews from McVay all summer) and signed him to a huge extension this offseason. Bust is a strong word, but I don’t expect Woods to return value at his ADP of WR34.

Sleeper to watch: Cooper Kupp, WR — Kupp led the team in targets, red-zone targets, receiving yards, and receiving touchdowns as a rookie. He is being drafted as WR36 this year despite finishing as PPR WR25 in 2017.

Rookie(s) to know: John Kelly, RB — I don’t foresee any rookies making an impact for the Rams this season, but if anyone does, it will be Kelly. The sixth-round selection rushed for nearly 200 yards and three touchdowns this preseason. He did not pass Malcolm Brown on the depth chart, however.

Best current player for their 2020 roster: Todd Gurley, RB — The standout will be entering his age-26 season in 2020, which is notorious for some of the biggest fantasy outputs in NFL history. The team recently extended Gurley’s contract to keep him in Los Angeles through 2023. 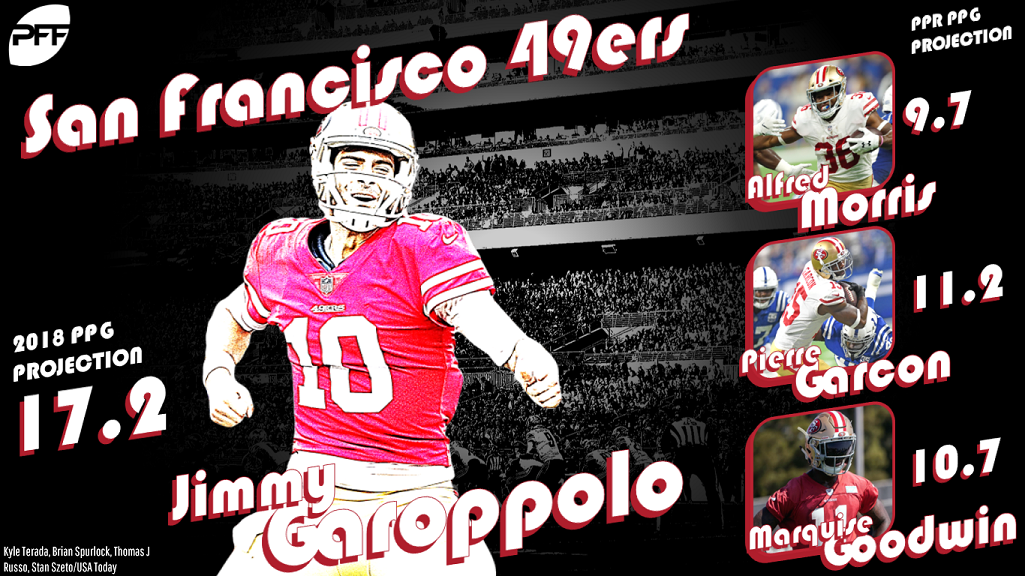 The 49ers have a slightly different aura about them entering 2018, thanks to the presence of Jimmy Garoppolo, who went 5-0 in his starts last season. Kyle Shanahan will have to figure out how to overcome the recent loss of their new feature back, Jerick McKinnon, but he’s managed to prop up offenses via a backfield committee approach in prior seasons.

Best fantasy value: Marquise Goodwin, WR — The wide receiver was PPR WR8 over the final five games of 2017, ranking ninth in targets and fifth in receptions over that span. He further solidified himself as Garoppolo’s preferred target this offseason, which means he’ll end up being a screaming value in fantasy at his ADP of WR29.

Fantasy bust: I’m not sure there’s a fantasy bust on the 49ers roster. I’m comfortable with all of the primary producers at each skill position at their ADP.

Sleeper to watch: Matt Breida, RB — The second-year back should see most of the receiving work previously scheduled for McKinnon. He kept pace with Carlos Hyde in fantasy points per opportunity last season on 126 touches. His ADP most of the summer was RB49, however he did see a late draft season spike following the injury to McKinnon.

Rookie(s) to know: Dante Pettis, WR — The team traded up to draft the former Washington standout and had him learn all three wide receiver positions in the offense.

Best current player for their 2020 roster: Jimmy Garoppolo, QB — The 49ers signed Garoppolo to a five-year, $137.5 million contract, signaling that they view him and Shanahan as the keys to the future. I expect many of the skill players in the offense to turn over between now and 2020, but “Jimmy G” will remain the constant. 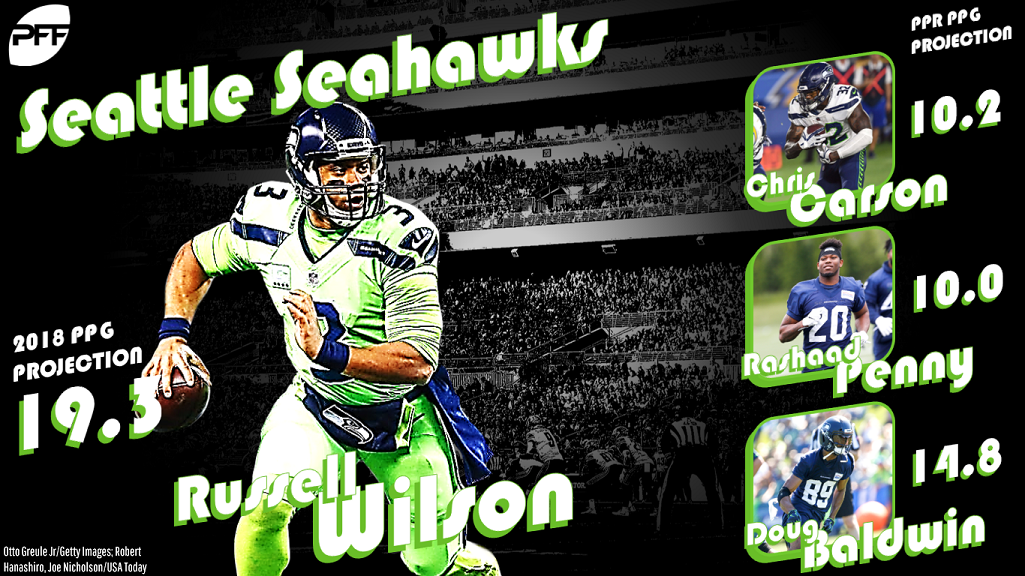 The Seahawks might project as one of the worst teams in the NFL if it weren’t for Russell Wilson serving as the lipstick on this pig of a squad. While the team in the midst of a major defensive overhaul, fantasy owners need not panic, because there is a tidal wave of positive fantasy gamescripts on the way for the passing attack.

Best fantasy value: Tyler Lockett, WR — A post-hype sleeper in his own right, Lockett could very well end up being the fantasy 1B to Doug Baldwin’s 1A due to the latter’s nagging knee injury. Essentially free in drafts this offseason (WR59), Lockett is going to provide some serious return on investment based on volume alone thanks to the exits of Paul Richardson and Jimmy Graham this offseason.

Fantasy bust: Chris Carson, RB — Carson was the subject of much praise from Pete Carroll this offseason, but I don’t like his ADP of RB34. He was PPR RB31 through four weeks last season, but that was without the presence of a first-round selection nipping at his heels. Mike Renner rates the Seahawks offensive line as the third-worst in the NFL, and Carson’s elusive rating trailed C.J. Prosise and Rashaad Penny in 2017.

Sleeper to watch: Brandon Marshall, WR — He might be cooked, but it also might not matter. The teams has a paper-thin receiving corps this season and Marshall’s differentiating size makes him a strong option for the red-zone receiving work vacated by Graham.

Rookie(s) to know: Rashaad Penny, RB — Penny was PFF’s second-rated running back prospect in the 2018 NFL Draft on the strength of his unmatched elusiveness and big-play ability. He had 30 runs of greater than 15 yards in 2017. His first-round pedigree ensures he’ll get his chances this season.

Best current player for their 2020 roster: Russell Wilson, QB – finishing as a top-three fantasy quarterback in three of the past four seasons, Wilson is still just 29.