Players with consistently high floors are underappreciated in fantasy football. They're the roster stalwarts who rarely put up dud weeks outside of injury-related reasons. And they often come at a discount compared to lower-floor/higher-ceiling guys.

To find the players who can be relied on week-in and week-out to produce fantasy points, I calculated players' 25th percentile — also called the first or lower quartile — in terms of fantasy scoring for each year over the last five years. For this research, I looked at players who played in at least six games and 100 offensive snaps. Fantasy scoring was full-point PPR and 6 points per passing TD. I then ranked them by their “floor” and created a model using position and that player’s prior-year first quartile to test for stickiness. 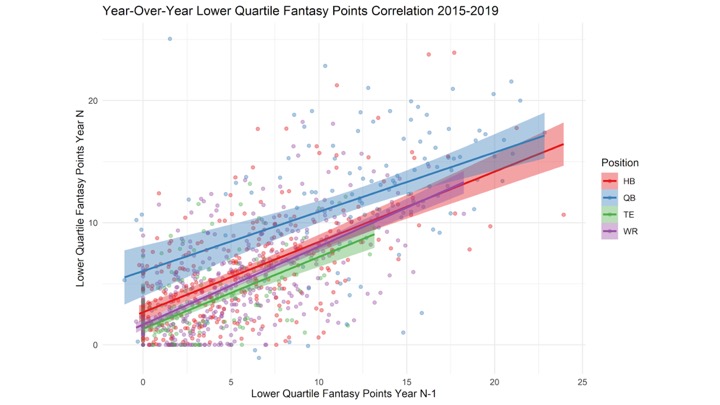 Using the regression model with position and lower quartile from year N-1, we get an R2 of .545 — meaning we can account for about 54.5% of the variance in the data.

What this means for fantasy is that we can find players whose floor rankings were greater than their positional ranking in fantasy points per game. That — combined with our consensus PFF Fantasy Rankings and  PFF’s 2020 fantasy projections — will allow us to target players who are both undervalued and reliable.

I really wanted to highlight Drake here because his 2019 season can be viewed through two different lenses.

He essentially had zero upside playing for the Dolphins, but his floor ranking was still in RB2 territory thanks to his consistent target rate — 5.5 targets per game. On the other hand, Drake actually outperformed his floor ranking after he was traded, though seven touchdowns over his final three games will do that.

In 2020, Drake will return to an ideal situation. The Cardinals have shown that they trust him to touch the ball 20-plus times with a balanced combination of rushes and receptions.

Only two of Golden Tate’s games netted less than double-digit fantasy points in 2019. His safety blanket play-style is great for Daniel Jones, who was shaky in his rookie season with the Giants. The box statistics might show a catch rate of 57.6%, but Tate hauled in 88.1% of his catchable targets and put up a team-best 1.57 yards per route run.

This coming season, the Giants' offense is virtually unchanged outside of adding offensive tackle Andrew Thomas with the fourth overall selection in the NFL Draft. Tate is currently being drafted as the 51st wide receiver — let him be a safe WR3 for your team while giving your upside players time to materialize.

Hunt joined the Browns’ offense after his eight-game suspension in 2019 and immediately became a big part of the offense, playing 55% of the offensive snaps his first week back and never failing to see less than 54% of snaps. The Browns have a new head coach this season in Kevin Stefanski, and he could be the offensive spark this team needs. Last season, the Minnesota Vikings used 21 personnel on 22.3% of their offensive plays, the second-highest rate in the league.

This offense has an opportunity for a pass-catching back — it catered very nicely to Dalvin Cook last season. Nick Chubb will still take a considerable amount of the early-down work, but that won’t stop Hunt from seeing 10-plus touches per game. Most of this volume will be in the form of targets, a valuable fantasy opportunity.

Last year, Goedert ended the season with seven-straight games of six or more targets — 12 and 10 in his final two games — and ranked 12th in fantasy points per game.

There's a lot of room for Goedert to build on what he started last year, considering that DeSean Jackson and Alshon Jeffery are both north of 30 years old and injury-riddled and rookie Jalen Reagor is reportedly learning the Jackson role. The Eagles were the top team in the league for 12 personnel at a whopping 49.8% of their offensive plays in 2019, and that is likely to continue for 2020.

In fantasy football, Allen is a fairly consistent performer thanks to his legs. Not counting his Week 17 exit for rest reasons, Allen scored more than 14 points in 13 of his 15 games — eight of which went for over 20 points.

Allen’s rushing forte and the addition of Stefon Diggs to the offense should maintain his fantasy floor for the 2020 season. Some cite his scrambling as an issue that may need to be fixed to be a successful NFL quarterback. This is a fair concern, but with Diggs stretching the field with his 15.6 aDOT, Allen will likely see more opportunities to run the ball.

Moore enjoyed a very solid breakout sophomore season for the Panthers with Kyle Allen under center for the majority of the year. Under these conditions, Moore posted 1.96 yards per route run and a PFF grade of 80.2 — both stable year-over-year metrics. Moore will look to improve in Year 3.

Carolina brought in Teddy Bridgewater as its new quarterback for 2020. One particular stat that jumps out for Bridgewater in 2019 was his adjusted completion percentage of 77.9% on passes that traveled 1-19 yards. This is notable because Moore had an aDOT of 11.7 in 2019. Moore also thrives in that intermediate range — he caught 94.6% of catchable balls and all four of his touchdowns from this range.

Bell has turned into one of the safest RB2s for fantasy purposes. In 2019, he was 17th in points per game but fifth in floor ranking.

Bell only scored less than 10 fantasy points in two games last season. On the other hand, only three of his games netted more than 20 points, and he never topped 23.2. Bell was not exciting by any means, but he provided safe points most weeks for fantasy squads.

Looking forward to 2020, the Jets made a first-round investment in ginormous offensive tackle Mekhi Becton in an attempt to fix a bottom-five offensive line from last season, which should benefit Bell greatly.

How is Jarvis Landry perennially disrespected in fantasy drafts? Here are his last four season ranks in points per game: 22, 28, 7, 15. And here are his floor ranks for those same seasons: 12, 23, 6, 8. There is absolutely zero reason that Landry should not be your main WR2 in drafts this year. His ADP is currently WR32 in BestBall10s. This is crazy.

The touchdown regression just has to hit, right? Leonard Fournette scored only three touchdowns last season. We know touchdowns have a ton of variance baked in, but it’s going to be almost impossible for him to have less than last year.

The main reason Fournette was so reliable in 2019 was the 100 targets and 76 receptions. The Jaguars brought in Chris Thompson to help in the pass game, but with his injury history I doubt that either: A) Thompson will be playing enough meaningful snaps to hold back Fournette, or B) He will stay healthy enough to hold back Fournette. It’s a win-win scenario.

Henry was extremely consistent once he made it back to the field following his Week 1 injury. He scored 10 or more fantasy points in eight of his 12 games and finished the year eighth in points per game for tight ends, though his floor ranking was fifth.

The Chargers signed Tyrod Taylor and drafted Justin Herbert sixth overall after letting Philip Rivers walk in free agency. During Taylor's three seasons with the Bills, he targeted veteran tight end Charles Clay 238 times. Henry now has three strongly graded seasons — 73.2, 87.2 and 83.0 — under his belt outside of an injured 2018 season. It’s very likely that he sees an uptick in usage for 2020.