With quarterback Andy Dalton under contract through the 2020 season, the Cincinnati Bengals will continue to press forward in surrounding the Red Rifle with enough supporting talent to have a shot at a deep playoff run. As such, the Bengals will be smart to address glaring weaknesses along their offensive line and add another receiving threat to pair with A.J. Green.

Losing tackle Andrew Whitworth and guard Kevin Zeitler to free agency last offseason, Cincinnati took a significant step back in the trenches from a year ago. After ranking 10th in PFF’s pass-blocking efficiency as a unit in 2016, the Bengals’ offensive line tied for 20th in the same stat this past season.

At wide receiver, the 31-year old Brandon LaFell and youngsters Alex Erickson (25) and Tyler Boyd (23) have underwhelmed alongside Green. The three combined for 953 receiving yards in 2017, while Green amassed 1,078 receiving yards on his own. 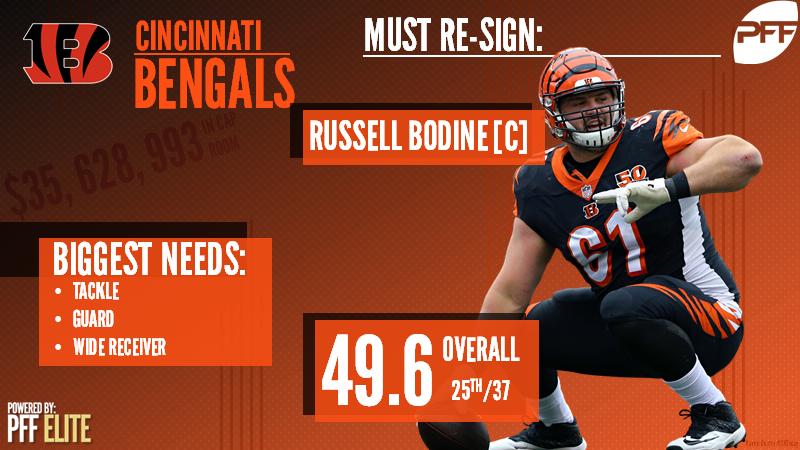 Bengals center Russell Bodine, who was one of two Cincinnati offensive linemen (Clint Boling) to start all 16 games a year ago, may be the only player within the team’s 11-man free agent crop general manager Mike Brown even considers re-signing. However, despite his worthwhile snap count, Bodine earned a 46.9 overall grade in 2017 and has earned a grade above 55.0 in just one of his four career years.

Veteran running back Jeremy Hill has been phased out of the Bengals’ offense with the emergence of Joe Mixon, as has tight end Tyler Eifert.

A former first-rounder out of Notre Dame, Eifert displayed star-level potential throughout his five-year stint in Cincinnati, but injuries have caused him to earn the infamous ‘damaged goods’ label. Factor in tight end Tyler Kroft’s flashes of strong play last season, and Eifert’s chances of returning drop even further.

Of course, veterans Pat Sims, Kevin Minter and Kevin Huber all could provide value to a Cincinnati roster in no position to turn talent away, but to dub any of their free agents as a ‘Must Re-sign’ would be too far from the truth.

While left guard Clint Boling (75.6 overall grade) held his own in 2017, the same couldn’t be said for his compliment Trey Hopkins, as the Bengals right guard earned a 48.4 overall grade across 707 offensive snaps in 2017. With that being said, pairing Boling with Carolina Panthers guard Andrew Norwell could be the solution needed to help sure up Cincinnati’s interior offensive line.

Norwell, PFF’s All-Pro left guard this past season, allowed just 13 hurries in pass protection and earned the fourth-lowest percentage of negatively graded run blocks en route to a career-high 88.8 overall grade in 2017. With four years of high-level play under his belt, Norwell is one of the safest – if not the safest – free agent currently available.

Though likely vying for more a long-term solution at offensive tackle, Cincinnati would benefit from a stop-gap starter at the position in New England Patriots’ Nate Solder. Turning 30 years old this offseason, Solder had quite an up-and-down season in terms of pass protection, leading to his 75.1 overall grade. However, Solder’s run blocking has yet to falter throughout his seven-year career, as he tied for ninth among qualifying tackles in run-block grade (83.4) last season.

Seattle Seahawks wide receiver Paul Richardson will join a 2018 free agent class that runs deep at the wide receiver position, making it that much more likely he slips through the cracks to a receiver-needy team on a cheaper, low-end deal.

Richardson worked behind the scenes amidst a talented receiving group in Seattle early in his career, and injury (ACL) cost him 15 games of his sophomore campaign. Finally inserted into a more prominent role in 2017, Richardson caught 44 passes for 703 yards and six touchdowns en route to a 72.4 overall grade.