• Five defenses had impressive perfectly covered play rates above 60% in Week 5, with the San Francisco 49ers ultimately taking the top spot at just about 65%. But it came at a cost: rising CB Emmanuel Moseley and vet S Jimmie Ward were lost to injuries.

• The winning team created more Perfectly Covered Plays 10/16 times in Week 5, continuing a trend of around 10-11 teams winning while having the higher percentage.

Following our extensive research on coverage in football, and the creation of Perfectly Covered Plays and Adjusted Coverage Rate, we now have recent data to analyze from the fifth week of the NFL season.

Let's evaluate how each team and defender performed in coverage in Week 5. 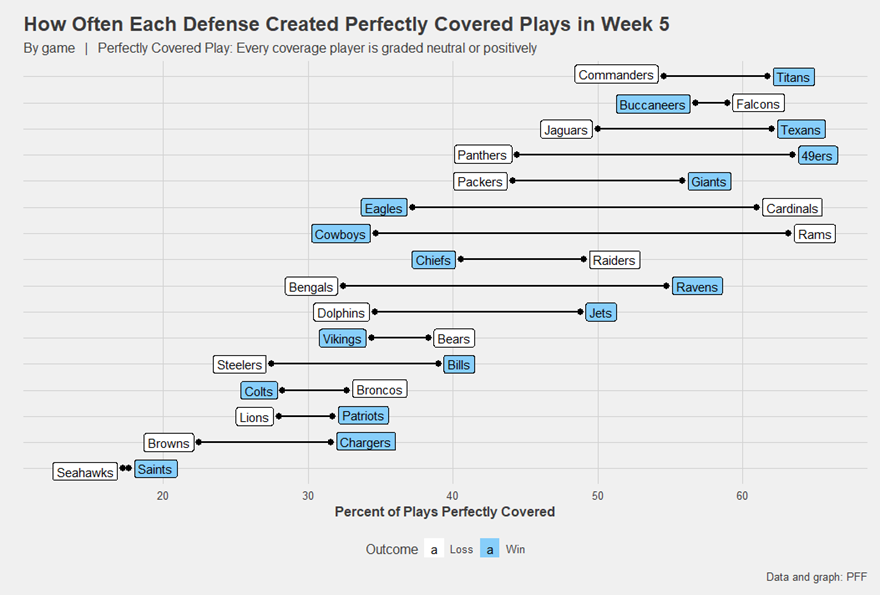 Five defenses had impressive perfectly covered play rates above 60%, with the San Francisco 49ers ultimately taking the top spot at just about 65%. However, they did lose two key coverage players in their secondary in CB Emmanuel Moseley and S Jimmie Ward, both of whom will likely miss a decent amount of time. As the Los Angeles Rams offense is struggling to get in a rhythm, their defense picked up right where it left off, right back near the top of the perfectly covered plays stat, ranking second this week.

On the other hand, the Seattle Seahawks and New Orleans Saints created the smallest percentage of perfectly covered plays, both at less than 20%. The Seahawks have been notorious for ranking towards the bottom in this statistic this season, while the Saints have been about average coming into Week 5. The Seahawks’ offense has been great at evading perfectly covered plays, so once (or if) their defense can pick up the slack, they might be a dangerous team.

This week, the winning team had created more Perfectly Covered Plays 10/16 times. This trend of around 10 and 11 teams winning while having the higher percent has been a trend this season.

Perfectly Covered Plays is not just a defensive stat; preventing such plays is relevant for offenses, too. For the third week this season, the Carolina Panthers’ offense faced the highest percent of perfectly covered plays, and with their offense running out of QB options and the panic button firmly pressed, look to see if anything changes under interim head coach Steve Wilks after Matt Rhule was fired on Monday.

10 safeties were perfect in coverage this week, the highest of any week so far. Talanoa Hufanga, Julian Love, Jaquan Brisker, and Jevon Holland have all had a perfect week before, while the others make their first appearances here. New York Jets S Lamarcus Joyner has gotten better in every game this season, after blowing a good amount of coverages in earlier weeks, and was ultimately perfect this week.

Six linebackers were perfect in coverage this week. However, Drue Tranquill is the only one to have been perfect in coverage in another week this season. Cole Holcomb had a great day locking down the entire Tennessee Titans receiving corps, and the Arizona Cardinals‘ duo of Ben Niemann and Zaven Collins was also perfect.

Cornerback Steven Nelson has bounced around a couple different teams, but he was a major part of the Houston Texans’ coverage success this week, locking down Christian Kirk and Evan Engram. A pair of Titans also make the top 5, and Denver Broncos CB Essang Bassey was the only cornerback in the dud of a Thursday night game to have an above-average True Coverage rate.

This week had some insane big plays, pass breakups, and missed opportunities, especially when they meant the most. In the final play of the Colts vs Broncos game, CB Stephon Gilmore made the game-winning pass breakup while covering Courtland Sutton, even after having a below-average game covering the Broncos pass-catchers.

The Cincinnati Bengals didn’t get the win in their close game against the Ravens, but it easily could’ve been a blowout if Lamar Jackson didn’t miss some wide-open receivers. Eli Apple and Vonn Bell each received a ton of negative coverage grades by leaving receivers Devin Duvernay, Demarcus Robinson, and Tylan Wallace wide open at times, and if Lamar hits those throws, this game could’ve been over way earlier than a game-winning field goal in the closing minutes.

We can also check in on some 2022 draft picks based on how they performed in coverage. The rookies with the highest True Coverage Rates in Week 5 were:

It was a great week for rookie coverage players, with a trio of second rounders taking the top spots at their position. Atlanta Falcons LB Troy Andersen finally dethroned Green Bay Packers LB Quay Walker (who occupied the top spot from Weeks 1-4), and was perfect in coverage this week. Chicago Bears safety Jaquan Brisker gets his second coverage rookie of the week honor, and was perfect in covering pass catchers, specifically Irv Smith Jr.. Titans CB Roger McCreary also had a great day locking down all the Commanders receivers.

However, some rookies struggled a little this week, with CB Damarri Mathis (78.1%), LB Devin Lloyd (79.2%), and S Kyle Hamilton (84.6%) having the lowest true coverage rates at their respective positions. Mathis has been up and down for the Broncos, but he let Alec Pierce get open one too many times this week. Lloyd and Hamilton have been slightly below average in covering receivers so far, and this week was no different.

The top 4 teams that made the least amount of coverage mistakes this week were all within 1% of each other, but the Texans take the top spot. Their impressive coverage performance held the Jaguars’ offense to just two field goals and no touchdowns. The Cardinals’ coverage unit also had a great day, highlighted by their trio of linebackers, while the defensive backs of the Titans were the stars of their defense.

The Saints’ coverage unit had a rough showing against the Seahawks, allowing Geno Smith to have a massive passer rating of 139.7. Every one of their coverage players had true coverage rates below the league average in their respective positions, with their cornerbacks struggling the most. The Detroit Lions made the top 2 most coverage mistakes for the third week in a row, and the Seahawks have been in the bottom 5 every week this season.

After another great week at perfectly covering plays, the 49ers dethroned the Bengals and now occupy the top spot with nearly 51% of their defensive plays being perfectly covered. The Bengals’ coverage unit started off strong, but has had a lower perfectly covered play rate in each subsequent game this season. The Cardinals also leaped over the Bengals after having a couple great performances in Weeks 4 and 5.

The Seahawks coverage unit is in trouble, and the rookies have shown they need more help at holding down the fort. The Jamal Adams loss has been felt greatly, as their veteran presence is out for the season. The Seahawks have perfectly covered 10% less plays than the Commanders, who come in at 31st, and that margin just keeps getting bigger. Next week, they face a Cardinals offense that hasn’t been great at evading perfectly covered plays, so maybe this can be the game where the Seahawks defense puts it all together.

Some teams’ man and zone rates will vary by opponent, while some will stay steady throughout the season. This week, the league as a whole ran man coverage 31.7% of the time, which brings the cumulative average to 29.4%, therefore running zone on 70.6% of plays. We can see how each team’s percentage of running man and zone coverage evolves each week. Here are the teams that ran the most man and zone so far this season:

This is the same top 3 teams that run the most man and zone as last week. In their game against each other, the Lions and Patriots continued running large amounts of man coverage, ultimately only to the Patriots’ benefit. The Rams, Vikings, and Bills are proving to be mostly zone coverage defenses, keeping similar gameplans against each of their opponents this season.

Also check out weekly Man and Zone Analysis articles coming out soon for more in-depth analyses on this and predictions based on Week 6 matchups.