In this article, we will look into which positions and teams messed up coverage the most and least in the past three seasons. Using this, we also calculated which players and positions were worth the most to a team’s defense in a new wins above replacement (WAR) statistic.

“Messing up” coverage means that the coverage defender received a negative coverage grade and was beaten by the wide receiver on that play. This varies greatly depending on the defender’s position, so how often did each main coverage position “mess up” its coverage, and how does this contribute to the offense’s EPA?

As expected, cornerbacks mess up in coverage the most out of the three main coverage positions, but the offense’s EPA when a cornerback gets beat is the lowest — even when that player is the only one that messed up on the play. This may be surprising given that cornerbacks can give up an explosive play when beaten.

Safeties mess up coverage the least — largely because they receive the most “neutral” coverage grades, as many plays occur in front of the safeties.

When linebackers (who get beat 12% of the time) mess up — whether it's by themselves or in combination with another position messing up — the offense’s EPA is the highest, which further shows that linebackers have a crucial role in a defense’s coverage unit. When they make a mistake, it leaves valuable parts of the field — especially the middle — open for the offense to exploit.

We can also look at which defenses’ cornerbacks, safeties, and linebackers messed up coverage most and least often. This does not depend on one player; instead, it depends on how often one of these players on each team messed up coverage. For example, a team could have an outstanding cornerback that rarely gets beat in coverage, but the team could finish toward the bottom of this ranking due to some of their other cornerbacks being “weak links.”

This only proves how outstanding the Denver Broncos’ coverage unit is, as their linebackers mess up in coverage the least among NFL teams while safeties messed up the second-least and cornerbacks the fifth-least.

The Los Angeles Rams’ cornerbacks, which includes No. 1 ranked cornerback Jalen Ramsey (per PFF Analyst Anthony Treash), are justifiably on top of this list, messing up in coverage four percent less than the league average.

Lastly, the Buffalo Bills’ safeties and cornerbacks rank first and second, respectively, in this aspect, and getting Tre’Davious White back from injury and adding Kaiir Elam in the draft will only make their cornerback group stronger.

The Detroit Lions’ secondary has struggled in recent years, and their safeties and cornerbacks were in the bottom five in terms of messing up in coverage and getting beat by receivers. Their 2020 first-round pick Jeff Okudah, who currently messes up in coverage 20% of the time, can potentially help out this weaker secondary if he steps up and stays healthy.

Another team that should be looking to bolster its coverage is the Las Vegas Raiders, who had a really bad 2020 in terms of creating perfectly covered plays (they only perfectly covered about 17% of pass plays, which is over 20% below the league average). The Divine Deablo, who successfully covered receivers an impressive 89% of the time in his first season, addition is a bright spot for a cornerback unit that messed up the highest percentage of plays from 2019-2021.

Lastly, the Pittsburgh Steelers’ linebackers struggled in coverage the most over the past three seasons, but gaining Myles Jack, who successfully covers receivers 90% of the time, will likely improve this unit.

What are a player and position's worth to a defense’s coverage unit?

Taking the difference of those two proportions for each player and multiplying it by both the total plays that player was on the field for in a season as well as the difference in EPA for a perfectly covered play and non-perfectly covered play (which is -0.6), we get an initial wins above replacement (WAR) value for each coverage player, which we divide by 40 for the average amount of passes per game. However, this needs to be adjusted for the player's position (safety, cornerback, or linebacker) because each coverage position messes up at a different rate. Multiplying the player’s position mess-up percentage by their initial wins above replacement value gives us our final wins above replacement (WAR) statistic for each defender in coverage. 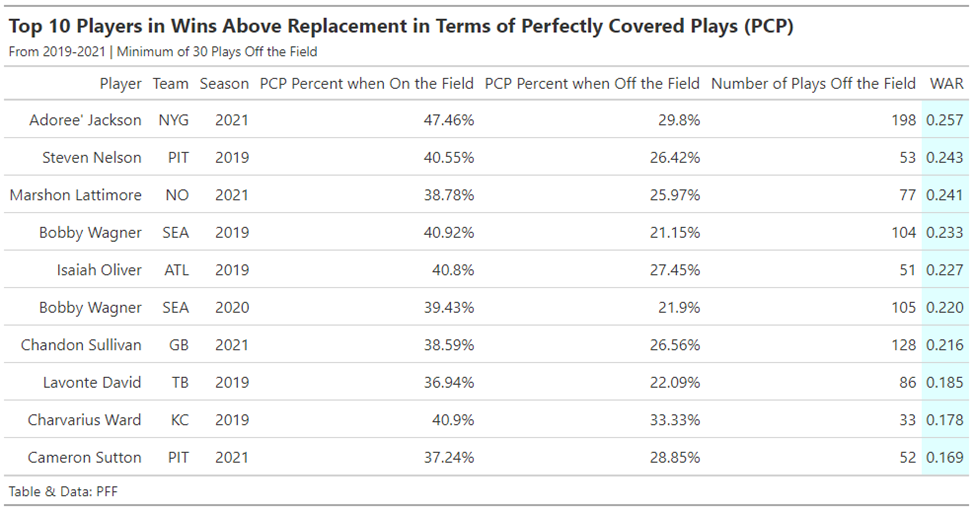 These numbers, especially when considering that they are only for one facet of play, make sense from an order of magnitude perspective when compared with Eric Eager and George Chahrouri's work on WAR.

Bobby Wagner has arguably been the best player on a generally weak Seattle Seahawks coverage unit over the past three seasons, appearing on this list twice. He missed around 100 plays in both the 2019 and 2020 seasons, and his absence was greatly felt, as his team perfectly covered nearly 20% fewer plays without him on the field.

Nonetheless, according to this statistic, Adoree’ Jackson has been the most valuable coverage defender over the past three seasons, bolstering the New York Giants cornerback unit in his first season with the team. He missed nearly one-third of the team’s plays in 2021, but the Giants perfectly covered a gigantic 47% of plays while he was on the field compared to just about 30% when he was absent.

Also worth noting from the above list, seven of these players are cornerbacks and three are linebackers. This list contains no safeties and, in fact, the first safety to appear on this list is Chuck Clark – who comes in at 28th with a 0.121 WAR in the 2021 season with the Baltimore Ravens (and he is more of a linebacker-like safety). Because there aren't a lot of safeties toward the top of this list, it shows that safeties might not play as key of a role in a defense's coverage. This may justify Kyle Hamilton’s “fall” in the 2022 NFL Draft, as most analysts regarded him as a top-10, or even top-five, prospect before he fell to the Ravens at pick No. 14. In 2021, there were no safeties taken in the first round of the draft (although a 2021 first-rounder was used in the Jamal Adams trade).

Are safeties really not as important to the defense as they used to be? This certainly adds to that narrative — even if it disagrees with some of the work PFF has been doing for some time.