Continuing the Signature Stat Spotlight series, we take on tight ends and the advanced stats that play into evaluating pass-catchers at the NFL and FBS level.

Yards per route run is the crown jewel of PFF’s advanced stats for wide receivers and tight ends. Dividing total receiving yards recorded by the number of routes run in a given game, season, career, etc. provides a great one-number summary of just how efficient a receiver is on a down-by-down basis. Receivers need to create separation, earn targets, secure passes and generate yards after the catch to have a high yards per route run figure, making it a product of multiple factors and, as a result, a fantastic advanced stat made available to all of PFF’s ELITE subscribers.

Not only was George Kittle (94.3) the highest-graded tight end in football in 2019, but the San Francisco 49ers phenom was also the league’s highest-graded overall player with at least 400 primary (offense or defense) snaps played. He also led all qualifiers at his position in yards per route run (2.86) and PFF receiving grade (94.2) while catching 93-of-117 targets for 1,124 for 53 first downs and five touchdowns. 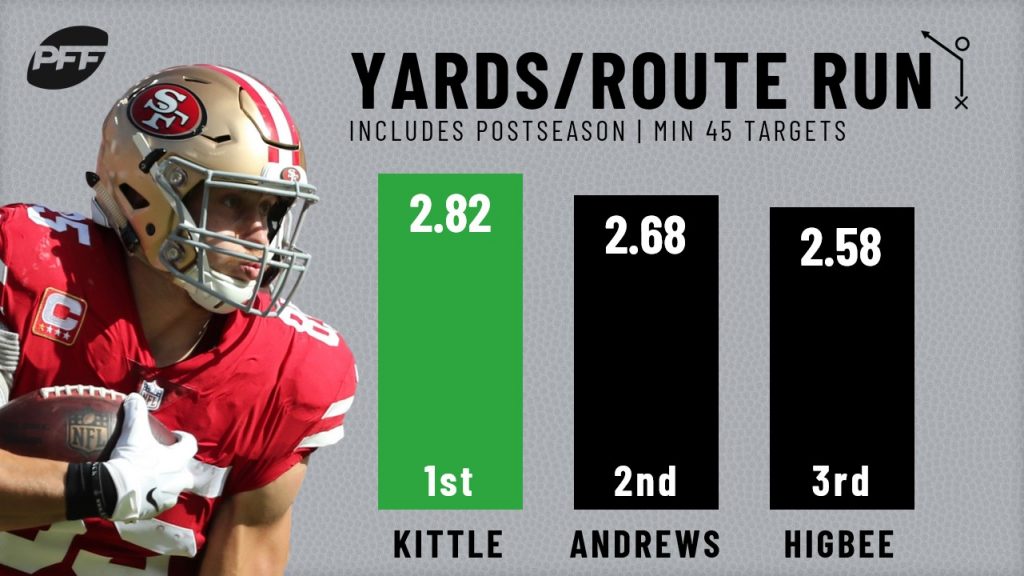 Only seven NFL tight ends recorded 10 or more deep – 20-plus air yards – targets in 2019. Kansas City Chiefs’ Travis Kelce led all at the position in deep receiving yards with 274 this past season while Andrews finished second at 224.

Rookies Noah Fant and Irv Smith Jr. both struggled to produce at a high level from the slot in 2019. Fant ranked last among qualifiers in slot yards per route run at 0.28, and Smith wasn’t much better at 0.51.

Detroit Lions rookie T.J. Hockenson recorded the lowest contested-catch percentage of any qualifying tight end in 2019. The former Iowa product caught just five of his 17 contested targets a year ago.

Among the 22 NFL tight ends with at least 40 receptions in 2019, Fant ranked first in yards after the catch per reception at 8.28. Tennessee Titans’ Jonnu Smith (7.54) ranked second and Kittle ranked third (7.26). Cincinnati Bengals’ Tyler Eifert recorded the lowest average of the group 2.63 in 2019.

To continue to learn more about PFF’s advanced stats,  subscribe to PFF’s ELITE subscription to dive into the numbers yourself throughout the offseason and into next season.