The fantasy value of yards per route run

Efficiency is key in fantasy football … for most of the positions. For wide receivers, volume-based metrics are much more predictive (in terms of predicting fantasy points in the following season) and stable than any efficiency metrics. (For more on that subject, check out this piece on the importance of efficiency stats for fantasy.)

However, there was one metric that far exceeded my expectations — yards per route run.

Over the past 10 seasons, there have been 501 instances of a wide receiver drawing at least 50 targets in back-to-back seasons. Using this as our sample, yards per route run had a 0.43 correlation to receiving fantasy points scored in the following season. Raw targets fared only slightly better (0.46) and yards per target fared much worse (0.19).

Yards per route run is one of my favorite metrics, and it’s why you might have noticed I’ll frequently reference it when attempting to identify breakout candidates at the wide receiver position. It’s also why you’ll rarely see me reference yards per target, or why I’m apt to chastise fantasy analysts who put too much stock into that and many other efficiency metrics.

If you’re a PFF Elite subscriber you can access our yards per route run data for wide receivers, running backs, and/or tight ends (here).

As outlined in the article linked above, the correlations are even stronger at the extremes. I wrote, “on average, wide receivers who ranked top-20 in yards per route run in one season scored 154% more fantasy points than bottom-20 wide receivers in the following season.”

With this in mind, let’s look at the top-14 wide receivers (min. 50 targets) by yards per route run last season. 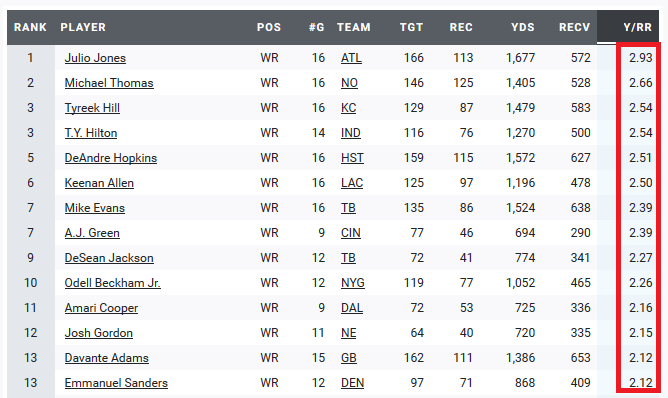 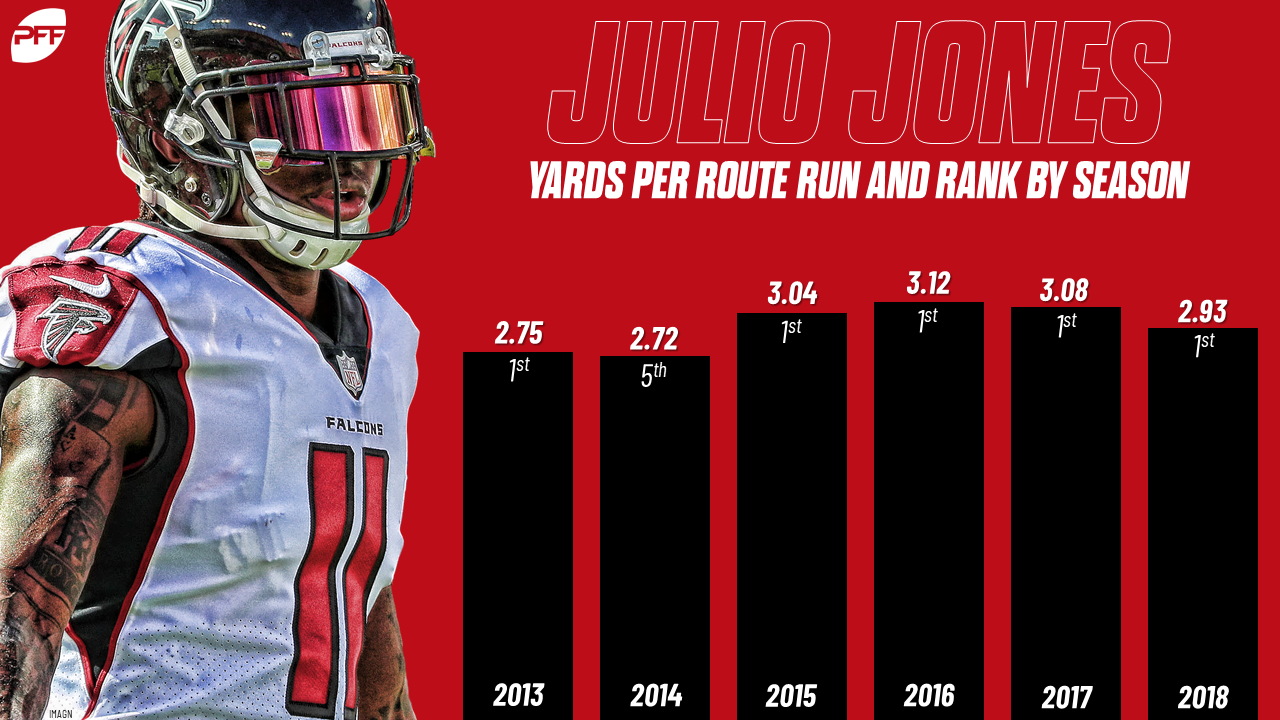 Since entering the league, Jones leads all (of 280 qualifying) wide receivers in yards per route (2.72) and Antonio Brown ranks second (2.44). If Jones ran as many routes as Brown over this span, he'd total 1,284 more yards.

Over the past five seasons, Hilton has ranked third (2018), 26th, third, 32nd, and 10th in yards per route run. In other words, when Andrew Luck is healthy, it’s safe to call Hilton one of the most-efficient wide receivers in the NFL. In terms of fantasy production, we can see a similar trend — Hilton has ranked 14th (14 games), 27th, fifth, 22nd, and 12th in fantasy points scored over this span. In 2019, with Luck at full health, he’s appropriately priced with an ADP of WR11.

Hill has ranked third, sixth, and fourth in yards per route run since entering the league. Over this span, he also leads the league in fantasy points scored over expectation, scoring a whopping 174.2 fantasy points over what a perfectly average player should have scored with an identical workload. Although Jones really is the yards per route run king, there might be a more compelling case to make for Hill as the league’s most fantasy-efficient wide receiver.

Unlike most of these other wide receivers, Hopkins has the benefit of both hyper-efficiency and good volume. Over the past two seasons, he ranks first in targets (323), third in routes run (1,203), and fourth in yards per route run (2.45). In your 2019 drafts, either Hopkins or Davante Adams (ranked 13th in yards per route run last year) should be selected as the first wide receiver off the board. 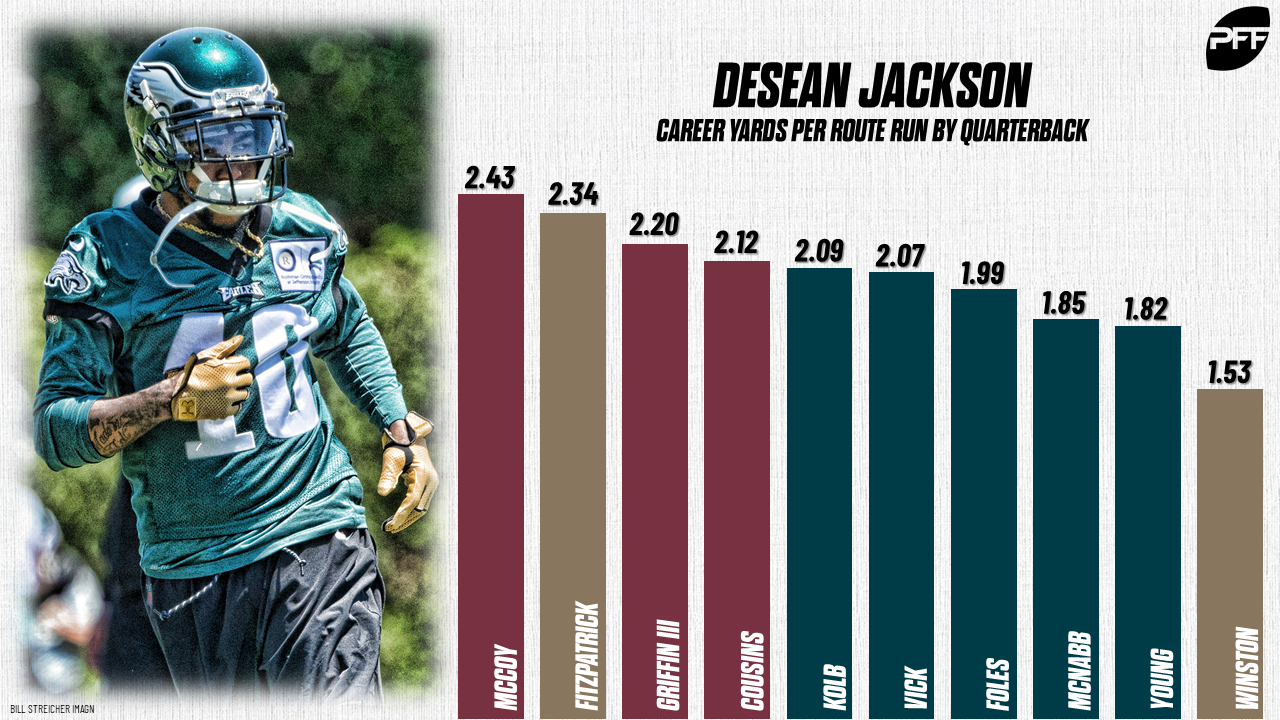 After ranking 44th in yards per route run in 2017, Jackson’s ranking of ninth-best last year might come as a surprise to some, but not to me. Jackson also ranked 12th-, ninth-, and fifth-best over the prior three seasons. Jackson struggled mightily with Jameis Winston under center (1.53 yards per route run), but was far more efficient with Ryan Fitzpatrick (2.34), and, actually, every other quarterback he’s ever played with.

Winston has struggled with deep passing efficiency over the past two seasons and throughout the majority of his career – Carson Wentz has been much better — while Jackson has been just as good as ever (ranking as our 18th-highest-graded receiver over the past two seasons). Due in part to the change in scenery, Jackson is one of my favorite sleepers at the position this year.

Cooper ranked 26th in yards per route run last year (1.85), but, if only looking at his time in Dallas, he would have ranked 11th (2.16). This was significantly better than prior finishes of 43rd (2017), 19th, and 30th. Cooper’s efficiency in Dallas is encouraging, but not something I’d be willing to pay up for at ADP (WR12). Cooper's six games with Dallas is a small sample in comparison to his Oakland tenure, where he consistently fell short of expectations. On top of that, he's also consistently been the most frustrating fantasy wide receiver to own on a week-to-week-basis, his time in Dallas not excluded.

In February, Ian Rapoport reported that “there’s a chance” Gordon gets reinstated in time for training camp. In June, pictures surfaced from a private workout between Gordon and Tom Brady. Gordon might be a longshot to be reinstated, but at current ADP (UDFA), that potential reward is well worth the minimal cost to acquire him. Last season, Gordon ranked 23rd in yards per route run (1.94), or 12th if only counting his time with the Patriots (2.15). Across his previous three seasons, he averaged 2.01, 2.20, and 2.68 yards per route run. Clearly, he’s still got it. 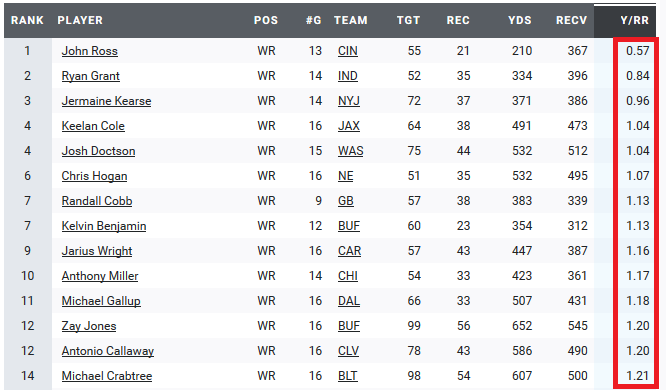 A.J. Green has ranked top-10 in yards per route run in each of the past seven seasons. Last year, Tyler Boyd ranked 19th. Both are very strong values at ADP. Ross, meanwhile, is a much tougher sell. His 0.57 yards per route run was not only worst in the league last year, it’s the worst number we’ve ever recorded in PFF history (2007-2018). He’s an easy fade in 2019 drafts.

Doctson is another easy fade, ranking bottom-15 in yards per route run for the second consecutive season. Head coach Jay Gruden seems to be growing impatient with Doctson’s development, and after Doctson himself has said he expects to be a free agent in 2020, it’s hard to imagine he’ll return much value in 2019.

Of the wide receivers on this end of the list, there’s only one I’m not pessimistic and actually excited about. Miller struggled with efficiency in his rookie season but also struggled with injuries, and, because of that, I’m willing to completely excuse his 2018 season. Miller suffered a shoulder injury in Week 3 that would later become fully dislocated “numerous” times during the course of the season. Prior to that injury, Miller was one of my favorite breakout candidates, partly due to his impressive yards per route run numbers in college. In college in 2017, Miller ranked sixth-best of 179 qualifying wide receivers in yards per route run from the slot (3.43), which is where he ran 69% of his routes last year.

Ross’s 0.57 yards per route run average was the worst in PFF history, but Jones’ 2017 season (0.69) ranked fourth-worst. With little improvement in his sophomore season (1.20), ranking 12th-worst, it’s time to abandon hope of a breakout. In 2019, he’ll likely be stuck riding the bench behind Cole Beasley, Robert Foster, and John Brown in 3WR sets.