The candidates to be 2019's overall fantasy WR1

Over the last five years, only two different players have led the league in PPR fantasy football scoring at the wide receiver position: Antonio Brown topped the list in 2014-2016, and DeAndre Hopkins has done it the last two years. In the last eight years, only four players have topped the list. In other words, while there is extreme turnover at the top of the running back standings and pretty strong turnover atop quarterbacks, wide receiver is much more consistent.

This is the average production of the No. 1 fantasy wide receiver across the last decade:

Those are the thresholds, then. If a receiver isn’t a reasonably safe bet for 150 targets, 1,300 yards and double-digit touchdowns, then he’s not a strong candidate to finish No. 1.

Sure, it isn’t sexy to say that the guy who has led the position two years in a row is the favorite to do it again, but that doesn’t change anything. Hopkins is one of only two receivers to hit all three of our thresholds for WR1 candidacy in 2018 (look down one subsection to find the next). With Deshaun Watson the best quarterback Hopkins has ever played with by a factor of about 10, and the Texans finally invested some draft capital in the offensive line, Hopkins’ stock could stay just as high.

What would have to happen? Basically just stay the course. Watson needs to stay healthy, of course, because the Texans’ current backup is AJ McCarron. But otherwise, the pieces are all in place for Hopkins to maintain an elite floor with a best-overall ceiling.

What are his chances? There is one thing potentially working against Hopkins — supporting cast. He hasn’t had a good No. 2 receiver over a full 16-game season since Andre Johnson during the early part of Hopkins’ career. But if Will Fuller and/or Keke Coutee can stay healthy all year in 2019, they could absorb enough of the star’s work to keep him outside of the No. 1 overall spot. But generally, you have to like Hopkins’ odds.

Remember a few paragraphs ago when I noted that Hopkins was one of two receivers to hit all three WR1 thresholds a year ago? Here’s the other name. Adams actually topped Hopkins in targets (162-159) and touchdowns (13-11) in 2018, coming in almost 200 yards behind Hopkins (1,386 to 1,572). He finished 10 points out of the No. 1 receiver slot despite missing Week 17, and with at least 10 PPR points in every game played, a healthy Adams in Week 17 probably would have finished No. 1. The recent Packers have made their bones in recent years with multiple top-flight receivers, with some combination of Adams, Jordy Nelson, Randall Cobb, Donald Driver, James Jones, Greg Jennings, you name it. Now? It’s Adams and a bunch of question marks.

What would have to happen? Not a thing. We saw the exact blueprint for a WR1 season from Adams in 2018, and if he can repeat that and stay healthy for 16 games, he’s in good shape.

What are his chances? Excellent. If you are putting money on someone who isn’t Hopkins or Adams in 2019, you need a pretty good argument. (To be fair, there are good arguments to be made.) 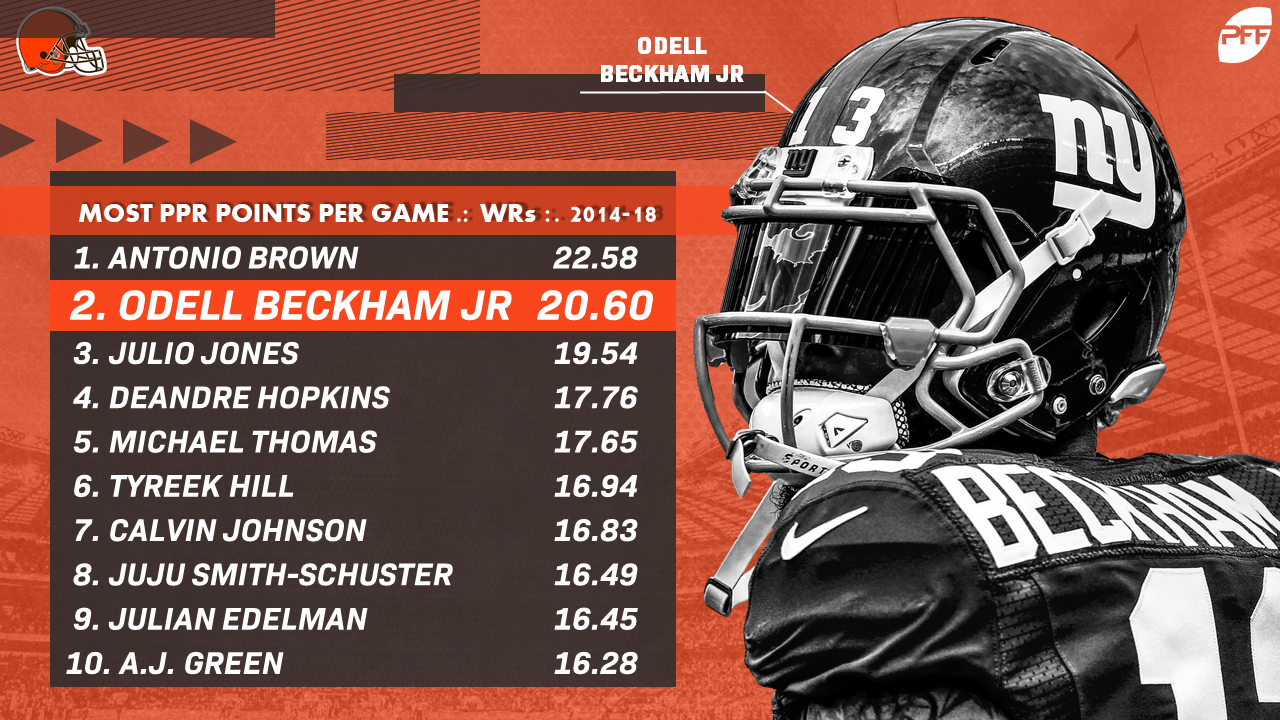 Since entering the league, Beckham sits behind only Antonio Brown in PPR points per game (20.6; Brown is at 22.6). His problem, though, is that you have to include the “per game” caveat, as Beckham has only played all 16 games once in five seasons and has played in 16 total across the last two years. Now in Cleveland, with the best quarterback and maybe best overall offensive supporting cast he’s ever had, Beckham’s ceiling is huge. He reached our WR1 thresholds in 2015 and 2016 and was on pace to come very close in 2018.

What would have to happen? Obviously, health is the first thing. If Beckham can’t play 16 games, his other-worldly talent might not matter. Assuming that, though, his great supporting cast could actually be a hindrance. With Jarvis Landry, David Njoku, Nick Chubb, Kareem Hunt, for-now Duke Johnson, and all the team’s tertiary receivers, will Beckham get enough targets? You think yes, but there are so many mouths to feed that 150 targets might not be a guarantee.

What are his chances? Very good. It starts with health, but Beckham could easily be the No. 1.

The #NeverJulio crowd felt fairly vindicated in 2018 when Jones went through Week 8 with zero touchdowns despite sitting second in the league with 812 receiving yards. That same crowd had a worse defense the rest of the season, as Jones scored eight touchdowns over the season’s final nine games, had the second-most yards again (865) and comfortably led all receivers in PPR scoring (194.6, 15.1 ahead of second-place JuJu Smith-Schuster. Jones is as safe as anyone in the world for 1,300 yards (he’s had 1,400-plus for five straight years), but he hasn’t had double-digit touchdowns since 2012 — the #NeverJulio crowd wasn’t all the way right about him, but the argument didn’t come from nowhere.

What would have to happen? Jones would have to score like he did in the second half of 2018 over the first half of the year or in 2017 (three scores on 143 targets). He obviously can do that, but he’d have to score at a rate he historically has not done much.

What are his chances? If you wanted to identify a receiver who would finish in the top-five (or so), there might be nobody with a better chance. But number one overall? #NeverJulio might be misguided, but it is a factor.

Smith-Schuster has 494.6 PPR points across his two seasons in the league, ninth among all receivers. Stefon Diggs, at 464.5, is the only other receiver in the top-20 who has had a teammate across both seasons ahead of him on the list. That makes sense — you wouldn’t expect a team to maintain two dominant receivers at the same time the way the Steelers and Vikings have in recent years. Whether Pittsburgh could have kept that going, we’ll never know, with Brown now in Oakland. But it does open up the No. 1 role (and another 634.0 points over the last two years) for Smith-Schuster or someone else in Pittsburgh.

What would have to happen? He’ll have to absorb the full Brown role and stave off the extra defensive attention that comes with being the No. 1. But the chance is definitely there. Somehow, this dude doesn’t even turn 23 until November.

What are his chances? Smith-Schuster is going to be a WR1 if he stays healthy. But the tougher defense he’s likely to face, extra age on Ben Roethlisberger and the sheer number of mouths to feed in the Pittsburgh receiver corps means he might not rise all the way to the overall No. 1. His shot is decent, but it’s not fantastic.

Speaking of Brown, he has the most receiver fantasy points over the last three years … and the last four … and five … and six … and seven … and eight … and nine … and 10. (And he’s only played nine years) That’s a testament to Brown’s dominance (at least 155 targets, 1,200 yards, and eight touchdowns in six straight years), but it’s also a small warning sign — he’ll be 31 when the new season starts.

What would have to happen? Brown will have to keep up his level of production on a new team, with a worse quarterback, in a less productive offense, and at an older age. Can he do all that? Absolutely. Will he? That’s a better question.

What are his chances? You never want to bet against Brown, but it seems like his days of being the overall No. 1 receiver are through. 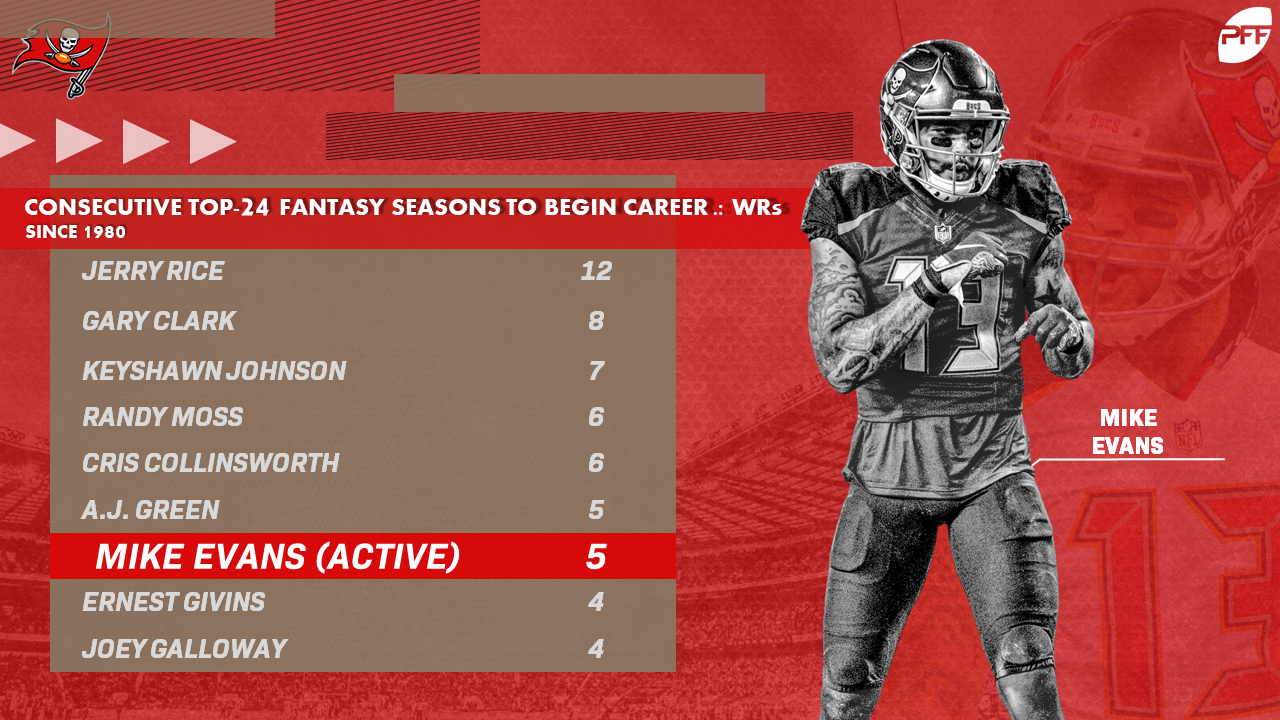 Evans has been in the league for five years and has been a top-24 fantasy receiver in all five, tied with A.J. Green for the longest such streak to start a career since Randy Moss entered the league and the sixth-longest to start a career since 1980. That’s definitely a point in his favor in this conversation. Working against him? He’s only finished better than ninth once, when he was the No. 3 receiver in 2016. Since his rookie year, he’s finished 13th, 22nd, third, 17th and ninth in scoring, which would indicate a lack of uber-elite ceiling.

What would have to happen? All the things that have worked in Evans’ favor this offseason would have to come to fruition. Adam Humphries and DeSean Jackson moved on in (respectively) free agency and trade, with Breshad Perriman the highest-profile replacement added to the roster. And the arrival of Bruce Arians as head coach should mean good things for the overall offense.

What are his chances? Still not great, but the Buccaneers have definitely set things up for Evans to be a monster in 2019 if he can improve his production even a little.