For whatever reason, 1990 was an awful year for birthing quarterbacks. That year produced quarterbacks that largely were in the 2013 draft class, a draft class that produced all of 86 fantasy points in 2016. That wasn’t the worst year for active quarterbacking, because the 2010 class was crap as well but does offer Sam Bradford, who was hurt in 2017, but overall, it’s hard to get worse than 1990.

But it’s fun. Today, I’m looking at which birth year can put together the best fantasy roster. You get one quarterback, two running backs, two wide receivers, a tight end, and a flex. (I thought about kickers, too, but really, who cares.) At the extremes of the years, I combined a little bit, and of course there’s just a “1985 and earlier” class.

It gave us 11 birth-year teams to evaluate. I’ll run through each roster quickly and establish the finalists, and we’ll decide from there. (You might disagree on some specifics, but heck, this isn't hard and fast science.) 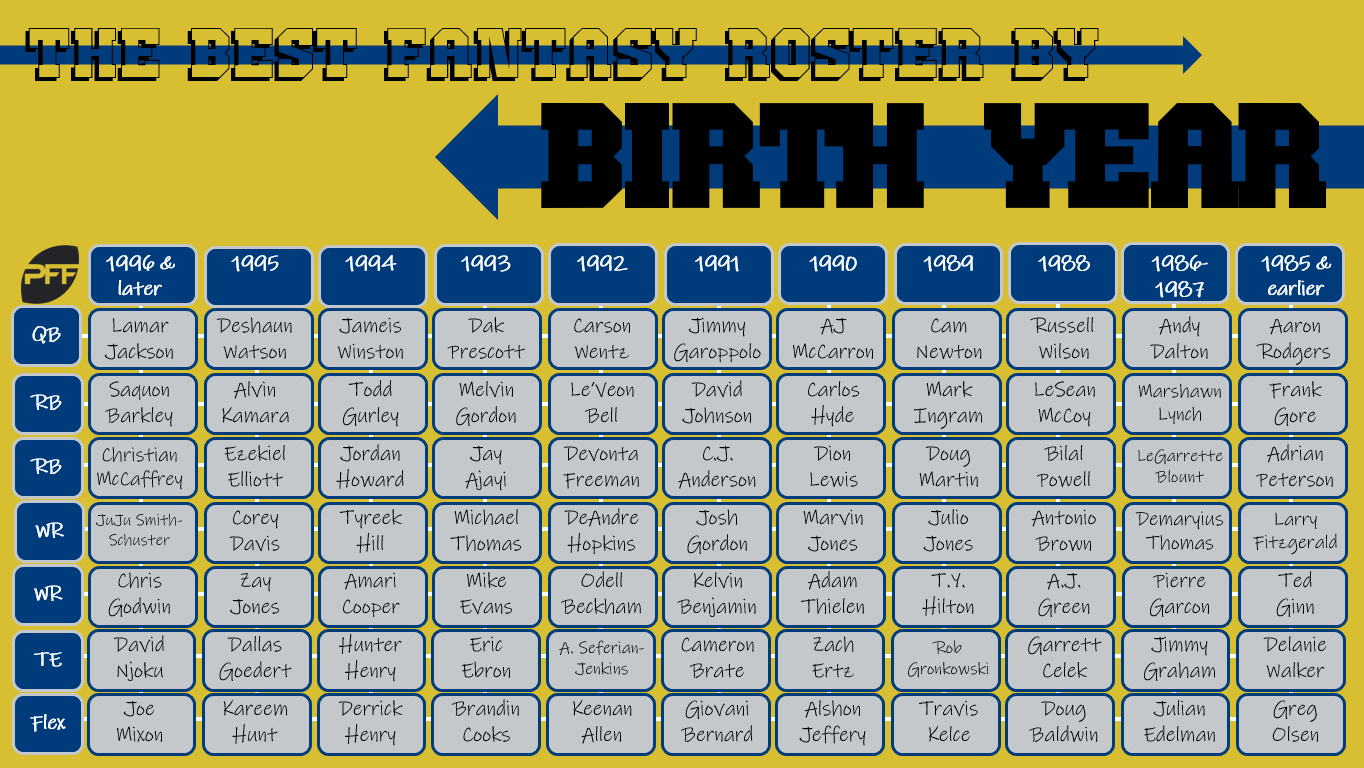 This roster is obviously huge on potential, and especially strong at running back. Check back in five years and this roster could take the crown. For now, though, it’s definitely an also-ran.

We’re seeing the effects of career length and age. Running backs are crushing it on the younger teams, but the pass-catchers have a ways to go yet. As amazing as it is, a roster with Kamara, Elliott, and Hunt can’t be considered a potential winner with Jones and Goedert also hanging out there.

I’m ignoring injuries for active players here, because I’m more looking at fantasy ability and not just 2018 outlook, but feel free to sub in Evan Engram here for Hunter Henry (and many probably would even without injury). This roster feels like a definite contender, even if Cooper has fallen flat a bit and the Titans refuse to let Derrick Henry be a bell cow. We’ll hold onto this one.

As strong as the receivers are on this roster, 1993 is a fluke year where the running backs and tight ends are … well, they’re fine, but this isn’t a championship roster.

I was surprised to see that Wentz was two years older than Winston, but the truth is he’s actually one year and one week older; it’s just that their birthdays are just before and just after the new year. Anyway, this roster is a definite contender, even with a bit of a disappointment at tight end with Seferian-Jenkins.

Johnson and Gordon have worlds of talent, but this is ultimately not much of a fantasy roster. I’m underwhelmed.

Seriously, McCarron. I don’t know who hurt you, 1990, but I apologize.

We’re reaching the outside edge of the typically productive running backs, which is how Martin makes his way onto this team. Still Newton and the pass-catchers are so incredible for fantasy that even the presence of Martin doesn’t keep it from being a contender.

We like to say that because tight ends pop late, they produce longer, but, um that’s Garrett Celek’s name there. I’ll call this one a contender still, based on just a ridiculous group of receivers, but that’s disappointing.

In the most recent years, one position (RB) dominated while others (WR and QB) suffered a bit. It’s flipped here. Quarterback is obviously excellent (and he could have Tom Brady, Drew Brees, Philip Rivers, Ben Roethlisberger, Matt Ryan, and Eli Manning as backups), but Peterson might not even have a job anymore and Gore is hanging on by a thread. Not even Rodgers can make this roster a contender.

I entered into this thinking some roster would be just dominant, or at least we’d get some rosters with no obvious weak spots. But look:

Because we’re looking for the best here, I’m going to eliminate 1994. Gurley aside, there just isn’t enough upside. After that, I’ll toss out 1989, for Martin’s flaws and concerns over Ingram’s longevity. That brings it down to our two flawed tight ends, and whether Seferian-Jenkins’ surroundings outweight Celek’s. Both have elite receiving groups. 1992 has the better running backs, while 1988 has the edge at quarterback. But in the end …

The winner is 1992. Austin Seferian-Jenkins and all. Who saw that coming.