With another week behind us, and some more fresh stats to analyze, I’m here to help you with your toughest fantasy football start/sit decisions of the week for Week 8

Sutton may have already been Denver’s WR1 — having seen at least seven targets in every game thus far, and ranking 18th in fantasy points per game (15.8) — but if he wasn’t, he certainly is now, following Emmanuel Sanders’ trade to the 49ers. That’s especially good news this week, against a Colts defense that has surrendered the third-most schedule-adjusted fantasy points per game to opposing WR1s.

Quietly, Stafford ranks seventh in fantasy points per game (20.1) and ninth in PFF grade. This week, with workhorse running back Kerryon Johnson replaced by pass-catching specialist Ty Johnson, the Lions take on a Giants defense that’s given up the most fantasy points per game to opposing quarterbacks when on the road (27.0). They also rank second-worst in yards per pass attempt allowed (8.9), third-worst in pressures forced per dropback (0.27), and sixth-worst in fantasy point allowed per dropback (0.57). Add it all up and Stafford feels like a safe bet to finish as a mid-range QB1 or better.

For the first time all season, Gurley has found his way into this article. Gurley ranks as just a mid-range RB2 in both volume (19th in XFP per game) and production (17th in actual fantasy points per game), which is a far cry from the Gurley of 2017 and 2018, but we could be seeing the Gurley of old this week. Los Angeles is favored by 12.5 points with the highest implied point total of the week (30.5), and the Bengals are giving up the most schedule-adjusted fantasy points per game to opposing running backs.

This one’s easy. Over the last two weeks, Diggs is averaging 9.5 targets, 163.5 yards, and 32.4 fantasy points per game. With Adam Thielen ruled out, against a Redskins secondary that has given up the seventh-most schedule-adjusted fantasy points per game to opposing wide receivers, Diggs should be viewed as a top-10 play.

Over the last four weeks, Carson has played on 82% of the team’s snaps, while averaging 18.8 XFP per game (fifth-most). This represents a dramatic shift in usage in contrast to the first three weeks of the season, when he played on 56% of the team’s snaps averaging 12.1 XFP per game. With this usage, we should expect mid-range RB1 returns, and especially this week as 6.5-point favorites against the Falcons. 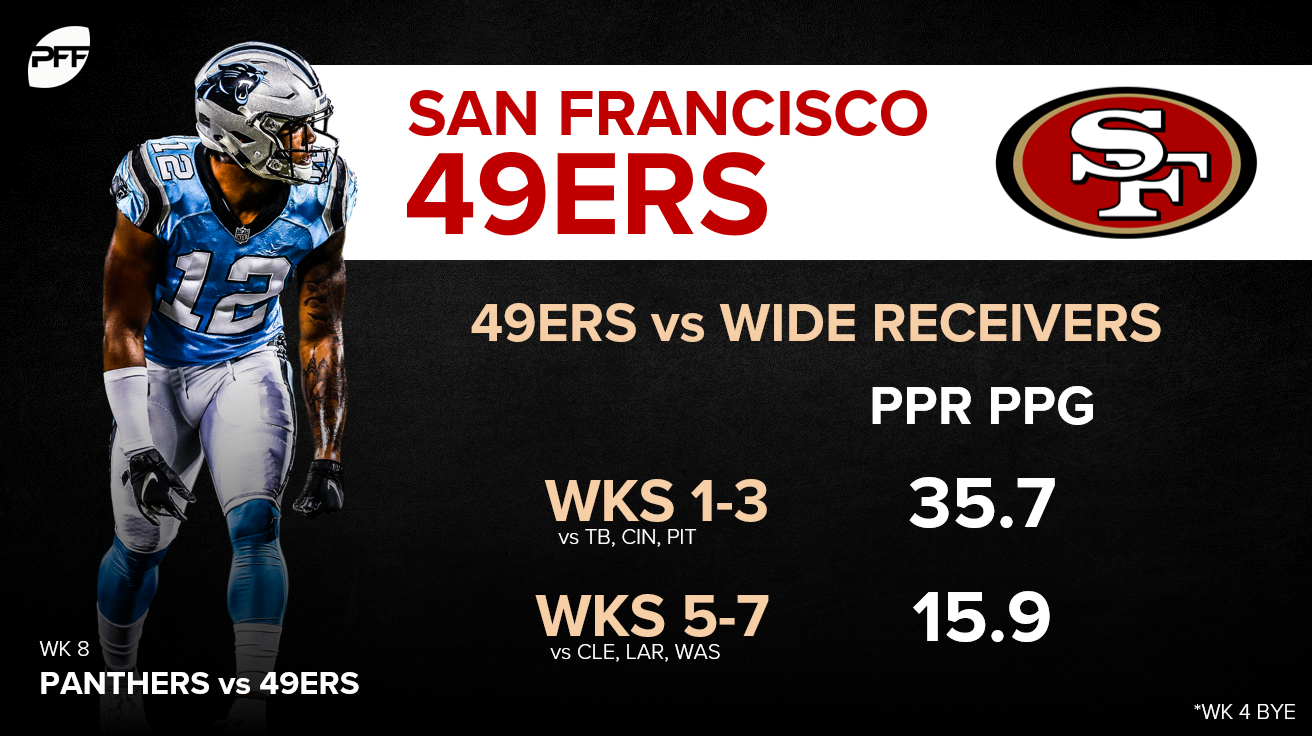 Over the last three weeks, the 49ers have held Odell Beckham Jr., Robert Woods, Brandin Cooks, Cooper Kupp, Terry McLaurin, and Paul Richardson to a combined 73 yards and zero touchdowns. Both Samuel and Moore should be downgraded to low-end WR3s.

Anderson has typically underwhelmed in shadow games, and especially so this year (5.5 yards per game). With shadow coverage expected against A.J. Bouye this week, Anderson is probably better left on your bench. Bouye covered Michael Thomas on 75% of his routes last week, holding him to just nine yards on one reception in his coverage.

Kansas City’s backfield is a committee, but McCoy has received the bulk of the work in recent weeks — 63% of the carries and 33% of the targets since Week 6. Expect extra work this week, with Patrick Mahomes out, and good efficiency, up against Green Bay’s run funnel defense. Green Bay ranks fifth-best in opposing passer rating (83.8) but tied for worst in running back yards per carry allowed (4.99).

McLaurin flopped last week in a brutal matchup against the 49ers but still ranks 16th in fantasy points per game (16.0). He’ll have a much softer draw this week, against a weak Minnesota secondary. For several years, Minnesota was one of the toughest matchups for wide receivers, but that’s no longer the case — Xavier Rhodes (age 29) has struggled and is no longer shadowing WR1s. As a whole, the Vikings are giving up the second-most fantasy points per game to opposing outside wide receivers (26.6), which is where McLaurin runs 80% of his routes.

Even since Melvin Gordon’s return, Ekeler is producing like a low-end RB1 (11th in fantasy points per game) on high-end RB2 volume (16th in XFP per game). Or, maybe we should be comparing him to a high-end WR2, as he’s averaging 9.3 targets per game and 72.7 receiving yards per game over this stretch. In any case, he’s at least the team’s primary pass-catching back (though I recently argued he’s deserving of more work), which means he’s a good bet to out-score Gordon and post at least mid-range RB2 returns. Chicago ranks top-six in yards allowed per carry (3.65), but bottom-six in receiving fantasy points per game allowed to enemy running backs (13.3).

Fitzgerald has seen good volume, ranking 22nd in XFP per game (13.6), but he hasn’t been too productive this season, ranking just 38th in actual fantasy points per game (13.1). Still, I like his odds of finishing as a borderline WR2 this week. New Orleans was already giving up the second-most fantasy points per game to opposing slot wide receivers (21.3), and now they’ll be without starting slot cornerback P.J. Williams. Without him last week, Chicago scored 31.2 fantasy points when targeting wide receivers running routes from the slot, most on the week.

Howard is averaging just 8.2 fantasy points per game since a monster three-touchdown performance in Week 4 against the Packers. If you’ve been chasing that game ever since, it’s time to give up, and especially this week, as road underdogs against a stout Buffalo run defense.

Shepard has historically struggled when running routes on the outside, which is where he’ll play now that Golden Tate is back on the field. That also means he’s especially likely to struggle this week, in his first game back following a concussion, up against top shadow cornerback Darius Slay.

Since Bill Callahan took over as interim head coach two weeks ago, Peterson totals 45 touches and 217 yards. That's the good news. The bad news is, the Redskins are 15.5-point underdogs (most) with a 13.25 implied total (worst) against a Vikings defense that is giving up the fourth-fewest rushing fantasy points per game to opposing running backs. Peterson is just a borderline-RB3 this week. 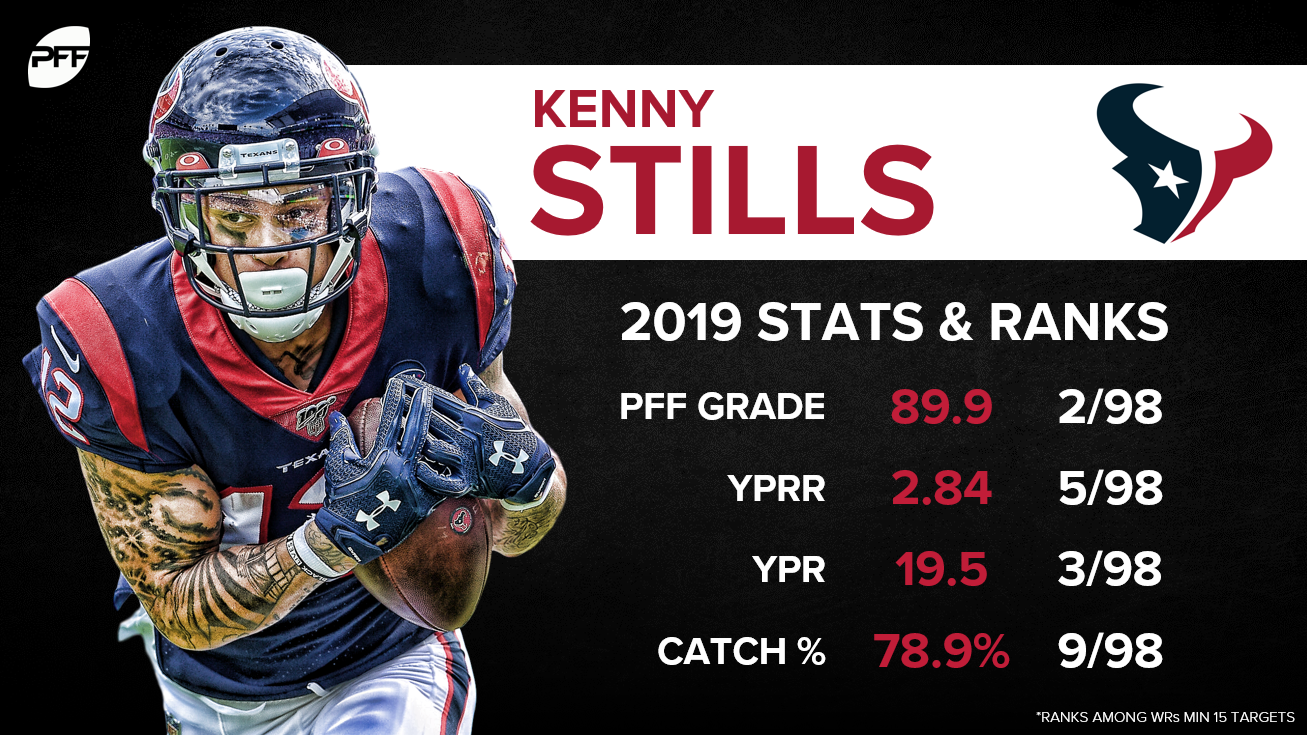 Among 98 receivers with at least 15 targets, Stills ranks second in PFF grade (89.9) and fifth in yards per route run (2.84). With just a 37% route share, Stills is averaging 3.8 targets and 10.1 fantasy points per game. Implied by this is that with a 100% route share (what he saw last week after Will Fuller went down with an injury), Stills would be averaging 27.3 fantasy points per game. Of course, he probably won’t hit that number this week, but he does have a top matchup, and … you get the point. Without Fuller in the lineup, Stills takes over as the team’s top deep threat and No. 2 receiver. 78% of his yards have come on targets thrown 15 or more yards down the field, and Oakland leads all defenses in fantasy points per game allowed on all such throws (27.7, 77% more than the league average rate). This one just feels like basic math — boldly, I have Stills ranked as a borderline WR2.

Tannehill impressed in his first start of the season, scoring 20.2 fantasy points and recording an 83.2 PFF passing grade (fifth-best on the week) against the Chargers. That’s enough for me to view him as a borderline QB1 this week, in an even better matchup against a Tampa Bay defense that ranks second-worst in schedule-adjusted fantasy points per game allowed to opposing QBs. He’s a top streaming option of the week.

Cook has no doubt disappointed those who drafted him, but he has scored in back-to-back games played and it sounds like he will get Drew Brees back this week. That would be perfect timing, against the league’s top tight end funnel defense. Arizona has given up the most fantasy points to opposing tight ends, and by a landslide (52.1 fantasy points more than the next-closest team). Especially with Patrick Peterson back (likely shadowing Michael Thomas for almost the whole game), expect the Saints to try and exploit this matchup.

Metcalf hasn’t done much to inspire confidence, but I like him as a flex-play this week. He isn’t just Seattle’s primary red-zone threat in a post-Will Dissly world, he quietly leads the league in end-zone targets (nine). This alone means his odds are pretty good of scoring a touchdown this week, in a game Seattle is expected to score 28.0 points. The matchup is also near-ideal. Atlanta has given up the most fantasy points per target (2.73) and the second-most fantasy points per game (14.0) to wide receivers aligned to the left, which is where Metcalf runs 56% of his routes.