Hello, and welcome to Week 8 of the Expected Fantasy Points Report. If you’re unfamiliar with expected fantasy points, you can read this in-depth explanation from the offseason. You can also read more about expected touchdowns.

Through seven weeks of action, here are the top-25 players in expected fantasy points per game: 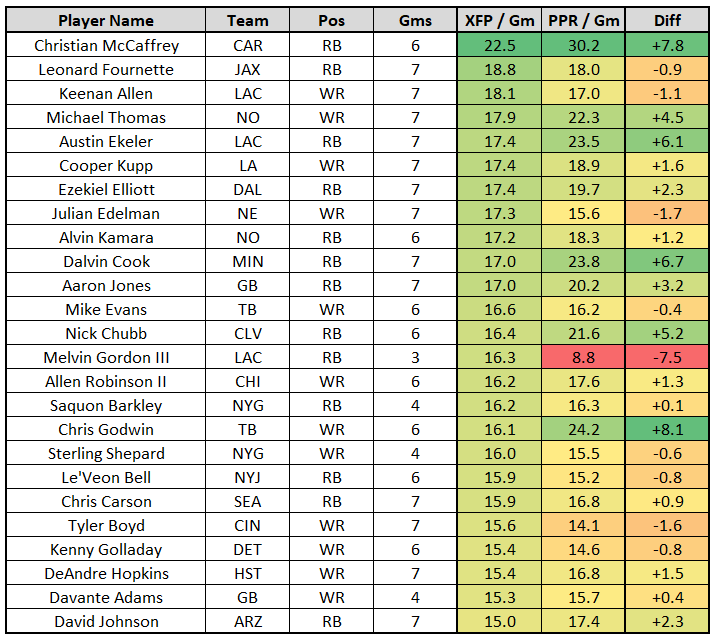 Since returning from his holdout, Gordon has seen good volume serving as the team’s early-down workhorse and goal-line back. Over the last three weeks, he’s seen 73% of Los Angeles’ rushing attempts and 75% of the team’s running back opportunities inside the 5-yard line. To better quantify it, he ranks 10th among all running backs in XFP per game over this span (16.3). Unfortunately, he’s been woefully inefficient on that volume, ranking just 40th in actual fantasy points per game (8.8). 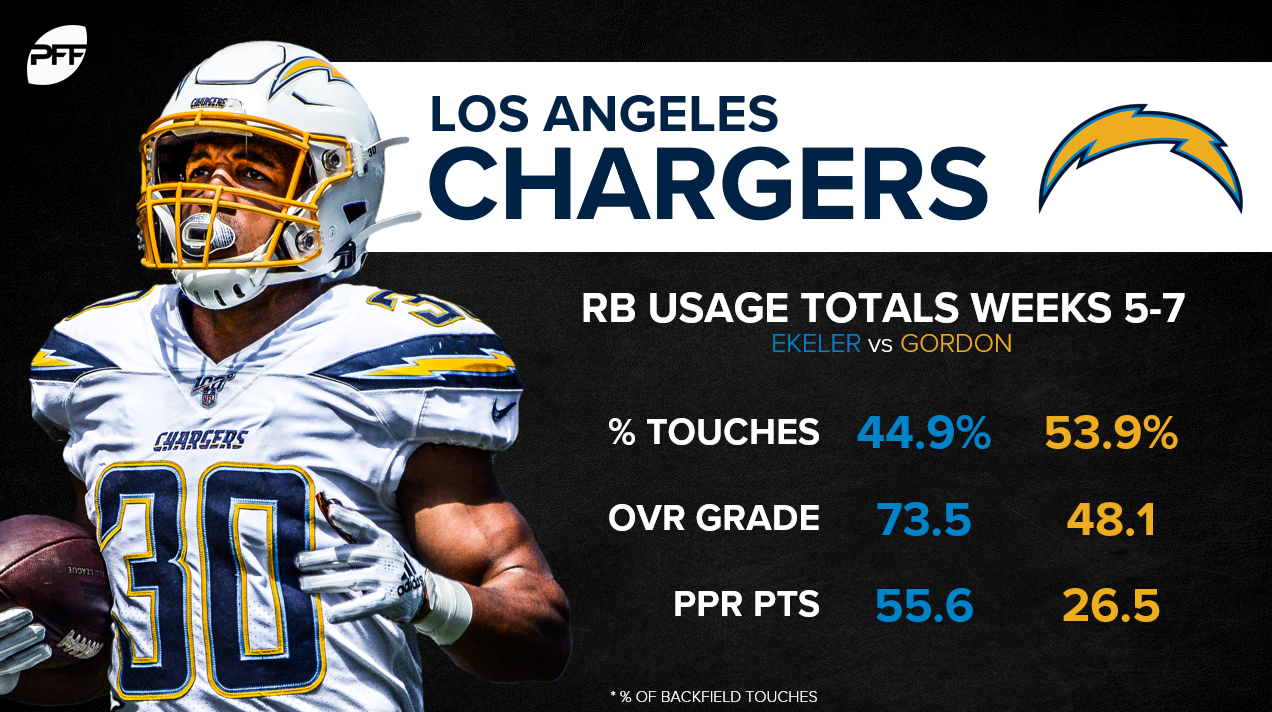 Gordon has no doubt been disastrous, but, at least, he is due for a positive regression, so long as volume doesn’t decline. Gordon has gotten extremely unlucky in the touchdown department, scoring a league-worst 0.80 touchdowns per game below his expectation. If he were perfectly average in this department, we should expect him to score about 4.8 more fantasy points per game — enough to rank as a mid-range RB2 for fantasy.

The bad news is, we probably should be expecting a volume decline. Gordon was one of the league’s most efficient running backs last year, but, by almost every measure, Ekeler was more efficient. That’s only been even more exaggerated this year. For instance, of 47 qualifying running backs, Ekeler ranks fourth-best in PFF grade, while Gordon ranks 47th. Gordon is also fantasy football’s least efficient player, scoring 7.5 fantasy points per game below his expectation, while Ekeler ranks fifth-best by the same metric (+6.1).

In other words, Ekeler probably should start seeing more volume than Gordon. He’s already close — ranking 16th in XFP per game (15.7) and 11th in actual fantasy points per game (18.5) since Gordon’s return. We already know Ekeler’s upside should he be granted a bell cow role (whether due to merit, or a Gordon injury or trade) — through the first five weeks of the season, he ranked second among all players in fantasy points per game (26.7). So, depending on whether Gordon improves or Los Angeles’ coaching staff comes to their senses, Ekeler could be worth anywhere between a high-end RB2 and a top-five running back the rest of the season. In either case that’s probably higher than most would value him, making him a top buy-low candidate.