With another week of action behind us, and some more fresh stats to analyze, I’m here to help you with your toughest fantasy football start/sit decisions for Week 5 of the NFL season.

Despite however little you may have paid to acquire him, Boyd has everything working in his favor as a must-start (for even shallow leagues) this week: good volume, good production, and a good matchup. Over the past three weeks, among wide receivers, Boyd ranks eighth in targets and fifth in fantasy points. This week he draws a Miami defense that has surrendered the 11th-most fantasy points per game to opposing slot wide receivers. While that doesn’t seem other-worldly, it is the best place to attack Miami’s secondary, and especially with Tyler Eifert out and A.J. Green likely to be shadowed by Xavien Howard (who shut down Amari Cooper in Week 3).

Though Landry ranks as only a fringe WR2 in terms of production, he’s seeing mid-range WR1 volume. As I outlined here, he’s my top positive regression candidate heading into the week and this might be your last chance to buy-low if you don’t already own him. If you do, he’s an easy “start” up against a Ravens defense that has surrendered the fourth-most fantasy points per game to opposing slot wide receivers.

New England’s wide receivers have struggled to start the year, with Phillip Dorsett averaging only 41.3 yards per game and Chris Hogan averaging just 27.3. Now, with Rob Gronkowski’s status up in the air for Thursday night’s game, New England is in desperate need of a reliable and able-bodied receiver. And that’s exactly what they’ll be getting from Edelman, who is fully healthy and averaged 17.3 fantasy points per game across his last 10 games.

Conner was held under 20 rushing yards in two of his last three games. That’s the bad news. The good news is that he’s seen between five and seven targets in every game he’s played and Atlanta is easily the league’s most susceptible pass defense to opposing running backs and have been for years. At home, with the highest implied point total of the week (30.5), he’s an easy must-start despite the disappointing production in recent weeks.

Davis is seeing high-end WR1 volume but is still a risky start this week in shadow coverage against Tre’Davious White. White is our 18th-highest-graded cornerback and, over the past two seasons, ranks 11th-best of 105 qualifying cornerbacks in fantasy points allowed per route in coverage. 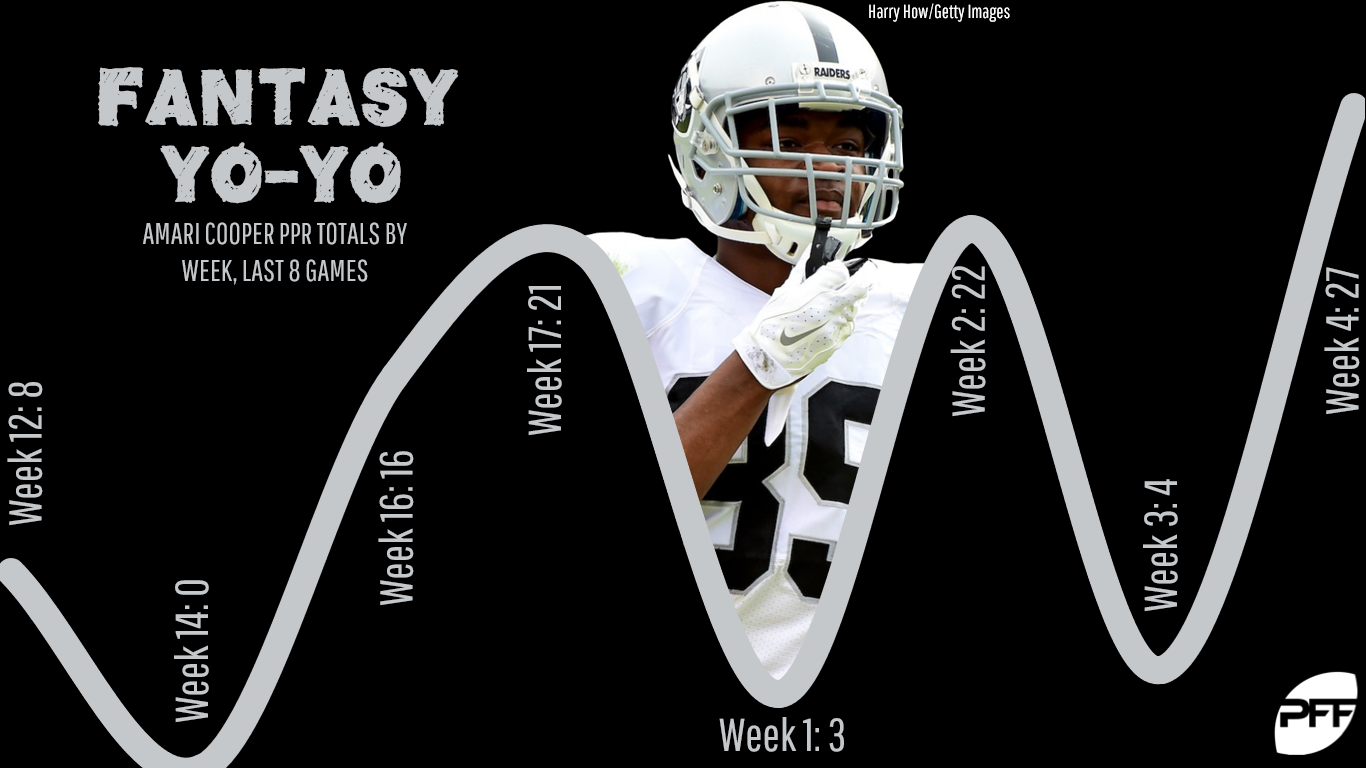 Last year Cooper was our single most inconsistent player and that trend has continued this year. Cooper has two games with more than 100 yards and two games under 20 yards. For the league’s most boom-or-bust wide receiver, I’m predicting a “bust” game this week. He’ll be in shadow coverage against Casey Hayward, one of the league’s top shadow cornerbacks and our highest-graded cornerback from a season ago.

Funchess too is a risky start in shadow coverage against Janoris Jenkins, who, over the last two weeks, shadowed and held DeAndre Hopkins and Michael Thomas to their lowest fantasy point outings of the season.

Finishing off our theme of wide receivers with good volume but in bad matchups, Enunwa projects to run over two-thirds of his routes against Chris Harris Jr. Harris has ranked as one of our five highest-graded cornerbacks in three of the last four seasons. If Enunwa couldn’t get it going the last two weeks, it’s not going to happen in Week 5.

Yeldon averages 12.3 carries per game, 4.5 targets per game, and 15.8 fantasy points per game. That’s despite Leonard Fournette still playing in a combined four quarters in Weeks 1 and 4 and Yeldon playing hurt in Weeks 2 and 3. For comparison, Corey Grant averages only 3.0 carries and 3.3 targets per game. In a dream matchup, with Fournette confirmed out, Yeldon is a no-brainer “start” in most leagues. The Chiefs are giving up the most fantasy points per game to running backs and rank third-worst in yards per carry allowed (5.54) while also giving up the most receiving yards to enemy running backs (385).

After facing four of the best matchups a tight end could have, Cook gets his first tough matchup of the season this week against the Chargers. Los Angeles gave up 24.5 fantasy points to George Kittle in Week 4 but had ranked as one of the toughest tight end matchups across their prior 20 games. In either case, he’s still a strong start this week given terrific volume and a multitude of injuries to the tight end position. Cook ranks second at the position in targets per game (8.5) and first in expected touchdowns per game (0.70).

Wentz shook off the last of his rust and returned to QB1 status in Week 4 against the Titans. I’m expecting another big game from him this week against a Vikings defense that ranks worst in schedule-adjusted fantasy points per game to opposing quarterbacks. They also rank fourth-worst in opposing passer rating (106.7) and fifth-worst in fantasy points per dropback (0.66) but have allowed just one rushing touchdown to opposing running backs across their last eight games.

As I alluded to here, with Rex Burkhead and Jeremy Hill out of the picture, Michel’s Week 4 usage was reminiscent of a 2016 LeGarrette Blount. He totaled 25 carries, all six of the team’s red-zone carries, but ran only three routes. Like Blount was, Michel is going to be boom-or-bust, a better option in standard scoring leagues, and heavily reliant on positive game-script. Luckily for him, he should have plenty of positive game-script this week as 10-point home favorites against the Colts. Oh, and across the last four games the Patriots faced Andrew Luck and the Colts, New England’s leading rusher (Jonas Gray once, Blount three times) averages a whopping 35.2 fantasy points per game.

With Devonta Freeman back at practice, this pushes Coleman back to only high-end RB4 status. Over the past two seasons, in games Freeman started and finished, Coleman averages just 9.7 fantasy points per game.

Cook saw zero touches in the second half of last week's game, is self-assessed to be less than 100%, did not practice on Wednesday, and has the toughest matchup a running back can get (against the Eagles). No thanks.

Over the past two weeks, Drake averages 5.5 touches and 13.0 total yards per game. Yeah, that’s another easy fade.

On Sunday, Adam Schefter reported Fitzgerald was reportedly “nowhere near 100%” despite playing. It was obvious to anyone watching the game, or checking the box score to find 65 total yards on 12 targets over the past three weeks. He’s not someone you can trust this week.

Jones, in his second game back from suspension, led the team in touches last week. Still, the number was low at 12 – just one ahead of Jamaal Williams. The concern with Jones is low usage but he’s certainly deserving of more. He averages 5.66 yards per carry for his career, while Williams averages 3.59. He’s forced eight missed tackles on 17 attempts this year, while Williams has forced zero on 47. Although volume is still a concern, the matchup is excellent. Detroit ranks worst in yards per carry allowed (6.1) and second-worst in rushing fantasy points per game allowed to opposing running backs. Especially with Aaron Rodgers at less than 100% and all of Davante Adams, Geronimo Allison, Randall Cobb, and Jimmy Graham listed on the Wednesday practice report, it makes sense to go a little more run-heavy in this contest.

Over the past two seasons, when Leonard Fournette has been inactive, Bortles has averaged 4.8 more fantasy points per game, 62.9 more passing yards per game, and 2.7 more red zone attempts per game. Over his last 10 games, Bortles actually leads all quarterbacks in fantasy points. He also has an ideal matchup this week, against a Kansas City defense that ranks second-worst in both total passing yards allowed and points allowed per drive (3.03).

Coutee recorded 11 receptions in his first career game, or the second-most by any player in their NFL debut all time. In total he saw 15 targets and two carries, while recording 109 receiving yards. Of course, he benefited from Will Fuller exiting the game one-third of the way through with an injury, but still, this sort of usage is hard to ignore. In a neutral matchup this week, Coutee is a decent flex play in deeper leagues if Fuller is active, and an excellent one if Fuller is out.

Breida was banged up heading into last week’s game and then re-injured his shoulder during the game which caused him to miss some time – so I wouldn’t read too much into his Week 4 usage. If he’s good to go this week (he practiced on Wednesday), he’s well worth a start against an Arizona defense that is surrendering the second-most fantasy points per game to opposing running backs.

Rashaad Penny has seen just 12 total touches over the past two weeks. Two weeks ago, Chris Carson saw 34 touches and totaled 124 total yards of offense but missed Week 4 due to injury. In his absence, Mike Davis was even more effective, totaling 124 yards of offense on just 25 touches. On Monday, Pete Carroll said this earned Davis a role in the offense moving forward, despite the return of Carson. I’m not getting cute with a three-way running back committee this week, as 7.0-point underdogs against a Rams defense ranking second-best in schedule adjusted fantasy points allowed to opposing running backs.

Mayfield will forever be one of “my guys,” but he’s too risky to start this week. The Ravens rank first in fantasy points allowed per dropback and first in opposing passer rating (69.1).

Gates has run a route on just 42% of Philip Rivers’ dropbacks this year. That ranks 34th among tight ends, and his 12 targets ranks 26th. He’s not just a “sit,” he’s droppable.

This season, Hogan is averaging one target every 10.5 routes, which ranks fourth-worst of 71 qualifying wide receivers. With Julian Edelman returning and Josh Gordon nearing full health, I don’t see that improving any time soon. Even with Rob Gronkowski questionable, and the potential for more work near the end zone, he’s too risky to start unless desperate.