We’re back again with our look at some of the best start-and-sit options in fantasy football for Week 15 of the season. Hopefully I’ve been steering you in the right direction for the better part of your fantasy season. Good luck this week in what should be your league’s second round of the playoffs.

Here are my recommendations for Week 15. 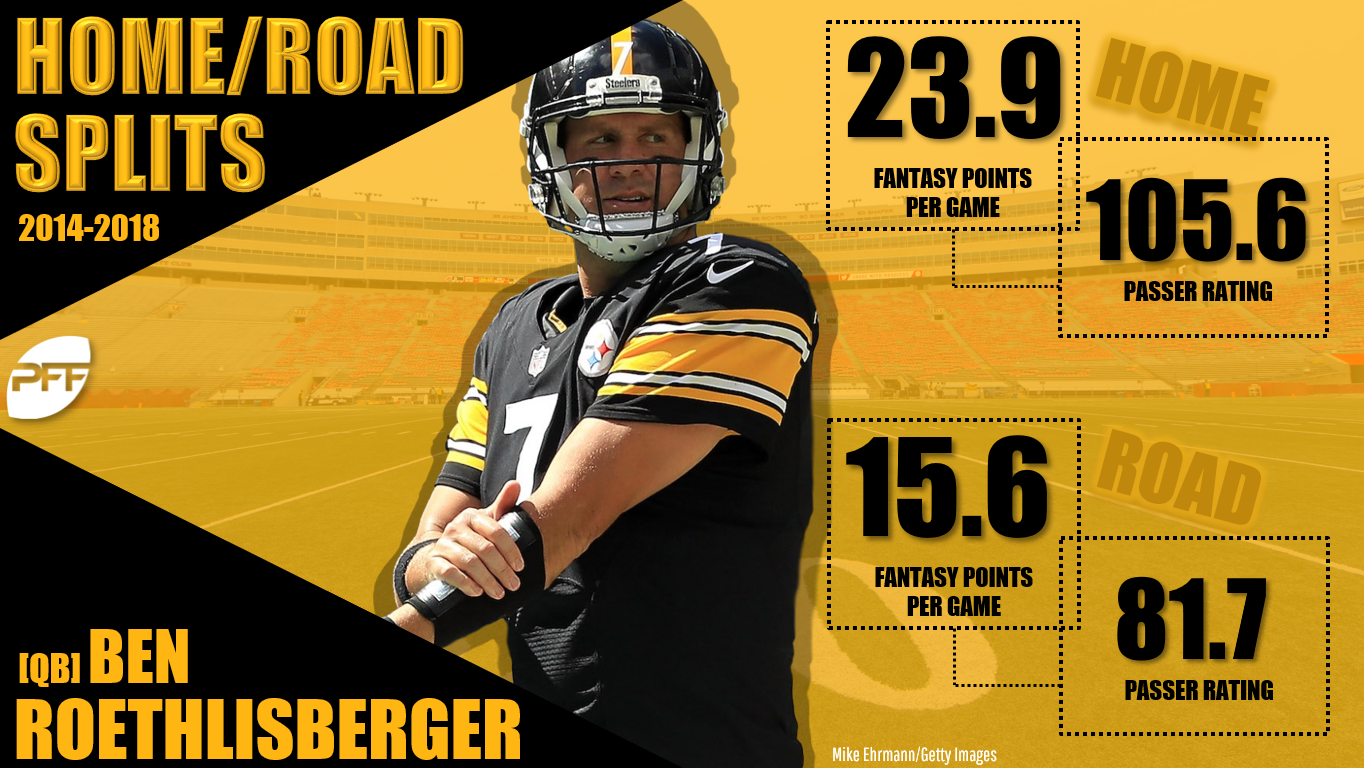 As I mentioned in the Week 15 Actual Opportunity Report, Fournette is borderline league-leading volume. I wrote:

“Fournette has been below average in efficiency this year but might be seeing the best volume of any player, if adjusted for lost quarters due to injury and suspension. Fournette has played in only 19 quarters this season (and only 16 full quarters). Across those 19 quarters he totals 97.0 expected fantasy points, or 20.4 expected points per four quarters. For perspective, Todd Gurley currently leads all players in expected fantasy points per game with 20.8.”

Volume should be great and efficiency should be better this week, with good gamescript, favored by seven points against a Washington defense that has, since Week 9, given up 30.5 fantasy points per game and 5.34 yards per carry to enemy backs.

In Week 14 Gronkowski posted his best game since Week 1, catching all eight of his targets for 107 yards and a score. It's too early to know for sure if the old Gronk is back, but he is worth starting this week as a mid-range TE1. Pittsburgh is giving up the fifth-most schedule-adjusted fantasy points per game to opposing tight ends, and Gronk averages 26.7 fantasy points per game across his last four games against the Steelers. 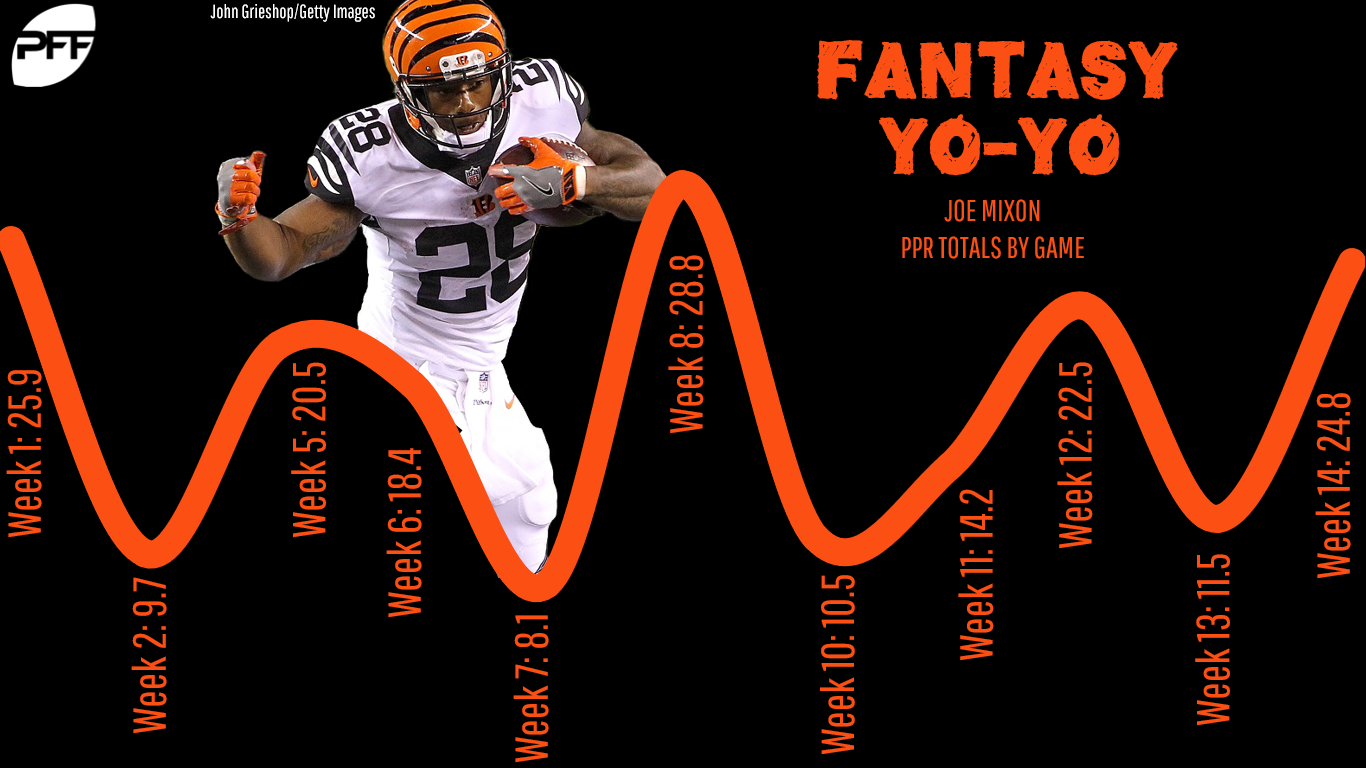 Mixon has been hit-or-miss all year, but is coming off a monster Week 14, where he saw 26 carries and six targets, good for 24.8 fantasy points. Cincinnati would be wise to lean heavy on Mixon again (and not backup quarterback Jeff Driskel). The Bengals are favored and up against an Oakland defense that ranks fourth-worst in yards allowed per carry (4.98) and fourth-worst in rushing fantasy points per game allowed to opposing running backs.

Golladay averaged 16.8 fantasy points per game Weeks 10-13, and then fell back to earth in Week 14. Last week, in shadow coverage against Patrick Peterson, he was held to just two catches and five yards. I'm expecting another disappointing outing this week, in shadow coverage against Tre’Davious White. White leads all 58 qualifying cornerbacks in fantasy points allowed per route in coverage, despite shadowing many of the league’s best wide receivers. 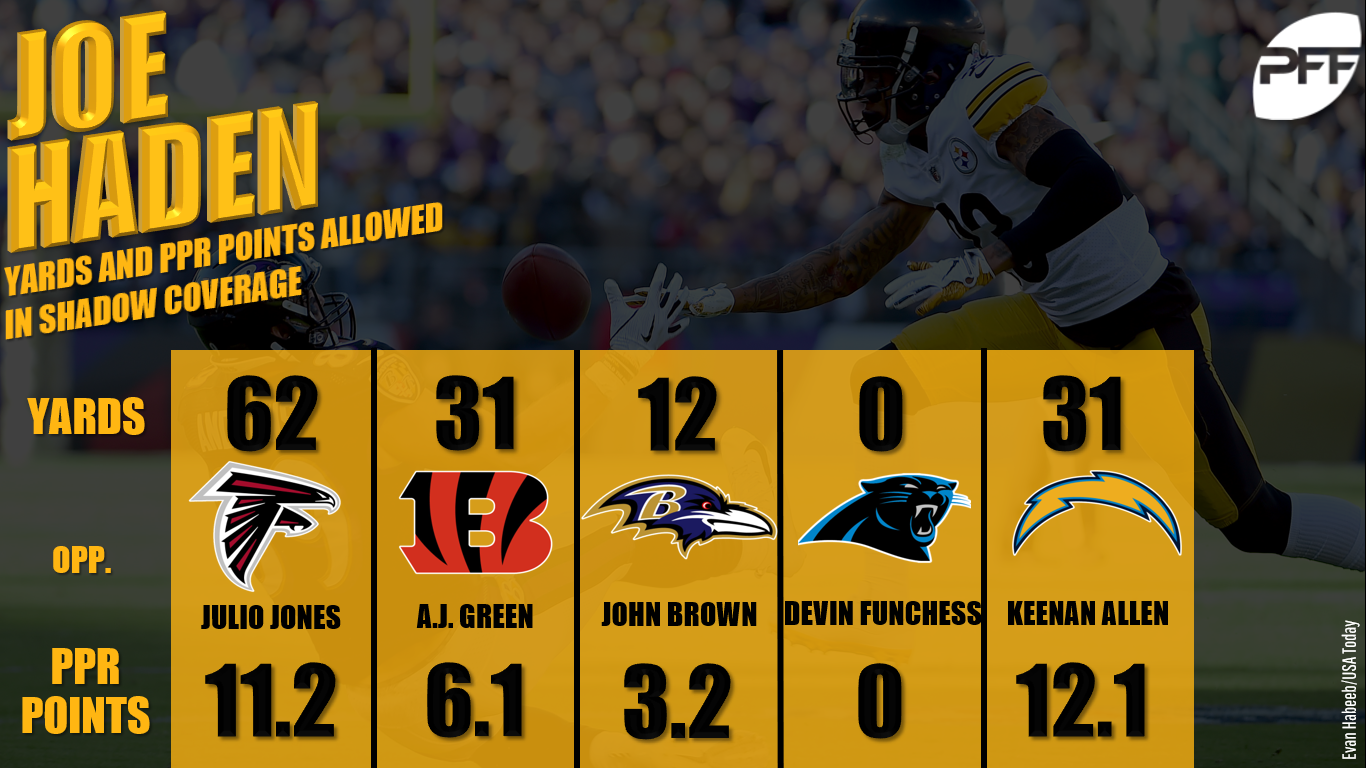 Gordon has 70 yards or a touchdown in each of his last five games but is a riskier start this week. We're expecting Joe Haden to shadow. Haden has shadowed in five games this year, holding the combination of Julio Jones, A. J. Green, John Brown, Devin Funchess, and Keenan Allen to just 136 yards and a score. Gordon gets bumped down to the low-end WR2-range this week.

White is still a “start” in a lot of leagues but is worth bumping down into the mid-RB2-range in PPR leagues. His role just isn’t as valuable as it was when Rex Burkhead was out of the lineup. Over the last five weeks he ranks just 28th in expected fantasy points per game (11.2).

Despite busting last week and a much tougher matchup coming this week (in Baltimore), Godwin should still be started as a mid-range WR2 if DeSean Jackson sits out again (likely). I wrote in this week’s Actual Opportunity report:

If Gordon plays, you’re of course left with no other option but to start him as a mid- to high-end RB1 – luckily, we’ll know on Thursday whether he’s playing. If he’s out, with Austin Ekeler confirmed out already, Jackson needs to be started as a high-end RB2. With Detrez Newsome (11 career snaps) the only other running back on the roster, Los Angeles will have little choice but to use Jackson as a do-it-all bell cow. He’s averaging 5.1 yards per carry (27 carries for 139 yards and a score) and has caught all five of his targets for 61 yards. This week, in a game with the highest over/under of the week, he draws a Kansas City defense giving up the second-most fantasy points per game to enemy running backs.

Wilson totaled 13.5 expected fantasy points in Week 14, which ranked only 20th at the position, but looks better in terms of market share. He played on 86% of the snaps and saw 85% of the team’s running back expected fantasy points. He’s a high-end RB2 this week if Breida is out again. If Breida plays, Wilson is better left on your bench, while Breida himself becomes a mid-range RB2. Breida ranks second-best in yards per carry (5.6) and is our 13th-highest-graded running back this year but has not seen a significant workload in any game this year. Though this might be injury-related, Breida’s exceeded 50% of the snaps just twice and maxed out at 63% in Week 4. Still, I like the matchup – Breida and Wilson combined to drop 191 yards on Seattle in Week 13, and Seattle ranks second-worst in schedule-adjusted fantasy points per game to opposing running over their last five games. 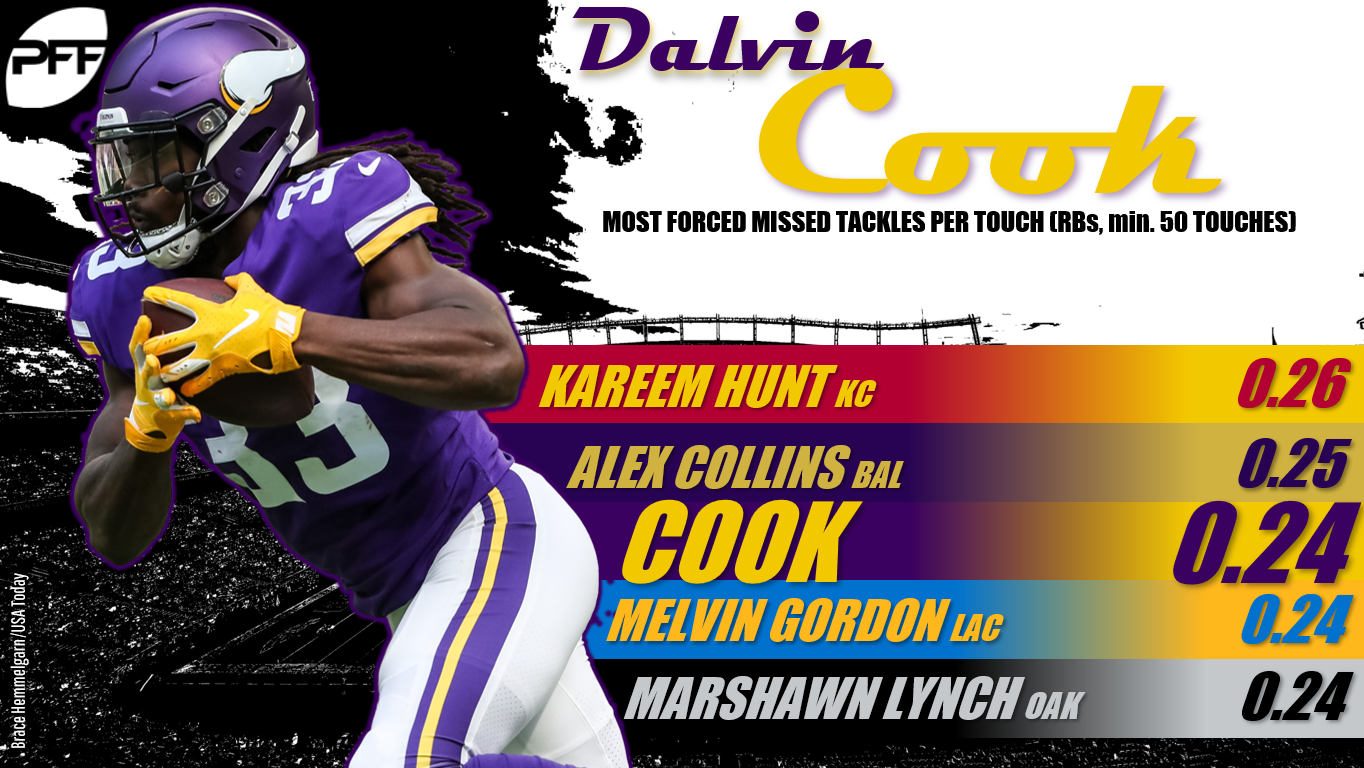 Despite battling through various injuries, Cook has played well this year, ranking third of 50 qualified running backs in missed tackles forced per touch (0.24). Now, he appears to be nearing full health, and volume has never been better. Over the past two weeks, Cook averages 19.4 expected fantasy points per game (sixth-best) while playing on 82% of the snaps and drawing 88% of the team’s running back expected fantasy points. There’s a concern this is mostly related to negative gamescript, and Latavius Murray is still a threat to vulture touchdowns, but Cook does have a good matchup this week. Miami is giving up the seventh-most fantasy points per game to opposing running backs.

Jones has seen good volume over the second half of the season, ranking 20th among wide receivers in targets since Week 6. However, he's done a poorer job of converting those targets into fantasy points, ranking just 33rd in fantasy points over this span. To make matters worse, this week, we’re projecting a shadow from Darius Slay. He’s our 29th-highest-graded cornerback this year, while Jones is just our 98th-highest-graded wide receiver.

Parker too is risky, as he would be in any week (he's exceeded 45 yards just once), but especially in Week 15 up against Xavier Rhodes in shadow coverage. In nine shadow games, and against some of the league’s best wide receivers, Rhodes is surrendering just 31.0 yards per game, and Davante Adams is the only receiver who has found the end zone against him.

Thomas had a monster game in Week 14 — catching nine of 11 targets for 77 yards. If this were any other opponent, I might be excited to write him up as a “start” for tight end streamers, but not this week against the Saints. The Saints have been the NFL’s toughest defense to tight ends for two straight seasons, leading the league in schedule-adjusted fantasy points per game allowed.

Much like with Justin Jackson if Melvin Gordon is out, I think the Chiefs have little recourse but to give Williams a heavy workload. Assuming Spencer Ware’s doubtful status becomes a full “out,” the only other running backs on the roster – Darrel Williams and Charcandrick West – have played a combined six snaps all year. Williams has scored 73% of his career fantasy points as a receiver, so he’ll be more valuable in PPR leagues where he should be started as a mid-range to low-end RB2. The Chargers are giving up the 14th-most fantasy points per game to opposing running backs, and the ninth-most to running backs through the air.

Although D.J. Moore has stolen the show in Carolina, this is not the week to sleep on Samuel if looking for a spot start from the wide receiver position. Samuel has seen at least eight targets and totaled 80-plus yards in back-to-back games. He's also found the end zone in five of his last six. This week he draws a Saints defense that is giving up the second-most fantasy points per game to right wide receivers (where Samuel runs 48% of his routes) and the most schedule-adjusted fantasy points per game to WR2s.

Fitzgerald has disappeared in recent weeks, and is hard to trust, but he did see nine targets last week. Heavy target-volume makes sense again this week with Christian Kirk out and Chad Williams questionable, as nine-point underdogs against the Falcons. Atlanta has historically struggled against slot wide receivers throughout the Dan Quinn era. In each of the past three seasons, they’ve ranked bottom-six in fantasy points per game to opposing wide receivers out of the slot, which is where Fitzgerald runs 76% of his routes.

Coutee is another slot wide receiver in a good matchup. He runs 70% of his routes from the slot, which is where the Jets are giving up the second-most fantasy points per game (25.1). He’ll be covered primarily by Buster Skrine (who grades out 102nd of 113 qualifying cornerbacks) and should see heavy target volume, as New York is much tougher to outside wide receivers (seventh-best). He’s currently listed as questionable, but we’ll know on Saturday whether or not he’ll play.

Martin is averaging 17.0 carries, 1.0 targets, and 12.0 fantasy points per game over his last two games. Granted, gamescript was better than typical, but it could be again this week, as “only” 2.5-point underdogs against the Jeff Driskel-led Bengals. The matchup is cushy too – the Bengals are giving up the most fantasy points per game to enemy running backs. He’s a high-end RB3 this week.