In PPR leagues last season, Todd Gurley was drafted (on average) as the 20th player off the board, while Dez Bryant typically went right after him at pick No. 21 overall.

Imagine you were stuck between these two players at your second-round pick last season. Getting this pick right very well could have been the difference between you winning or losing your league.

This is why I love the draft. Every seemingly minor decision could have massive ramifications on your success or failure as a team owner. While I love that aspect to drafting, this is also a fairly intimidating thought. How many of us had any level of confidence Gurley would more than double Bryant in fantasy points, despite playing in fewer games? This realization is also likely why I’ve spent the past three weeks obsessively debating my ranking of Ezekiel Elliott.

Prior to this article I had Elliott as my fifth overall player in PPR leagues. My fellow PFF rankers had him at seventh, sixth, ninth, fourth, and seventh overall – with an average ranking of 6.6. Was I too high on him? After much internal debate, I believe my fellow rankers were right, and I was too high on him. Don’t get me wrong, Elliott is a phenomenal pick, but fifth overall is likely a touch too high.

Among all 37 running backs to total at least 250 touches over the past two seasons, Elliott ranks top-five in both yards per carry (4.6) and yards per target (8.2). Over this same stretch, Elliott averages 21.1 fantasy points per game, a number bested only by David Johnson, Le'Veon Bell, Aaron Rodgers, and Antonio Brown.

So what is there to worry about?

Again, Elliott is great, but I’m pessimistic regarding his fantasy prospects due to one stat and one stat only – targets. Much like we are projecting a regression for Alvin Kamara, as outlined here, I believe Elliott takes a step back for similar reasons next season. Mainly, Elliott’s production has been too good compared to his volume-quality, and I suspect the value of his role actually declines next year.

Elliott feels like a lock to rank top-five in carries per game next year, for the third year in a row, but that might not be enough to justify a top-five overall ranking. Over the past decade, in PPR leagues, a target has been worth 2.64 times as many fantasy points as a carry for running backs. Running backs who fail to draw high target totals can still be successful for fantasy, but their ceiling is lower, they’re more prone to weekly variance, and are more dependent upon positive game script. That latter point might be an issue, with Vegas projecting Dallas to win only 53 percent of their games next year, though they’ve won 76 percent of the time Elliott has made an appearance.

It's really hard to be a PPR superstar at the RB position and not draw meaningful targets. Ezekiel Elliott has overcome the odds twice so far. Can he do it again? pic.twitter.com/tNXOMewTRe

This chart could be taken two different ways.

I’m leaning toward the latter based on two factors. 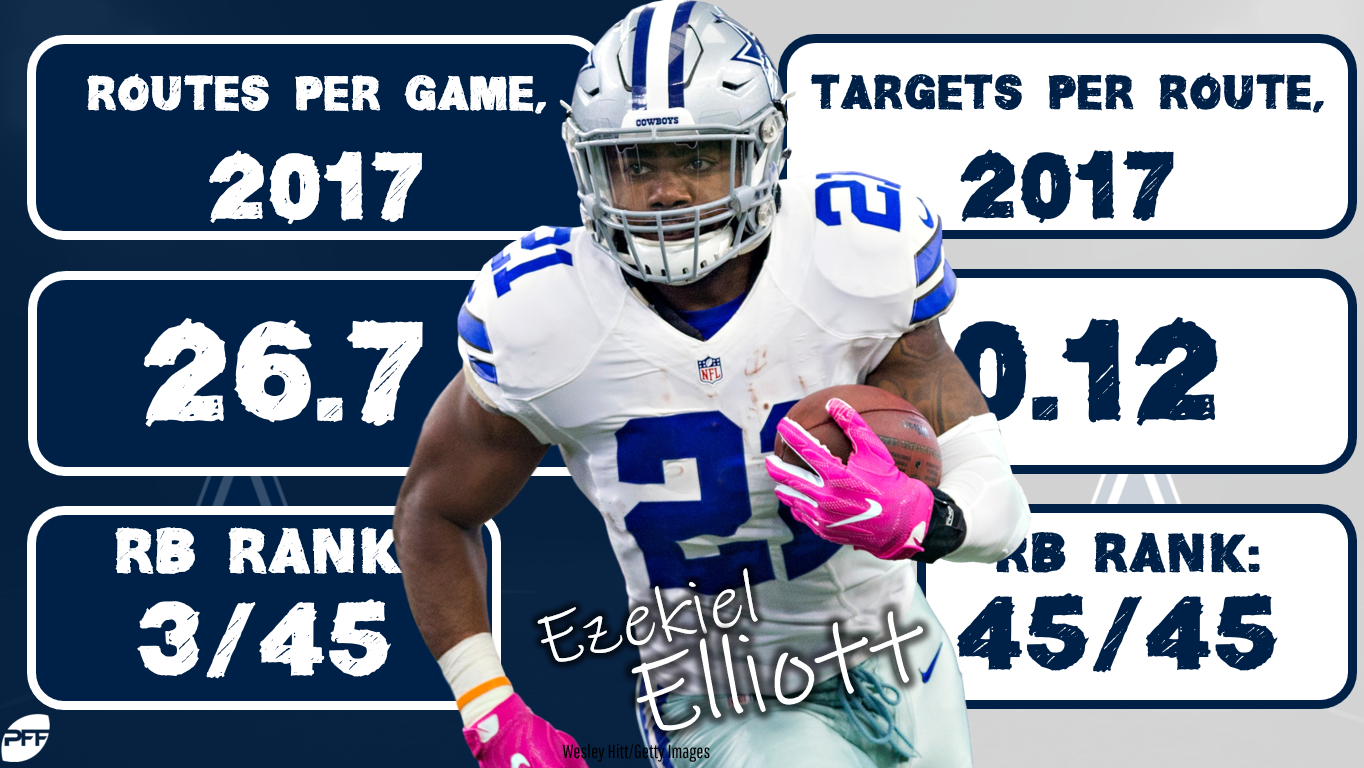 As we alluded to earlier, Elliott has been fantastic on a per-target basis throughout his career, ranking third of 37 qualifying running backs in yards per target over the past two seasons. On the surface level, this implies a reaction along the lines of, “Well, maybe these numbskulls should start targeting him more.” However, I’ve always been of the opinion that raw targets are a greater signifier of a player’s skills as a receiver than anything on a per-target basis. In this regard, I was heavily influenced by Adam Harstad’s cogent rants on the subject. Essentially, a quarterback targeting a receiver — due to trust, due to the fact that he’s open, or for whatever reason — is likely a sign that that player is a good receiver. The reverse — not being targeted — is likely true as well.

Secondly, and it feels really weird to type this, I’m actually worried about Tavon Austin. During the draft, Dallas traded a sixth-round pick to acquire Austin as their change-of-pace or pass-catching running back. After playing his first five seasons in the NFL as a wide receiver, perhaps he’ll be more productive as a running back. During the team’s Day 3 press conference during the draft, Jerry Jones said they want to get Austin the ball a “dozen to two dozen” times per game. While that’s highly unrealistic, I do think this implies Austin is a real threat to steal routes and targets away from Elliott.

Again, the data suggest Elliott has some untapped potential we need to factor into our analysis, but as it stands, I’m counting more negatives than positives with regard to this narrative. He’s also likely due for a natural gamescript- and efficiency-based regression if target volume doesn’t improve. I originally had Elliott ranked fourth in my non-PPR rankings and fifth in my PPR rankings. As of today, he remains fourth in my non-PPR rankings, but falls to eighth in PPR. It’s a minor change, and I think the right call, but hopefully one that doesn’t hurt me as much as someone ranking Bryant over Gurley last year (not me, I swear).

(Necessary caveat: I’ll be scouring all offseason reports from Dallas insiders hoping they’re projecting a target bump for Elliott this season. If that’s the case, I’ll gladly move Elliott back up my ranking.)