The best and worst fantasy football matchups of Week 14 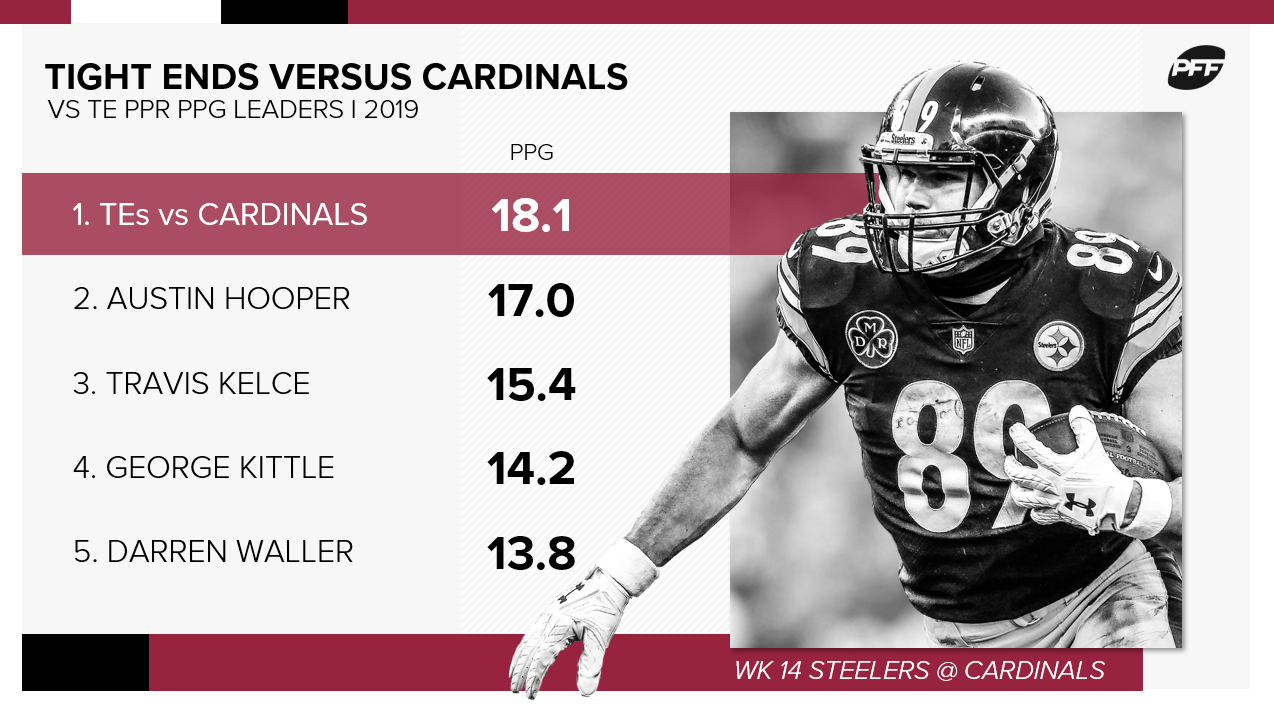 Vance McDonald, TE, Pittsburgh Steelers (@ ARZ): Why mess with what is working? McDonald has been a huge disappointment this year, but if there were ever a time for him to get things straightened out, it’s against a Cardinals defense that has been the ultimate tight end cheat code this year, allowing 18.1 PPR points per game to opponents’ No. 1 tight ends, an average that Scott Barrett noted in this week’s stats to know piece would be the best in the league if it were one guy. Bet on the matchup to outshine McDonald’s disappointment.

Kirk Cousins, QB, Minnesota Vikings (vs. DET): Cousins is fantasy’s QB9 on the season. Starting in Week 6, he’s QB4. And he’s doing it despite clearly his worst season as a rusher, with only 50 yards and 1 rushing touchdown. In other words, this is the best Cousins-as-a-passer we’ve ever seen, with a career-best PFF passing grade (85.8), passer rating (111.9), and yards per attempt (8.5). And now, with Dalvin Cook banged up, the Vikings would do well to take it easy on their star running back, and that means extra passing for Cousins against a Lions team that has been lit up by almost every quarterback they’ve faced this year.

Nick Chubb, RB, Cleveland Browns (vs. CIN): Chubb’s carry load has actually increased slightly since the reinstatement of Kareem Hunt, from 19.3 carries per game to 21.0. It’s passing-game work where’s lost usage, dropping from 3.8 targets per game to 2.3. This week, as 7.5-point favorites against a Bengals team allowing the seventh-most PPR points per game to opposing running backs and the fourth-most rushing yards to the position, the rushing is what matters.

D.J. Moore, WR, Carolina Panthers (@ ATL): Through Week 6, before the Carolina bye, Moore was a perfectly fine 20th in WR fantasy scoring, with 7.9 targets and 14.0 PPR points per game. You might not have been counting a championship, but you weren’t disappointed in the draft pick. Since the bye? Moore is WR4 in that stretch, with 10.5 targets and 19.2 PPR points per game, a dominant performance despite a quarterback who wouldn’t have a job most seasons. Now against a porous Atlanta defense, Moore’s an easy top-10 receiver.

Jack Doyle, TE, Indianapolis Colts (@ TB): If Eric Ebron hadn’t been on the team at all this year, Doyle would have been a top-10 tight end in preseason rankings (the same for Ebron if Doyle were gone). So the fact that Doyle had an eruption in Week 13 with Ebron now on IR (season-highs with 12 targets, 6 receptions, and 73 yards) shouldn’t have surprised anyone. The Buccaneers have allowed the fifth-most PPR points per game to tight ends this year, a number that has come down in recent weeks because they’ve faced Maxx Williams, Jaeden Graham, and Nick O’Leary. This is not a team that defends tight ends well.

Dak Prescott, QB, Dallas Cowboys (@ CHI): The next quarterback to put up 20-plus fantasy points against the Bears will be the first since Tom Brady in Week 7 … of last year. The Bears have been sneakily lights out against the quarterback position this year. Meanwhile, Prescott had a three-game stretch in Weeks 9-11 against the weak Giants, Vikings, and Lions pass defenses when he threw for 3 touchdowns in each game, but take those out and he’s averaged 1 TD pass a game since Week 2, including 2 in his last two games combined. Prescott maintains a high floor, but he has a low ceiling this week. 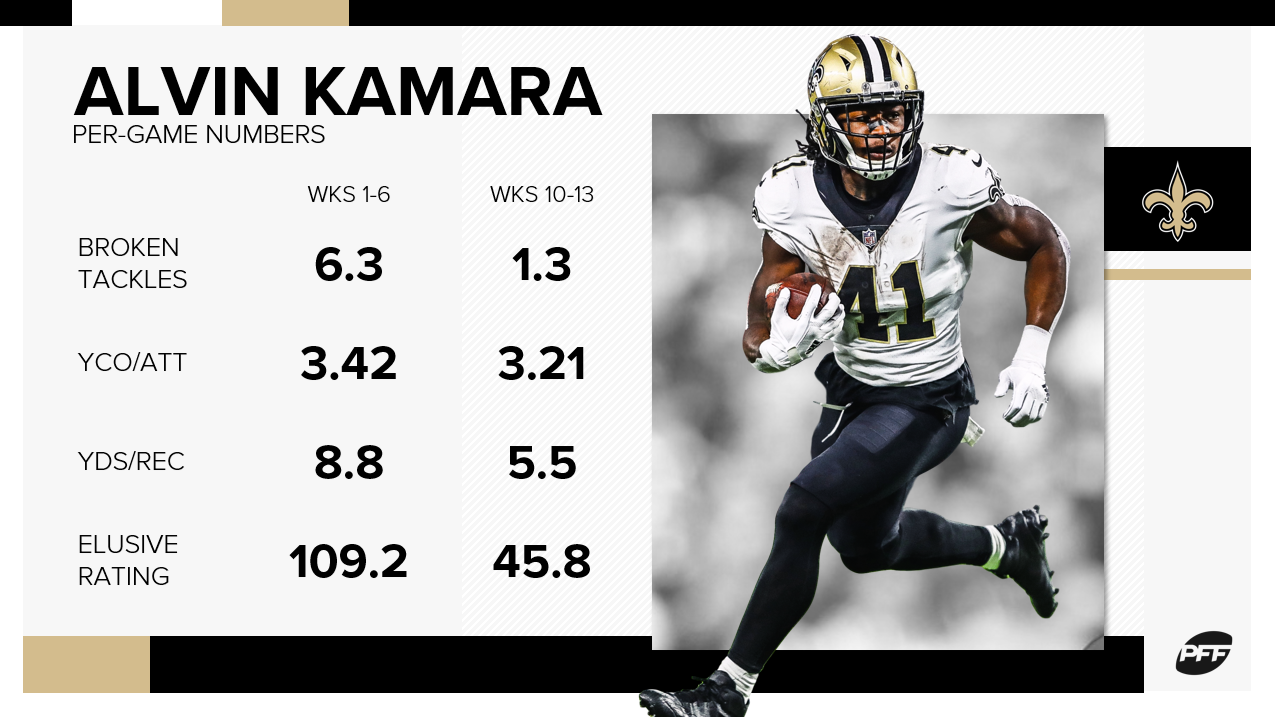 Alvin Kamara, RB, New Orleans Saints (vs. SF): Kamara was electric early in the season. He didn’t find the end zone much, but he forced an average of 6.3 missed tackles per game, averaged 8.8 yards per reception, and posted a 109.2 elusive rating through Week 6. Then he got hurt, missed Week 7-8, and came back after the team’s bye and has now been himself. He’s averaged 1.3 forced missed tackles per game, 5.5 yards per reception, and a 45.8 elusive rating. The touch load has been there, so Kamara isn’t going to disappear, but against a 49ers defense that has only allowed 3 touchdowns to running backs all year, this could be a down one.

D.J. Chark, WR, Jacksonville Jaguars (vs. LAC): Our WR/CB matchup chart predicts a shadow for Chark in Week 14 by Casey Hayward. Hayward struggled against Courtland Sutton last week, but he’s shadowed four other times this year and held Marvin Jones, DeAndre Hopkins, Sutton (in the other game) and Corey Davis to a combined 5 receptions for 66 yards and 0 touchdowns. Gardner Minshew is back as the starter, and he might be better than Nick Foles, but he lost his grip on the starting job once for a reason. I think Chark’s best days of the year are behind him.

Travis Kelce, TE, Kansas City Chiefs (@ NE): Kelce is in line to finish as fantasy’s No. 1 tight end for the fourth straight year, an incredible run of success. There are some signs that he’s a little worse than his peak, though. He has his lowest PFF receiving grade of the stretch at 85.3 and his lowest yards after the catch per reception at 4.4. He’s had at least three 10-target games in each of the last three years, but he only has one this year (and that was exactly 10 targets, back in Week 5). He’s had at least four 100-yard games each of those three years, but he has only one this year (107 in Week 2). None of that is damning, but it does concern you about his weekly ceiling, especially this week against a Patriots defense that might be performing below its peak but is still elite.