It is really hard to beat Vegas. In NFL gambling circles, you’re considered either incredibly lucky or tremendously bright if you manage to win on even 55% of your bets (just barely better than a coin flip) over a large enough sample. With millions of dollars at stake, Vegas is incentivized to make the sharpest lines possible, and for the most part, they’re extremely successful at doing so. For this reason, each offseason, I try to spend some time looking at betting lines and trying to determine what these lines might mean for fantasy.

Today, we’re going to look at DraftKings Sportsbook’s 2019 projected win totals in contrast to that team’s 2018 win totals. We are then going to try to determine what this might mean for the top fantasy players on the teams projected to improve the most or least. Our most recent article looking at the most and least gamescript-dependent players in fantasy will help aid in our analysis. 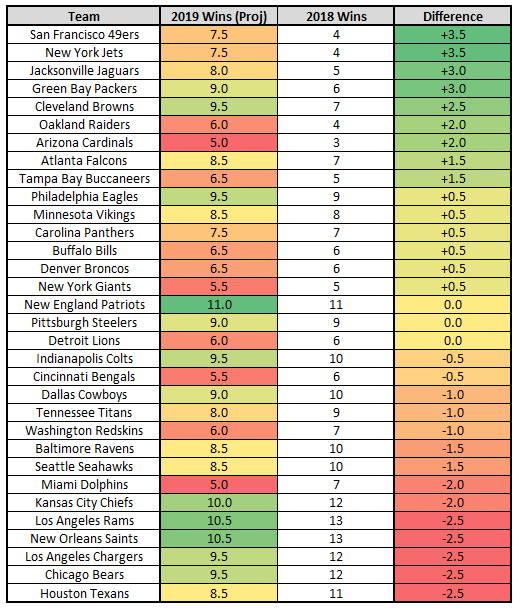 In our last article, we looked at the fantasy splits of various players by whether their team was trailing or leading. We noted that running backs tended to score a higher percentage of their fantasy points when leading, while the opposite was true for quarterbacks, wide receivers, and tight ends.

Over the past three seasons, winning teams average 18.5 fantasy points per game at the quarterback position. Losing teams average 14.2. However, over the same span, teams trailed on 46% of their offensive plays, but 50% of all quarterback scoring occurred while trailing. Teams led on 34% of their offensive plays, but only 31% of quarterback scoring occurred while leading. These splits were nearly identical for wide receivers and tight ends.

This may seem confusing, but really, this has to do with a few different factors:

So, while winning teams score more fantasy points at the quarterback position on average, it can also be true that most quarterbacks are more productive when trailing. Wide receivers and tight ends also average more fantasy points when victorious and are more productive when trailing. This is not true for most running backs, however.

With these factors in mind, here are my top fantasy takeaways for the teams projected to climb or fall the most in wins next season:

The 49ers are projected to make the biggest jump in 2019, and that shouldn’t be a surprise to anyone. The team was projected to win 8.5 games last season, and though it underperformed, it’s easy to see why. Jimmy Garoppolo — the sixth-highest-paid quarterback in the NFL — played in just three games before suffering a season-ending ACL injury. With his healthy return, the entire offense should be improved. Though, it’s also worth noting, Garoppolo hasn’t been much better than Nick Mullens throughout his San Francisco tenure. Further, across George Kittle’s career, zero of his seven highest-scoring weeks came with Garoppolo under center. 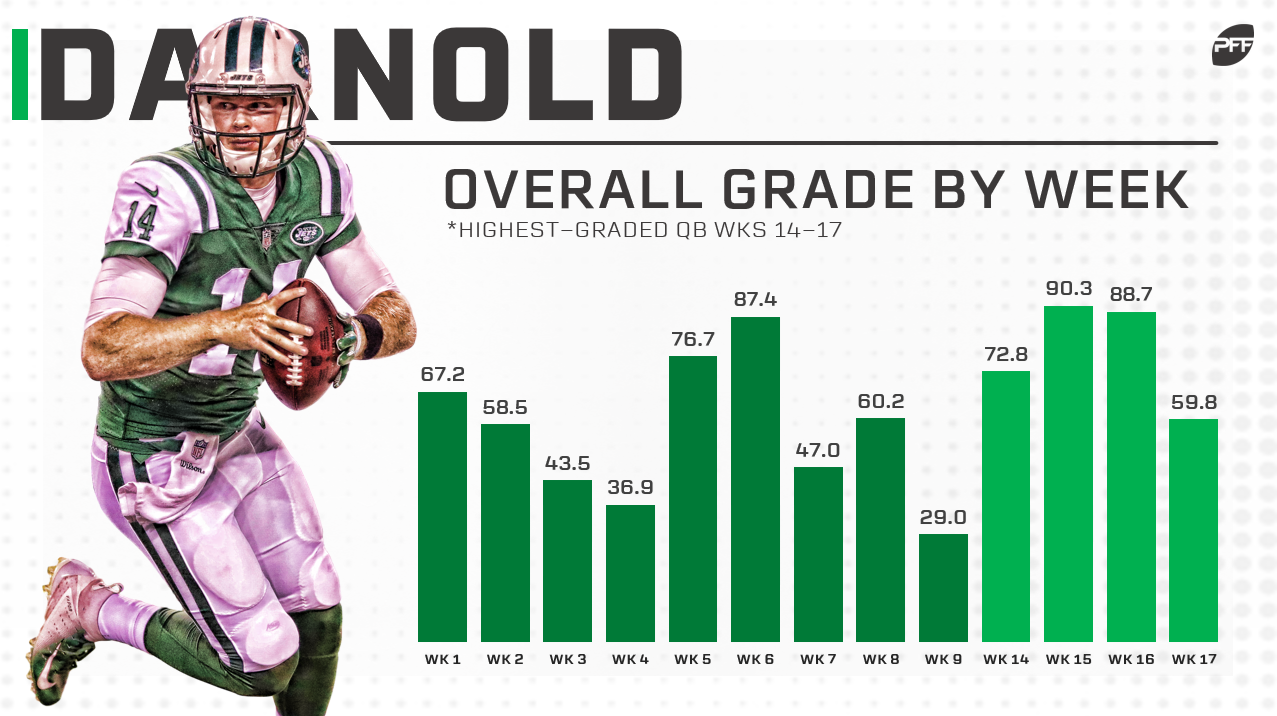 The Jets are also projected to win 3.5 more games in 2019, and that also likely has to with improved quarterback play. Sam Darnold’s full-season numbers are underwhelming but he played much better towards the tail end of last season, ranking second in PFF passing grade over the final four weeks of the season. If Vegas is right on the Jets, this should be good news for the fantasy potential of Darnold and his pass-catchers. The improved gamescript won’t mean much to Le’Veon Bell, however, because he’s a bell cow running back. He’ll have more scoring opportunities in victories, but won’t necessarily be negatively impacted in losses, making up for a lack of scoring opportunities with an increase in target-volume.

The Jaguars are projected to win 9.0 games in 2019 after winning just five in 2018. This could be due to a potential upgrade from Blake Bortles to Nick Foles, natural regression (they won 10 games in 2017), or (less likely) Leonard Fournette returning to full health. Improved gamescript should do wonders for Fournette, who averaged 20.6 carries per game (third-most) in 2017 but saw that number fall to just 16.6 in 2018.

The Packers are projected to win 9.0 games in 2019, which is a win total they’ve exceeded in seven of their past 10 seasons. The biggest beneficiary should be their running back, Aaron Jones, who was one of the league’s most gamescript-sensitive running backs last season. Although I argued he might be a bell cow in 2019 – if he’s not, improved gamescript should mean more time on the field and more scoring opportunities.

The Cardinals are projected to win 1.5 more games in 2019, after having a phenomenal draft that included rookie QB Kyler Murray, and because, well, it’s hard to imagine them failing to improve on a historically woeful 2018 season. Arizona’s offense should improve dramatically next season under Kliff Kingsbury, who runs his offense at a blazing pace (Arizona ran the second-fewest plays last season, despite spending the most time trailing in games). Murray has legitimate QB1-upside in Year 1, all of Arizona’s young (and extremely old) receivers are enticing at ADP, and David Johnson is undoubtedly the biggest winner on the team.

Likely due, at least partially, to Tyreek Hill’s looming suspension, the Chiefs are projected to win 2.0 fewer games in 2019. While it’s true that quarterbacks typically score more fantasy points in victories, Andy Reid’s starting quarterbacks have been dramatically more productive when trailing than leading in each of the past three seasons. Patrick Mahomes is due for a statistical regression, but the more points his opponents put on the board, the better for his fantasy potential. The loss of Hill to the offense certainly hurts Mahomes, but also makes Travis Kelce well worth a first-round pick. An increase in negative gamescript should also help Damien Williams. As a best-case scenario, he’s Kansas City’s bell cow running back, and as a worst-case scenario he should still be the team’s primary pass-catching back.

The Bears are one of nine teams projected to lose 1.5 or more games in 2019. You’ll notice eight of those nine teams had double-digit wins in 2018. So the Bears’ ranking here probably has more to do with how hard it is to project a team to win 10 or more games rather than the overall strength of their roster. In any case, this would be good news for Tarik Cohen, one of our most gamescript-sensitive running backs in 2018, but only if we believe Matt Nagy will continue to use his running backs in a committee, which I do not. 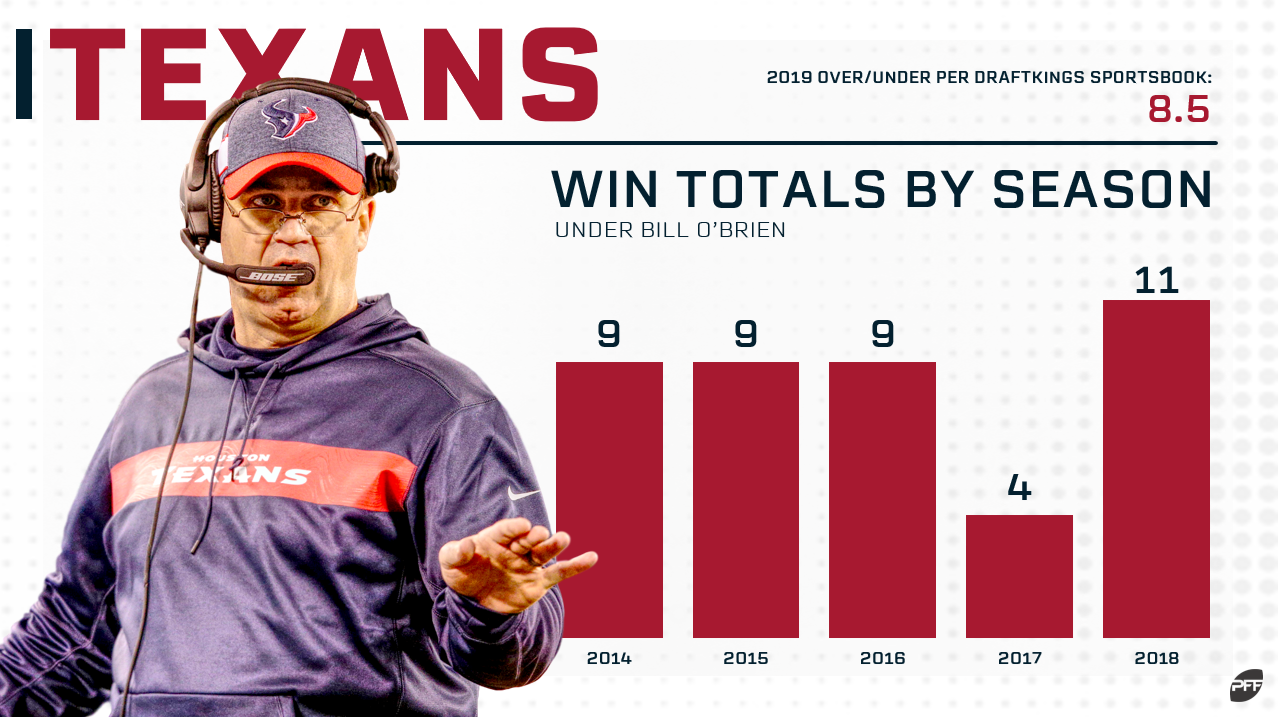 The Texans are projected to win only 8.5 games in 2019, which is notable (more notable than for the Bears) considering they’ve exceeded that win-total in four of Bill O’Brien’s five seasons as head coach. If Vegas is correct, this might help the pass-catchers in terms of volume, but severely cap Lamar Miller’s fantasy potential. Miller ranks fourth in rushing attempts (716) but just 30th in targets (119) since joining the team in 2016.