The 2018 QBs through the lens of depth-adjusted completion percentage

Unlike with running backs, wide receivers, and tight ends, efficiency matters far more for quarterbacks in fantasy football than volume. I explained here, “Since 2007, raw pass attempts had a 0.41 correlation to fantasy points – much lower than the correlation between passer rating and fantasy points (0.73).” Completion percentage is factored into the passer rating formula and is one of the more misunderstood and misused metrics in football, so I wanted to spend some time with it here.

Completion percentage typically has far more to do with a quarterback’s usage (timidity) than their efficiency (accuracy). As you can see in the below chart, there’s an exceptionally high correlation between depth of target and completion percentage: 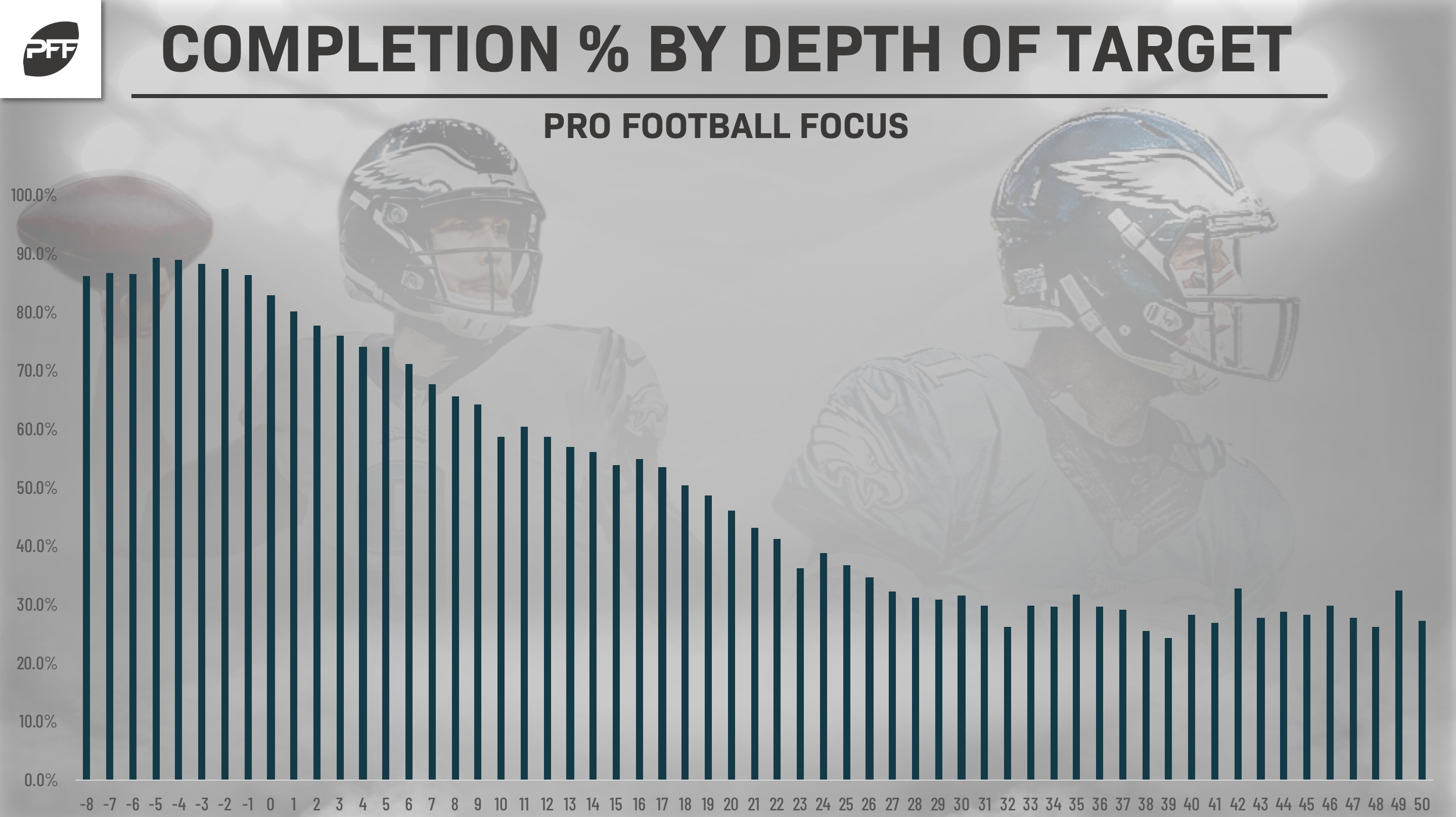 This is why, when attempting to measure how accurate a quarterback is, I prefer to use a metric called “depth-adjusted completion percentage.”

Here’s all quarterbacks with at least 250 pass attempts in 2018: 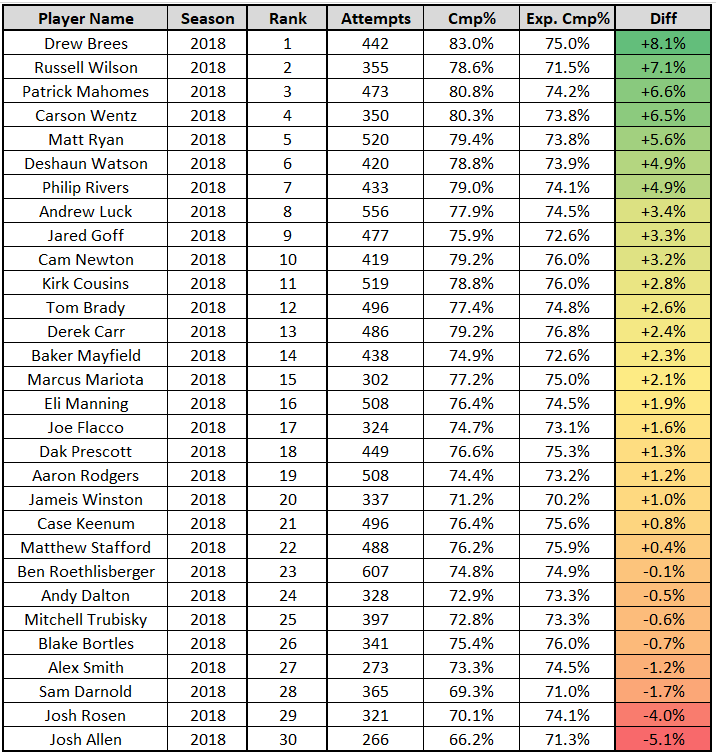 You’ll notice Drew Brees ranks first, and that’s no coincidence. Over the past 10 seasons, Brees has ranked top-six in depth-adjusted completion percentage nine times. He’s also ranked top-three in four of his last five seasons, including first overall in each of the past two seasons. No one else really comes close.

Well, no one except for maybe Matt Ryan. Ryan ranks top-six in seven of his past eight seasons. He ranked fifth-best last year and has four top-three finishes over his past six seasons. Last season Ryan finished second among quarterbacks in total fantasy points, recording the 14th-most total fantasy points by any quarterback in any season all-time. In any other year – and if not for Patrick Mahomes (who ranked third on this chart and first all-time in total fantasy points scored) – he’d be in consideration for overall QB1 draft status. Instead, he’s a massive value by current ADP (QB7).

Wentz ranked fourth on our list this year. Though some in Philadelphia questioned the team’s decision to move on from Foles, if we reduced our threshold to 150 qualifying attempts (to include him), he would have ranked only 20th-best of 36 qualifiers, while Wentz still would have ranked fourth. Based on these numbers, it seems Philadelphia made the right move in committing to Wentz.

Cam Newton ranked 10th on this list, which might not seem impressive, but was for him. That's a new career-high Newton, after ranking outside of the top-25 in three of his last five seasons.

Tom Brady ranked 12th last season, which was just the first time since (at least) 2007 where he ranked outside of the top-10. Turning 42 this season, and without Rob Gronkowski (his splits without Gronkowski are glaring), Brady’s best years are behind him.

Aaron Rodgers ranked ninth in fantasy points per game in 2018, which is just the second time he's ever finished outside the top-five, or just the fourth time he's ever finished outside the top-two. Despite the underwhelming fantasy production, he set the new all-time record in interception percentage (0.34) among all quarterbacks to ever attempt more than 200 passes in a single season. We should also expect more from him this year in a new less-predictable offense. Still, I think there’s cause for concern. Rodgers ranked below average here, and has underwhelmed in depth-adjusted completion percentage for four straight years. He also led the NFL in throwaways last season with 59 (at least 19 more than any other team) and would have ranked much worse here if we didn’t exclude those. In all honesty, it might be time to consider selling high on Rodgers in dynasty leagues.

Ben Roethlisberger’s ranking was also a surprise, finishing eighth-worst. Roethlisberger ranked top-11 in seven of nine straight seasons before ranking 16th, eighth, and now 23rd over the past three seasons. Like with Rodgers, it might be time to start worrying, and especially after losing Antonio Brown to the Raiders. Unlike Rodgers (who still ranked fifth-best in PFF grades), Roethlisberger also underwhelmed in our grades, ranking just 16th of 38 qualifiers.

Similarly, Mitchell Trubisky’s lowly ranking might have been a surprise to anyone who didn’t already check our player grades and noticed he ranked 33rd of 38 qualifying quarterbacks.

Last year’s rookie class struggled mightily outside of Baker Mayfield and (surprisingly) Nick Mullens. If we reduced our threshold for Mullens, he would have ranked ninth-best of 36 qualifying quarterbacks, while Sam Darnold (33rd), Josh Rosen (34th), Josh Allen (35th), and Lamar Jackson (36th) would have ranked bottom-four. Mullens is intriguing for (deep and superflex) dynasty leagues, considering he graded higher than Jimmy Garoppolo last year, and arguably posted better numbers last year than Garoppolo has throughout his San Francisco tenure. Although the rankings for Darnold and Rosen are concerning, accuracy isn’t as important for quarterbacks who are as prolific on the ground as Allen and Jackson, as I argued here.