Each week in this space, I’ll be highlighting the players I’m building most of my lineups around on that week’s main slate. (Most of these locks are for tournaments, though I’ll do my best to differentiate where needed.) Lock these guys into lineups and go from there. Check out below for Week 7.

You want a part of this potentially ridiculous Rams/Falcons game, and with Jared Goff looking shakier lately and offering dramatic home/road splits the last two years (21.0 points per game at home, 12.1 on the road), I much prefer Ryan, who extended his streak of consecutive games with 300-plus passing yards to seven last week. 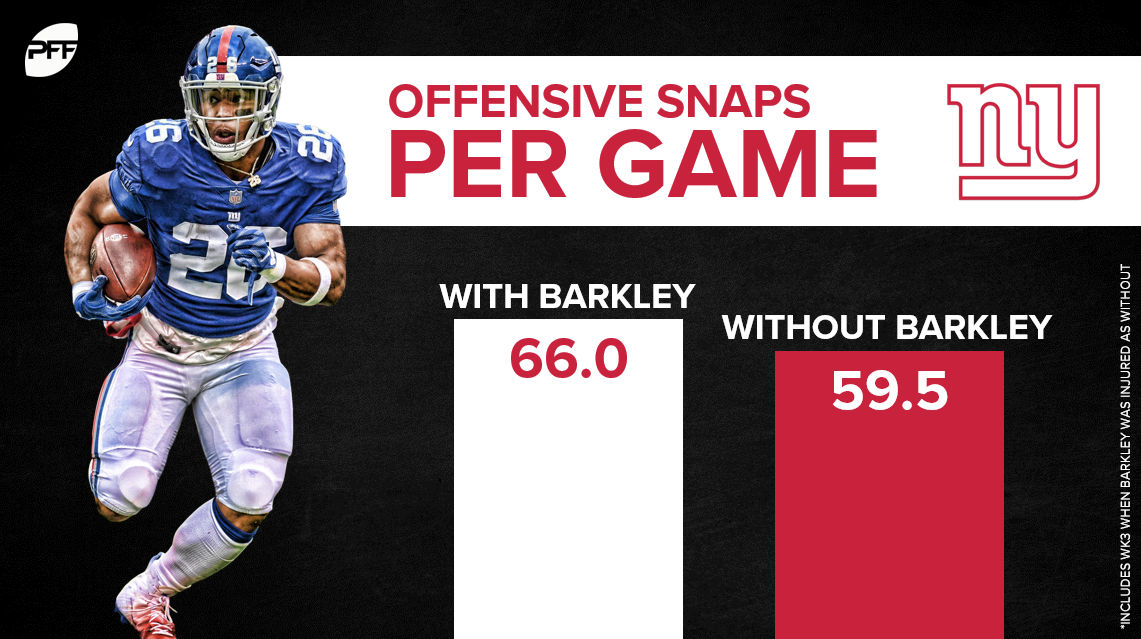 The Giants played 66 snaps in each of the two full games Saquon Barkley played this year, which would be a top-10 pace this season. In four games since (including the one in which Barkley got hurt), the team has averaged 59.5 snaps, a bottom-eight pace. Barkley is expected back this week, and against the also-fast-paced Cardinals, that should lead to plenty of snaps and fantasy opportunities for two quarterbacks in dream matchups.

As Scott Barrett noted in his Week 7 start/sit advice, Allen is averaging 19.0 fantasy points per game over his last 11 games if you take out Patriots matchups and 29.2 per game against bottom-10 fantasy defenses. Miami is last in the league in fantasy points per dropback and opponent passer rating and — crucially for a player like Allen who derives a lot of value from his legs — second-to-last in rushing yards allowed per game.

Fournette is second in the league in touches per game. He, amazingly, leads all running backs in routes run. The Bengals are allowing 15 more rushing yards per game than any other team, and more than 20 more than any team not based in Miami. Fournette is the sixth-highest-priced back on DraftKings at $7,000, $1,900 cheaper than Barkley and $1,000 cheaper than Dalvin Cook. That’s a ridiculous value and it makes him the lock of locks. On FanDuel, where Fournette is $7,900 and the third-priciest, he’s less of a steal, but either way, you want a piece.

The Ravens added Marcus Peters to an already-decent secondary this week, a move that could lead to teams turning to the run more against them. Carson, already second in the league in carries, is likely going to get the ball as many times as the Seahawks can give it to him in an effort to keep the ball out of Lamar Jackson’s hands, with the Seahawks 3.5-point favorites in a game with a high 51-point over/under.

Don’t let the committee situation in San Francisco scare you off of Coleman’s ridiculous value. He had one of the most valuable roles in the league last week, with all eight of the 49ers’ red-zone opportunities (per Scott Barrett’s Expected Fantasy Points). As 10-point favorites against a bad Washington team, there should be enough work for both Coleman and Matt Breida to be relevant, but it’s Coleman you should lock into your lineups.

This piece goes up Friday, before we really know how the Rams backfield is going to shake out this week because of injury concerns. But ultimately, the advice is simple: If Todd Gurley plays, you lock him into your lineups in a nice matchup. If Gurley sits but Malcolm Brown plays, you lock Brown (and his third-most forced tackles per carry) in. And if both sit, Darrell Henderson suddenly finds himself as the last man standing in the game with the week’s highest over/under, at 54 points. It’s basically a flow chart where every arrow leads to points.

Hilton’s prolific history against the Texans is well-documented, so instead of looking that way, let’s look at the current iteration of his opponent. Per our WR/CB matchup chart, Hilton has the single best matchup of the week (and not by a little) against Johnathan Joseph … and that presupposes Joseph returns from injury this week, which is no sure thing. The Texans have allowed the sixth-most PPR points to opposing receivers, including huge performances to Michael Thomas, Tyreek Hill, and especially Keenan Allen.

Golladay leads the league in end-zone targets (8) and is tied for the league-lead in red-zone targets (16) despite already having had his bye. His usage has been WR1-worthy, while his DFS salary has not kept pace, especially on DraftKings, where he’s only 18th among receivers in salary. The Vikings secondary is not the daunting opponent it has been in recent years, which Golladay having a nice matchup against Trae Waynes, sporting a 58.9 PFF grade this year.

If (and it genuinely is an if) Jalen Ramsey makes his Rams debut this week, the easiest way to deploy him might just be to point at Julio Jones and say “go,” rather than try to coach him up into a whole new defensive scheme. That would likely leave Ridley and Sanu against a mishmash of afterthought cornerbacks, now that Aqib Talib is on IR and Marcus Peters is on the Ravens. In a game with a 54-point over/under, you want a part of this passing game.

As if it weren’t enough to be the tight end facing the Cardinals this week, Engram also was the No. 1 fantasy tight end of his own accord before missing Week 6. Now apparently healthy, and with Patrick Peterson’s return theoretically jamming things up for Golden Tate and the like, the only thing working against Engram is his admittedly high price tag, as the main slate’s second-most-expensive tight end on both sites. Still, there’s every chance he’s more than worth it. 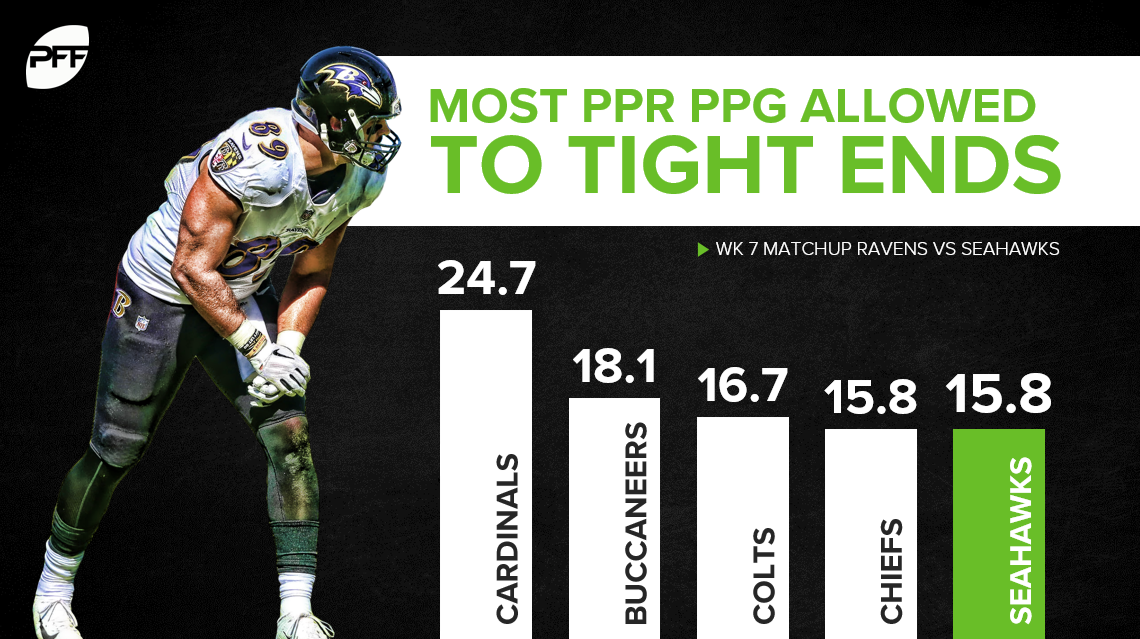 The Seahawks have allowed the fifth-most PPR points per game to opposing tight ends, including 20-plus-point games to Gerald Everett and Vance McDonald. Andrews is probably the top pass-catcher on the Ravens regardless, but when you factor in injury concerns around Marquise Brown (if he even plays), his role is even further cemented.

In DFS tournaments, whenever possible, paying down at tight end is advisable, given the flexibility that allows you at other positions. The problem is, tight end is generally so shallow that it’s hard to find options that low. Fells (on DraftKings) and Akins (on both sites) fit the bill, though, with five combined touchdowns over the last month. Both are top-12 fantasy TEs in that span, while the Colts are allowing the third-most points per game to the position.