Hello, and welcome to Week 7 of the XFPR — the Expected Fantasy Points Report. If you’re unfamiliar with expected fantasy points, you can read this in-depth explanation from the offseason. You can read more about expected touchdowns.

In layman’s terms, expected fantasy points measures the exact worth of a player’s volume — “how many points a player should have scored” given his workload, based on what the average player would have scored.

Through six weeks of action, here are the top-25 players in expected fantasy points (XFP) per game: 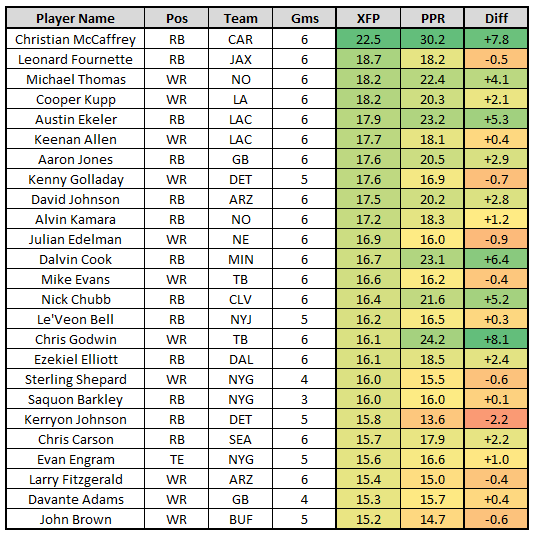 Last week, Evans led all players in XFP (30.0), though Chris Godwin still outscored him by 6.5 fantasy points. This one-week sample can also be taken as a microcosm of the 2019 season for both players — Evans seeing the better volume, but Godwin being the more productive of the two wide receivers. Evans ranks sixth among all wide receivers in XFP per game (16.6), while Godwin ranks eighth (16.1). However, Godwin leads all wide receivers in fantasy points per game (24.2), while Evans ranks 16th (16.2).

Godwin has been our single-most-efficient player this season (8.1), while Evans ranks below average for the fourth time in five seasons. Godwin will come back down to earth at some point this season but he should still be valued as a top-five wide receiver. Evans, meanwhile, will likely remain the volume-reliant low-end WR1 he’s always been.