Scott Barrett’s daily fantasy focus: The WR plays of the Wild Card Round

This week, for the Wild Card Round of the playoffs, we’ll be looking at each positional grouping at each team and examining their DFS value and fantasy football upside on both DraftKings and FanDuel. Below is the look at the wide receiver position.

Matchups: Philadelphia ranks worst of all 32 teams in fantasy points allowed to outside wide receivers. Though Chicago is one of the best all-around defenses, they too have been vulnerable to outside wide receivers, ranking fourth-worst. Seattle ranks 10th-worst, Houston ranks 12th-worst, while all other defenses rank better than average. Baltimore ranks second-best and Indianapolis seventh-best. Of these teams, Baltimore is worst to slot wide receivers (11th-most fantasy points). Interestingly, all other teams rank top-10. Philadelphia also ranks second-worst in schedule adjusted fantasy points per game allowed to opposing WR1s. Seattle, Houston, and Dallas rank 10th- through 12th-worst, while all of Indianapolis, Los Angeles (Chargers), Chicago, and Baltimore rank top-seven. 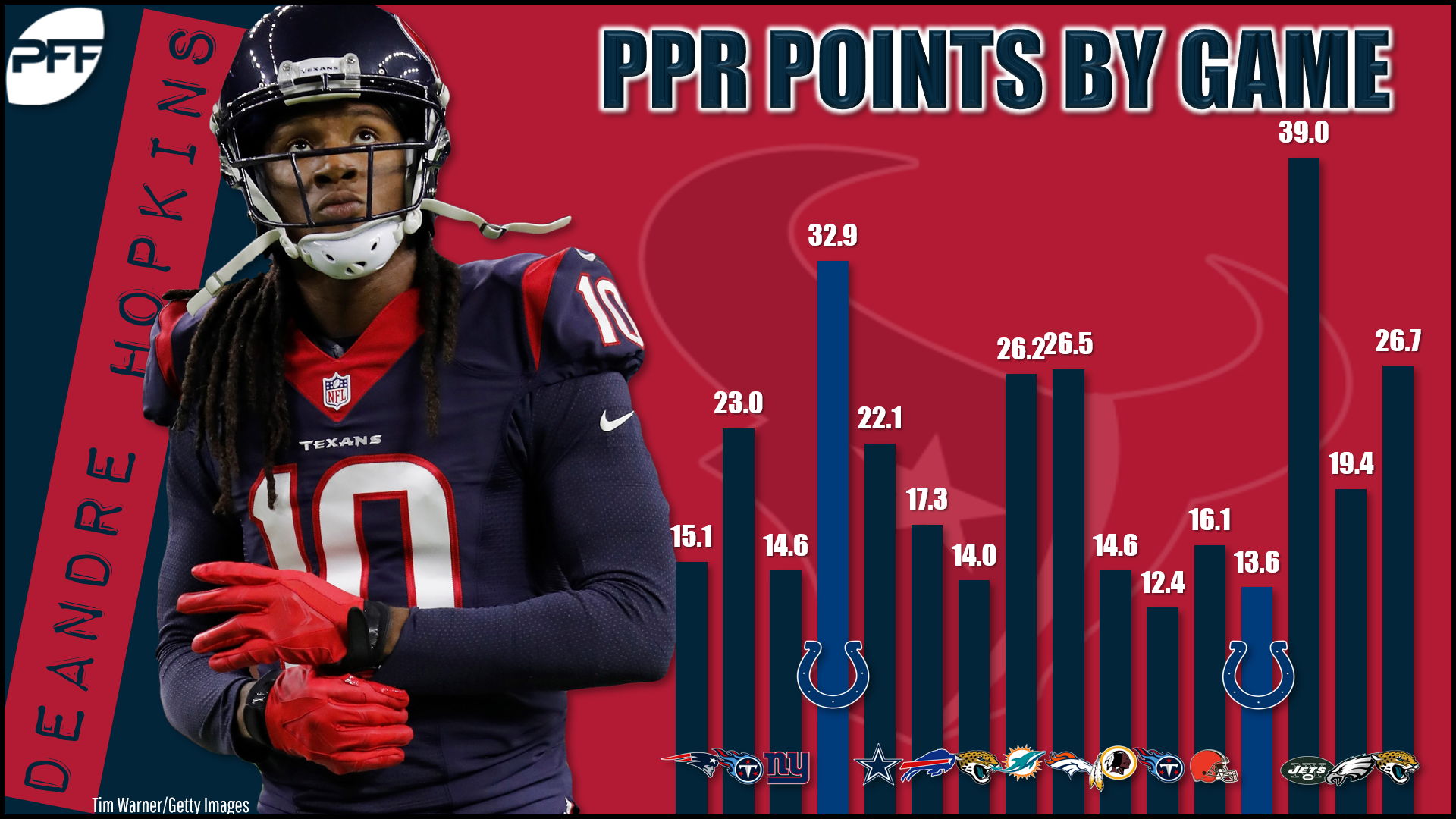 With all of Demaryius Thomas, Will Fuller, and Keke Coutee out for Week 17, DeAndre Hopkins (DK: WR1, FD: WR1) transcended an especially tough matchup (shadow coverage against Jalen Ramsey) to catch 12 of 16 targets for 147 yards. That sort of volume is highly encouraging, and especially when factoring the matchup and the fact that Houston led by 14-plus points for the majority of the game. Indianapolis is actually a fairly tough matchup, though maybe not as tough as his matchup last week. Indianapolis ranks seventh-best in schedule-adjusted fantasy points per game to opposing WR1s. Hopkins dropped 32.9 fantasy points on Indianapolis in Week 4, but they tried something different in Week 14. That week, they had Pierre Desir shadow and brought in safety help over the top, holding Hopkins to just 13.6 fantasy points. If this is the highest-scoring game of the slate (likely), it’s hard to imagine a scenario where Hopkins busts. I’ll be prioritizing him on a number of my lineups.

Coutee (DK: WR14, FD: WR12) is technically a game-time decision but has practiced in full all week after being out since Week 12. He made his NFL debut in Week 4 against Indianapolis, and caught 11 of 15 targets for 109 yards, in what was easily his best game of the year. With the exception of that game, Indianapolis has been one of the toughest defenses against slot wide receivers, but Coutee should benefit from excessive attention paid to Hopkins. I’m not sure about his ceiling, but he has a high floor and is a strong value on DraftKings. DeAndre Carter (DK: WR24, FD: WR16) is vaguely in play as a punt-option (he has 15 targets over the last three weeks), but the team might prefer Vyncint Smith (DK: WR26, FD: WR28) (five targets last week) in three-wide sets with Coutee returning. I think that’s unlikely, but it is possible.

If it’s not already obvious, I think Indianapolis/Houston is the game to attack, and because of this, I’m willing to prioritize the pass-catching options from this game (on both sides). In T.Y. Hilton‘s (DK: WR2, FD: WR2) first game against Houston, he saw only six targets, but caught four of those passes for 115 yards. In Week 14, he doubled his target total, catching nine passes for a whopping 199 yards. Houston hasn’t been great against WR1s, as alluded to above, and his recent history against them is certainly encouraging. I suspect I’ll have heavy exposure to the two quarterbacks in this game, as well as plenty of Hopkins, Hilton, and Eric Ebron.

Zach Pascal (DK: WR28, FD: WR25) also had quite a bit of success against Houston, scoring 17.6 fantasy points (6-56-1 on 10 targets) against them in Week 4 and 17.8 fantasy points (5-68-1 on six targets) against them in Week 14. He played on only 51% of the snaps in these games, and only 58% over the past three weeks. That’s because, after Hilton, Indianapolis uses their three other wide receivers in a near-even committee. This makes Dontrelle Inman (DK: WR11, FD: WR13) and Chester Rogers (DK: WR24, FD: WR18) equally intriguing, but certainly not top options. To Pascal's 127 snaps over the last three weeks, Rogers also totals 127 and Inman totals 124. Both have seen 12 targets over this span (to Pascal's nine), and good production. Inman averages 11.1 fantasy points per game over this span, to Rogers' 8.9, and Pascal’s 3.4. This is murky enough that I’ll probably stay away from this receiving corps after Hilton and Ebron, but like Pascal best of the other three due to his success against Houston.

Since Amari Cooper (DK: WR3, FD: WR8) joined Dallas, he ranks 18th among all wide receivers in expected fantasy points per game (13.9) and 10th in actual fantasy points per game (18.1). Of the wide receivers available on the slate, over this span, he ranks behind Hopkins, Hilton, and Keenan Allen. He’s been boom-or-bust all year, and, I’m sure, that will be the case all throughout the remainder of the season. Luckily for Cooper, Seattle ranks 10th-worst (second-worst on the slate) in schedule-adjusted fantasy points per game allowed to opposing WR1s and 10th-worst to opposing outside wide receivers (where he has run 84% of his routes since joining Dallas). He’s a top option at the position and has slate-busting upside. He’s a top play on DraftKings, though I’m not sure I’d prioritize him over Hilton or Hopkins unless running out a Dak Prescott lineup. 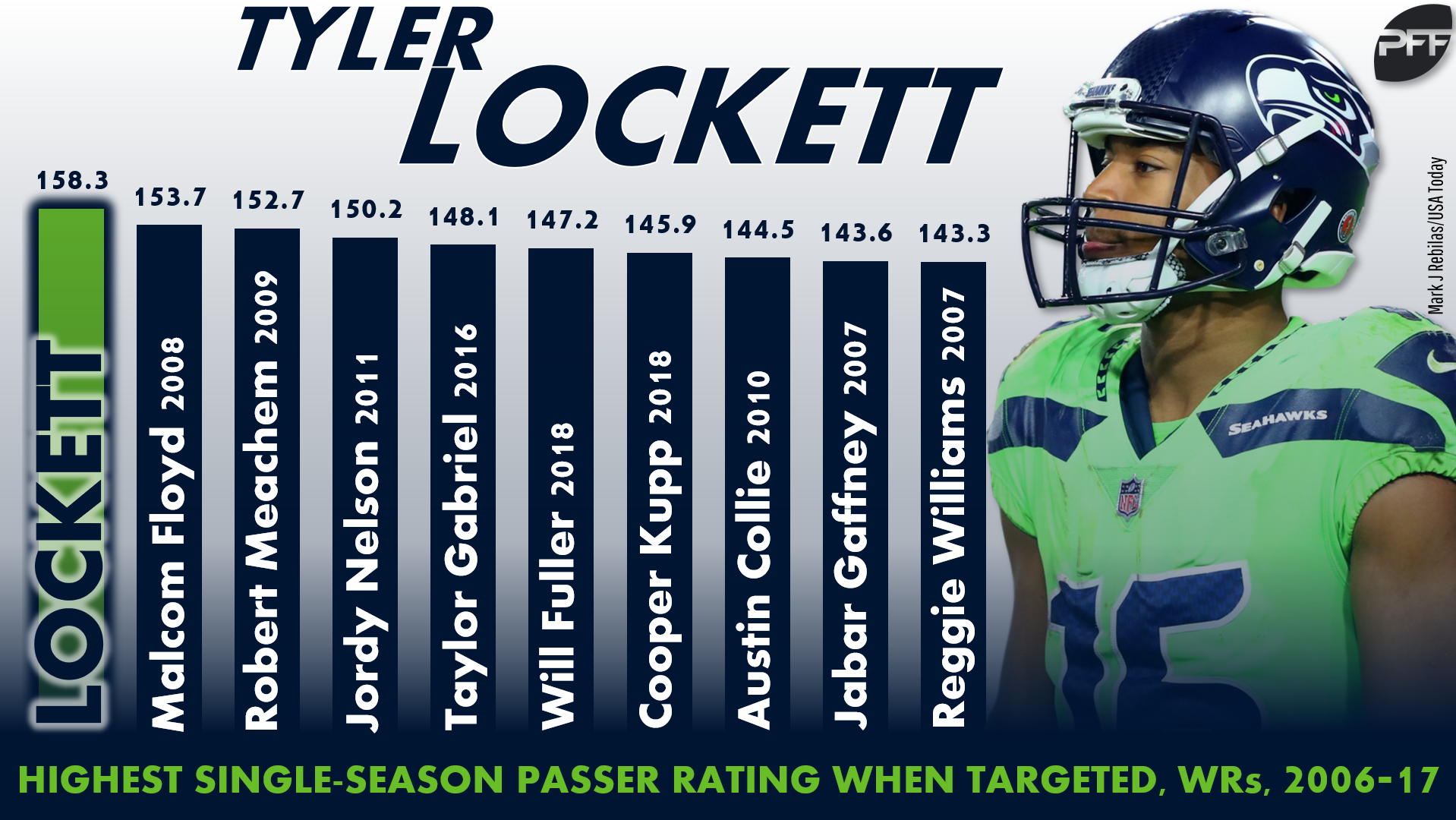 All of the data points suggest Tyler Lockett (DK: WR8, FD: WR6) is due for a regression to the mean, and that’s been the case since Week 4. However, that regression never came, and Lockett walks away from the 2018 regular season with best passer rating when targeted we’ve ever recorded (a perfect 158.3 rating).

Still, despite Lockett’s ridiculous efficiency numbers, I’m inclined to prioritize Doug Baldwin (DK: WR5, FD: WR5) on my own lineups. In each of Baldwin's last seven games, he has outscored Lockett in expected fantasy points. He averages 13.4 to Lockett's 7.4 over this span. In terms of actual fantasy points per game, over this stretch, he averages 14.3 to Lockett's 14.7. Baldwin has also scored a touchdown or totaled 80-plus yards in each of his last nine postseason games.

As I said at the top, Philadelphia is most vulnerable on the outside, while being much stronger in the slot. Baldwin has run 64% of his routes from the slot over the last three weeks, but that’s also where Lockett has run 50% of his routes over this span. Either both are near-equally decent plays (though I personally favor Baldwin), or both are a bit overrated this week. I’m not looking at any of Seattle’s other receivers, though David Moore (DK: WR21, FD: WR22) has randomly popped off at times during the season.

Since Lamar Jackson has taken over as the Ravens’ starting quarterback, Baltimore has run on an absurd 61% of their plays (league-average is 41%) and no wide receiver has scored more than 11.1 fantasy points in any game. You could go all-in on Michael Crabtree, he could score 40 fantasy points, and I’d still call you a fish for playing him. None of these wide receivers are in play this week outside of as salary relief or punt-play options.

Per Chicago Bears beat writer Adam Jahns, “Anthony Miller (DK: WR15, FD: WR22) said that his shoulder fully dislocated vs. the Vikings … and that it has “numerous” times this season. He never considered shutting himself down, though. He will play Sunday vs. Eagles.” On Thursday, Miller told reporters that he hasn’t been 100% all season. He’s an easy fade given the matchup (the Eagles rank fourth-best in fantasy points per game to opposing slot wide receivers), the injury, and recent production (nine receptions since Week 11).

Over the past two seasons, including playoffs and on a per-route basis, Alshon Jeffery (DK: WR6, FD: WR4) has been more productive with Nick Foles (0.40 fantasy points per route) under center than with Carson Wentz (0.36). On a per-game basis, that would equate to 14.8 fantasy points per game with Foles and 13.4 with Wentz. This would place him squarely behind the big-four wide receivers we’ve already covered in depth. As alluded to at the top, Chicago is a ferocious defense, but actually a top defense to target for outside wide receivers. They rank fourth-worst in fantasy points per game to outside wide receivers, which is where Jeffery runs 81% of his routes.

They rank eighth-best to slot wide receivers, which removes Golden Tate (DK: WR12, FD: WR18) from consideration, though Nelson Agholor (DK: WR16, FD: WR10) is a tougher call. Over the last four weeks he’s run 48% of his routes from the slot. He averages 21.8 fantasy points per game over the last two weeks, after being a fantasy afterthought for almost the entirety of the 2018 season.