Scott Barrett’s daily fantasy focus: The TE plays of the Wild Card Round

This week, for the Wild Card Round of the playoffs, we’ll be looking at each positional grouping at each team and examining their DFS value and fantasy football upside on both DraftKings and FanDuel. Below is the look at the tight end position.

Matchups: Interestingly, there are some great matchups for the tight ends this week. Indianapolis, Baltimore, Houston, and Dallas all rank as some of the league’s top “tight end funnel” defenses. Indianapolis has given up 27.5% of their total receiving fantasy points allowed to tight ends. That ranks most in the league. Right behind them is Baltimore (26.0%) and then Houston (25.9%). At sixth overall is Dallas (24.8%). Of the 32 teams, Indianapolis ranks worst in schedule-adjusted fantasy points per game to opposing tight ends. Houston ranks third-worst. Baltimore ranks 12th-worst. Dallas and Chicago are closer to average, while the Seahawks, Chargers, and Eagles rank top-10. On my own lineups I’m expecting heavy exposure to Eric Ebron and Zach Ertz, and maybe Hunter Henry if he plays. That’s also how I see most lineups shaping up, but these players are going to be chalky for good reason. 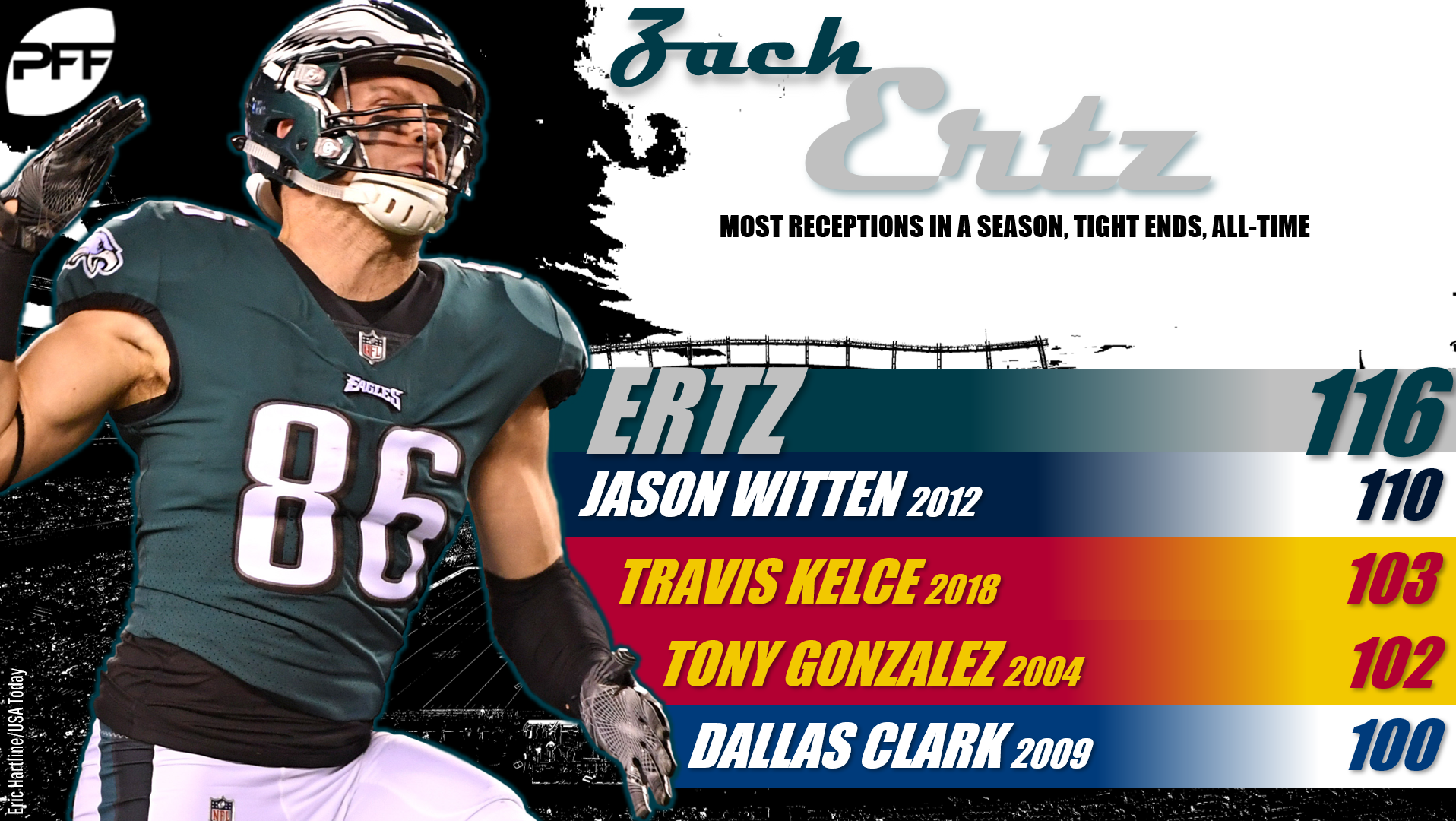 Ertz has not only been great this year, he’s been historically great, putting together the sixth-greatest fantasy season by a tight end all time. His production has not wavered in spite of quarterback changes, and volume has been even better with Nick Foles. Despite the tough matchup against Chicago, he still looks like a strong value on DraftKings. Among receivers on this slate, he ranks behind only DeAndre Hopkins in DraftKings fantasy points per game. In terms of salary, he ranks fifth. On FanDuel, he ranks fourth in both salary and FanDuel fantasy points per game.

In games with Jack Doyle inactive, Ebron averages 15.7 expected fantasy points, 13.2 actual fantasy points, 0.61 expected touches, 0.60 actual touchdowns, 90.5 air yards, and 8.6 targets per game. Among all tight ends, respectively, here are where those numbers rank: third, fourth, first, first, first, third. 15.7 expected fantasy points per game also ranks 13th-best among all receivers. Doyle missed both of Indianapolis' games against Houston earlier in the year. In Week 4, Ebron saw 10 targets, catching five for 40 yards and a score. In Week 14, he saw eight targets, catching four for 65 yards and a score. This resulted in an average of 15.8 fantasy points per game. Among all 32 defenses, Houston ranks as a top-three matchup for tight ends, whichever way you want to look at it. Though I’ll also have heavy exposure to Ertz, Ebron is my favorite option at the position this week. 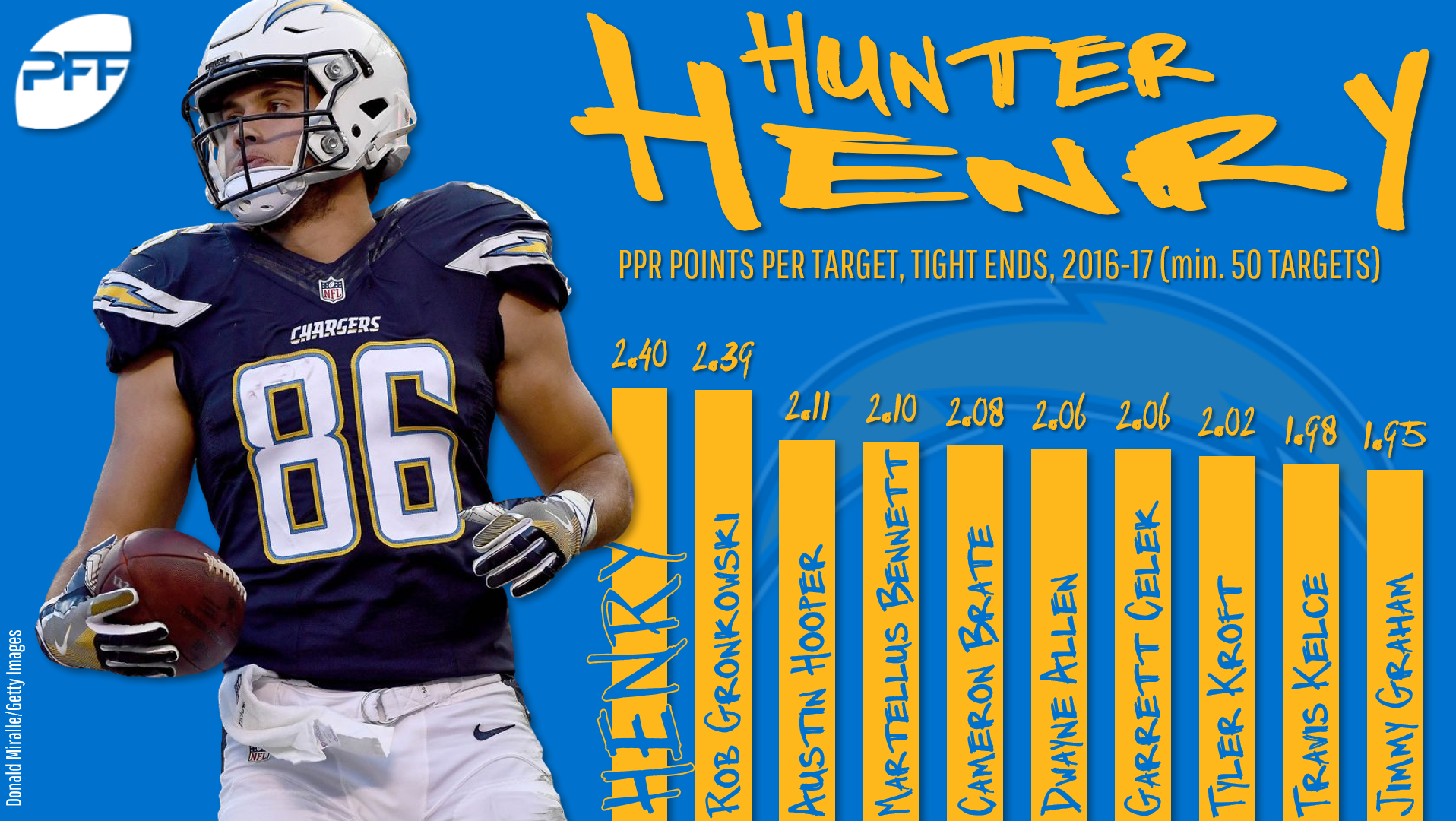 Henry is expected to play this week, and is minimum priced on DraftKings, while being $900 off minimum price on FanDuel. If he does play, he’ll be on a snap-count and will be playing at less than 100%. Since entering the league, Henry has hit at least 70 receiving yards or scored a touchdown in 17 of his 25 targeted games (68%). In 2016-2017, he ranked first in fantasy points per target, second in PFF grade, second in yards per target, and third in yards per route run. He did this while drawing just 44% of the team’s tight end targets, to Antonio Gates’ 54%. He’s risky, with low upside, and well behind Ertz and Ebron, but he is my favorite of the cheaper tight ends.

After these three names, things get ugly, and you’re left mostly with dart-throw punt-plays. Someone could go off, but, after consulting my best spreadsheets (read: staring blankly at my computer for two hours), your guess is as good as mine as to who that is. … Ryan Griffin (DK: TE8, FD: TE18) has the matchup in his favor but is stuck in a three-way-committee averaging just 2.4 targets per game over his last five games. … Blake Jarwin (DK: TE5, FD: TE5) just dropped 39.9 DraftKings fantasy points on the Giants, but that’s also more than he totaled in all other games this year. … Baltimore keeps their tight ends in a committee and it's really hard to trust any receiving option tied to Lamar Jackson. … Seattle also prefers a committee-approach at the position, and neither Ed Dickson (DK: TE10, FD: TE9) or Nick Vannett (DK: TE10, FD: TE9) has reached 25 yards since Week 10. … Trey Burton (DK: TE3, FD: TE3) ranks third in my projections but is over-priced against a Philadelphia defense that has been one of the league's toughest tight end matchups all year (third-best). He’s been mostly disappointing all year, and he’s too close in price to Ebron while being too far away in our projections. … Dallas Goedert (DK: TE8, FD: TE6) and Antonio Gates (DK: TE6, FD: TE7) are nothing more than low-upside touchdown-or-bust punt plays.