With a full slate of Week 3 NFL football action coming Sunday, it’s time for fantasy football players to identify their DFS locks of the week. There are a bunch of good players in good spots this week, but as always, you need to narrow it down to your favorite plays.

Below are some of the players you can lock into your Week 3 DFS lineups. 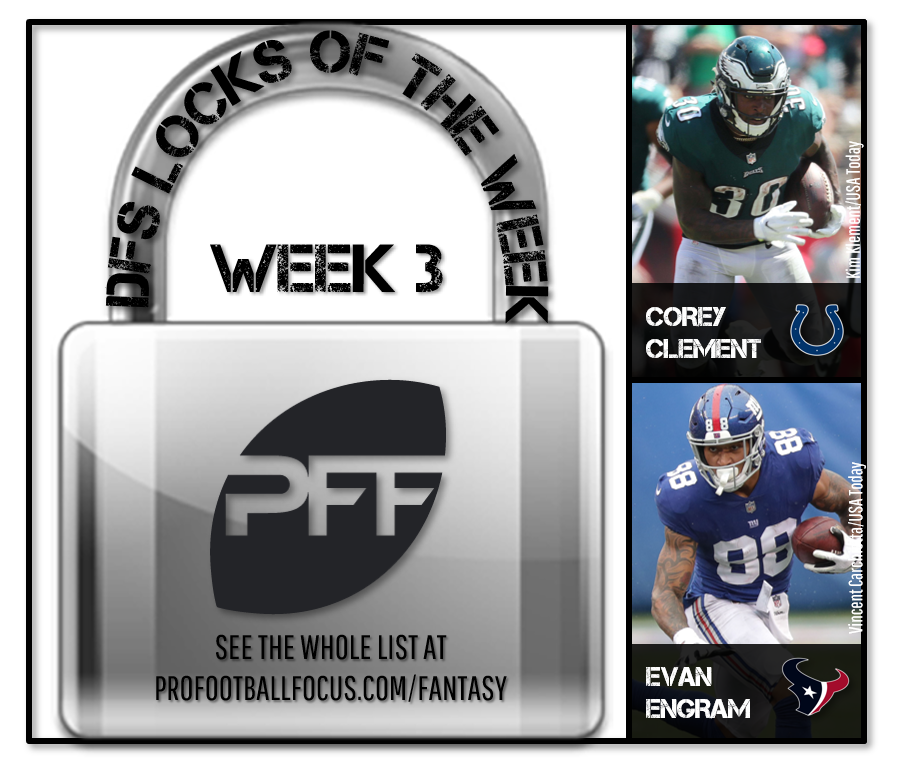 The Panthers/Bengals game should be up in pace this week, and Newton has been scoring fantasy points at his usual fast clip. Newton’s 0.58 fantasy points per dropback ranks sixth among quarterbacks so far this year, while his 18 rushing attempts rank first at the position. Newton is our fifth-highest-graded quarterback on the year, and the Bengals have given up an average of 348 passing yards per game through two weeks.

Ryan is a bit underpriced given his circumstances — especially on DraftKings, where he is the 13th-most-expensive quarterback. The Falcons are 3-point home favorites against the Saints with a game over/under of 53.5, second-highest on the main slate. Ryan struggled in Week 1 against the Eagles, but he picked it up in Week 2, completing 82.1 percent of his passes for 272 yards and two passing scores. He added two rushing scores for good measure.

Mahomes is the most expensive quarterback on FanDuel and the second-most-expensive option on DraftKings, and while we can’t expect him to throw for five touchdowns each week, you have to like him as a home favorite against the 49ers in a game with the highest over/under of the week, at 55.5. The 49ers have given up the seventh-most fantasy points to opposing quarterbacks so far this year.

Kamara led all running backs in fantasy points per touch last year, and he’s the leading running back so far this year. He’ll provide a solid floor thanks to his pass-catching skills against the Falcons, who gave up 14 receptions to Christian McCaffrey last week.

Backup running backs who are thrust into starting roles are often the best values in DFS. With Joe Mixon out, Bernard will handle backfield duties. He found himself in a similar situation last year from Weeks 13-16, and he averaged about 20 touches per game and nearly 110 total yards per game over that stretch. The Panthers, his Week 3 opponent, gave up 153 rushing yards to the Falcons last week.

Speaking of the Falcons’ run game, Coleman is still the lead back with Devonta Freeman sidelined. Coleman saw 20 touches last week and gained 125 total yards. Coleman should be in for a similar workload again in Week 3. Coleman checks the boxes: Home favorite in high-scoring affair serving as the lead back with 20-plus touches firmly in his range of outcomes.

Jay Ajayi and Darren Sproles are sidelined this week, which means Clement should shoulder the load in Week 3. He had 11 touches for 85 yards and a touchdown in Week 2, playing 33 of a possible 79 snaps (42 percent). We can expect even more touches for Clement in Week 3.

Green has one of the best individual WR/CB matchups of the week, as we expect shadow coverage from Carolina’s James Bradberry (Bradberry shadowed Julio Jones last week). Bradberry is no match for a player like Green; Bradberry’s PFF grade of 59.0 ranks toward the bottom of the league — just behind Mr. retired-at-halftime Vontae Davis.

Thielen and Diggs have combined for 404 yards through two games — second-most among all wideout duos in the league so far (DeSean Jackson and Mike Evans have 505). This week, they draw a Bills secondary featuring Phillip Gaines (our lowest-graded corner through two weeks), Rafael Bush (our 12th-lowest-graded corner), and Tre’Davious White (who is actually very good — fourth-highest grade so far this year). Thielen and Diggs will be all over the formation, though, and should get their fair share of Gaines and Bush.

The return of Carson Wentz should help Agholor, who is already vacuuming up all of Philadelphia’s wideout targets. Through two weeks, over 81 percent of passes thrown to Eagles receivers have gone to Agholor. He has caught 16 of his 20 targets for 128 yards and a score, and he has one of the best individual matchups of the week in Week 3 against Indy slot man Kenny Moore, who is given up 2.12 yards per route covered — fourth-most among this week’s starting corners.

Like Agholor, Ertz stands to benefit from the return of Wentz. Also like Agholor, Ertz has been a target hog, with 23 targets through two weeks — seven more than any other tight end in the NFL. Ertz also has the best individual TE matchup of the week against the Colts — and it’s not really close.

Kelce also has one of the best individual TE matchups of the week going against the San Francisco 49ers, who have given up a touchdown to tight ends in each of their first two games. The Chiefs have an implied team total of 31 points, so there’s a good chance Kelce finds his way into the end zone again in Week 3. Kelce has seven red-zone targets so far this year, more than any other player on the Chiefs.

Engram has a decent matchup against the Houston Texans, but the real reason to like him is because of his price (especially on DraftKings). Engram has played 89 percent of New York’s snaps this year. Engram got rolling last week with a line of 7-67-1, and the Texans gave up a big 7-123-1 line to Rob Gronkowski in Week 1.