As we head into Week 10 of the fantasy season, it’s time again to look at the committee backfield situations around the league. No matter how much consensus there is in fantasy football, each week the scoring leaderboard is littered with surprise names. Oh, you pegged Mike Davis for seven catches and a top-12 fantasy performance among running backs in Week 9? Well, kudos!

Along with Davis, the top-12 fantasy RBs from this past week included the likes of Tevin Coleman, Duke Johnson, James Conner, and James White. That list may look rather ho-hum now, but none of those guys entered 2018 as the projected lead option on their own teams.

With 10 teams set for a bye over the next two weeks, those RBs on the lesser end of backfield committees are pushed from the fantasy fringes and into starting lineups. If you are in a shallow league, chances are you may have even just spent the bulk of your remaining FAAB budget on Johnson or Davis. That’s okay, but then again, this column exists to highlight the reasons for snatching up those less heralded names before everyone else is lining up to do the same.

Before we dig into five running backs who are trending up and five who are trending down for Week 10, let’s take a quick look at how things panned out for the players we discussed last week.

Notes: Darren Sproles is expected to return in Week 10, but that impacts Corey Clement’s role more so than Adams’, who has showed more juice than any other Eagles’ RB since Jay Ajayi’s injury. … Along with an increase in volume of late, Jones is getting 2.8 yards before contact, tied for second-best in the league (min. 30 carries). … Brown made his one touch count, flashing impressive balance on this touchdown . … Not only did McGuire turn 10 touches into 67 yards, he also out-snapped Isaiah Crowell, 36-23, albeit in a negative gamescript. … Bell does not need to return by Week 10 in order to be eligible for free agency as reported all along by certain outlets, and there are growing rumblings that he may ultimately decline to sign his franchise tender.

If Johnson’s usage under Hue Jackson and Todd Haley was criminal, than Freddie Kitchens is the cold case lawyer righting the ship. With Kitchens, the former running backs coach turned offensive coordinator, running the show, Johnson saw a season-high in touches in the first half alone and finished as the RB5 in PPR scoring for the week. In catching 9-of-9 targets, Johnson averaged 3.0 yards per route run en route to one of our Sunday Standout awards for Week 9.

He continues to be one of the league’s most efficient weapons out of the backfield, and only now does Johnson appear in line for a long-awaited uptick in volume. That should continue this week, with the Browns home underdogs against a Falcons defense allowing the second-most receiving fantasy points to opposing RBs. In case you need a reminder, Johnson finished as an RB1 in PPR scoring this past season. 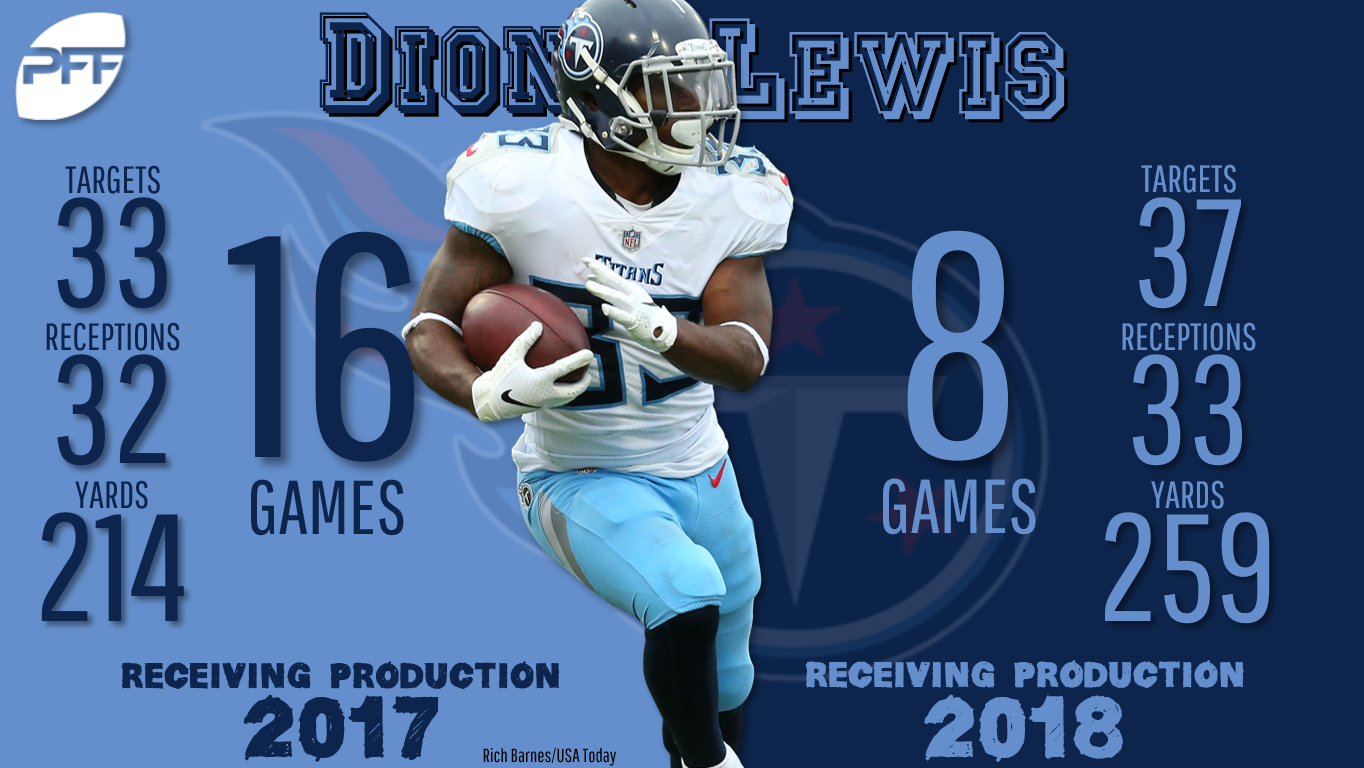 Derrick Henry has found the end zone in two straight and is virtually even with Lewis in PFF grade on the season. However, Lewis has nearly tripled Henry in snaps over the past two weeks, including a 59-14 edge against Dallas Monday night in a positive gamescript. I bring this up mostly because I found it surprising that Lewis was started in less than half of ESPN leagues this past week.

That certainly shouldn’t be the case this week with Tennessee being a one-touchdown underdog at home against New England. Somewhat quietly, Lewis needed only eight games to eclipse last season’s number of catches and receiving yards. Currently on pace for 1,196 scrimmage yards behind PFF’s No. 4 ranked O-line, Lewis is a positive regression candidate with only two touchdowns. He found the end zone nine times a year ago.

Look, Phillip Lindsay has been pretty darn good and is locked in as an integral part of Denver’s offense. It’s also no secret that he has benefited from working behind our No. 3-graded run-blocking offense. Of RBs with at least 50 carries, he is tied for the most yards before contact per rush (2.8). Still, rookie Freeman is somewhat of a forgotten man given that Denver is on a bye and he hasn’t played since Week 7.

Freeman makes for a sound buy-low candidate behind that O-line, as he’s averaging 3.7 yards after contact, compared to 2.7 for Lindsay. The 6-0, 229-pound Freeman has scored on 2-of-3 carries inside the five, while the 5-8, 190-pound Lindsay has converted 2-of-5 such opportunities. At the very least, Freeman would appear better suited for short-yardage work considering he’s already found the end zone four times in 71 rushes. He also happens to own PFF’s No. 17 rushing grade this season, ahead of quite a few notable names.

Through no fault of his own, Michel is in real jeopardy of ceding his workhorse role to James White. During a three-game stretch Weeks 4-6, Michel averaged 105 yards on 22 carries and scored four times. However, he suffered a knee injury the following week and has been sidelined ever since. Now, the first-round rookie isn’t just going to get Wally Pipped when he returns this week, but there is legitimate concern about what type of volume fantasy owners should expected moving forward.

Positive gamescripts are all Michel, and there will be no shortage of those for a Patriots team that has won four straight and faces the Titans and Jets over their next two games. However, there’s a reason White is our No. 7 RB in our consensus PPR rankings for Week 10 and that Nick Chubb, aka Cleveland’s non-PPR prototype of Michel, is a mid-RB2 in both our rankings and projection model. White has been one of the top DFS values in terms of Scott Barrett’s actual opportunity, and our Eric Eager even made a case for White as an MVP candidate.

Well then. Dalvin Cook looks to be over his hamstring injury after all, and he now has the bye week to get even healthier. Upon his return in Week 9, Cook out-snapped (28-22), out-touched (14-11) and out-produced (109-47)  Murray. Mind you, Murray had been a bona fide fantasy RB1 during Cook’s absence, and Cook entered Week 9 with fewer than 100 rushing yards in what was looking like an injury-lost season.

Kudos to those who were wise enough to sell Murray at peak value. He averaged just seven touches over the season’s first four games and figures to settle around the range of 8-10 touches moving forward. It bears mention that he’s scored on two of his three carries inside the 5 and had racked up 20 rushing scores over his previous two seasons. Still, a touchdown-dependent backup is of little use in fantasy beyond a desperation bye-week fill-in.

Common logic suggests that Raheem Mostert’s season-ending injury boosts Breida’s stock, and it does. But if you are looking to capitalize on that perceived value, be like the guy in one of my dynasty leagues who (unsuccessfully) offered up Breida for Josh Gordon. Playing through a nagging ankle injury, Breida ranks 47th in fantasy points per game since Week 4 and has not topped 61 rushing yards in a game during that span.

In fact, he’s averaging almost as many yards before contact (2.7) as after (2.8). Ask yourself this: if the 49ers brass was all that high on Breida to begin with, would they have fed Carlos Hyde last year and signed Jerick McKinnon to a lucrative deal in the offseason? Don’t sleep on Alfred Morris, who has logged the sixth-most rushing attempts (8) inside the 5 this season despite minimal involvement since Week 5, thanks in part to the emergence of Mostert. All things considered, it’s best to fade any 49ers player not named George Kittle.