You can’t read about running backs for fantasy football very long at all without coming across a reference to yards per carry. It’s simple and popular. I’m not immune to it myself. Despite that, I loathe the statistic. It’s inherently biased and noisy, too heavily weighting offensive line play.

Pro Football Focus offered a superior alternative, and subsequently helped revolutionize how we look at running back efficiency by creating the “elusive rating” metric. This statistic helps “distill the impact of a runner independently of the blocking in front of him by looking at how hard he was to tackle.” Elusive rating’s formula uses yards after contact per attempt and missed tackles forced per touch, rather than raw yardage totals, as its main variables.

You can access these metrics yourself if you’re a PFF Elite subscriber.

Today, I wanted to highlight the running backs who stood out most by elusive rating in 2018, and what that might mean for their fantasy potential in 2019.

Among all 67 running backs to see at least 75 touches in 2018, here’s who ranked highest by elusive rating: 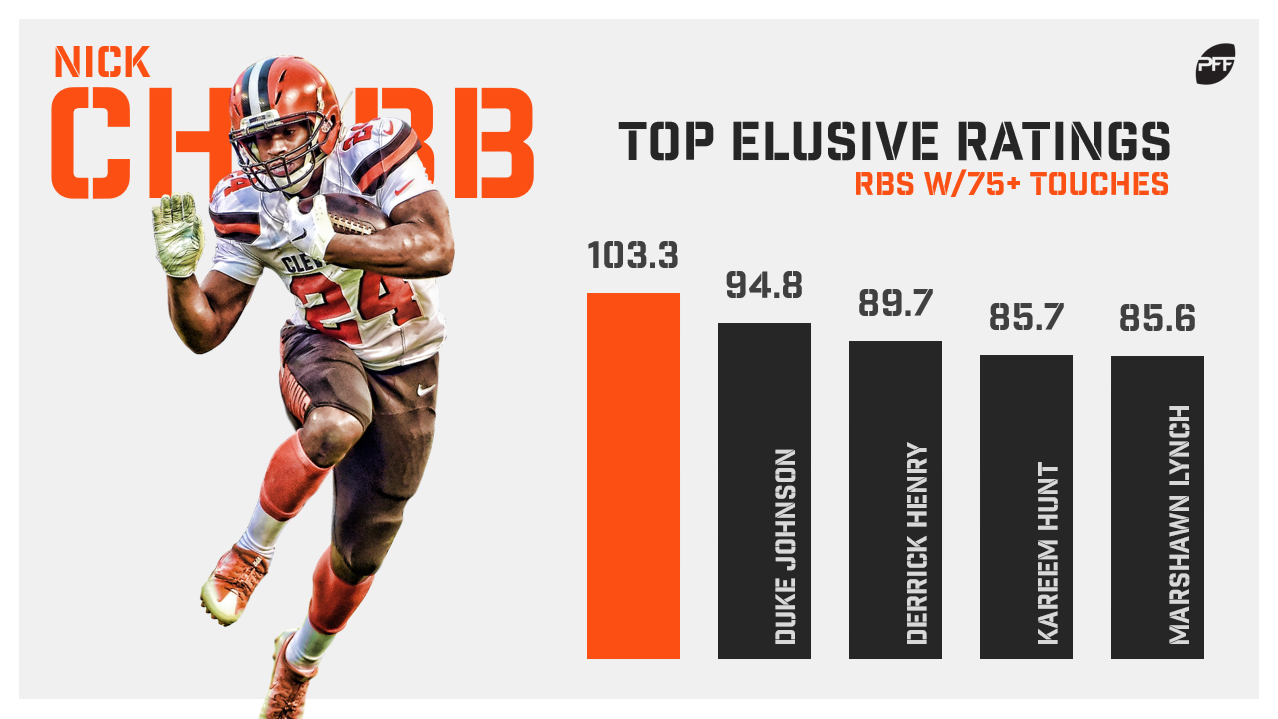 Before I dive into the analysis, I should also note that some of these numbers are among the best we’ve ever recorded. Among all 372 instances of a running back recording at least 150 touches in a single season this past decade, here are the top-10 seasons by elusive rating: 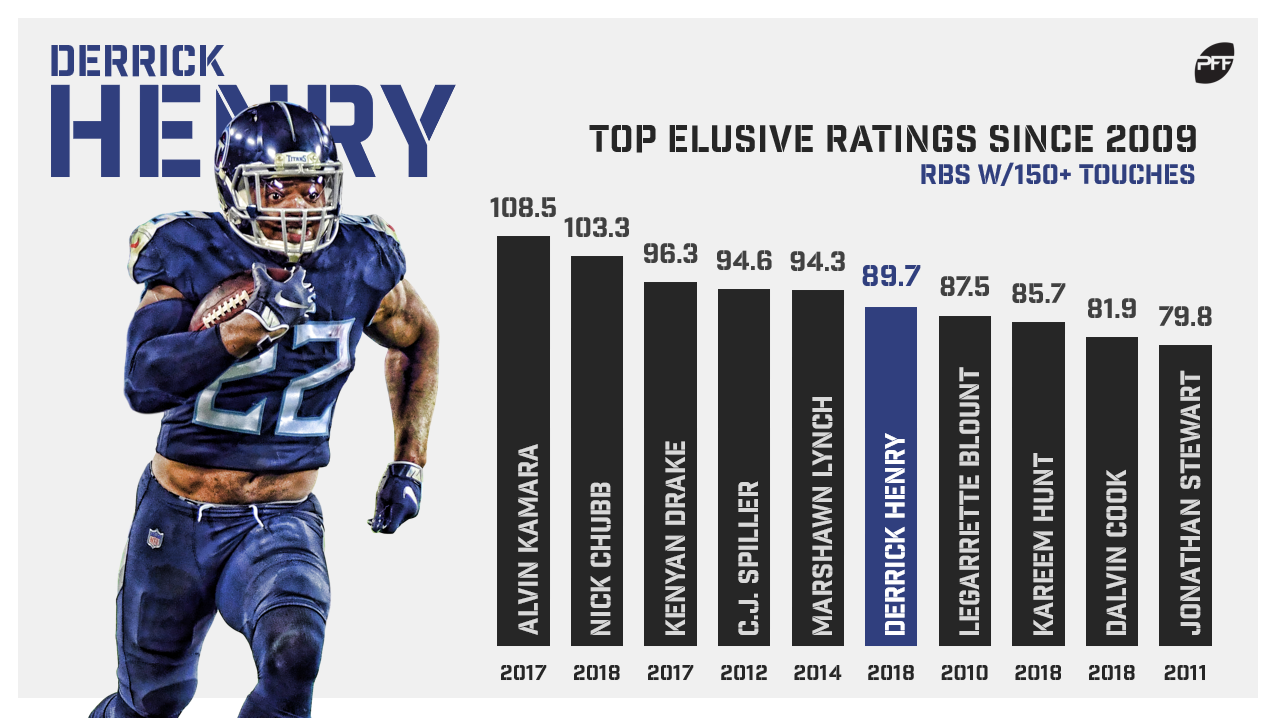 The Browns have quite the embarrassment of riches at the running back position, with three different running backs ranking top-four in elusive rating last year.

Chubb was PFF’s highest-graded running back last season and recorded a league-leading 103.3 elusive rating, which also ranks second-best this past decade. He averaged 4.47 yards after contact per attempt, which also led all running backs this past decade. Hunt is our second-highest-graded running back over the past two seasons, and in each of his past two seasons compiled one of the decade’s top-15 elusive ratings. Johnson ranked second-best in elusive rating last season (94.8), behind only Chubb, and has ranked top-two in receiving missed tackles forced in three of the past four seasons.

While all of this talent is good news for Browns fans, it speaks to a difficult situation for fantasy owners to navigate. From Week 7 until the end of last season, Chubb averaged 16.5 fantasy points per game, which would have ranked 11th over the course of a full season. He was hyper-productive for fantasy, but mostly due to hyper-efficiency, ceding targets to Johnson. Johnson will likely (though possibly not) reprise his role as the team’s primary passing-down back, so long as he isn’t traded before then (that’s his preference, but it seems unlikely at the moment). Hunt will have to serve an eight-game suspension in 2018 but upon his return will easily be the league’s best backup running back. Could that mean a diminished workload for Chubb in Week 10 and beyond? According to one beat writer, that seems likely, though Chubb should at least still be at the top of the pecking order.

Henry ranked third in elusive rating last year (89.7) and, even more impressively, averaged 4.21 yards after contact per attempt, which ranks third-best this past decade. Henry also ranked 11th in yards per carry (4.93), well above Dion Lewis (3.34), who ranked fifth-worst. Even so, Lewis still out-snapped Henry 600 to 401. That split tipped more toward Henry’s favor over the final four weeks of the season (134 to 107) when Henry averaged 146 rushing yards per game. Although these numbers certainly imply he’s deserving of more carries in 2019, that’s probably unlikely unless gamescript massively improves (it shouldn’t). He’s just too much of a liability as a pass-catcher to ever earn bell-cow status, and as a result will likely continue to yield snaps to Lewis, to the dismay of fantasy owners everywhere.

Despite dealing with injuries for just about half of the season, Cook was still one of our most efficient runners last year. In addition to ranking sixth in elusive rating, he averaged 0.27 missed tackles forced per touch, which led the league and ranks fifth-best this past decade. From Week 11 (his first week off of the injury report) until the end of the season, Cook played on 76% of the team’s snaps and averaged 15.7 fantasy points per game. If over a full season, that would have pushed him up from 19th in fantasy points per game (13.8) to 11th. This sort of efficiency and volume is exactly what we should expect from Cook after a phenomenal college career and an inspiring (though injury-shortened) rookie season.

Last season Ekeler ranked seventh, Gordon ninth in elusive rating. Ekeler was also our sixth-highest-graded running back last season, with Gordon was right behind him in seventh. Gordon is being drafted as a top-six pick but I think there’s a legitimate risk (not being factored into his current ADP) that Ekeler might be able to turn this into a committee backfield. Luckily, Gordon has been good enough that this risk shouldn’t be large enough to push Gordon out of the first round in our rankings.

Conner ranked 11th in elusive rating last season, and, by nearly every measure, was more efficient than Le’Veon Bell in 2017. Unfortunately, given the lack of courtesy the team has showed their Pro Bowl running back, Conner has been bumped all the way from No. 8 overall to 20th in my rankings. In May, the Steelers discussed using both Conner and Jaylen Samuels in the backfield at the same time, with Benny Snell around as well. Further, “GM Kevin Colbert has indicated that, despite having three viable options at tailback, any of them could potentially become the new workhorse, depending on performance.”

You’ll notice in our chart highlighting the best elusive ratings of the past decade that Kamara’s 2017 season ranks first and Drake’s ranks third. In 2018, both regressed closer to the mean, with Drake ranking 23rd and Kamara ranking 33rd of 67 qualifiers. Kamara still dominates a number of other metrics and is well-worth the high-end first-round pick it will cost to acquire him. Drake, meanwhile, might be one of the better values at the position this year (ADP: RB26). Drake finished 14th at the position in total fantasy points last year and now has even less competition this year. On top of that, there’s no way Miami again ranks last in pace of play (54.9 plays per game in 2018, 8.0 plays per game less than league-average). Miami is unlikely to come close to its 2018 win total this year, but Drake is also at his best (for fantasy) in games with negative gamescript.