Metrics that Matter: How far apart are Cook and Fournette really?

TALLAHASSEE, FL - OCTOBER 29: Dalvin Cook #4 of the Florida State Seminoles celebrates a touchdown during a game against the Clemson Tigers at Doak Campbell Stadium on October 29, 2016 in Tallahassee, Florida. (Photo by Mike Ehrmann/Getty Images)

(“Metrics that Matter” is a short feature that appears every Tuesday, Wednesday, and Saturday, highlighting a notable fantasy lesson to be learned from PFF’s advanced stats.)

I’m going to try to preface this with some humility. I don’t think I’m better, smarter, or more-knowledgeable than anyone in the Jaguars’ front office. I don’t think I’m a better talent evaluator than anyone in their scouting department. I’m just a lowly stat guy. With that disclaimer — after looking at the stats — the stats say drafting Leonard Fournette at No. 4 overall was probably not a great pick, especially given hindsight of the fact that Dalvin Cook went 37 picks later.

I like Fournette and think he’s a talented running back, but I’m not sure he’s a better talent than Cook. Factoring in the expense of draft capital at each pick, the debate is made easy.

On top of draft cost, Fournette is now also the highest-paid running back in the league in terms of average guaranteed salary per year (the franchise-tagged Le’Veon Bell is excluded), while Cook ranks 30th-highest.

Much has been made about Cook’s “poor” combine numbers. I’m not reading too much into this, and was actually quite impressed by his performance in several events. He put up 22 reps in the bench press (fourth-most among running backs), which helped alleviate some concerns regarding his surgically repaired shoulder. With a 4.49-second 40-yard dash, he ranked sixth-best by weight-adjusted 40 time (Fournette ranked first). Cook would later run a 4.47 40 at his pro day. Cook trumped Fournette in the vertical, which was the only other event both running backs competed in.

I look at athletic measurables when profiling rookies, but this always takes a back seat to production and efficiency. Over their respective collegiate careers, Cook averaged 6.51 yards per carry while Fournette averaged 6.28.  However, this doesn’t mean too much to me either — when comparing running backs, I tend not to be too concerned with yards-per-carry average. One of the flaws to yards per carry is that it fails to divorce offensive line play from running back play. Yards after first contact and missed tackles forced per carry, instead, are a more accurate representation of a runner’s ability with the ball in his hands, independent of the blocking in front of him, and my preferred statistics to reference when measuring running back efficiency.

Cook bested Fournette in yards-per-carry average over their careers, but Fournette came out on top in 2016 with 6.55 yards per carry as opposed to Cook’s 6.13. At surface level, this suggests we give an edge to Fournette, but when we factor in offensive line talent I’m not sure that’s still the case. Of 129 qualifying teams, LSU’s offensive line ranked 29th-best in snap-adjusted run-blocking grade, while FSU ranked a lowly 99th-best. Cook’s dominance relative to his blocking is even more evident in our next two statistics. 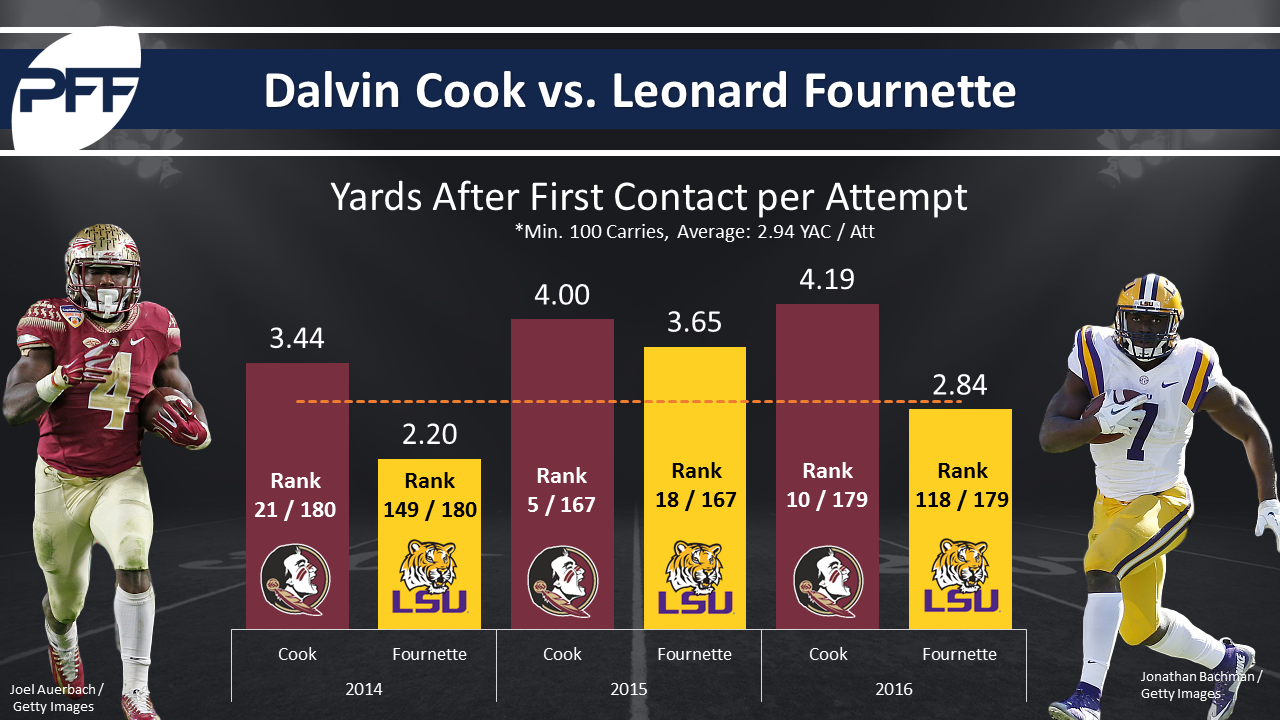 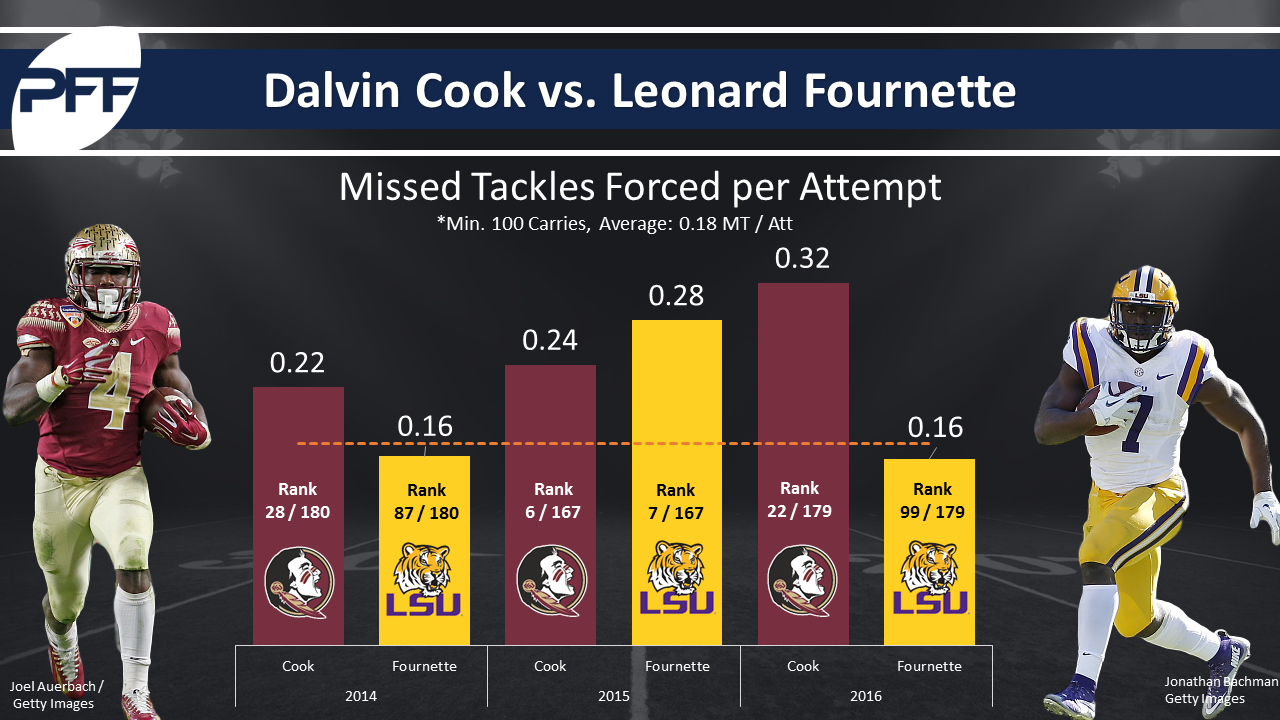 As you can see in the charts above, Cook astoundingly ranked top-30 by each metric in each of his past three seasons, and improved by both metrics in every season. Fournette, meanwhile, only ever topped Cook in missed tackles per attempt in 2015, and was below average by both metrics in 2014 and 2016.

So, it appears, Cook was the vastly superior runner throughout their respective careers, but who was the better receiver? This is question is especially important in today’s NFL.

Fournette has limited experience as a receiver and hasn’t been particularly successful when targeted. He ran only 101 routes last season, as opposed to Cook’s 313. Over the past three seasons, Cook has seen 40 more targets and totaled 423 more receiving yards than Fournette.

Cook is constantly knocked for having poor hands, but I'm not sure Fournette is much better. As a receiver, Fournette’s hands are especially bad. Among all 112 running backs to total at least 50 targets over the past three seasons, Fournette's drop rate of 16.7 percent ranks fourth-worst. Cook's 10.2 percent drop rate, though not good, is far more palatable in comparison. 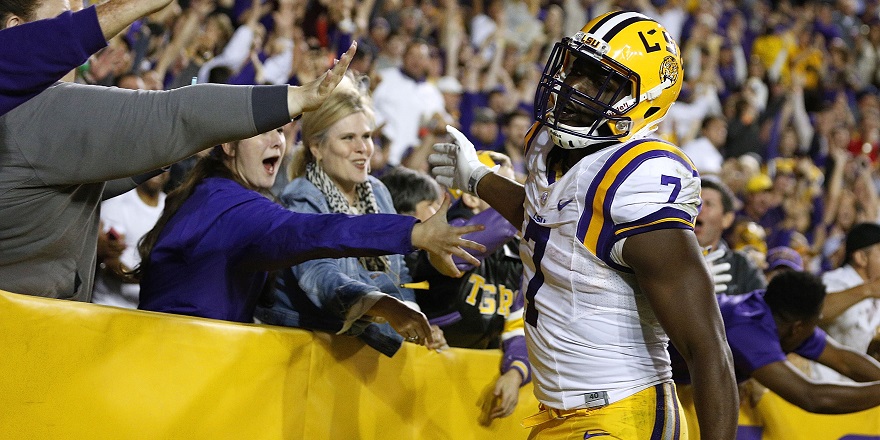 From a real NFL perspective, ultimately, I side with JJ Zachariason in that I don’t think it’s particularly very wise to draft a running back in the first round. From a fantasy perspective, I have Fournette only one spot ahead of Cook in my PPR rankings (RB16 vs. RB17). Tyler Loechner already laid out much of the case against Fournette in fantasy here, but my main concern is lack of usage in the passing game. In the Jaguars’ post-draft press conference, Tom Coughlin did say he thinks Fournette could play all three downs, but he went on to state the importance of having “three good running backs” as well as somebody in a change of pace capacity. He would later make a point to mention T.J. Yeldon, saying he is a “great third-down-back.”

Meanwhile, during Minnesota’s post-draft press conference, GM Rick Spielman said Cook was one of their top two running backs on the board and especially praised him as a receiver. Cook needs to work on ball security and pass protection, but I don’t see Latavius Murray (who averaged 1.6 yards per carry less than his teammates Jalen Richard and DeAndre Washington last season) eating too much into Cook’s immediate workload.

I do think Cook sees more targets, but I have Fournette higher in my rankings due to touchdown upside. Murray does worry me in this department for Cook given his 12 touchdowns last season. At ADP, however, I much prefer Cook, who is currently being drafted 2.5 rounds later in MFL10 best-ball leagues.